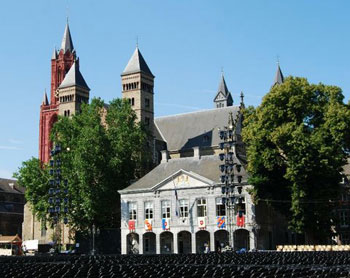 I was sitting in a café in Maastricht, and was rather intrigued by the name. Grand Café D’Artagnan. Of course, I was familiar with the name; the hero of Alexandre Dumas’ trilogy of novels, Twenty Years After, The Viscount of Bragelonne and, of course, The Three Musketeers. Even if you haven’t read the books, the name has been familiar to movie-goers ever since Douglas Fairbanks buckled his swash across the silver screen in 1921.

But, what was the connection with Maastricht?

Further enquiries revealed that he’d been killed here, during the Siege of Maastricht in 1673, during the Franco-Dutch War, and his statue still stands in Maastricht. 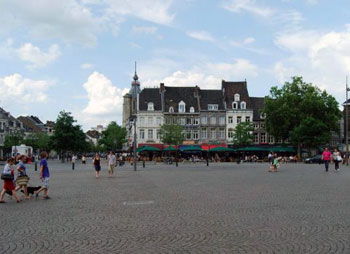 It appeared that he was a real person, one Charles de Batz, who joined the Musketeers in 1632, using his mother’s maiden name, D’Artagnan. There, the resemblance ends, for Dumas fictionalised and romanticised his character heavily.

The city lies on a narrow appendix of the Netherlands, squeezing between Belgium and Germany. Indeed, when the railway first came to Maastricht, the first station down the line to the east was Aachen, in Germany; to the west, Liège, in Belgium. Nearly thirty years were to pass before it had a rail connection with any other city in the Netherlands. 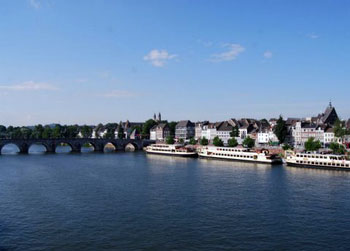 The reason for this is its important strategic position on the River Maas, where the Romans, in their progress across Europe, built a bridge, around which grew a town which they called Mosae Trajectum, or ‘Maas Crossing’, from which the name Maastricht is derived.

The Netherlands, as we know it now, did not exist until 1815; before that, Maastricht changed hands many times. In the Middle Ages, it came under the joint rule of the Duke of Brabant and the Prince-Bishop of Liège, until it was conquered by the Spanish in 1579 during what was to become known as the Eighty Years War.

In 1632, the city returned to Dutch hands, as part of the ‘Republic of the United Netherlands, but only held for less than forty years, before the French took it in the Franco-Dutch wars in 1673. Their troops occupied it until 1678, when it was returned to the Dutch. 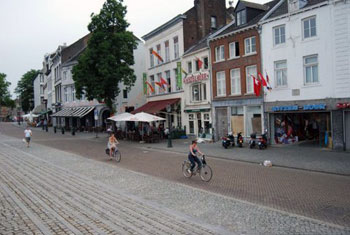 But, the French came again; briefly during the War of Austrian Succession in 1748, and, for a longer time, by the forces of Napoleon in 1794, who regarded it as a part of France until its restoration to the Netherlands in 1815. 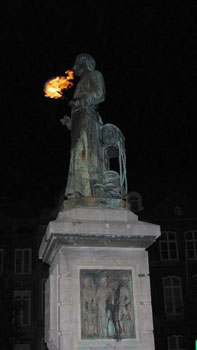 Perhaps it was this central position which led to its being chosen as the meeting place for Europe’s leaders in 1992. They discussed the mechanism by which the European Community became the European Union, and laid the groundwork for Europe’s common currency. At the end of their conference, they signed the Treaty of European Union, better known as the Maastricht Treaty.

Some well-known people made Maastricht their home. One noted citizen was Jan-Pieter Minckeleers, the inventor of the gaslight. His statue stands in the Markt, holding a wand from which issues a gas-fuelled flame.

But, a more famous citizen is the charismatic violinist and orchestra leader André Rieu. Although he tours the world with his Johann Strauss Orchestra, he gives an open-air concert in his home town every year. And the world comes to Maastricht to see and hear him.

He is, the people of Maastricht say, the best thing ever to happen to their city. His fame has spread far further than that of Minckeleers, of whom few people have ever heard. Or, even D’Artagnan!

About the author:
Having written as a hobby for many years while serving in the Royal Air Force, Keith Kellett saw no reason to discontinue his hobby when he retired. With time on his hands, he produced more work, and found, to his surprise, it ‘grew and grew’ and was good enough to finance his other hobbies; travelling, photography and computers. He is trying hard to prevent it from becoming a full-time job! He has published in many UK and overseas print magazines, and on the Web. He is presently trying to get his head around blogging, podcasting and video.