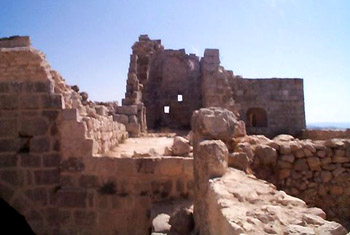 While many visitors come to Jordan to see the Graeco-Roman ruins at Jerash, or the pre-Roman ruins at Petra, there are many remains there from medieval times, too. Some are in ruins, but some are in use even today. 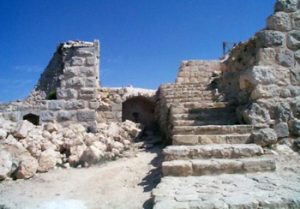 A lot of them are insignificant, barely attracting notice because there are so many. Ajloun is different. Most people visit it on the way back to the capital, Amman, from Jerash. In this case, it’s usually reached in the late afternoon and it just demands exploration, standing on a prominent hilltop, lit by the setting sun, overlooking the trade route it was built to protect all those centuries ago.

And, if you’re really lucky, you’ll hear the sunset Call to Prayer, echoing round the valley from the mosque in the nearby village.

When the first Crusaders left Europe for the Holy Land at the end of the 11th Century, most of their castles were made of wood. When they returned, they brought back several good ideas from the Middle East, and I have a private, uninformed theory that the stone castle may have been one of them.

Consider, too, the similarity of the English word ‘castle’ with the Arabic ‘Qasr’. Possibly some cross-pollination took place, although in which direction, only a serious student can say. And they’ve been known to disagree at times! 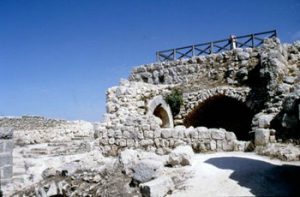 Another thing scholars disagree upon is why the Crusades started in the first place. The version that used to be taught in schools was that the Saracens (= Muslims) under Salah al-Din (Saladin) took over the holy city of Jerusalem, and the Pope of the day gave out that any knight who could shift him was guaranteed a place in heaven.

But, Saladin didn’t capture Jerusalem until 1187, and, indeed, wasn’t even born when the First Crusade was launched. Nevertheless, the Holy Land abounds with stone castles; built by the invading Crusaders and the defending Saracens.

Probably the best known castles are at Aqaba, in modern Jordan, which was extensively rebuilt by the Mamelukes in the 16th Century and Azraq. The latter was in continuous use from Roman times, through the Crusades, when it was held by the Saracens, until the First World War, when it was used as a headquarters by Col. T.E. Lawrence (Lawrence of Arabia) during the Arab Revolt.

Most of the Crusader castles in Jordan, known to Europeans in those days as ‘Oultre Jordan’ (Beyond the River Jordan), were built along the King’s Highway, from Amman to Aqaba. The Saracen castles were built with an eye to trade, as well as defence … and it wasn’t only the Crusaders they were defending against. 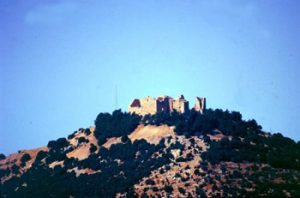 Ajloun Castle was built in 1184 by Emir Izz al-Din Usama, the nephew of Saladin, to protect the iron mines of Ajloun, and the important trade route to Jordan from Syria from the invader.

The Crusaders spent decades trying unsuccessfully to capture the castle and the nearby village. Little wonder; Usama’s castle had four towers with arrow-slits in the thick walls … and that was after the 45 foot wide and 40 foot deep moat had been negotiated. After Usama’s death, a fifth tower and a bridge across the moat added. This bridge, decorated with pigeon reliefs, can still be seen today. The work was halted by an invasion, this time from the east. Mongol warriors captured and destroyed the castle, but were almost immediately repulsed by the Mameluke general, Sultan Baybars.

The Mamelukes were originally Egyptian slaves of the Turks, but grew into an influential military power; indeed , they held the sultanate of the Holy Land from 1250 till 1517, retaining considerable powers afterwards, until overthrown by the Ottomans.

Under Mameluke rule, the castle was rebuilt in the form we see today. It was used to defend the trade routes, as well as being a storehouse for crops and provisions. It also became part of a network of signalling stations and pigeon posts … maybe the reason for the pigeon reliefs in the bridge over the moat … that, it was said, could transmit a message from Damascus to Cairo in only 12 hours.

In the 16th Century, the Ottoman Empire was the ruling power. Founded in Turkey in the early 14th Century, the Empire spread outwards till, at the height of its power, it encompassed the Mediterranean Sea from the western border of Algeria right around to the frontier of Austria. It didn’t completely disappear till 1922, although the British drove the Ottomans from the Holy Land in World War I.

Despite the long Ottoman occupation, things were by no means peaceful. Prince Fakhr ad-Din al Mani II used the castle in his battle with Ahmed ibn Taraby in the 17th Century. But, when the Swiss explorer J.L. Burkhardt, the discoverer for the western world of the Egyptian temple of Abu Simbel, and the Jordanian rock city of Petra, arrived at Ajloun, he found the place peacefully occupied by 40 members of the same family.

Earthquakes in 1837 and 1927 damaged the castle, but the Jordanian Department of Antiquities restored the walls and the bridge to the condition we see today. The castle stands on a hilltop, and can be seen for miles around. That’s also an indicator of a good view, on a clear day. From the castle walls, you can see the Jordan valley, and the northern highlands.

It’s said Ajloun Castle is the best-preserved and most complete examples of Arab-Islamic mediaeval architecture in the world; a maze of vaulted passages and winding staircases, dining halls, dormitories and stables. The water supply came from eleven huge water cisterns, important to Muslims, who must pray five times a day, and cannot do so without washing themselves first. Indeed, in the private quarters of the castle’s Commander is a small stone bathtub, unheard of in an English castle until comparatively recent times. And, the quarters had rectangular windows, with an ingenious arrangement to convert them to arrow-slits, should the need arise.

See a comprehensive list of Jordan tours for individuals and groups.

Independent visitors could take a white-painted ‘service taxi’ from the al-Abdali station in Amman … but be warned that the car will have to be shared, and will depart only when full. 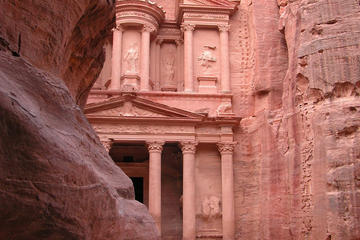