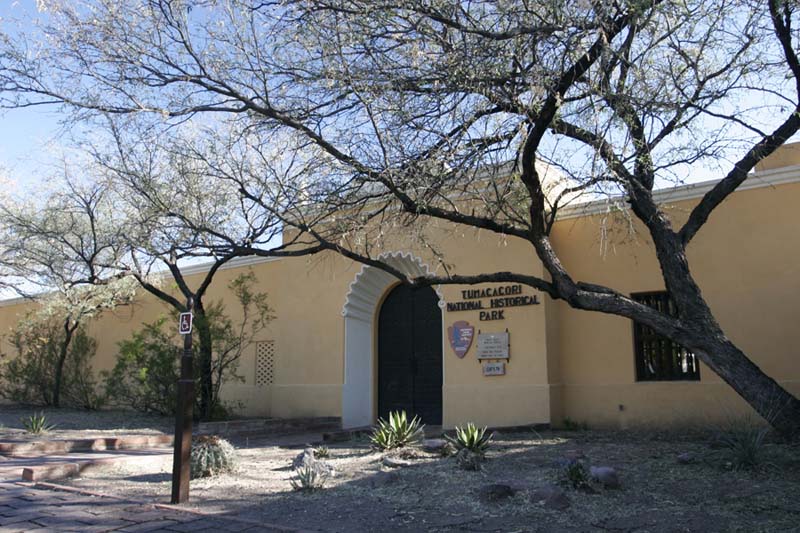 A Fusion of Frontier Cultures

Shafts of early morning light flit across the two-lane paved road like an illusion. The rolling hills of the Santa Cruz Valley are painted in tones of eerie gray. Shadows linger in the ravines.

We arrive at the ruin of Mission San José de Tumacácori (Too muh ka KO re) off Arizona Highway 19 by 7:30 a.m., a half-hour before it opens. Everything is closed, including the restaurant and tourist shops across the street.

The rising light shimmers off the large mesquite trees creating spider webs of shadows out of their twisted gnarled branches. The top of the yellow stucco enclosure wall seems to glow in the warm light. I wonder if what I’m seeing is a momentary illusion of Tumacácori’s shattered past. Founded in 1691 by the intrepid Jesuit missionary and explorer, Fr. Eusebio Francisco Kino, the original mission would serve as the northern most outpost of Spanish Christendom in Arizona for over a century against near insufferable odds of struggle among different cultures in harsh desert conditions. 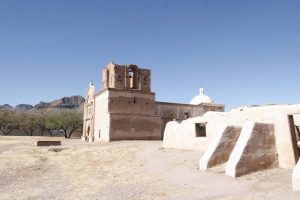 My friend Dick and I wait patiently, watching two big black crows circling overhead. At 8 a.m., we enter. The grounds are empty. The mission church, which was built between 1800 and 1823, stands on the far side of a barren field as it probably looked in 1908 when President Theodore Roosevelt declared Tumacácori a national monument. The massive bell tower and kiln-fired adobe brick walls stand obliquely, silently in the morning light. Time has stopped here as if inhabited by the ghosts, by dreams somehow gone astray. 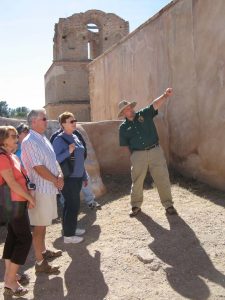 In the garden we meet our guide Wally Mohr, an effusive retiree brimming with ideas. He tells us that the mission was originally founded on the site of a Pima or Akimel O’odham Indian village on the opposite (east) bank of the Santa Cruz River. “Tumacácori is a Spanish phonetic translation of the O’odham name for their village,” he says. “It probably means ‘rocky flat place.’”

The Akimel O’odham, we learn, invited Kino to visit them. “He made Tumacácori into a year-round, self-sustaining community by bringing livestock and fruit trees to the O’odham,” says Wally, pointing at a small pomegranate and apricot tree in the garden. “He learned their language, and treated them with great respect. Unlike most missions, there was no forced conversion here.” 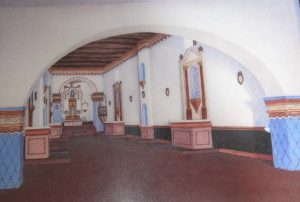 We walk inside to the room with a model of the mission as it probably looked in the early 19th century. Along with the church, it features housing for the O’odham converts, numerous workshops, an irrigation system, a school, granary, cemetery and mortuary chapel, gardens, orchards and fields of beans, squash and corn.

Spanish Catholic devotions and practices were not fundamentally different from the traditional polytheistic beliefs of the O’odham. “When the Jesuits arrived, they brought even more Gods, only called saints. They had the cross, the statues of the saints, the holy water—all symbols of divine presence and intercession,” explains Wally. “The O’odham have a creation story like Noah’s Ark in which a great flood destroyed all the evil people. Their God, I’itoi, who led the first people out of the Underworld, is the equivalent of Jesus Christ.” 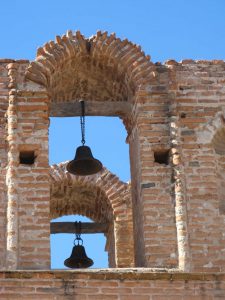 Once outside, I stare again at the church’s pale brown adobe façade decorated with a rich fretwork of pilasters and curved and pointed arches and a lofty redbrick bell tower. Big swaths of white lime plaster cling to the wall. Some of the original paint is still visible under the cornice below the main window. In its day this frontier church must have been a dazzling spectacle of color and architectural elegance; in fact, it still is — a testament to a steadfast communal faith that seems sadly out of step in modern society.

The interior is even more colorful. The lime-plaster walls of the nave are embedded with crushed red brick and decorated with Mexican baroque statuary and carvings of the Stations of the Cross. The walls surrounding the altar and the towering domed ceiling above it are still adorned with traces of the original painted and stenciled devotional imagery. The flickering candles, mosaic of color and images, and sound of choir voices echoing throughout the great hall must have brought tranquility to parishioners, Indian and non-Indian alike. The bonds of faith, born from a higher spiritual purpose, kept them together.

The church regrettably was never completed, stymied by the intractable forces of history. The struggle for Mexican independence from Spain brought chaos to the region and neglect of the missions. Apache raids once again devastated the Santa Cruz Valley. Funds for construction were meager, and epidemics of smallpox took a frightful toll among the children — so great that a new cemetery was created for their internment in 1822. Six years later Tumacácori lost its last resident priest when the Mexican government ordered all Spanish-born residents to leave the country.

Indian converts and a few settlers with the aid of visiting Mexican priests held on for another two decades. During the war against the United States, Mexico could neither defend nor supply the beleaguered mission. Lieutenant Cave Johnson Couts on his way back with U.S. troops from the 1847 campaign in Mexico noted in his journal: 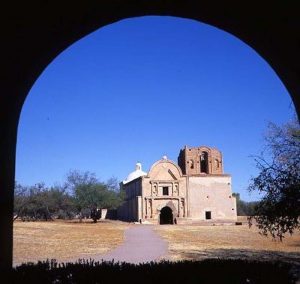 At Tumacácori is a very large and fine church standing in the midst of a few conical Indian huts…This Church is now taken care of by the Indians….No priest has been in attendance for many years, though all its images, pictures, figures, etc. remain unmolested, and in good keeping.

Mounting Apache raids and a bitterly cold winter in 1848 finally drove out the last residents. They carried with them the church’s holy statues, chalices and priestly vestments to San Xavier del Bac, the Tohono O’odham Indian church near Tucson.

More than anywhere else, the cemetery enclosed by high adobe walls around the mortuary chapel tells the mission’s story. There is no trace of mission-era Indian graves – long ago destroyed by weather, treasure hunters, and cattlemen who used the cemetery as a corral. Around 1900, Indian families, who remembered Tumacácori’s past, began to bury their dead once again on this holy ground – campo santo.

Mounds of rocks and old wooden crosses mark the gravesites. A few of them have bouquets of artificial flowers. There are no names; just stillness as the branches of two old mesquites cast a quilt work of zigzag shadows across an adobe wall.

Photos by by Richard Miller and Victor A. Walsh.