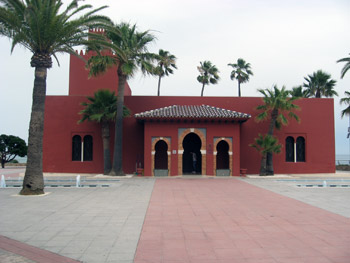 Nearly 3000 years ago, the Phoenicians were interested in Benalmádena for its rich mining resources. Later, when the Moors arrived during the 8th century, the mining industry continued to thrive, particularly in iron ore, ochre, and silver. So significant were these mines that the village was named Banu al-Muddin (Arabic for ‘sons of the mines.’) Benalmádena was one of the first settlements established in Spain by the Muslims and one of the last to fall to the Christians during the late 15th century. 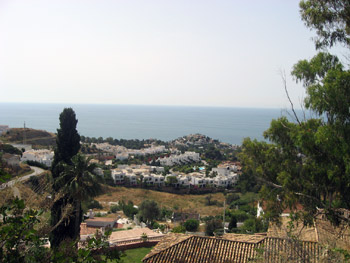 The whitewashed village, lined with narrow cobblestone streets overlooking the Mediterranean Sea, is the oldest of the three as it was founded by the Moors. I was fortunate enough to be in Benalmádena Pueblo in June for the major celebration of Corpus Christi where thousands of locals and tourists gather on the streets to watch the holy procession honouring the Body of Christ. On the eve of this festivity, hundreds of locals congregate to elaborately adorn the altars and decorate their balconies and windows in the brightest coloured tapestries. The community also collaborates in transforming the main street into a work of art by arranging 78,000 vibrant flower blooms in the form of a fabulously designed floral carpet. Meanwhile, the smaller streets are strewn and perfumed with palm leaves, rose petals, lavender, and aromatic herbs such as rosemary and thyme.

The holy procession is led by a priest as he walks under a white canopy followed by an orchestra of drums, trumpets, and flutes that play a solemn march. Young girls celebrating their Communion are crowned with floral garlands and dressed in white gowns as they toss flower petals along the way. Hundreds of spectators follow the procession as the priest blesses the various shrines placed by the locals outside their homes. 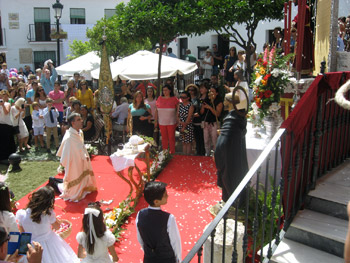 Once the procession was over, I decided to indulge my curiosity by exploring what some have described as “the most beautiful place on earth.” I only knew that the Castillo Monumento Colomares was about a 15 minute walk from the center of the pueblo. However, no indication as to its whereabouts could be found anywhere along the remote area and I began to get discouraged in the blazing heat of the afternoon sun. Fortunately, after asking for directions several times, a cyclist appeared who knew how to get there.

Nearly an hour had passed since I left the pueblo and I found myself gasping in delight when it finally appeared around the corner amidst isolated trees and bushes on a small curvy road. 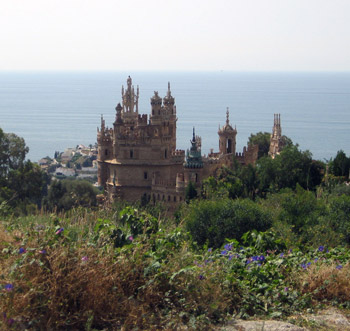 This enchanting structure was built during the late 20th century in memory of Columbus and the Discovery of America. The castle is actually the largest monument in the world dedicated to the Italian explorer. Seven years of work it took with the help of two bricklayers who incorporated several styles of architecture designed by a doctor. The castle, advertised as “a fantasy made by stone”, has 16 points of interest that include Isabella’s Castle, the Oriental Tower, and the Christmas Fortress of 1492. The complex also houses the smallest church in the world as listed in The Guinness Book of Records. The views of the Mediterranean Coast from this hidden gem adorned with decorative fountains, spiral staircases, and ornamental gates are magnificent, and I left wondering why the castle was not better promoted. 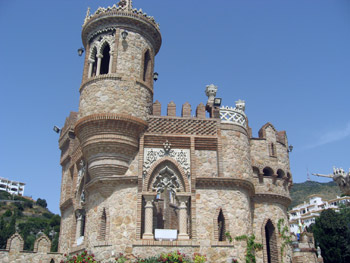 A 20 minute walk from the Colomares Castle is the Mariposario de Benalmádena or “Butterfly Park.” Known as the largest one of its kind in Europe, this tropical garden paradise set inside a Thai temple is home to over 1500 exotic butterflies. More than 150 different species reside here among cascading waterfalls, floral gardens, and tropical plants.

Just across Butterfly Park is the brilliant Buddhist Temple known as the Stupa de la Iluminación. This bright white temple, bejewelled with a golden dome, was inaugurated in 2003 and stands as the largest of its kind in the Western world at 108 feet tall. The structure houses a notable collection of Himalayan art and literature as well as exhibitions dedicated to Tibetan Buddhism. The monument is a sanctuary of higher learning, meditation, and enlightenment as well as a symbol of peace and harmony. 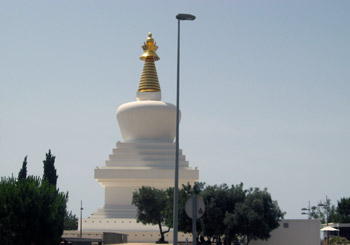 This urban residential town, nestled between the mountains and the sea, is home to several major family attractions and theme parks. Selwo Marina Delfinarium is the only one of its kind in the Andalusian region where you can feed penguins and swim with dolphins and sea lions. Tivoli World is a popular theme park known as the largest on the Costa del Sol. Across the entrance is the Teleférico or cable cars that take you to Mount Calamorro in 15 minutes where you can savour views of the coast and on clear days, Gibraltar and North Africa as well.

Outdoor flea markets are an enjoyable way to spend a morning in Arroyo de la Miel, whether shopping for bargains, souvenirs, or simply people-watching. Two markets or mercadillos are held each week; Fridays by Tivoli World and Wednesdays and Fridays at the wildlife garden known as Paloma Park (Park of the Dove.) 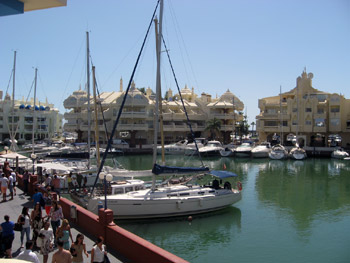 Paloma Park is a vast and serene gated area perfect for an afternoon stroll by the great lake on paved walkways adorned by plants, gardens, statues, and fountains. Peacocks, roosters, geese, ducks, pigeons, doves, and rabbits all call this park their home.

The coast of Benalmádena was rebuilt and expanded during the 1950s as an extension of the pueblo and Arroyo de la Miel to accommodate the future holiday trade. This once small fishing port village is now a major Mediterranean sport harbour town promoted as the ‘best marina in the world.” The award-winning white Arabian-style marina is the largest on the coast with its gorgeous yacht club, expensive shops, quality restaurants, trendy cafes, covered walkways, and boardwalk leading to Torremolinos. 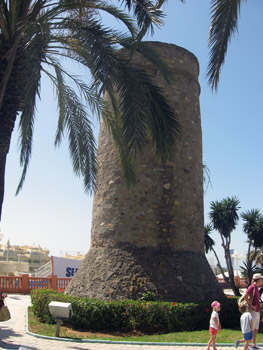 By the entrance to the Marina stands the Moorish lookout tower, Torre Bermeja (Reddish Tower), the oldest of three that remain along the coast of Benalmádena. These cylindrical towers were raised to warn against the enemy ships approaching from North Africa. Although reconstructed during the 16th century, the tower first appears in documents dated to the 13th century. Of 16th century Christian origin are Torre Quebrada (Broken Tower) and Torre Muelle (Dock Tower) in the nearby, namesake suburbs of Torrequebrada and Torremuelle respectively.

Within the sport harbour complex is the marine museum and aquarium known as Sea Life Benalmádena with an impressive glass underwater tunnel where you can get up close to a shark or touch a starfish. The exhibit features over 2000 sea creatures including Asian otters, manta rays of Thailand, and a giant Pacific octopus. 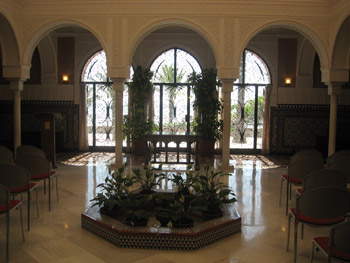 However, the main landmark of Benalmádena Costa is the stunning, burgundy palace known as the Castillo El Bil-Bil. The Moroccan-style structure was built on the seafront in 1930 for a wealthy Spanish-French family. Seven years later it was purchased by an American family who lived here for 30 years. When asking about the curious name, Salvador, the caretaker informed me that the names of the American family were Elsa (El) who was married to William (Bil) and both had a son together also named William (Bil.).

Since 1980, the Neo-Arab style palace serves as a cultural center presenting concerts, conferences, exhibitions, and hosting social events. Most of the civil weddings within the entire province of Málaga are performed here. Salvador mentioned that up to 12 weddings can take place on a Saturday. 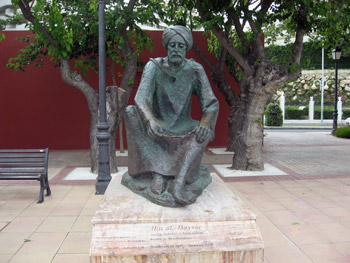 Within the lovely gardens of El Bil-Bil is the monument to Ibn al-Baytar, an illustrious scholar born in Benalmádena during Moorish rule. The commemorative plaque reads in Spanish and English; Ibn al-Baytar – The distinguished botanist and pharmacologist born in Benalmádena: Benalmádena 1197 – Damascus 1248. Al-Baytar became one of the most renowned scientists of the Middle Ages. He is further immortalized and remembered as the most famous personality in the history of Benalmádena.

At least a week is needed to absorb the three flavours of Benalmádena; the spectacular six mile beach, outstanding marina, and popular seafront promenade on the sunny coast; the peaceful and charming old Andalusian village upon the hill overlooking the sea with its fairy-tale castle; and the contemporary city in between the two with its vast parks and amusement attractions that all promise a most memorable holiday.

♦ Benalmádena (pronounced by stressing the 3rd rather than 4th syllable) is easily accessible from Málaga International Airport by a 20 minute train ride on line C1 that arrives at the stop named Benalmádena- Arroyo de la Miel. The train runs every half hour and the current cost is 2 Euros, leaving you right in the center of Arroyo de la Miel.
♦ For more information on Benalmádena visit: www.benalmadena-arroyo.com 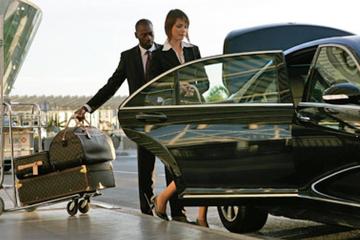 About the author:
Ana Ruiz was born in Spain and is the author of two books on the subject of Spanish history and culture, “Vibrant Andalusia” and “Medina Mayrit; the Origins of Madrid”. www.ana-ruiz.weebly.com