The very best of man was exhibited during the 1984 Olympics in Sarajevo, Bosnia-Hercegovina. After that, for three years (1992-1996) the world witnessed a darker side of man. 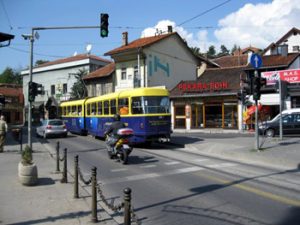 I looked up through the clear blue sky as the commercial jet flew high over the valley. It was 2004 and Sarajevo, Bosnia-Hercegovina was still suffering from the scars of the 1990s war. Progress had been made, buildings rebuilt, and people were moving on with their lives. I had hoped then to come back again one day.

When I return to Sarajevo after a five year absence, I wanted to see what changes had been made since our last visit. We arrive in Sarajevo on a Friday afternoon at the height of rush hour. Movement is slow people are darting in and out of traffic all it seems, hurrying and trying to get home or to their final destination. As we drive on the Appel Quay which follows the Miljacka River past the three bridges the Cumurja, the Latinska Cuprija, and the Kaiser it is like driving in any other large city.

Sarajevo is situated in a valley with the Miljacka River running through it and is surrounded by green mountains forested with trees just beginning to show the various autumnal shades of color. Visible from anywhere within the city homes high on the hills overlooking the city dot the landscape. The sweet smell of wood used for cooking scents the air.

This hasn’t changed much since our last visit, though scenes of destruction are not as prevalent now. Since the war’s end the city has been rebuilding although there are still some remnants and pockets of destruction. Sarajevo is a cosmopolitan city with its various cultures both east and west living together. The architecture is a mixture of Turkish Ottoman and Austro Hungarian that dates back hundreds of years. In the town the many churches and mosques are a symbol of religious tolerance between the Muslim and Christian religions. 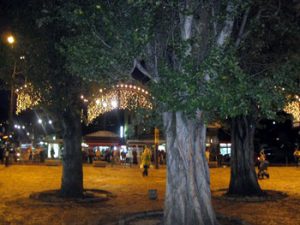 The Bascarsija (old town) is designed in the Ottoman Turkish manner. There is a bazaar with many shops that feature brass metal work, jewelry, leather works etc. Each street is dedicated to a specific craft. Business is conducted in the old way as prospective buyers are expected to negotiate and to haggle with the vendors. It also offers exclusive restaurants, historic monuments, museums and other interesting places to visit all within a short walking distance. We walk through the city and savor the aroma of roasting kebab meat hanging in the air. We spend some time lounging in one of the many cafes, like the residents of Sarajevo enjoying their Turkish coffee and sweet pastries, and take time to just enjoy life.

As we walk toward the old town to explore the changes we are interrupted by a sudden downpour. We duck hurriedly into a bakery, buy sweet rolls and find cover under an umbrella in an outdoor café, where we drink hot tea and people watch.

After attending mass Sunday at the Franciscan monastery across the Miljacka River we stroll through the streets of Sarajevo across Princip Bridge and enjoy the warmth of the sun. It seems that all the inhabitants of Sarajevo are out enjoying the end of Ramadan. Men are dressed in suits and the women wear their Sunday finest. The little cafes and restaurants are busy as people stop for coffee and something to eat. Every now and then we pass groups of musicians and singers entertaining those strolling through the streets.

On its outskirts spanning the Miljacka River is Princip Bridge. It is across from where Gavrilo Princip stood on the corner of the street formally named after the Austro-Hungarian Emperor Franz Joseph when he shot and killed the archduke Franz Ferdinand, the Austrian heir apparent to the throne and his wife Sophie on June 28, 1914, which ignited World War 1. Today there is a plaque on the side of the building where Princip stood when he made that fatal shot. The building now is also the site of a new recently opened museum which catalogues the assassination of the archduke. There are glass enclosed displays on the outside walls with old photographs and videos of the Sarajevo area as it was during that time almost a century ago. 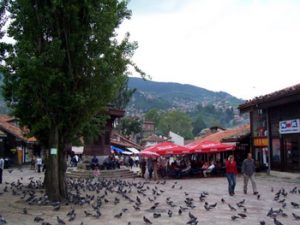 Left over from the war in the 1990’s is a phenomenon in Sarajevo called the Sarajevo Rose. It is a reminder of a place where death occurred by mortar shelling during the war. The Rose is a shell crater filled in with red resin creating what appears to be a flower with several petals scattered around it. Today they are almost gone as the elements are slowly washing them away and now after all these years many have faded and are not as visible. Hopefully time will also help heal the wounds of that war.

Driving in and around in Sarajevo can be hazardous because of the many one way streets. Parking is generally limited to the street or pay parking lots. Sarajevo can be best described as a walking city. For longer distances trams are probably the best way to get from one place to another. They are brightly colored and easy to see, go just about everywhere and are not expensive.

As darkness descends upon the city, it is swathed in lights and the Bascarsija glows with the reflections and shadows that heighten its mystique. In the background the chimes of the bells of the Catholic Church are heard along with the Imam’s “call to prayer” being played from the mosques all over the city. The call to prayer is heard 5 times daily, at sunrise, noon, afternoon, sunset, and evening.

Sarajevo has a lot to offer for either a long weekend excursion or an extended stay. The mountains have a wide appeal for hikers; enjoy some of the splendid scenery of the Zelengora, Volujak, and Maglic mountains in the Sutjeska National Park a very scenic two hour ride from Sarajevo. 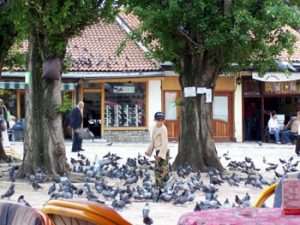 I enjoy the mountains and I like to hike. Based in Sarajevo, Green Visions is an eco tourism and environmental group that specializes in tours of various areas of Bosnia-Hercegovina. Samer Hajric from Green Visions acts as our guide. As we leave Sarajevo, he points out the buildings of the Olympic Village used in the 1984 Winter Olympics. Like a patchwork quilt of varying colors, the apartment buildings are now used by the local inhabitants. The colors now though are not as bright as they were when Sarajevo shone on the world stage that winter long ago.

The landscape turns from the city to the countryside and the mountains loom larger around us as we head up toward the Zelengora (Green Mountain) Mountain. The Sutjeska National Park is one of Bosnia-Herzegovina’s oldest and its untouched wilderness and beauty includes Perucica one of the last two primeval forests in Europe. The Sutjeska River has cut through the rock over time, creating a gorge and carving a valley through the park that divides Zelengora from Volujak and Maglic mountains.

We head up the narrow mountain road that is actually a logging trail and the car bounces as Samer tries to avoid the ruts. It is a slow climb as we exit the car many times to lighten the load in order to avoid bottoming out on the tree limbs and boulders, and guide Samer around the large ditches. We leave the car at the end of the trail and pick up the slightly worn pathway. We walk slowly around the clear blue green lake and head further up the mountain. We pass a red sign that warns of possible mines in the forest. We stick to the trail and climb over the rocky ground higher and higher up the mountain until after an hour or so we reach the edge of the canyon at trails end. We are at the apex of Zelengora and it is over 2000 meters high. I look out over the mountains and valleys to the road down below that snakes through the Sutjeska canyon. In the distance the cumulus clouds hang high over the massive rock granite peaks of Volujak and Maglic mountains. The panoramic view is worthy of the long ride and strenuous effort to reach the top of the mountain. 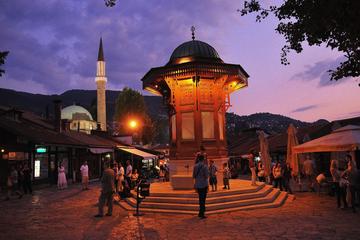 Sarajevo: The City of Charm – Private Tour from Dubrovnik

There are no direct flights to Sarajevo, Bosnia and Hercegovina, however most American airlines offer numerous flights from the United States to Europe with connections to Sarajevo. Round trip fares average $1,000.00 to $1,500.00.

Where to stay: The following hotel information is available on the Internet. Restaurants can be found by asking hotel personnel, by taking a tram, and or walking around Sarajevo especially in the Bascarsija. Another useful source of information is the Bradt Travel Guide

Where to eat: Pizza is almost as much of a staple in the Balkans as it is in the United States. I noticed how popular it was when we first visited Slovenia. Pizza is not made the same way as in the United States. In this part of the world, usually the crust is usually thinner and the toppings and combinations are different. European sausage has a different taste and of course there are many types of sausages depending on the country visited.

Barhana, Dulagina Cikma 8 in the Bascarsija. We visited it on a cold drizzly night and its good wholesome food took the chill out of our bones. 033 447 727.

Cevabdzinica Zeljo, street Kundurdziluk 18, in the Bascarsija. This seems to be the favorite place for locals to enjoy a “healthy” meal of cevapcici, which is ground beef shaped into rolls and grilled, then served with onions, sour cream and pita bread. Price less than 15 Euro.

About the author:
Larry Zaletel is a retired Government Auditor, freelance travel writer and an avid and dedicated traveler.

Photo credits:
All photographs except for the first one are by Larry Zaletel.