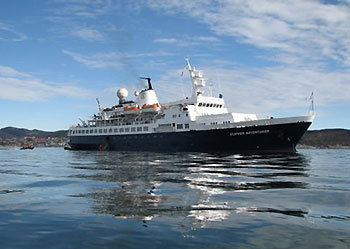 None of us expected our voyage to make history, not when we boarded the Clipper Adventurer in Kugluktuk (Coppermine), near the west end of the Northwest Passage. True, our cruise was billed as an expeditionary adventure. But we numbered roughly one hundred and twenty, most of us were over sixty, and we were sailing in comfort if not luxury: white linen tablecloths in the dining room, a well-stocked bar in the forward lounge, and a staff of expert presenters that included scientists, Inuit culturalists, and authors Graeme Gibson and Margaret Atwood.

Hundreds of ships had plied these northern waters since the early 1800s, when the British Admiralty began to chart the Arctic archipelago while seeking a trade route across the top of North America. So nobody even dreamed of achieving a first of any kind. We forgot that climate change has made a difference. We did not anticipate that this year, the Arctic would have the second lowest extent of sea ice in recorded history. We did not expect that, according to the American National Aeronautics and Space Administration (NASA), the pack ice would reach its least extent just as we arrived in northwest Greenland. 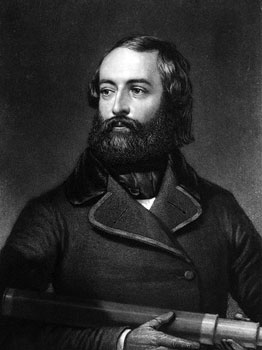 But on September 10, one day after it did so, we sailed into Rensselaer Bay, where in the mid-1850s, explorer Elisha Kent Kane spent two terrible winters trapped in the ice. And three days after that, as on Day Thirteen of our voyage we approached the island town of Upernavik, I went to the bridge. As the staff historian, I needed to announce the surprising news.

By now, everybody on board knew that we had reached a latitude above 79 degrees. We had achieved a “farthest north” for Adventure Canada, which regularly runs voyages like this one into the Arctic. Everybody knew that, although a number of explorers had traveled by dogsled in this region, very few ships (if any) had entered Rensselaer Bay since 1853, when Kane got trapped there in the Advance. And everybody knew that in 1855 — decades before Ernest Shackleton made his name with a spectacular, small-boat voyage in the Antarctic — Kane led sixteen men in an extraordinary, 980-kilometre escape along the Greenland coast. 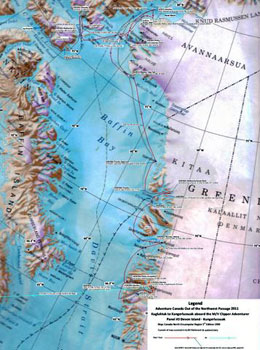 What drove me to the bridge was that our voyage had just become the first to trace Kane’s escape route from Rensselaer Bay to Upernavik, where Danish settlers welcomed the explorer, and now their posterity welcomed us.

Nobody would describe this as an epochal achievement. Nobody would call it Big History. Yet those of us on board found it thrilling, even though we had done the deed in a double-hulled, state-of-the-art ship that dwarfed Kane’s vessel: the Clipper Adventure is four times as long as the Advance (101 metres compared with 26) and thirty times as heavy (4,376 to 144 tons).

Our voyage had begun with a reversal. Originally, out of Kugluktuk, we had been slated to sail west and then north through Prince of Wales Strait to Winter Harbour on Melville Island. There, in 1818, explorer Edward Parry spent a signal winter, and in 1909 Joseph Bernier asserted Canadian sovereignty over the entire Arctic archipelago. 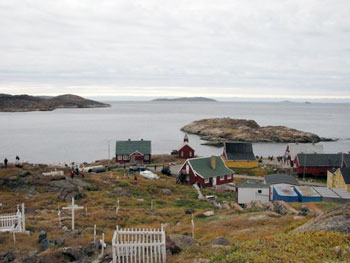 The change gave us extra time. We hoped now to sail north through Smith Sound into Kane Basin. Perhaps we could reach Etah on the west coast of Greenland, situated at a northern latitude of 78 degrees 18 minute 50 seconds. Etah was as far north as Adventure Canada had yet ventured along “the American route to the Pole.”

During our first attempt to enter the Sound, however, on Day Nine, we ran into heavy weather and retreated behind some Greenlandic islands to calmer waters. The storm passed, and on Day Ten, under clear blue skies, we sailed through Smith Sound . . . all the way to 79 degrees 3 minutes 45 seconds. We had set an Adventure Canada record.

More importantly, as I told anyone who would listen, we were now north of Rensselaer Bay (78 degrees 37 minutes), where Elisha Kent Kane survived his two-year ordeal by forging an alliance with the Inuit of Etah, 80 kilometres south. We sailed into that Bay — Kane named it after his ancestors — and dropped anchor. 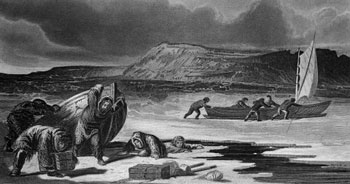 While most voyagers went ashore in zodiacs to explore beaches and ridges, five of us — an archaeologist, a geologist, an artist-photographer, an outdoorsman, and an author-historian (yours truly) — spent three hours searching small rocky islands for relics of Kane’s expedition. We found what I believe to be the remains of his magnetic observatory. And from the zodiac, prevented from scrambling onto slippery rocks by a receding tide, we spotted what I believe to be the site on “Butler Island” where Kane buried the bodies of two of his men.

Probably, those bodies are still there in the rocks, preserved by the permafrost. Nobody is known to have disturbed them. Certainly, Inuit hunters have roamed this area, and in the early 1900s several explorers — among them Robert Peary, Frederick Cook, and Knud Rasmussen — led dog-sled expeditions in this region. But all these had their own objectives. 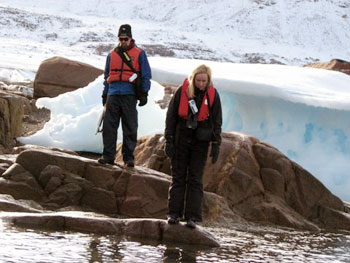 Ice conditions here have always been difficult and unpredictable. And in recent decades, recorded visits have been few. A 1984 article in Arctic magazine describes a study undertaken by scientists who helicoptered in from the American airbase at Thule to investigate the long-term decline in the caribou population. And an exhaustive archaeological study of northwest Greenland by John Darwent and others, detailed in Arctic Anthropology in 2007, turned up 1,376 features, including winter houses, tent rinks and burials — but sought and discovered no bodies in Rensselaer Bay.

But at this location in 1855, Kane abandoned the Advance (we found no trace of the ship). He and his men spent one month (May 17 to June 16) transporting supplies and hauling three small boats 80 kilometres south across ice to Etah. On the Clipper Adventurer, sailing through open water and occasional icebergs, we covered that distance in a single night. Next morning, after an eight-kilometre zodiac ride into the spectacular Foulke Fiord, we went ashore at Etah. 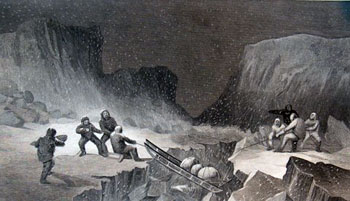 In Kane’s time, Etah was a permanent Inuit settlement, home to several extended families. Today, it serves as a temporary hunting camp. We stayed six hours and hiked to Brother John Glacier, a natural wonder that Kane, oblivious to Inuit nomenclature, named after his dead sibling.

Here at Etah, having reached open water, Kane said a fond farewell to his Inuit allies. With sixteen men (one had perished along the way), he piled into tiny boats and began a 900-kilometre voyage to Upernavik. He and his men spent seven weeks in those open boats (June 19 to August 6), battling blizzards, icebergs, and near starvation. 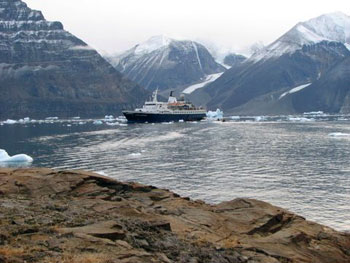 On the Clipper Adventurer, dining variously on Greenland halibut, veal marsala, and braised leg of New Zealand lamb, we retraced Kane’s perilous voyage in two days. We called in at Cape York, where the explorer overcame a last great barrier of protruding shore ice, and from there gazed out over open water.

On arriving in Upernavik, today a bustling town of 1,100, we explored the buildings, now a museum, where Kane and his men stayed for a month before leaving on a Danish supply ship. We had lost nobody to scurvy or frost bite. We had suffered no amputations. But many of us found ourselves marveling anew at the great escape of Elisha Kent Kane. And we savored the knowledge that, as the lucky first voyagers to retrace his escape route from start to finish, we had in a modest way become part of exploration history.

Adventure Canada: www.adventurecanada.com. Ontario-based company offers a changing itinerary of Arctic expeditions. In 2012, highlights include two voyages in the Northwest Passage that can be combined or taken separately, starting from $7000.

About the author:
Ken McGoogan is the author of ten books, including Race to the Polar Sea: The Heroic Adventures of Elisha Kent Kane. He teaches nonfiction writing online through University of Toronto and the New York Times Knowledge Network. Learn more at www.kenmcgoogan.com or www.nytimesknownow.com/index.php/ken-mcgoogan.

Photo credits:
Contemporary photos are by Sheena Fraser McGoogan. The map is courtesy of Bill Bialkowski. Historical photos come from the personal archive of Ken McGoogan