As we passed along a dirt road that would put a 4-wheel drive to shame, I conjured up an image of Egypt and the Nile in my mind’s eye to contrast with my Peruvian surroundings. This picture abruptly evaporated when the taxi hit a large bump. Outside the window, the nearby Supe River, straddled by lush fields of corn and onions, meandered over a dry desert terrace like a giant ribbon adorning surprise package. For over four millennia, this “surprise package” contained a hidden secret – the lost city of Caral. First discovered in 1948, the site, hidden under a sea of sand dunes, was not excavated until 1994 because it appeared to lack many of the typical artifacts usually found in this part of the world. 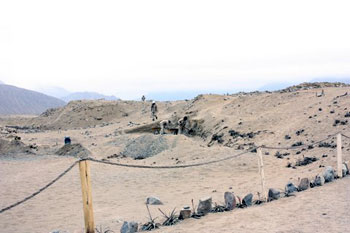 Caral, an abandoned city eroded by time and windswept sand, holds twenty-five structures including six pyramids that are as old as the Step Pyramid in Egypt. More remarkably, this early civilization developed in complete isolation without the use of pottery, metalwork or writing, unlike its contemporaries in the ancient Near East.

The dust of the ages quickly coats your shoes between the parking lot and the ticket booth where you meet your archeologist-guide. Julio Sandoval, an archeologist who had been digging at Caral for the last seven years, indicated that this is still an active dig site and that only about 40% (66 hectares) has been excavated to date. This city, with a population of approximately 3000 at its zenith, was divided into an upper section where all of the pyramids and residences surround a central plaza and a lower section which is organized along one street.

Julio informed us that we are not permitted to climb any of the pyramids and directed Diane and me along sandy pathways defined by small rocks to the Gallery Pyramid. The nine-tiered Gallery Pyramid, the third tallest at 18.59 meters, is named for the gallery decorated with niches at its summit. Parts of this pyramid date back to the earlier period of Caral when the retaining walls forming each layer of the pyramid were constructed from large tree trunks plastered with wattle and daub.

Among the artifacts discovered in the Gallery Pyramid was “quipu”. Quipu is knotted cotton string that served as a record keeping system. Caral’s knot system was relatively simplistic but the Incas would develop a more complex one over three millennia later. Perhaps the Caral system was a precursor to that of the Incas? 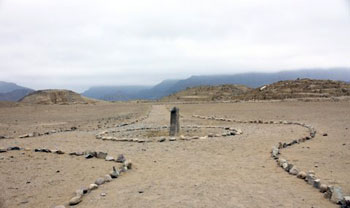 Just across the plaza, the Huanca Pyramid, named for the nearby 2.15 meter high huanca stone whose edges are oriented to the cardinal directions, holds three rooms atop its 12.8 meter summit. These rooms may have been used for astronomical and ceremonial purposes.

The six platforms of the Huanca Pyramid consist of stone retaining walls with rock filler set inside. Stone walls are characteristic of the later period of Caral. The filler was packaged in “shicra” bags (sacks made from woven weeds). These rock-filled sacks served to stabilize the stone walls during an earthquake. Workers would fill the sacks with stones and carry them on their shoulders to the construction site from quarries over a kilometer away. The arid climate has preserved the shicra fibers down to the present day, making then a ready source for radiocarbon dating studies. The reeds and therefore the city date to 2627 BCE. 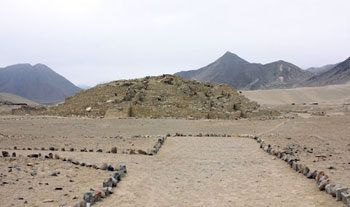 En route to our next destination, the Greater Pyramid, I fought back a sneeze as a sudden gust of wind raised a cloud of dust. Seen through the haze, the Greater Pyramid is the largest structure on site covering approximately four football fields. From a height of 19.27 meters (seven platforms), city officials oversaw all of the activities within the city.

Those who climbed the pyramid first had to pass through a sunken circular plaza at the base. This circular plaza resembles a wading pool even though there is nothing to suggest that water was ever present inside.

Not everyone who climbed the pyramid descended after. Julio indicated that the mummy of a young man approximately 25 years of age was discovered amongst the construction fill in the ceremonial room at the summit. Most notable was that no fingers were attached to the desiccated corpse. These were found in nearby niches where they had been individually buried. According to Julio, all of the pyramids at Caral were used for religious and ceremonial purposes rather than tombs so this mummy was likely a sacrifice. Given the city’s isolation and that no weapons of war have ever been on site, this victim does not appear to be a prisoner-of-war. 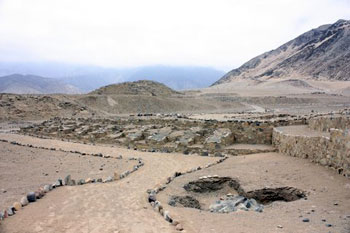 After making quick stops at the Lesser Pyramid, Quarry Pyramid and Central pyramid, we returned to the lower section of the city to visit the Temple of the Amphitheater. Julio directed us to a bank of twelve cubicles lining the entry platform that once held the remains of burnt food offerings.

The Temple of the Amphitheater features a sunken circular plaza with tiered seating. Constructed of cut stone, this plaza was a place of animal sacrifice to Pachamama, the Andean goddess of mother earth. My imagination stretched across the sands of time to a group of dancing musicians as Julio mentioned that 32 condor and pelican bone flutes and 37 deer and llama bone horns were uncovered here. 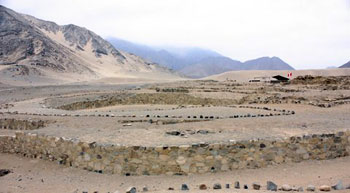 Deeper inside the temple complex is the Altar of the Sacred Fire. This cramped round space houses an altar with a two-level fireplace; an air duct runs beneath. This room was likely used for mysterious ceremonies that the general public was not privy.

Caral was continuously upgraded for almost 600 years. Unlike our modern civilization, residents did not destroy their older buildings. Instead these were remodeled using additional earth and stone. Reconstruction was already well underway even as the Great Pyramid at Giza was being built.

Eventually the end came for the city, possibly because of drought. Around 2100 BCE, Caral was abandoned to history and the inhabitants departed for more fertile areas of country and perhaps founded other civilizations as they went.

Caral is approximately 200 kilometers north of Lima.
Diane and I visited Caral with Pivian Tours.
Alternatively you can travel by bus from Lima to Huacho and then hire a taxi to bring you to Caral. The site is isolated so you will have to ask the taxi to wait until you are finished your tour.
Bring suntan lotion, a wide brimmed hat, comfortable shoes and a bottle of water.
Visit my Peru webpage at www.plan-a-dream-trip.com/peru.html

Photographs:
All photos are by Diane Gagnon. A freelance photographer, Diane has traveled extensively in North America, the Caribbean, Europe and parts of South America. Her photographs have accompanied Troy Herrick’s articles in Live Life Travel, Offbeat Travel and Travel Thru History Magazines.
1. Gallery Pyramid
2. Archeologists at Work
3. The La Huanca Stone
4. Pyramid Of La Huanca
5. Alcoves at the Temple of the Amphitheater
6. Amphitheater at the Temple of the Amphitheater