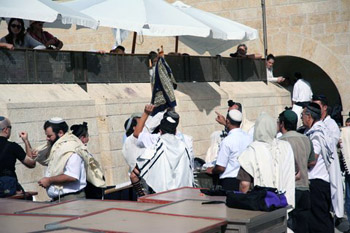 Israel holds a special place in my heart and in my travel experiences. I have been there many times and each uplifting experience has proved to be both crucial and miraculous in my life. As I say the blessings and light each candle on the menorah this Chanukah, I attribute a miracle to each flame burning brightly, illuminating “My Israel Miracles”.

Hanukkah is celebrated for eight days and nights, starting on the 25th of Kislev on the Hebrew (lunar) calendar. This year, the first candle is lit at sundown on December 21st. The word “Hanukkah” means “dedication” and commemorates the rededication of the holy Temple in Jerusalem.

In 168 B.C.E. Antiochus, the Greek King of Syria, outlawed Jewish rituals and ordered the Jews to worship Greek gods and seized the temple dedicating it to the worship of Zeus. Some Jews obeyed, but most didn’t. In a town near Jerusalem, Greek soldiers gathered the Jews, insisting they bow to an idol and eat the flesh of a pig, both forbidden. When Mattathias, a Jewish High Priest, was commanded to participate, he refused. Another Jewish villager volunteered in his place. Outraged, Mattathias took his sword and killed the man. Then, along with his five sons, they killed the soldiers and fled into the nearby mountains.

Later, when Judah Maccabee and his soldiers went to liberate the holy Temple, they found it totally desecrated, with many ritual objects missing or broken, including the menorah. They cleansed and repaired the Temple, but when they went to light the menorah as a re-dedication ceremony, all they found was a small flask containing enough oil to light the menorah for a single day. Miraculously, the oil lasted for eight days. 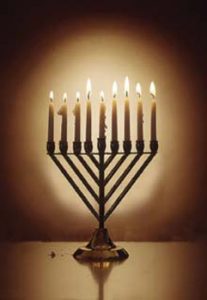 Today Jewish people around the world celebrate Hanukkah for eight days, lighting the “chanukiah”, the 8 branched menorah with the 9th taller “shamash” used to light the others as a servant candle. Each evening, the candles are lit, like reading Hebrew, from right to left, adding an additional one each day. It is customary for Menorahs to be in visible in the window, commemorating the eight-day miracle. When Jews kindle the Chanukah lights, it is natural to think about the role of miracles in our lives.

To me, Israel itself is a land associated with great miracles. The first miracle was in 1948, the year that Israel became a nation against all odds. The second miracle was in 1970 when I was accepted to go to study in Israel for my Junior year at Hebrew University. Before I started my Ulpan (intensive Hebrew), I got a job selling tours. When students from North America arrived in Israel they could see the attractions, but also what life was like for youths their own age, where almost everyone served in the army before they could start university, and they could go back understanding the reality there. It was on one of these “Scout the Land Tours that I fell in love with Israel and I met Sam, the love of my life.

Israel is a small country that spans a long history. Israel is a country blessed with people of all religions and nationalities. I celebrated life cycles in Israel, immersing myself in the festivals: agricultural harvest festivals, religious holidays of the new year and day of atonement, Purim was a costume party celebrating our survival, a poignant Remembrance Day followed by joyous Independence Day. At Passover, my whole family came to visit me. I celebrated the miracles of Chanukah where they started.

Israel is a country where each step represents lifetimes of cultural experiences, ancient and rich. The spirit of the people is palpable, especially in the old city in Jerusalem with its four quarters: Jewish, Muslim, Christian and Armenian. Commerce and proximity demands acceptance of all cultures and religions as you pass seamlessly from one to the next. The aromas, visuals and cacophony of cultures collide, yet blend in perfect harmony.

I experienced the third miracle when I visited the ”Yad Vashem, the Holocaust Remembrance Museum” with Sam’s parents who had been born in Poland and were some of the few who survived the war. Sam’s mother was sent to join her sister in a forced labour camp; spared by her family’s candy making skills, and good fortune. Sam’s father had been in several concentration camps including the dreaded Auschwitz. He showed me by jumping on the map of the camps. His story was miraculous because he had been called into the gas chamber and was recognized by someone from his town who told him not to take off his clothes, and instead pick up a broom and sweep like his life depended on it. It did. Auschwitz was liberated two weeks later. 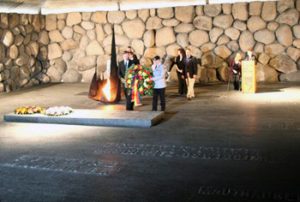 The fourth Miracle happened twenty years later on my daughter’s thirteenth birthday. We decided to have her Bar Mitzvah in Israel, on top of Masada, the famous site of Jewish resistance. In the heat of the desert, past Qumron, where the Dead Sea Scrolls were found, with vistas of the Dead Sea on one side, and the faint remnants of army camps outside the fortress walls, we ascended to the top of Masada surrounded by family, friends and total strangers. As we stood in the middle of what was the ancient synagogue and gazed beyond the endless desert towards Jerusalem, the direction all Jews face when they pray, I experienced history and religion merge in front of my eyes. As I listened to the centuries old prayers, I understood about the sacrifices we sometimes must make to protect our freedom.

When I was invited back to Israel with a group of travel professionals, the fifth miracle occurred. The tour, which was a blend of Jewish and Christian history, offered a smorgasboard of historical and religious slants. Our overnight at a kibbutz in the north became something out of an evening news report. The kibbutzniks were edgy and nervous. We were restricted to certain buildings and finally told to stay inside where we spent a restless night. In the morning we learned there had been an attack from the nearly hills where terrorists had used hang gliders to ambush an army base and killed several soldiers. We were so close, we could actually see one of the hang gliders that had crashed into the hill by the kibbutz where we were just hours before.

The sixth miracle manifested itself during a cruise where we visited the Pyramids in Egypt, which played a large role in Passover, the exodus from Egypt. As we sailed in and out of the Port of Haifa, a model city of peace amongst the Arab, Jewish, Druze and Bahai population, I noticed that the ship was surrounded by Israeli frogmen to ensure our safety. I thought about all the Jewish refugees who had been turned away from these same shores during and after World War II, and how easy it is to take for granted safe passage, from country to country.

The seventh miracle happened during the Intifada. Tourism to Israel was reduced to a brave trickle by the threat of violence, Israeli products were boycotted and professors shunned like pariahs. If I could not encourage tourism to Israel, I was determined to show support for Israel and its academics. Believing the “Word is mightier than the Sword”, I created Hebrew University at Sea; a Baltic cruise with Jewish dialogue and shore excursions. It was intimidating at first, but for the participants, it became an affirmation that learning should never by stifled. 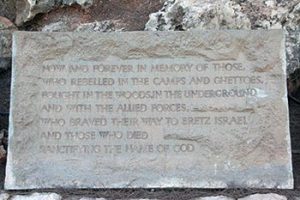 The Jewish Museum for Remembrance of the Holocaust, Yad Vashem has created a special recognition for every non Jewish person who by putting their own lives in danger, helped save Jewish lives. The eighth miracle is the untold story about Muslims who saved Jews. A remarkable photo exhibit about these Albanians opened at the museum November 1st, 2007. I met ordinary, extraordinary people from Albania and Kosovo who risked their lives for strangers and their code of honor. For almost 60 years, due to the stifling communist regime, no one knew that Albania (70% Muslim), had not only rescued every Jewish person within their borders, but had miraculously sheltered ten times the original population. Albania enabled Jewish survival with false passports and secretly crossed borders. Whole villages turned a blind eye to their “guests” who posed as Albanians. This strong code of ethics is based in the ancient oral code of the Kanun and its principle of Besa that stresses protecting those in need. At the museum, I witnessed the unforgettable reunions of rescuers and rescued and their gratitude to Norman Gershman and his Eye Contact Foundation whose mission is to use art as the primary form of expression, in order to break down stereotypes and build upon the deep roots of humanism that cross racial, ethnic, religious and national boundaries.

The ceremony at Yad Vashem was unprecedented. Since then, exhibits have been shown in the United Nations, New York, Connecticut, Washington, DC and in the UK. In 2009, exhibits will be shown throughout Israel and from Buenos Aires to Stockholm and other parts of the world. The book “Besa: Muslims Who Saved Jews During World War II” by Syracuse Press, is attracting worldwide attention. In 2009, the documentary movie called “God’s House”, about the Muslims who saved Jews during WWII, should bring this story to life on the big screen and has been made with the support of Jews, Christians and Muslims.

The Shamash, the 9th “servant” candle used to light the others, represents “service” and a responsibility to stand tall and take action to ignite the potential of others. These “miracles” are symbols of hope and promise for the future and will brighten my Chanukah being spent far from home.

While Chanukah is customary a children’s gift giving holiday, the greatest gifts are to ensure all children have loving families, safe homes, health care and the education they need to thrive. Chanukah foods reflect the miracle of oil: latkes (potato pancakes)and jelly doughnuts; special songs of miracles, and games where coin shaped chocolates or real coins,”Gelt”, are prizes. Games include spinning the Dreidel – a “top”. The four letters on the dreidel represent four words “Nes Gadol Hayah Sham” – Literally: “A great miracle happened there.” In Israel, the last word “Sham” is changed to “Po” which means “here”. “A great miracle happened here.”

Masada and the Dead Sea Day Trip from Jerusalem

About the author:
Randi Winter epitomizes Passionate Travel. As a journalist, she offers combines her interests and passions with travel, focusing on the destinations wow factor, translating dreams into experiences. She believes travel is enlightening, enriching, and inspiring. It opens doors and minds, stretches our imagination, and enlivens our spirit.
For more information contact:
Randi Winter
Specialist in and Journalist of Inspired Pursuits
Passionate Travel / A Virtuoso Affiliate of The Travel Network
Director of The Eye Contact Foundation
Director of Vancouver Downtown Jewish Community
Randi@passionatetravel.com
www.passionatetravel.com

Photo Credits:
All are photos by Randi Winter.