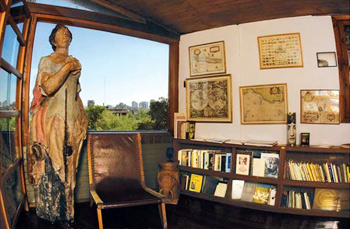 So through me, freedom and the sea
will make their answer to the shuttered heart.”
– Pablo Neruda, The Poet’s Obligation. 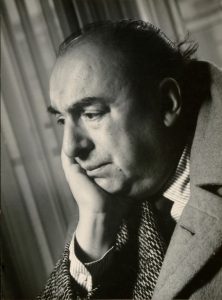 I learned about the poet, Pablo Neruda, from a Chilean friend who brought me books of Neruda’s poetry. I didn’t dream that one day I would visit Neruda’s houses in Chile. My friend, exiled from his homeland after the military junta, always longed to return to his homeland but unfortunately passed away from cancer. So it was I who would go to Chile to explore the poet’s familiar haunts.

Born in 1904 in Parral, Chile, Neruda’s real name was Neflato Ricardo Reyes Basoalto. He published his first poem at the age of thirteen and by the time he was in his early twenties was a regular contributor to the literary journal “Selva Astral” under the pen-name of Pablo Neruda. He chose the name “Neruda” in memory of a Czechoslovak poet, Jan Neruda.

Pablo Neruda won the Nobel Prize for literature in 1971. His poetry is the soul of Chile and he played an important role in Chile’s recent history as a political icon and one of Chile’s national heroes. His picture appears everywhere alongside that of the late president, Salvadore Allende and the renown folk singer, Victor Jara who were brutally murdered by the military during the 1974 junta.

When I arrived in Chile, my first stop was Santiago. It’s an impressive city. The grand colonial architecture of the Plaza de Armes is a contrast to the ultra modern high-rises of Barrio Las Condes, Santiago’s financial district. A sleek modern metro system makes it easy to get around. My first stop would be Barrio Bellavista, where Neruda’s house, La Chascona, is located in the bohemian district.

A walk through Barrio Bellavista is pleasant, with craft shops and sidewalk cafes where the young folk from the local university congregate. It’s a community of artists, writers and craftsmen. The streets are shaded by trees and there are interesting shops and buildings. I found an artisan’s market and jewelry shops full of lapis lazuli. (Chile has major deposits of this semi precious gem.) The sidewalk cafes are lively with the chatter of students from the nearby university. 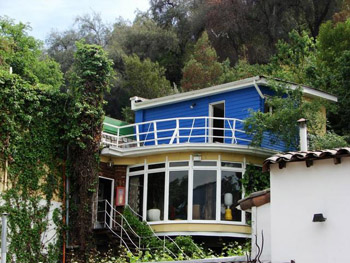 It wasn’t difficult to find the poet’s house, La Chascona, on a little back street set on a hillside overlooking the city. “La Chascona” means “wild hair” and the house is named after Matilde, his third wife, who had a tumble of unruly tresses.

When he was young, Neruda was awarded a diplomatic post and his subsequent travels brought him international fame. Despite his Leftist beliefs, he had a flamboyant life and was friends with artists such as Pablo Picasso and Diego Rivera whose painting hang in his houses. As a diplomat and ambassador for Chile, Neruda travelled to many countries. He collected mementos of all his journeys and these souvenirs, everything from ash trays to primitive carved masks from the South Pacific and Africa, decorate the rooms.

Neruda was fascinated by the sea, although he didn’t like to sail on it, and each of his houses are built in a ship motif. He even wrote his poetry in blue and green ink, sea colors. Some of his hand written poems are on display as well as his books. My favorite collection is Twenty Love Poems and a Song of Despair, and what a thrill to see the original publication of it in Neruda’s library collection!

Until the military coup, La Chascona used to be crammed with Neruda’s treasures. The military ransacked the house and partially burned it. Restorations have been made, but many of his precious collections were destroyed. What is left is an amazing assortment of curios and whimsical items. The house has tiny rooms, so only a few people at a time are allowed in with a guide who explains everything in a most enjoyable and informative way, telling little anecdotes about the poet who was a fun loving and whimsical guy just as he was a serious political and literary figure. The Neruda Foundation maintains the house and has its headquarters there. 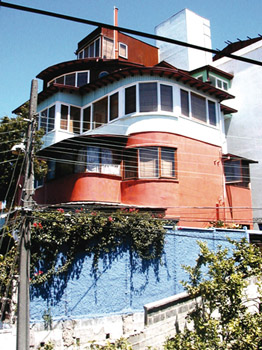 On the coast at Valparaiso, the second of Neruda’s houses, La Sebastiana, is set high on one of Valparaiso’s many steep hills commanding a view of the harbor. I took an ascendor from Espirito Santo up Cerro Bellavista where the house is located. I wended my way through the maze of narrow lanes, past a colorful hodge-podge of houses and eventually found the poet’s house.

Neruda didn’t spend as much at La Sebastiana as he did at his other two houses, but he always went there for New Years to watch the annual fireworks from his lookout. The house, which was built by an Italian carpenter named Sebastian (for whom it was named) was, Neruda said, ‘a poet with wood’. Like the other houses it follows his style of the eccentric layout and the ship motif. The first floor was owned and occupied by two of Neruda’s friends and the ceiling murals and beautiful stone mosaics were done by the woman, who was an artist. In the lobby are two paintings by Neruda’s second wife, who was an artist twenty years his senior. 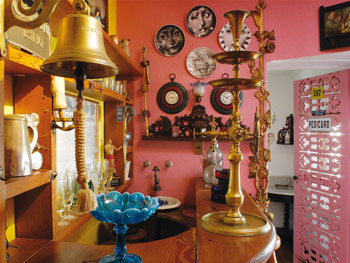 Neruda’s living quarters were on the second floor, ascending several floors up to the top room which was his study and lookout, with a broad spectacular view of Valparaiso’s harbor and the ocean. Each room in the house is full of the usual trinkets and beautiful knick-knacks he loved to collect. There are some lovely stained glass windows. You are allowed to wander around at will. Visitors are given booklets to read describing the history of each room and the furnishing and objects although no photographs are allowed other than the many breathtaking vistas from the windows.

One of my biggest thrills was to stand at Neruda’s desk and look around at what he could see from there while he was writing. As in each of his houses there was a magnificent view. And surrounding him were all the objects he loved, including his books and manuscripts. I stood in the poet’s study as I did in each of his homes, and looked around at what he would see as he sat at the desk to write — the panoramic view of the sea from the window, the shelves of books, the pictures of Walt Whitman he had in each of his studies, his personal treasures, and on the desk a manuscript, as always written in green or blue ink, the colors of the sea. 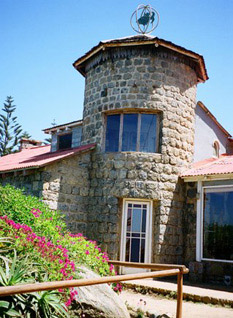 I took a bus down the coast to Neruda’s house at Isla Negra, which isn’t really an island. The house is built on a rocky headland overlooking the Pacific close enough to the shore to give that effect. The original stone buildings were erected in the late ‘30’s and were completed in the 1950’s. Neruda added to it bit by bit including various rooms to hold all his eccentric collections.

The house is built to resemble a ship, even to the low doorways. Being so near the crashing waves of the ocean, it has a realistic effect. Neruda’s impressive collection of ship’s figureheads decorate nearly every room. As well, there are masks and other wooden carvings from various places in the world. An entire room is devoted to his massive shell collection, even the tusk of a narwhal which he brought from Norway. I was most impressed by the bedroom which has windows facing the sea, the bed at an angle so the ocean can be clearly viewed. 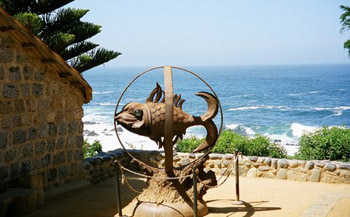 During the junta, when Neruda was dying of cancer, the military stormed the house, but it has been mainly preserved just as it was, intact with his marvelous collections (even more fantastical than those at La Chascona). It is exactly as it was when Neruda and Matilde lived there, even to the place settings at the dining room table: place mats of sailing ships and one (the captain’s) of nautical instruments.

“I am the captain and the guests are my crew,” he would say. In the middle of the table is a large crystal brandy snifter still containing brandy, because Neruda lost the key to open it. 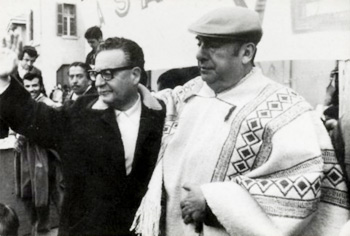 As in the other houses, there’s a well-stocked bar where Neruda played the role of bartender. I can almost imagine him standing there, pouring drinks as he engaged in jolly banter with his guests. And outside, beached on the shore, is a small boat where he would also entertain. (The boat never went into the water!)

Neruda is buried at Isla Negra, alongside his third wife, Matilda who died some years later. Their grave faces the ocean, on a round stone platform, surrounded by a bed of flowers. His will left everything to the Chilean people through the Neruda Foundation which is in charge of his properties. Neruda had returned to Chile when Allende was elected and twelve days after Allende was killed in the bombing of the Presidential Palace, he died of cancer. Some say he died of a broken heart.

As I stood by Neruda’s graveside and looked out over the blue Pacific, I thanked the Chilean friend who had introduced me to the poet, and thought of Neruda’s words in his poignant poem, “A Song of Despair”:

The memory of you emerges from the night around me.
The river mingles its stubborn lament with the sea
Deserted like the wharves at dawn
It is the hour of departure, oh deserted one!” 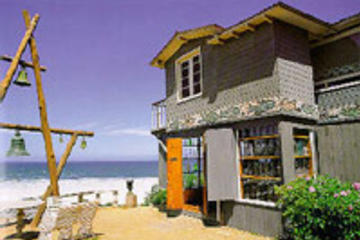 About the Poet
♦ Pablo Neruda’s bio 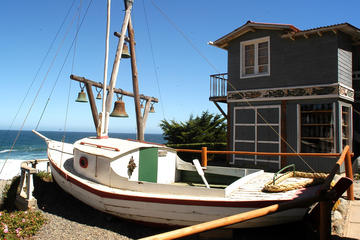 About the author:
Ruth Kozak writes poetry and has been inspired by Neruda. She is also a traveler and appreciated this opportunity to visit the poet’s houses. You can read some of her published travel stories etc. on her website www.ruthkozak.com