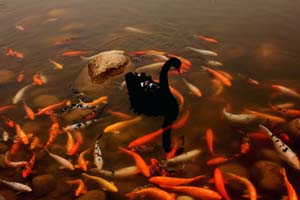 As I hailed a taxi to take me to the nearest, least flea-ridden hostel, I looked around at the industrialized blocks that stretched out before me. Although I knew the first settlers named the area Tianfuzhi Guó, (The Country of Heaven) four thousand years ago, this reference didn’t sit easily with the veneer of dirt encrusting the buildings and occasional person. Still, as it was recently named as China’s fourth most liveable city, I was certain I would be able to unearth the cultural charm. 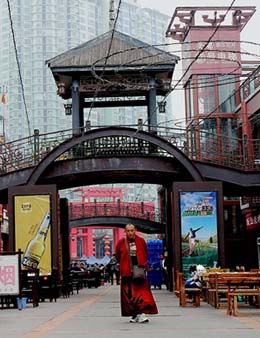 I started my search in Jinli Ancient Street, one of the few remaining spots where the vestiges of a rapidly disappearing culture are permitted to shine through, albeit under the strict control of the local tourist board. I walked along the cobbled streets determined to ignore the overhead neon lighting and pumping music.

Slightly spoiled for choice in terms of entertainment, I pushed my way through the masses, simultaneously drawn and repulsed by a high pitched warbling. Carefully manoeuvring around the youthful looking ear cleaners probing the ears of their worried looking customers, I pushed my way to the front of a crowd. I found Sichuanese male opera singers crescendoing to the finale of their highly costumed and theatrical show, their carefully applied makeup melting under the strain of the vocal effort and lighting.

Puppetry Through the Ages 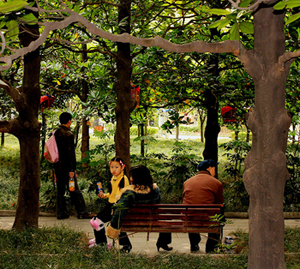 It was when I was hanging around one of the quieter stalls that I truly felt like I had found a moment to enjoy the China that was spread over the glossy pages of the travel magazines. Beneath bobbing red lanterns and the dangling sea of wishes entwined within the branches of a clematis, a crowd gathered to watch the shadow play of the Hidden People.

The Hidden People, who operate the puppets from behind the flood lit screen, belong to a thousand year old tradition. They release part of their own soul to animate their puppets. The play of shadow upon light re-enacts traditional fairy tales in a symbolic dance that seems to pirouette straight into the hearts and minds of the entranced watchers.

Time to taste some of the local delicacies. I walked through the heavily scented smoke that swamped the BBQ street, stopping at every stall to question the vendors. Uncertain about my toneless Mandarin, the vendors simply nodded and let fly with the la jiao, the famed Sichuan spice that could knock the socks off even the most experienced traveller.

I took several risks and sat down to an outdoor feast of kung pao chicken, zhang fei beef, zhong boiled dumplings and mapo tofu. I tentatively tried my wares under the watchful eye of the smiling Chinese diners who, slightly sadistically, awaited my reaction. I certainly didn’t disappoint them. 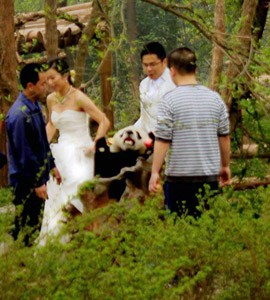 The following day I decided to head to Chengdu’s must-see panda sanctuary. I eagerly welcomed the green haven after the polluted streets, yet it was still impossible to escape China’s infamous crowds. Through the throngs of tourists and clapping children, I eased my way to the front in time to see an incredibly docile panda obligingly pose for pictures next to newly-weds. They had tentatively entered the enclosure and now grinned into the flashing cameras.

For me, the highlight was not the slightly lonely looking pandas, but the smaller red pandas that moved with the dexterity of cats and responded to the calls of the tourists. When the park wardens were busy elsewhere, the crowds would entice them to stand on two legs and paw for food. My eyes locked momentarily with one panda’s fox like eyes, and for that fleeting instant I thought I saw an intelligence that seemed aware of its captive situation, yet was prepared to manipulate it cuteness to full advantage. I smiled, perhaps baring a few too many teeth and our mutual gaze was broken. She turned her back and padded away with the arched haughtiness I probably deserved. 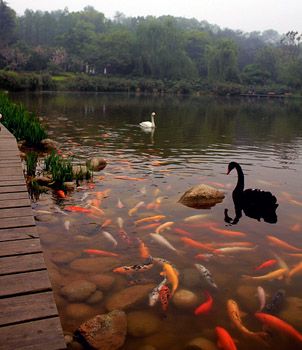 Having had my fill of panda enclosures, I wandered down to the lake for green tea and noodles. It seemed even the massing fish had learnt to manipulate the tourists, and as I watched them writhing to the surface to chow down upon the tossed breadcrumbs, I wondered what this place would be like without the protection of the sanctuary. It seemed to me the only animals in the park that were not somehow manipulated by the crowds were the unusual black swans that glided across the surface of the lake. Necks outstretched and wings beating in harmony with their mates, they seemed oblivious to the snap happy tourists.

The following day I packed up my bag. My trip was to take me further North to the spectacular scenery of the Jiuzhai Valley. As I climbed back onto the minibus, dreading the bumpy journey that stretched out before me, I knew that the pockets of beauty I found in Chengdu would keep me warm as I hit the road again.

The Chengdu Mix Hostel is a real down to Earth place where you can have a beer with other travelers and sample the delicious banana pancakes. The friendly staff are incredibly helpful and are able to provide local information.

At the other end of the market is the Kempinski Hotel. Although expensive, for some travelers it is worth the price after an arduous journey. Situated close to the airport expressway and ring roads, it is also rather convenient.

The Chengdu Lazybones Backpacker Boutique Hostel must have derived its namesake from its central location. Boasting a six minute walk to the ‘Mao Statue’ and a one minute walk to ‘Luomashi’ Metro Station, the lazier travelers among us will never be far from comfort. In addition, the hostel the staff speak English to quite a high standard.

Baguo Buyi Restaurant, located near Wu Hou Temple, offers a house specialty known as Yuer Shao Jiayu. This adventurous dish combines stewed tarot with a gelatinous green turtle.
Qiang Jiao Jiao means “the corner of a wall”. Accurately named, this kebab/skewer vendor is hidden down a tiny alley that leads off Niu Wang Miao Street. If you are lucky enough to find it, you will have the privilege of tasting some of the best chuan chuans in town.

At Lao Ma Tou Hot Pot on Yulin Central Street is home to some of the fieriest Sichuanese hot pot in Chengdu. Be prepared for raucous clientele, unusual ingredients and a burning tongue.

About the author:
Alongside other projects, Eleanor Herzog attempts the odd bit of writing. Her current projects are focused upon Asian cultural documentation and she is particularly interested in endeavors that prioritize development in their approach. Her assignments include television writing and production, travel writing, features, reviews, short stories and photography. Her work takes her all over the world as she prioritizes meeting and creating strong relations with the people she is writing about. For more, please visit her website: www.eleanorherzog.wordpress.com

All photos are by Eleanor Herzog.
More pictures at: www.flickr.com/photos/eleanorherzog