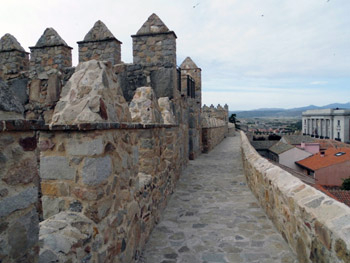 Finally, I was on my way. For some time I had made plans to visit the city of Avila, also known as the city of saints and stones in the Spanish province of Castilla Leon. As the train was on its way from Madrid, I didn’t dare take my eyes off the window because I didn’t want to miss the first glimpse of the famous Walls of Avila as they rise from the shores of the river Adaja. 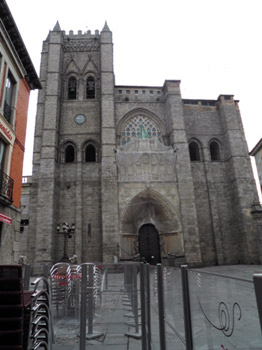 The walls and the iron grey Gothic cathedral are the ‘stones’ and Santa Teresa is the ‘saint’. My incentive to finally make the journey was the fact that this March saw her 500th anniversary. What better reason to travel than to follow in the footsteps of one of the foremost and most proliferate writers of Christian mysticism and the founder of the Discalced Carmelite nuns. An added bonus is the fact that Teresa would also have seen and been able to walk along the walls which encircle the old town of Avila with a perimeter of 2,516 kilometers.

Built between the 11th and 14th century, the walls were only completed for about 200 years when Teresa was born on 28th March 1515 in a small town near Avila.

The train rounded a last bent and there they were! I have experienced the sensation many times during my travels. You know exactly what to expect, you have seen the sites and monuments countless times in photographs, but, when you are confronted with the reality it’s always awesome. The walls consist of several massive gates and 88 semicircular towers. What’s even better is the fact that of the approximately two-kilometer perimeter you can walk about half on a narrow walkway on top of the walls, giving you views of the old town below as well as of the surrounding countryside. 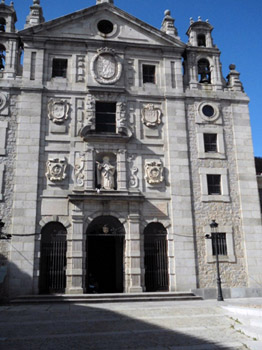 I had chosen a small hotel which was adjacent to one of the gates, so I just dropped my bags and went out to explore. Directly in front of me was Plaza de Santa Teresa with a church bearing her name and a small museum.

Canonized by Pope Gregorius XV, Teresa is a saint, but not a martyr although due to her teachings, she has suffered some confrontations with the Inquisition. Of Jewish heritage, her father converted to Christianity and her mother was intent on Teresa having a Christian education and upbringing. At age seven she was already fascinated with stories of the lives of saints and ran away with her brother to go to the Holy Land and become a martyr. Needless to say, that the pair didn’t make it far.

She was then sent to a convent for further education and fell rather ill. During her illnesses which lasted several years, Teresa experienced periods of ecstasy which are reflected in several works of art, depicting the martyrdom of Santa Teresa although these pains and suffering were the result of her contemplation and imagination. She has written extensively about her spiritual experiences which ultimately lead to her teaching of the ascent of the soul in four stages. 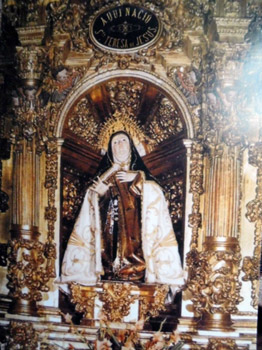 Poverty, serenity, mental prayer and meditation practices are the keystones of Teresa’s writings. She finally entered a Carmelite convent and was appalled to find that the nuns of her times adhered to none of them. Life in a convent in the 16th century was very worldly and she decided to change that and bring the order back to what it was intended to be.

Together with John of the Cross, she founded the Convent of San Jose in 1562, the first monastery of the Discalced Carmelite nuns and at a short distance from the church dedicated to her. I decided to make my way to the first possible access to the walls and to start walking. Monument after monument unfold from the height of the towers. At one point it leads very close to the cathedral which you can see from here at a very unusual angle.

Teresa is everywhere in Avila. Statues, fountains, images, paintings you can’t take a step without meeting something related to the favorite saint of the city. 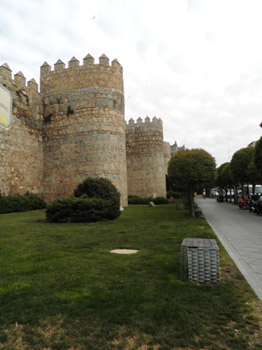 The month of October is dedicated to a festival of Santa Teresa, with processions , concerts and other festivities. As I found out when walking further into town, sweets form a part of the cult of Santa Teresa. To this day, the nuns produce Yemas de Santa Teresa, a sort of biscuit made from egg yolk and sugar and little chocolate nuns making the yemas are displayed in every patisserie. They make a nice souvenir and gift.

As I wandered the street of Avila, I soon discovered that there are many more ‘stones’, particularly in the form of palaces. Predominantly medieval, Gothic or renaissance one is more eye catching than the next. I happened upon one palace called Caprotti which is also a museum and, more interesting, has s story to me heart. An 18th century Italian painter by the name of Guido Caprotti was traveling to Toledo when he got caught in a snow storm in Avila. So fascinated was he by the town, that he never went further. He bought the palace, established his home and atelier there and became famous for his paintings of the walls in every season. I could certainly sympathize. I won’t move to Avila,much less be able to buy a palace but I can fully understand the attraction of this unique city. 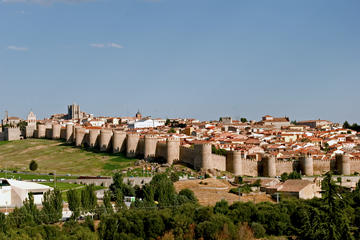 Avila is the highest altitude province capital in Spain. The climate is continental which means hot summer and very cold winters. It’s best to visit in spring or fall. It’s also not a tourist resort, so you find small hotels at an average price of €40 for a single including breakfast. Go for one close to the walls and enjoy the all night illumination.
Avila Cathedral website

About the author:
Inka Piegsa-Quischotte is an ex-attorney turned travel writer and novelist. She writes for online travel magazines and has two novels and a travel guide to Galicia/Spain published. She currently lives in Spain. Blog: www.glamourgrannytravels.com

All photos are by Inka Piegsa-Quischotte:
Walkway on city wall
Avila Cathedral
Church of Santa Teresa
Image inside the church
Towers