The massive concrete building loomed in front of us and a shiver of excitement ran through me. Soon we would be stepping into one of the most electrifying living museums, a place where scientists have worked consistently to send people and cargo to space. Yes, I am talking about NASA and John F. Kennedy Space Center, an awe-inspiring place to visit irrespective of whether you are a space enthusiast or not. A few years ago, my family and I were vacationing in Florida, the Space Coast to be precise and we were in Cocoa Beach.

We drove into Cocoa Beach from Orlando, home to Disneyworld, the premium tourist destination for people from all over the world. Close to 48 million visitors traipse through this wonderland each year. Not many people venture to Kennedy Space Center located on Merritt Island, near Cocoa Beach, a mere one hour and few minutes away by road from Disneyworld. Only about 2 million people visit the Kennedy Space Center annually. 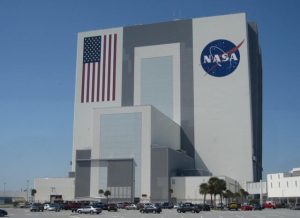 Our visit to the Kennedy Space Center started at the Visitors Complex, which in itself is a space to behold. At the U.S. Astronaut Hall of Fame, it was inspiring to see the life and achievements of all the astronauts who have traveled to the moon and space like such luminaries as Neil Armstrong, Buzz Aldrin, John Glenn and the first woman member Sally Ride. It includes space shuttle astronauts connected with Apollo – Soyuz, Mercury, Skylab, Apollo and other such programs. Being inducted into the Hall of Fame is an ongoing program and every year astronauts are added to the group in a ceremony. I found out that in order to be inducted, the astronauts have to be a NASA trained specialist, commander, or pilot and has to have orbited the earth at least once.

The Rocket Garden has an outdoor display of early rockets from the Mercury, Gemini and Apollo Space programs. The line was long at the Shuttle Launch Experience, where the braver visitors can feel the simulation of a real launch traveling at 17,500 mph on their way to orbit the earth. There is also an Astronaut Encounter event where one can meet pilots, commanders, astronauts and payload specialists in a live meet and greet session. 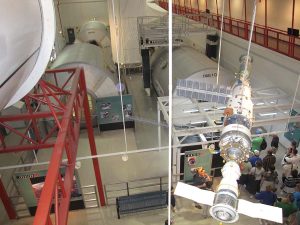 We decided to take the Kennedy Space Center Bus Tour, truly a highlight of visiting this complex. Although there are two bus tours, it is quite impossible to do both. We decided on the one that linked up more closely with our own interests. This behind the scenes tour takes visitors to restricted launch sites and spaceflight facilities, both historic and working. About 40 minutes long, the bus winds its way through the NASA complex, passing by the large, concrete building known as the Vehicle Assembly Building, the site where the rockets are constructed, the launch facilities known as Launch Complex 39, where we were delighted to see a shuttle being readied for a launch.

Another highpoint was when we walked through the preparation and construction facilities for the International Space Station. The Space Station, which orbits the earth about every 90 minutes, has been in space since 1998 and has been continuously occupied by astronauts of member countries since 2000. Astronauts stay over for around six months doing research and experiments on impacts on health due to long-term space stays. Because it is gargantuan in size, the station has been assembled over the years in parts and transported to space using shuttles and other rocket flights. We were awed at the feats of human technology and engineering, marveling at the size of the constructions and wondered how such massive objects get transported into space.

The bus tour concludes at the Apollo/Saturn V Center, which is dedicated to a vital point in the American space program, namely the landing of man on the Moon. Here we entered the era of Project Apollo, touring exhibits and viewing major milestones and moments connected to moon landings. I stared in amazement along with other visitors at the colossal 363-foot Saturn V rocket, the largest rocket to fly astronauts to the moon and back. The Firing Room Theater is where I thrillingly experienced the reenactment of the launching in December 1968 of the Saturn V moon rocket and the countdown for the spacecraft Apollo 8 carrying the first crew to orbit the moon, all of it done using the actual consoles used for the mission. While at the Lunar Theater, it was wonderful to see a short movie on the historic July 1969 Apollo 11 Moon landing.

Having spent almost an entire day at the Kennedy Space Center, we decided to make some time for other attractions in the area. First up was a boat tour to see alligators. This meant that we would be experiencing a first time ride on an airboat, the characteristic method for gator viewing in Florida’s swampy marshlands. We reached Lone Cabbage Fish Camp, about a half hour by road from our hotel in Cocoa Beach and a fixture in the area since the 1940s. The place started out as a fishing outpost but is now quite overrun with tourists seeking gator views. Soon after our ticket purchases, we boarded the airboat, a flat-bottomed vessel with a huge caged propeller fan in the back. We sat on seats reminiscent of park benches and then we received hearing protection headphones to wear for the trip, as the propellers get quite noisy. Soon the airboat zipped on its way, skimming across the St. John’s River, the longest river in Florida. Around us were the grassy marsh, swamps and wetlands with breathtaking views. Before we knew it, the captain slowed down the boat to cut the noise and I had my first glimpse of an enormous alligator, resting on the marsh and soaking in the sun. It was not long before we saw more alligators as the boat now slowly glided along the river. There were water birds in the marshes, but although the brochure promised views of cows, bald eagles and wild hogs, we did not see any. It is a short ride of around 30 minutes and soon we were back at the dock, ready for our next activity of the vacation. 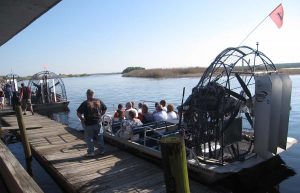 My daughter decided that we should spend at least a few hours on the beach and so we trooped back to our hotel area to enjoy the sun and sand of Cocoa Beach. This is an Atlantic beach, almost 70 miles of it and the water was surprisingly calm. I knew that many people preferred going to the Gulf Coast beaches due to much calmer waters and an abundance of seashells. The Atlantic beaches were preferred by surfers due to high waves. Cocoa Beach is deemed to be the surfing mecca of Florida, there is a profusion of available surfing lessons, and the world’s largest surf shop is located here. But then, we are not a surfing family and we were glad simply to wade in the waters and enjoy the vista of the ocean.

And in the end how could we be different from other tourists? Giving in to our impulses and making our daughter happy in the process, we decided to visit one kingdom of Disneyworld. Keeping the theme somewhat intact, we went to Epcot, the only theme park we had missed on an earlier trip to Orlando. The “Experimental Prototype Community of Tomorrow” or Epcot was the second of the Disney theme parks and it opened in 1982. It was envisioned as a planned living community highlighting technological innovation but those plans fell to the wayside after the death of Walt Disney. Instead, the focus was kept on modern innovation through its attractions and an addition of world nation showcase. 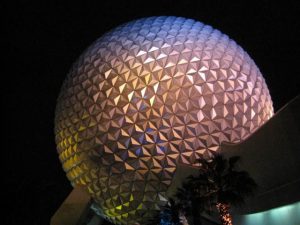 Entering the park, we immediately viewed the iconic geodesic sphere, almost a symbol for Epcot. The original geodesic dome was the brainchild of Buckminster Fuller and it was first displayed as Biosphere at the Montreal Expo in 1967. Fuller conceived the sphere to house humans in need of survival but the idea never really caught on due to builders not being skilled enough to build such structures.

Then in the 1960s, along came Walt Disney with his vision for a utopian city, perhaps with a geodesic dome. Although his dream was never truly realized as he died before knowing about the Montreal Expo and Epcot became an entertainment ground, the geodesic sphere, now named Spaceship Earth became an immediate attraction at its opening. This theme park is different from the other Disney parks in that the attractions are geared towards science and nature and thus was considered to not be very child friendly. Nevertheless, we as a family enjoyed doing the tour of the greenhouses where a variety of plants and vegetables are grown. Equally inventive and wonderful were the visits to one of the largest salt-water aquarium and the ride along the wonders of the world. Our visit to Epcot was capped off by the signature fireworks display that is held every evening when thunderous but dazzling fireworks and lasers light up the nighttime skies.

Florida’s Space Coast turned out to be an ideal vacation getaway with something to suit everyone’s interest and taste. 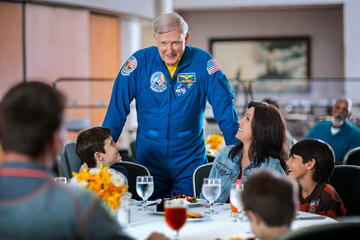 Susmita Sengupta, an architect by background, is a freelance writer who loves to travel. She and her family have traveled to various parts of the USA, Canada, Europe, the Caribbean, Middle East, Southeast Asia and India. 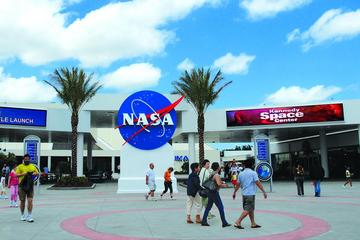