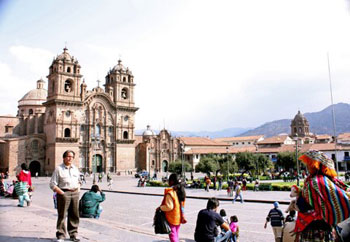 According to Andean Mythology, Inti the Sun God ordered Manco Qhapac to find “the navel of the earth” (qosco). At the navel, a golden rod could be plunged into the ground until it disappeared. Manco located such a spot – a perfectly flat valley surrounded on all sides by high mountains. He then established Cusco (also spelled Cuzco) with himself as its first emperor. This mythical city would one day become the capital of the mighty Inca Empire (Tawantinsuyu) before falling to Spanish invaders almost four centuries after its legendary founding.

Five centuries after the Spanish conquest, visitors to Cusco won’t have to peel back the successive layers of history. These are apparent within the colonial buildings incorporated into the stone walls, battlements and temples originally constructed by the “Children of the Sun”. 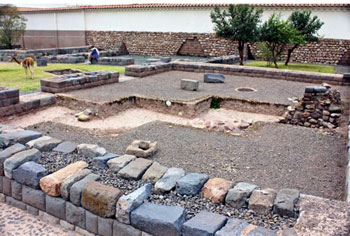 The very Spanish-looking Plaza de Armas was once surrounded by Inca palaces but now it is a holy square. The Cathedral, flanked by two lesser churches, is the focal point. The conquerors disassembled the Palace of Viracocha and re-used its gray stone blocks in the Cathedral as walls and supporting columns.

The fortress-like front doors suggest that the Cathedral was also used for less holy activities related to defense. Inside, the high altar incorporates 400 kilograms of silver extracted from mines at Potosi in present day Bolivia. To the right of the altar, a side chapel holds a statue of Jesus named “the Lord of the Earthquakes”. He protects Cusco residents from tremors. The statue, originally carved from a light-colored wood, gradually turned brown with exposure to candle smoke. Our guide, Adriel Vilcas, indicated that this Jesus has a large and varied wardrobe. Every day he is dressed in a different set of clothes, including the uniform of a local soccer team. 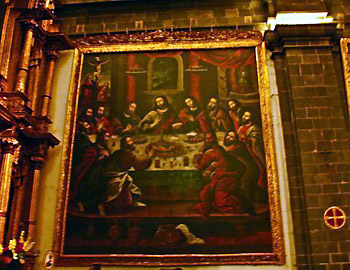 The cathedral also contains over 400 colonial paintings. The most interesting is “The Last Supper” where the main course is guinea pig and a local corn beer called chicha. At the bottom of the painting, to the right of center, Conquistador Francisco Pizarro sits as Judas.

Exit the Cathedral for the nearby Monastery of Santa Carolina. This convent was constructed on the ruins of “the Acllawasi” – the House of the Chosen Women. Young girls, selected from the best born and most beautiful, were dedicated to “the Cult of the Sun”. Novices were taught special skills like weaving, cooking and preparing the sacred chicha by matrons. At the age of sixteen, some of these sacred virgins even became royal consorts. Those not selected remained as matrons.

The Spanish replaced “the Chosen Women” with “the Brides of Christ”. As in colonial times, nuns occupy the monastery today. Their lives and duties, presented through a series of displays, included mending liturgical vestments, worship and penance. 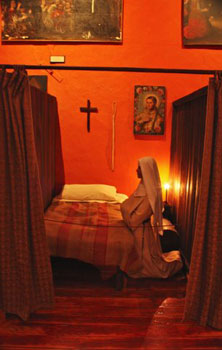 Novice nuns were trained at the monastery until 1960. Their bedrooms were filled with personal furnishings that they were expected to provide for themselves as a condition of entry into the Order. Two-foot long cords were hung near their personal crucifixes suggesting that self-flagellation was fashionable at one time.

Two blocks from the monastery, you find the ruins of the only remaining Inca palace in Cusco. At the entrance, get a feel for the former palace by studying the scale model. Moving along you find remnants of stone walls, all no more than 3-4 feet high. At the time of my visit, four llama-like picunas grazed on the grassy carpets found within the once-royal rooms. The picunas were tourist-shy and quickly vacated any room that we entered. One room housed two rock-lined water wells each 5 feet deep and 4.5 feet in diameter. Visitors also discover a drainage channel at the former doorway.

Beyond the palace is Qoricancha (also spelled Coricancha) – the former “Temple of the Sun”. During Inca times, the interior walls of this temple were covered in ornamental gold and silver panels. The Spanish, likely believing they had finally found El Dorado, stripped the walls bare and eventually donated the naked structure to the Dominicans. This religious order carefully retrofitted the Convent of Santo Domingo inside the temple during the 17th century. 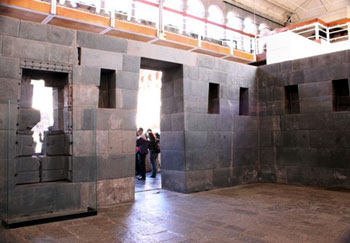 More recently, part of the cloister crumbled during an earthquake thereby exposing four of the original Inca chambers within Qoricancha. The cyclopean walls are striking because of the carefully interlocking stonework. The Incas did not use mortar so as to provide the walls with greater flexibility during an earthquake. This design appears to have functioned very well over time but it was not fool-proof. Past tremors have misaligned a number of stones situated in the upper section of one room.

The “Temple of the Star” is the largest room at Qoricancha. During the Inca period, a solid gold disc was positioned to reflect the sun’s rays through a niche directly onto the altar at the summer solstice (December 21st). The conquistadors destroyed the altar but never found the sun disc. Presumably this disc has remained hidden to the present day.

Before leaving Qoricancha, look for the white statue of Christ on the hill to the east of Cusco. Your next destination, Sacsaywaman (also spelled Sacsayhuaman), is located near this statue. This fortress was the site of the Inca’s last stand against the Spanish. Arriving on site, you find that Sacsaywaman actually consists of two individual 3-tiered structures separated by a flat grassy field. Viewed from the air, the two halves form the head of a puma. The zigzag walls, opposing each other over a length of 400 meters, are the puma’s teeth. The puma’s body was defined by the boundaries of pre-Hispanic Cusco.

Much of the original cyclopean walls were dismantled over an eight-year period by the Spanish, who then moved the stone blocks to the city below. According to Adriel, the largest block on site, the mother stone, is approximately 6 meters high and weighs between 125-160 tons. Amazingly these massive rocks were transported from quarries over 15 kilometers away, without the use of pack animals and the wheel. Walking around the fortress, I was amazed at how carefully the massive stone blocks were fit together. I couldn’t even pass a sheet of paper between them.

Hop a bus or taxi for the short trip down the road to the entrance to Tambo Machay. Arriving at the gate, you still have a ten-minute walk uphill to the site. Take it slow as you quickly become short of breath with exertion at high altitudes.

Adriel, who indicated that he was once a shaman, explained that Inca shamans performed soul-cleansing ceremonies at Tambo Machay. A single stream of crystal clear water cascades from an orifice at the base of the second of three tiers and then divides to form segregated male and female showers for ritual bathing. The duality of nature seems to be emphasized at this Inca site, dating to 1435 CE.

Returning to Cusco, tour the Inca Museum inside the ornate 16th century colonial mansion of a retired Spanish Admiral. Exhibits outline the various Inca and Pre-Inca cultures in the area through ceremonial pottery, textiles, goldsmithing and a farming diorama. A reproduction of a royal tomb houses six mummies permanently fixed in the fetal position. Also of note is a sign stating that the Inca nobility adopted some aspects of Spanish culture – ostentation and pomp.

Exiting the museum you have time to contemplate how much of the ancient Inca civilization surrounds you within the city, if you know where to look. You also realize that the modern-day descendants of the Incas are justifiably proud of the accomplishments of their ancestors; and they still harbor a deep-seeded grudge toward the conquering Spanish. 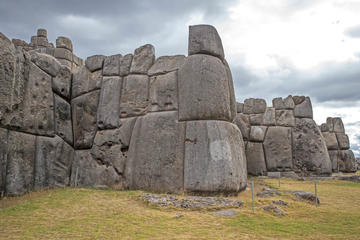 Diane and I enjoyed a city tour of Cusco which included visits to the Cathedral, Coricancha, Sacsaywaman, Tambo Machay and several lesser Inca sites. The tour company provided us with a Boleto Turistico.

This tourist ticket includes admission to Sacsaywaman, Tambo Machay and a number of other sites in and around Cusco. The tour also included separate admission tickets to both the Cathedral and Qoricancha.

The City tours do not include the Monastery of Santa Catalina, the Inca Palace and the Inca Museum. We visited these sites independently and purchased admission tickets are required. Details are provided below.

City tours can be booked in advance over the internet and can be combined with visits to Machu Picchu and the Sacred Valley. The tours can also be booked through travel agencies in Cusco. Just ask about recommended tour companies at your hotel.

Alternatively you can visit all of the sites without a tour group. Most of the major sites are a short walk on flat ground from the Plaza de Armas. Sacsaywaman and Tambo Machay are uphill from Cusco, making a taxi your best mode of transportation.

The Inca Museum is located at the corner of Tucaman and Ataud, just up the hill from the Cathedral. Admission was 10 Sols at the time of our visit.

The Monastery of Santa Catalina is located at 190 Santa Catalina, near the intersection with Arequipa Street. Admission was 8 Sols at the time of our visit.

The Inca Palace is located on Av Maruri across the street from the Scotiabank. Admission was free at the time of our visit.

Qoricancha is located at the Plazoleta Santo Domingo, one block beyond the Inca Palace. Admission was 10 Sols at the time of our visit.

Bring water and sunscreen when you travel around the city. Also bring a warm coat as sites like Sacsaywaman and Tambo Machay are often windy and chilly.

Photographs:
All photos by Diane Gagnon, a freelance photographer, who has traveled extensively in North America, the Caribbean, Europe and parts of South America. Her photographs have accompanied Troy Herrick’s articles in Live Life Travel, Offbeat Travel and Travels Thru History Magazines.