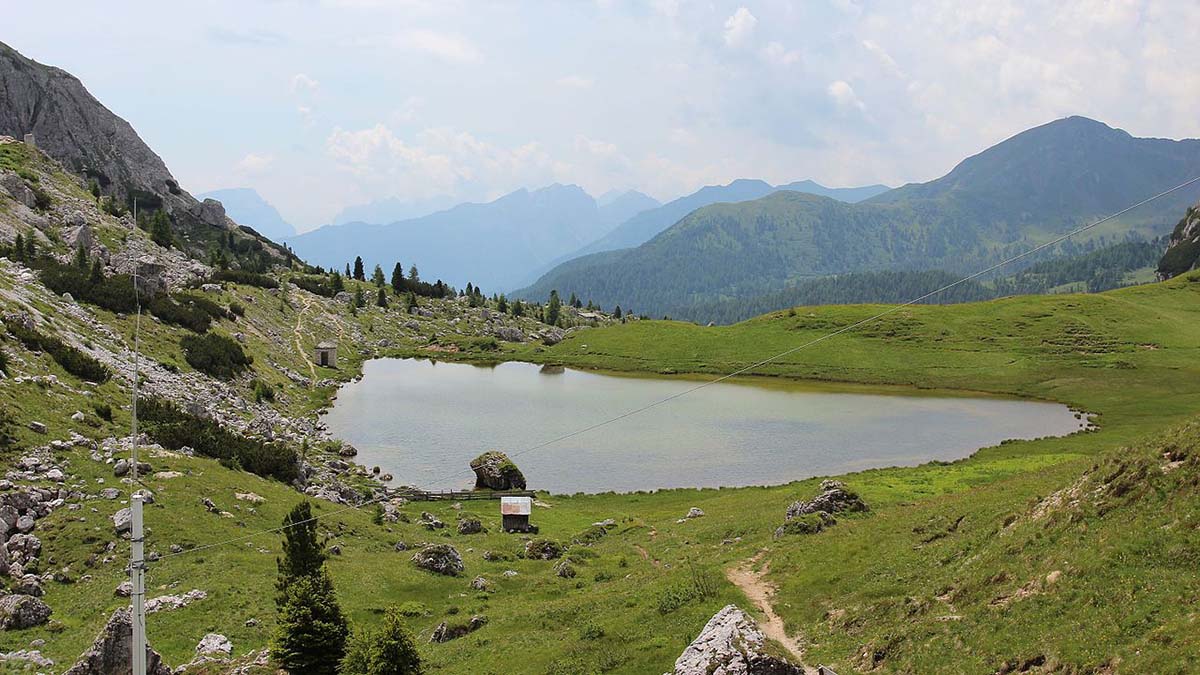 Before I ascended into the Dolomites, if somebody mentioned Great War (World War One) stalemates I would only have thought of the Somme, Ypres and other mud and blood filled fields of northern Europe; if someone talked about Great War weather-induced injuries I would presume they were referring to trench-foot; and if they recounted the horrors of Great War winters my mind would visualise soldiers crawling through freezing rain or knee-deep in stagnant water. 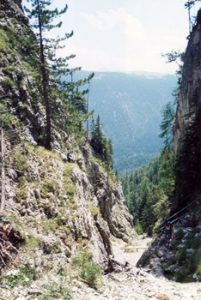 Yet here I was, in a cramped machine-gun post 8,000 feet up on Lagazuoi in the Italian Dolomites, where ninety years previously the Austrians had defended their Alps front line against Italians who had joined the war on the side of the Entente Powers (led by Britain and Commonwealth countries, Russia and France) against the Central Powers (mainly Germany and Austria-Hungary). The gun was pointed across at what had then been Italian positions; they only seemed a stone-throw away, although there was a hundred foot drop in-between.

Lagazuoi could be enjoyed in the summer sun, but temperatures were still cool to say the least, and in winter it can drop to -30c (-22f); so in the trenches of the Dolomites it was blizzards and frostbite that were the main weather concerns for the Italian and Austrian troops fighting doggedly in the tunnels and peaks of the southern Alps. 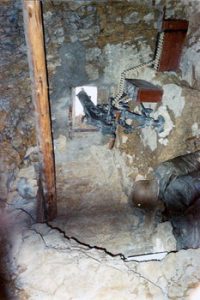 The Dolomites were formed 200 million years ago out of the primeval ocean, and the highest peaks now reach 12,000 feet. They take their name from French mineralogist, Déodat de Dolomieu (1750-1801), who discovered and defined the unique composition of the stone which gives it a lighter colour than most mountains.

I had travelled up to the Dolomites from Reggio Emilia with a local friend I’d met in Africa seven years before. Reggio is the main town in the Emilia-Romagna region of northern Italy, and is a bastion of socialism in a country divided between politically polarised regions; streets are named after left-wing legends such as Lenin, Marx and Che Guevara, and there is a statue in the town celebrating the partisans who fought against Mussolini in World War Two.

We travelled north by train, via Bologna and Verona to Brunico. The Bologna train had been packed with people heading to the coast at Rimini; I’d apparently picked an inconvenient time to visit Italy, as the country largely shuts down in August for a national holiday. 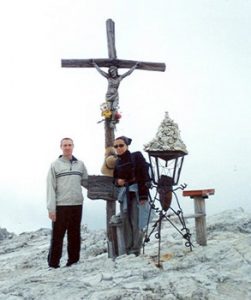 Sun-kissed vineyards and farmland provided the vista until Verona, and then mountains began to dominate the horizon after that; many featured majestic medieval castles that offer clues to the region’s importance as a trading route, and the wealth and prestige it has brought. The temperature had been about 40c (110f) in Reggio, but as we started winding up into the Alpine landscape temperature figures halved and there was more cloud.

When we arrived in Brunico it looked and sounded as if we’d crossed into another country: red and white flags abound, the architecture is typical of the central Alps, and German is the primary language as it is in Austria. This is because the region, South Tyrol, was Austrian until the Italian push into the Dolomites during the Great War. As part of the 1915 treaty that brought neutral Italy into the war it was agreed that they should have some Austro-Hungarian regions after the conflict. Although parts of the treaty could not be kept, South Tyrol did become Italian in 1919.

From Brunico we took a comfortable bus along country roads that provided great views of lush green valleys and high mountain peaks to the village of Pedraces in the Badia valley for a couple of Euros. We stayed at the Pension Armalia, which was clean and friendly, although the staff didn’t speak English; luckily, my friend provided translation and did all the organising. Breakfast and dinner were included in the price, and provided enough for the day; they were not used to catering for vegetarians so it was mostly egg and cheese dishes for me, but they were always nice and filling. 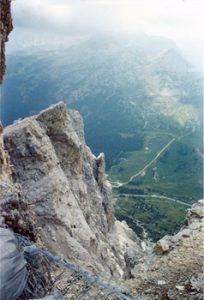 On the first day we bused it into the bigger village of La Villa, where there is a good tourist office. It was there that I first saw the leaflet for the mountain-top Great War Museum: it looked intriguing and declared itself unique. Three days of hiking amongst impressive peaks and Sound of the Music style meadows later it was time to take a trip back in time to the Great War.

We took a bus into La Villa again at about 9am, and then another bus to the ski lift station at the Falzarego Pass. The second bus journey took us to the end of the mountain range that framed one flank of the valley, and when I realised where we were going I was overjoyed; I’d wondered what lay beyond the high natural wall that dominated that side of the panorama, and now I was about to find out. As we wound our way through mountains, forests and Lake Valparola to the 6000 feet Falzarego there were magnificent views down the valley all the way to Pedraces.

The ski-lift carried us up an additional 2000 feet in altitude, and combined with the wind chill from being on top of an exposed peak it made a noticeable difference to the temperature. I didn’t think there would be much natural life at that altitude, and was therefore surprised to see a flock of birds fly high above us before turning en-masse and heading back down towards the valley below. We made our way over to one of the many crosses that appear on prominent peaks across the mountains in the region, and could see a couple of small lakes further into the range; mountains dominated the horizon for as far as the eye could see. 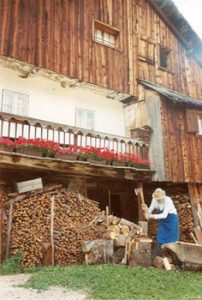 Leaving the exposed peak and passing the 360 degree reception centre we started to view the open air museum as we descended on a steep and narrow path. The path seems to be the one used during the Great War, as the preserved living quarters and positions of the Austrian troops defending the Lagazuoi Peak are accessible from it as you walk.

The soldiers spent two winters guarding the rock in the freezing cold, and it was easy to imagine how relieved the soldiers must have been to escape a third. There were separate quarters for the officers and men, with neither looking comfortable; the only preferential benefits for the officers seemed to be a little more room and a desk. The machine-gun post was claustrophobic and cold, and if you add on the freezing temperatures of winter and being fired at by snipers and heavy artillery then it must have been quite close to what I’d imagine hell would be like if it did ever freeze over. 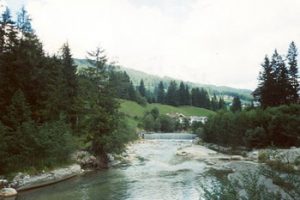 After leaving Lagazuoi we made our way down a track at the bottom of no-man’s-land; looking back up at the Austrian positions we could view them almost as the Italians must have done. All of a sudden the Austrian experience didn’t seem quite as bad, as I’d have preferred to be looking and firing down than up. However, the Italians did have the advantage of launching surprise attacks at the Austrians by tunnelling into the mountain.

The closest I came to relating to the sound of explosions that had disrupted the harmony of the Dolomites ninety years before was being awoken one night by the loudest thunderstorm I’ve ever heard. Before that I’d been thinking how easy it looked to just hike up one of the beautiful peaks. Like war, mountains can look easier to survive than in reality; and when you combine them together, they can provide one of the toughest tests of all. 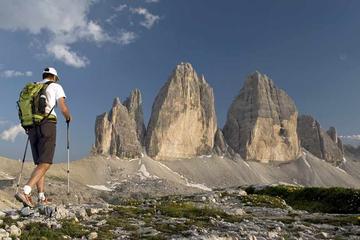 Private daily Tour: The most beautiful Trekking in the Dolomites

About the author:
After spending his twenties travelling the world, Marc Latham studied history and communications studies at university, and graduated with a PhD in 2005. He has since been building a freelance writing career from the www.greenygrey.co.uk website, and has had several articles published. This month, Booklocker is set to publish an ebook memoir about his first travel around Europe and the Middle-East, including time spent amongst the 1980s Worker-Traveller communities that nomadically followed the seasonal work.
Contact: marc@greenygrey.co.uk – www.greenygrey.co.uk/blog

Photo credits:
Lake Valparola by: Steinsplitter / CC BY-SA
All other photos are by Marc Latham.