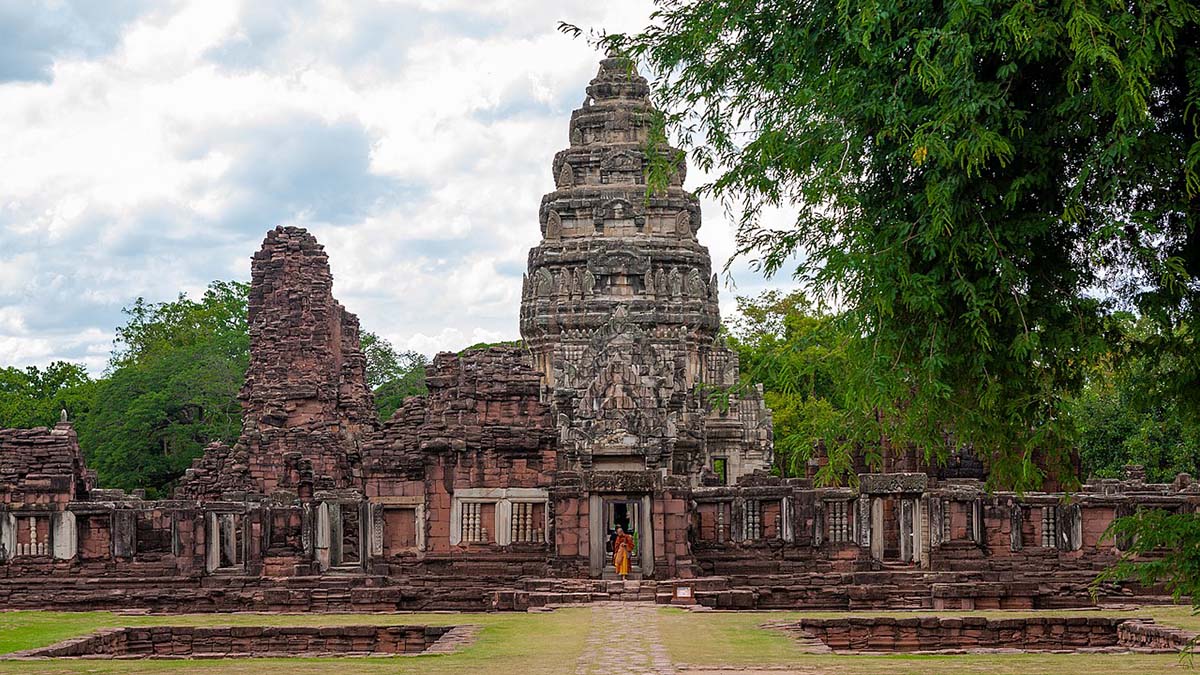 We’re playing in the dirt, my new friend and I. We’re lying on our stomachs flat on the ground, pushing and poking the dirt with our toys. We’re just like kids, chatting, laughing, with not a care in the world. But there’s a subtle difference. 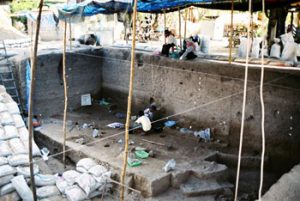 I’m a retired volunteer getting away from Vancouver’s February rain on a holiday in rural northeastern Thailand, and my new friend is Dr. Charles Higham, an archaeologist and one of the world’s foremost experts on SE Asian prehistory. (In photo below, with hat.) He is a Professor Emeritus at Otago University in Dunedin, New Zealand and Principal Investigator on this “dig,” an archaeological project run jointly by Otago University and the Thai Fine Arts Department in Bangkok. Our “toys” are trowels and fine surgical instruments that we use to clear away the dirt from a 3000 year-old Bronze Age skeleton adorned with marble bangles and beads, and accompanied in her burial by over a dozen beautifully decorated ceramic pots. She is one of 290 similar burials unearthed by Higham over the past three years of managing this project.

The project is large by current archaeological standards. It employs 20 staff, mostly archaeologists in their own right or specialists in a related field such as osteoarchaeology (specialists in bones and skeletons) and geomorphology (study of landforms), and 35 local villagers from this tiny rural community called Ban Non Wat, as labourers. The villagers subsist on only rice and a few other meager crops throughout the rest of the year, so this dig provides a major secondary source of income. The remainder of the team is comprised of volunteers such as myself. 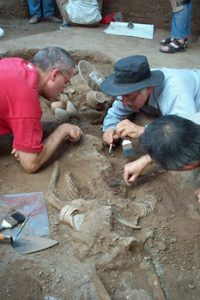 The thrill of hearing your trowel “clink” on an artifact or part of skeletal remains that nobody has seen for over 3000 years is shared by all of us who are volunteers. In addition to digging, we take turns reconstructing ancient pottery (similar to assembling a three-dimensional jig saw puzzle) and sorting other finds such as jewelry and tools. In the evenings, we are treated to short lectures about the project and the ancient Khmer civilization.

For the privilege of literally getting down and dirty for two weeks on a real dig, we pay the equivalent of $2800 Canadian each. This covers our two-week room and board at an upscale hotel in the local town of Phimai, a 45-minute ride away from the dig site in a pickup truck outfitted with side seats in the truck bed. A clean room with air conditioning and en suite shower and toilet is considered luxurious as digs go, and this one is popular for that reason. Exquisite food that is sympathetically not too spicy for the western palate and cheap beer ($1.50 Canadian for 660 ml), add to the popularity. As part of our evening activities in this quaint town, we occasionally venture out to get to know the locals and encounter such tempting market delicacies as fried scorpions and grasshoppers (I try the grasshoppers but pass on the scorpions) and such activities as betting on kickboxing matches, with some wildly enthusiastic fans. Elephants mixing with the local traffic is also a common sight.

The $2800 fee (2005 price) is paid to an international non-profit organization, the Earthwatch Institute, headquartered in Maine, USA. Of this amount, 50% ends up as the lion’s share of funding for Higham’s dig, with the remainder of his revenue coming from grant money. Throughout the dig season running from early December to early March (Thailand’s dry season), there are five volunteer teams, with each team of up to 15 persons staying for two weeks, although there is also a shorter one-week option available. Volunteers come from all countries and walks of life. Our dig, for example, had volunteers from Canada, USA, Britain, Bangladesh, Japan, and Sri Lanka, their ages ranging from early 20’s to mid 70’s. Earthwatch, whose mission is “to promote understanding and action necessary for a sustainable environment,” has over 125 similar “expeditions” in which anyone of any age can work shoulder to shoulder with experienced scientists in the field on real – and often exotic – research projects as varied as studying Namibian Black Rhinos in Africa, listening to disappearing Russian folk music, or controlling invasive plant life on the Galapagos Islands. My choice, one of their many archaeological digs, helped to fuel what is rapidly becoming an engrossing retirement hobby of studying the world’s major ancient civilizations. The dig experience, advertised as the “Origins of Angkor,” also allowed me to fulfill another dream, that being to visit the extraordinary temple complexes of Angkor in northern Cambodia following my two weeks with Higham. 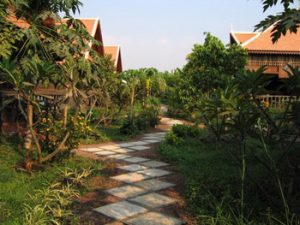 Phimai, the town where we lodged while on the dig, was the northernmost settlement of the ancient Khmer empire that covered a lot of Southeast Asia between the 9th and 15th centuries. A highway linked Phimai with the capital of Angkor during that period, a distance of about 225 km, but it has since been overtaken by jungle. Today, it is much more efficient and comfortable to travel the distance by air on one of the regular flights from Bangkok to Siem Reap, the main tourist town just south of the ruins of Angkor. Siem Reap is a bustling, bursting small town that is like a teenager blooming too fast and not knowing how to deal with the changes. Hotels from every world chain are rising daily and aid money is pouring in. Most of the world, with the notable exceptions of Canada and the USA, seems to have discovered the awesome magnificence of Angkor. The streams of tourist buses are endless.

Thanks to recommendations from dig members, I reserved accommodation at the charming Palm Village, a recreation of a typical Cambodian village with each guest room actually being a small palm house, surrounded by giant jungle flowers. Since it is located away from the city centre, it is much quieter. Awakening to the sound of distant Khmer music is magical. The price is also right, $35 per night including breakfast. 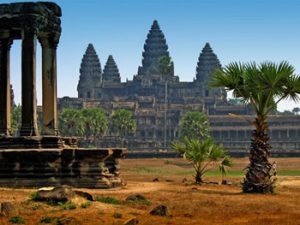 What is Angkor, and why visit? Most people who have not visited misunderstand and believe it is only a single monument, Angkor Wat. Indeed Angkor Wat is amazing. It is one of the largest single temple complexes in the world and a masterpiece of ancient architecture. However, it is only one part of the ancient Khmer capital city of Angkor, a city that covers an area of roughly 200 square kilometers (77 square miles), buildings of which are still being discovered in the surrounding jungle. This city, at its height in the 12th and 13th centuries, had a population of around a million at a time when European capitals were much smaller. It was a vividly colourful, well-planned and laid out complex, with canals and waterways used for transportation. Today, the remaining buildings, which are numerous, are mainly temples that still elicit gasps of wonder at the sheer architectural creativity and especially at the detailed bas reliefs on most of them. The entire area was only re-opened to the public in the 1990s as prior to that it formed the centre for the notorious Khmer Rouge regime led by Pol Pot, and had to be cleared of land mines before anyone could visit.

The origins of Angkor are mysterious since few detailed records remain. We do know that the society was heavily influenced and probably mostly populated by the Indian sub-continent. The prevailing religions were modified forms of Hinduism and Buddhism, as scenes from these are prevalent on all the existing temples. A series of kings built the city but the empire gradually collapsed mainly from relentless incursions by the neighbouring Thais. What little is presently known of daily life in the empire has been provided by a Chinese scholar, Zhou Daguan, who visited Angkor from 1296 to 1297, when it was at the height of its splendour. 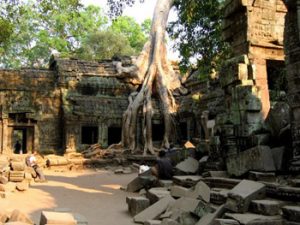 Thanks to some advance reading,, I am partially prepared once I arrive in Siem Reap. As one can imagine, the ruins of Angkor are considerably spread out and good transportation is essential. Many tourists come in buses but I opt for the daily rental of a car with air conditioning and a good driver since I am alone. One can also rent bikes but this is sheer madness, as the heat is relentless, no matter what time of year (winter is slightly cooler and much drier than the monsoon season of July and August). After the first day of a three-day pass ($40 US and well worth the price) I realize that the best way to survive the temple crawling – yes, there are stairs everywhere and good shoes plus a minimum level of fitness are necessary – is to start early in the morning when crowds are smaller and the sun less overpowering, take a rest at mid-day and finish with another two or three hours in late afternoon before sunset. The car is on a daily rate so the driver is willing to drop you off and return to the hotel for pickup at any time. A final tip – avoid the crowds who try to go to the best places for sunset and opt for a quiet stroll among the ruins at dusk as birds come to life and you can stand alone in the middle of a ruined temple overgrown with jungle vines while the ghosts of the past whisper their secrets to you.

Angkor is one of the gems of the ancient world, well worth a place near the top of everyone’s list of places to visit. I have tramped through Egypt, China, the British Isles, Italy, and most of the major Mayan cities and this is equal to any of them as a single concentration of truly magnificent ancient architecture in a spectacular jungle setting.

About the author:
Doug Matthews is a writer and educator based in Vancouver, Canada, with previous careers as an aeronautical engineer and special event producer. His writing ranges from technical engineering papers to general interest pieces for newspapers and magazines, as well as original music and mini-plays. He has also published three books on special events. Check out his blog about special events at www.specialeventguru.blogspot.com
Contact: gear6@shaw.ca

Photo credits:
Temple, in Phimai city, Northeast Thailand by Supanut Arunoprayote / CC BY
All other photos are by Doug Matthews.