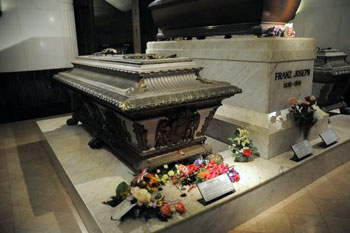 Go on in, and enjoy the “Viennese Vaults.”

There they rest – rulers of the once-mighty Habsburg Empire. They lie in ornate coffins, in plain coffins, in gigantic tombs and small tombs, and vases for ashes and innards. It is a mesmerizing scene.

The slightly creepy, yet captivating, display of the dead is in the lower level (where else!) of the Capuchin Church, in the heart of Vienna’s famed “Ring.” There, in several rooms, in many caskets, is the history of Europe as we’ve come to know it. 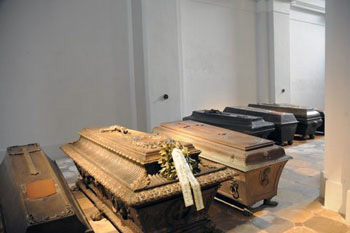 There, in that church crypt, is most of the royalty that led the Holy Roman, and Austro-Hungarian empires. The history of those several hundred years, 1618 to 2011 (the last Habsburg to make it in was laid to rest in July 2011), shaped Europe and the Americas. It wasn’t a well-defined, clearly delineated empire that the Habsburgs governed. At various times they ruled 44 nations, duchies, and a variety of ethnic gatherings; some were part of the Holy Roman Empire, some were not – such was the political jigsaw puzzle of Europe back then.

The Habsburg Empire marks its beginning in 1276, according to one source, when Rudolph of Habsburg moved from the family house – the Habsburg Castle in Switzerland – to Austria, beginning the expansion of the dynasty, as well as the construction of castles, fortresses, palaces and royal hideaways. By the 16th century the Habsburg’s empire had expanded to the point where two Habsburg lines were ruling Europe.

The Habsburgs knew they were creating a unique royal line – it would become the longest running in history – so why not keep their legacy alive, even after death? To that end, Empress Anna, wife of emperor Matthias (1600s), convinced the Capuchin cloister in Vienna that they should create a crypt for her and her husband so they could be visible reminders of the Habsburg legacy. 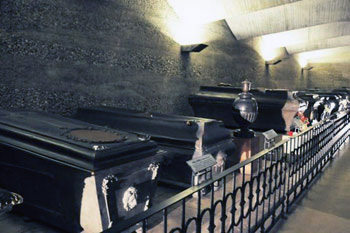 Anna, in her will, written in 1617, set aside funds to begin building that crypt. Good thing she did – she died a year later. Her husband died the following year. Politics and war put off the crypt building until 1633. Their burials were the beginning of a practice that reached its royal conclusion this year. On July 4, 2011 Otto von Habsburg, also known as Otto of Austria, “former head of the House of Habsburg and Sovereign of the Order of the Golden Fleece (1922–2007) and former Crown Prince (1916–1918) and, by pretence, Emperor-King (from 1922), of Austria-Hungary—or formally, of Austria, Hungary and Bohemia, of Dalmatia, Croatia, Slavonia, Galicia, Lodomeria and Illyria, and of Jerusalem…” (There’s more, but you get the idea.) — died. He was 98. And that should pretty much do it for the House of Habsburg.

Oh, there is room for one or two more; and, there are a couple of Habsburgs still around who may request “a room at the inn,” but as far as history is concerned the Holy Roman Empire, and the Habsburg Monarchy are fertig, abgeschlossen, geschlagen … kaput! Just shy of 400 years!

There are 144 caskets, and ossuaries containing Habsburg rulers, their children, close relatives, and some internal organs. Visitors reach out and touch the tombs and urns, hands within inches of the long dead. Yes, it is bit macabre; yet, it is magnetic. 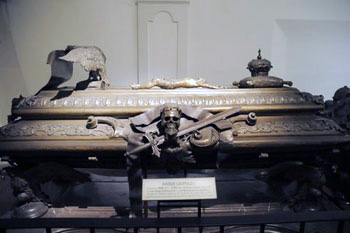 From 1618 on, casket after casket was put in place, making it necessary to expand, creating rooms for more Habsburg royalty. One huge room was designed just to hold the gigantic, highly embellished tomb of Maria Theresia, probably the most famous of all the Habsburgs. The artwork on Maria’s tomb is astonishing. The practice of interring organs in one church, the heart in another, and the body in the crypt of the Capuchin church began with King Ferdinand IV of the Romans in 1654. He left orders that his body was to go to the Capuchins; his heart to Augustinerkirche; and the urn with his viscera to Vienna’s St. Stephens. A few urns remain with the Capuchins. It’s tad ghoulish, to be sure, but a custom – unique to the Habsburgs – that exists to this day. The last three-stages of separation took place July of 2010 for Otto von Habsburg.

The roll call of the dead who are interred in the Capuchin crypt is far too extensive to put on paper. Visitors might want to have a computer print out in hand. While Vienna invites the visitor to enjoy the waltzes, orchestras, pastries, coffee houses, the world-famous Choir Boys, and – of course, schnitzel – it also calls us to the crypts that vividly display its royal history. The dead down there have stories to tell. Oh yes… and remember, in Vienna the Dance of Death is in three-quarter time. 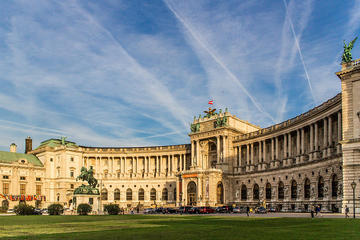 A web site to remember: www.wein.info

Getting to Vienna is easy from most major gateway US cities. Lufthansa, Austrian and Swiss Air are major carriers from the US. From European cities numerous low-cost local airlines have departures all day. And, of course, if time permits, a high-speed train is a delightful European experience.

Visit Vienna Hotel Start website. Virtually every one of the 200 properties is listed with rates and available dates.

TIP: The smaller boutique properties have more time to assist guests in getting around the city.

MUST SEE: Vienna Riding School; The Hofburg; St. Stephansdom (Cathedral). Even non-Catholics will sense the richness of history at a Sunday mass. Sit on the right side, upfront next to the tomb of Fredrick III. Also: The Schonbrunn Palace, The Prater (park) and ride the Ferris wheel. Enclosed cars give the rider a stunning view of Vienna.

JUST FOR FUN: Get on a tram and ride until it ends. Then do the return trip from the other side of the car. An inexpensive way to see Vienna.

About the author:
A former Chicago radio and TV broadcaster. Bob has been a DJ, newscaster, interviewer, producer, writer, and “gopher!” Bob’s broadcasting career began at KRIB in Mason City, Iowa where he also hosted a weekly record hop at Clear Lake’s SURF BALLROOM. In Feb of 1959 his guests were Buddy Holly, Ritchie Valens and the Big Bopper – it would be their last personal appearance. Bob moved on to Springfield, Illinois, Peoria, and then WLS in Chicago, joining the station in 1960 when it became one of the nation’s biggest popular music stations. Bob moved into television in 1966 as program host, producer, and news anchor. He has turned his attention to travel writing and photography, with stops in the USA, South America, the Caribbean, Asia, and Europe. Bob’s favorite travel experience? “Trains…anytime, any kind, but especially those that huff and puff, and spew smoke and cinders!” For his article here on Vienna, Bob traveled by air and riverboat. “They’re not bad, either,” he says.

All photographs are by Bob S. Hale.