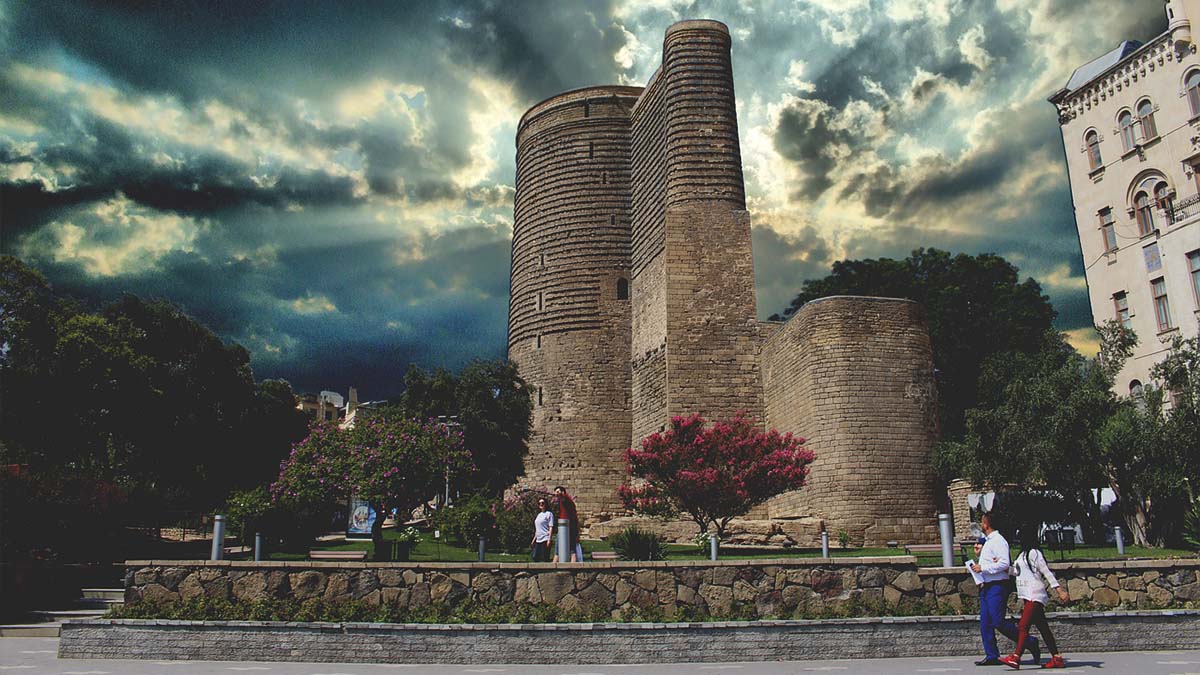 I lived in Baku, Azerbaijan for over 20 years. But I rediscovered the city for myself once again when I was guiding a guest from Switzerland around. As I showed him the landmarks and told him the related history, explaining their meaning, I fell in love all over again with my city. 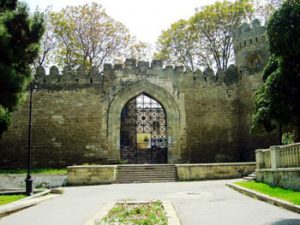 Baku is the capital and largest city of Azerbaijan, as well as all the Caucasus. Situated on the Caspian Sea shore, it is also the biggest port on the sea. A bridge between the East and West, Baku contains both ancient and modern features. The urban population is estimated to two million people.

Scientists think that the word “Baku” is a shortened form of the phrase which meant “City of winds”. No surprise, because Baku is a windy city indeed. Being part of the Persian and Russian empires throughout much of its history, briefly occupied by the British troops after the World War I, Baku was declared the capital of the independent Azerbaijan twice – in 1918 and 1991. As a modern city, Baku flourished during the Soviet period. Now the city contains the medieval monuments, the luxurious constructions of the first oil boom era (19th century), the Soviet-style apartments and the modern plazas. 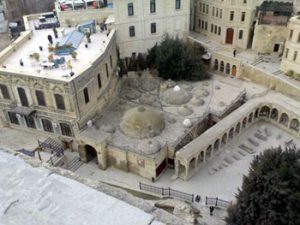 Baku consists of eleven administrative districts and 48 townships. The town of Oil Rocks, the first city built on open sea also belongs to the Baku metropolis.

It is a kind of tradition to start discovering Baku from the oldest part of Baku, called the Walled City or the Inner City. The Walled City of Baku along with the Shirvanshah’s Palace and Maiden Tower were included in the UNESCO World Heritage Site in 2000.

Qiz Qalasi or the Maiden Tower in English, the monument of the 12th century is a tower located in the old quarter of Baku. The tower is the symbol of Baku and one of national emblems of Azerbaijan. It is featured on Azeri currency banknotes and coins, as well as other official pieces of paper. It houses a museum and a gift shop. From the top of the tower, the entire downtown can be seen. During the national holidays the brazier on the top is lit during the nights. 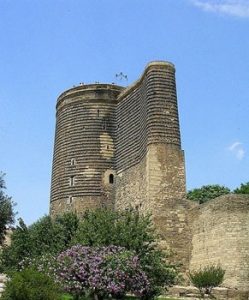 When asked why the tower was named Maiden Tower, I told my guest the legend related to this monument. According to the story, the Princess kept in the tower threw herself off its top into the sea.

“The sea?” protested my friend, “how could she? The sea is far from the tower”.

My answer surprised him: “The Maiden Tower was originally built on the shore of the Caspian Sea. The legend testifies to the fact that the sea was swashing at the very foot of the tower. Due to land reclamation in the early 20th century the tower is now separated from the Caspian by a busy main road and public gardens.”

Our next destination is the Icheri Sheher or Inner City, the ancient part of the capital. When entering the area it felt like we were in the Middle Ages. This area is picturesque, with its maze of narrow alleys and ancient buildings: the cobbled streets past the Palace of the Shirvanshahs, the caravansaries (ancient inns), the baths, the old houses, the shops and the mosques. The narrow stone-paved streets, the medieval buildings, the shops that sell old souvenirs attract foreign tourists every year. Every stone in Ichari Shahar bears witness to thousands of years of history. One has to listen to it, pay attention to what is seen around. Some people sense its history; others just pass by without understanding anything at all. 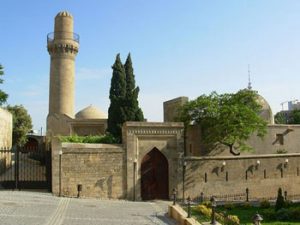 The next day I couldn’t accompany my guest. However, he did not mind walking in the Inner City by himself. Later I was told his impressions. When seeing a foreigner walking in the streets, the local people were inviting my friend to tea or coffee. Some even asked him to stay for a lunch. The local people who do not speak any foreign language demonstrated the best quality of our nation – hospitality to a foreign guest; this filled my heart with pride and happiness once again.

Do not hesitate to go to Inner City when you arrive in Baku. You will be welcomed not only by the medieval monuments, but the hospitable local people who are always ready to take care of a guest.

People who are eager to see the exotic side of Baku, can visit Balakhani Township. The oil extraction is going on there. The place is preserved as a legacy of the oil boom era of Baku. One can visit this area as James Bond did in “The World is Not Enough”. 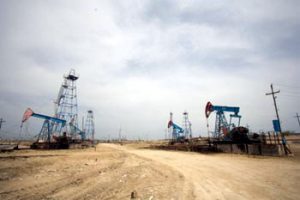 Baku has been the synonym of oil for a long time. The oil boom, which started in the mid 19th century, reached its culmination in the beginning of the 20th century, when only Baku was producing half of the world’s oil. The next boom happened during the World War Two, when the Baku oil provided 70 percent of the Soviet Union’s fuel and made a great contribution to the Soviet victory. Every Baku citizen can tell you about the historical video chronicle that demonstrates Hitler’s birthday party, when führer was presented a big birthday cake with the world map on it, and picked the piece with Baku.

Baku has a lot to share with its visitors. Walk around the coastal boulevard, visit the yacht club, go to see the Temple of Fire built in the 17th century, or enjoy the nice scene of Yanardag – Burning Mountain. Visitors who like night entertainment will never be bored here. According to the Lonely Planet’s ranking, Baku is also amongst the world’s top ten destinations for urban nightlife. 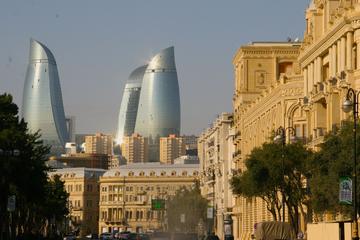 For information about visiting and travel to Baku, Azerbaijan, see:

About the author:
Rusif Huseynov was born in Baku, Azerbaijan. He now lives in Troy, Michigan, USA. He is interested in world history and geography. He speaks Azerbaijani, Russian, English, Turkish and some German. Among his hobbies are collections of postcards and key chains from different countries. One of his dreams is to travel all over the world.

Photo Credits:
First Baku photo by Pexels from Pixabay
All other photographs by Rusif Huseynov.