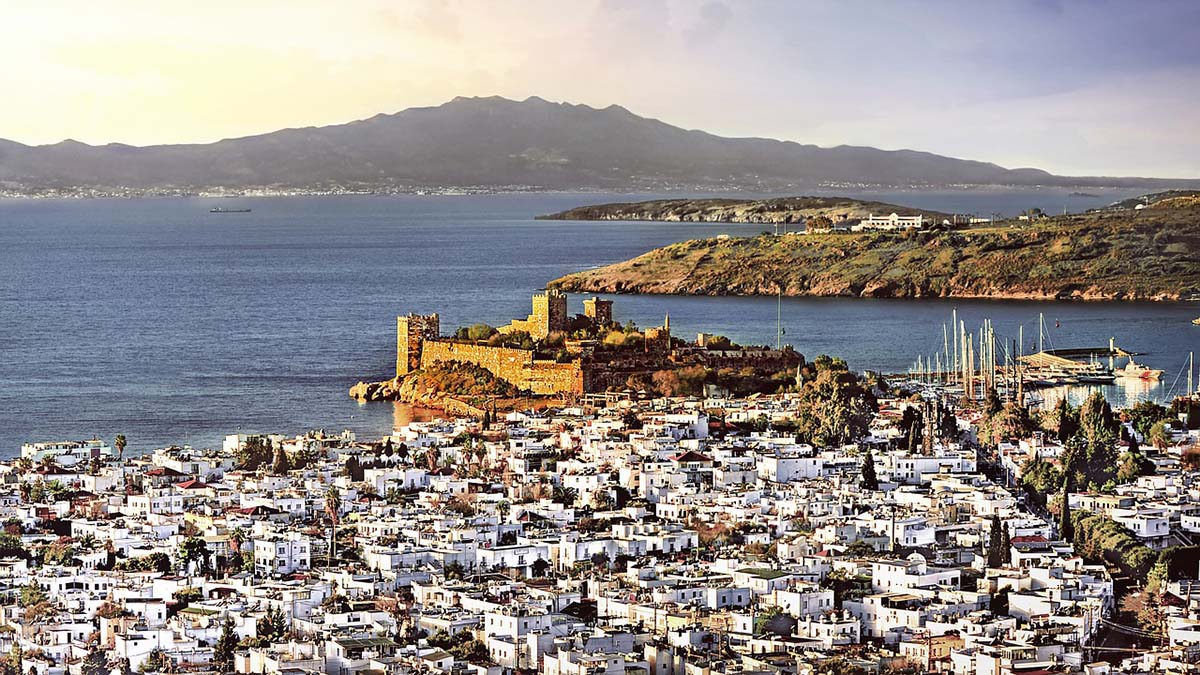 A visit to Turkey is always a delight for me. I’ve been to Istanbul and down the coast to Ephesus and Kusadasi several times. This time, my destination was Bodrum and Fethiye. 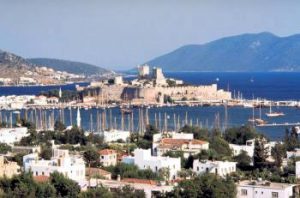 My friend and I arrived at Bodrum by ferry from the Greek island of Kos. Bodrum is a beautiful bustling tourist centre. The harbour is dominated by the impressive Castle of St. Peter built by the Knights of St. John. Magnificent yachts from all over the world are anchored there and the sea front is lined with charter and excursion boats.

We found a quiet pension on a back street with chickens, ducks and roosters in the yard, and set off to see the sights. Known in ancient times as Halicarnassus, Bodrum was once famous for the Tomb of King Mausoles, one of the Seven Wonders of the World. The Mausoleum has long since been destroyed (a reconstruction of it is in the British Museum) and fragments of the marble were used by the Knights to build their castle. 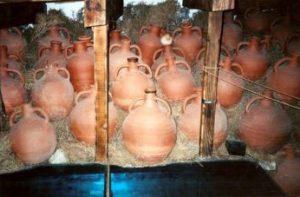 Inside the castle grounds peacocks and various exotic fowl strut around the gardens or roost in the trees. The castle is now the home of the world’s only undersea archaeological museum, Turkey’s pride, with a display of cargo and in replicas or actual portions of ships found ‘in situ’ dating from 1400 BC to Byzantine times. The Bronze Age ship finds are the most amazing for here was a ship laden with gifts from a king to a king as some of the artifacts, already antiques when the ship set said, were treasures only to be owned by royalty, including Hittite and Egyptian treasures.

The various towers of the castle also have displays. In the English Tower are suits of armour and artifacts including the replica of “The Sovereign of the Seas” a ship commissioned by King Charles I in the 1600s. 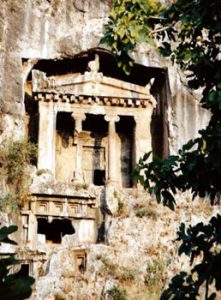 Past the castle, we found ourselves at the east harbour. The atmosphere was like a carnival with laser lights and a cacophony of blaring music from the dozens of discos and café bars that line the waterfront. People jammed together along the harbour stroll, tourists and Turkish families enjoying the sights. I have always been impressed with the graciousness and courtesy of the Turkish people. The behaviour of many of the tourists was in direct contrast. Scantily clad young women gyrated in wild abandon from platforms in front of the clubs, raucous drunks reeled through the crowds. My friend and I beat a hasty retreat back to the more sedate traditional part of town and found a quiet table at a sea-side restaurant.

Dining out in Turkey is a delight, even if it’s at a fast-food donair shop. Food is prepared with great care and served artfully with special attention to spices and garnishes. The waiters “serve’ you elegantly with great attentiveness and gallant manners and are friendly, helpful and courteous to their guests. In addition, prices are so much cheaper than elsewhere in Europe. We tried the fabled Iskendar kebaps (lamb fed on wild spices laid on a slice of pita, topped with tomato sauces and browned butter.)

The next day we took a dolmus (mini bus) to a small fishing village a half hour from the city. Gumusluk Beach is a blue flag beach, though it’s mostly stony. The sea here is jade green, the water calm and shallow. We got beach chairs and umbrellas free for the day courtesy of the beach café where we ate lunch. Considering this is a conservative Muslim country, it was surprising to see some tourist women flaunting bare breasts. They were asked courteously by the waiter to cover up. 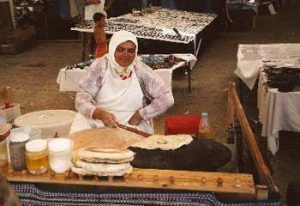 Nearby is a village, the site of ancient Myndos, inhabited from prehistoric times to 4th century AD. After the death of Julius Caesar, his assassins, Brutus and Cassius hid out here. In ancient times Myndians mixed their wine with sea water to relax the stomach so they were called “the brine drinkers’. Some house foundations can be seen on the hillside or underwater, accessible to scuba divers.

The next morning we were off again, on a four hour bus trip down the coast through the pine-forested mountains to the beautiful harbour town of Fethiye. The major bus companies and dolmus (mini buses) of Turkey are privatized, consequently each owner/operator is conscientious in their bid for customers. Passengers are provided with various services, making the trip comfortable and pleasant. First we were given lemon-scented hand wash to freshen up for the trip. Next, cold drinking water was offered, then tea or coffee, cake and later soft drinks.

Fethiye is located on a lovely bay strewn with islands. The town is built up the hillside, just below the famous Lycian rock tombs, but there are many sarcophagi in the town itself. The ruins of a crusaders castle crowns the hill, built by the Knights of Rhodes. The rock tombs dominate the town, representing the facades of Doric-style temples cut into the cliff face. 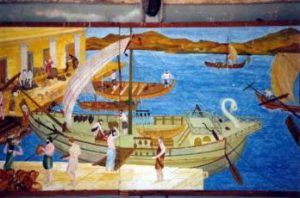 To get to the tombs, we walked through a village on the outskirts of Fethye. Here it is the more traditional Turkey where women are dressed in colourful floral patterned trousers and skirts and head scarves, and men wear crocheted caps.

I had always wanted to visit the Lycian tombs, but by the time we reached the top of the steep slope I was so exhausted from the heat I almost opted not to climb up. Once I’d caught my breath, I knew I had to. After all, I’d waited years for this moment. So up I went, climbing the steep the two hundred steps until I was standing right in front of the most predominant of these marvels, the Tomb of Amyntas, which dates to the 4th century B.C. The magnificent view across the tiled rooftops of the village and town of Fethye to the sparkling turquoise sea made it worth the effort.

On the way back through the village three children greeted is. introducing themselves,and politely shook our hands. They little girl questioned us, asking our names, where we were from, and offered information about the area. She said she’d learned English in school. At the edge of the village the little boy piped up and said “One million, please.” Unfortunately, I’d neglected to bring trinkets from home so we had nothing to offer them and as begging is frowned upon, we thanked them, and went on our way. 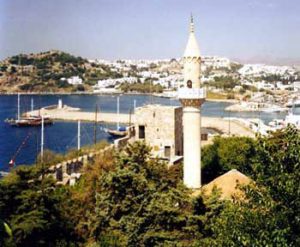 Fethiye is a more traditional town then Bodrum. Although there are plenty of tourists about, most of them staying at the out-of-town resorts. Our pension was located on the hillside overlooking the harbour ($24 a night with breakfast). The next morning we sat on the roof terrace which was decorated Turkish style, and were served a delicious traditional Turkish breakfast: boiled egg, cheese, tomato, olives, bread and honey and apple tea. Then we set off to spend our last day at the beach.

We caught a dolmus for the nine kilometer trip to Oludeniz, south of Fethiye at the coast. These dolmuses are mini-vans (15 passenger) privately owned like taxis and they travel all over the place for just $2. or less. We were headed for Oludeniz, the Blue Lagoon, a beach which is hidden from the open sea. But we ended up at the larger Belceky Beach. “Oludeniz” means “Dead” or “Calm Sea.” But the sea at Belceky certainly wasn’t calm. Big rollers crashed in on the pebbly shore. The sea here is absolutely gorgeous, clear turquoise and very warm, located on a bay surrounded by pine-forested mountains. It’s a popular resort with lines of colourful umbrellas and lots of tourists. You can rent sports equipment here and we saw a few brave people plummeting off the cliff in what they call “tandem paragliding” with Turks hanging on their backs (or were they hanging on to the Turks?) There were also a number of parasailers out over the sea. We spend the day frolicking in the waves. Later, at the Oludeniz village bazaar, we watched a traditionally dressed lady rolling out gozleme, a kind of thin pancake, kind of like a crepe but made with dough instead of batter and filled with shredded potato, cheese and onions. We bought some for a delicious snack while waiting for our dolmus.

I would have liked to stay longer in Fethiye, to take the three to four day sailing cruise that is offered down the Turquoise Coast. But that’s something I can look forward to on my next visit, for I will certainly return again. Turkey, to me, is a genuine “delight.” 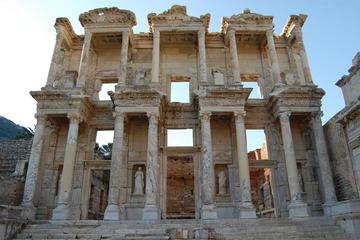 Private Guided Tour from Bodrum: Ephesus House of the Virgin Mary and Temple of Artemis

BODRUM:
Accommodations: Bodrum fills up with tourists in the high season, so hotels are usually booked ahead. The narrow streets north of the western bay harbour have pleasant family run pensions.

FETHIYE:
Accommodations: Fethiye has a good selection of budget and mid-range accommodations. Resort hotels are usually booked in advance.

About the author:
W. Ruth Kozak is always intrigued with exotic destinations. She has made several trips to Turkey and this summer hopes to make another. Ruth writes historical fiction as well as travel and to visit these destinations and explore the historical sites she has written about is always a thrill.

Photo credits:
First Bodrum, Turkey photo by Alp Cem from Pixabay
All other photos are by W. Ruth Kozak.