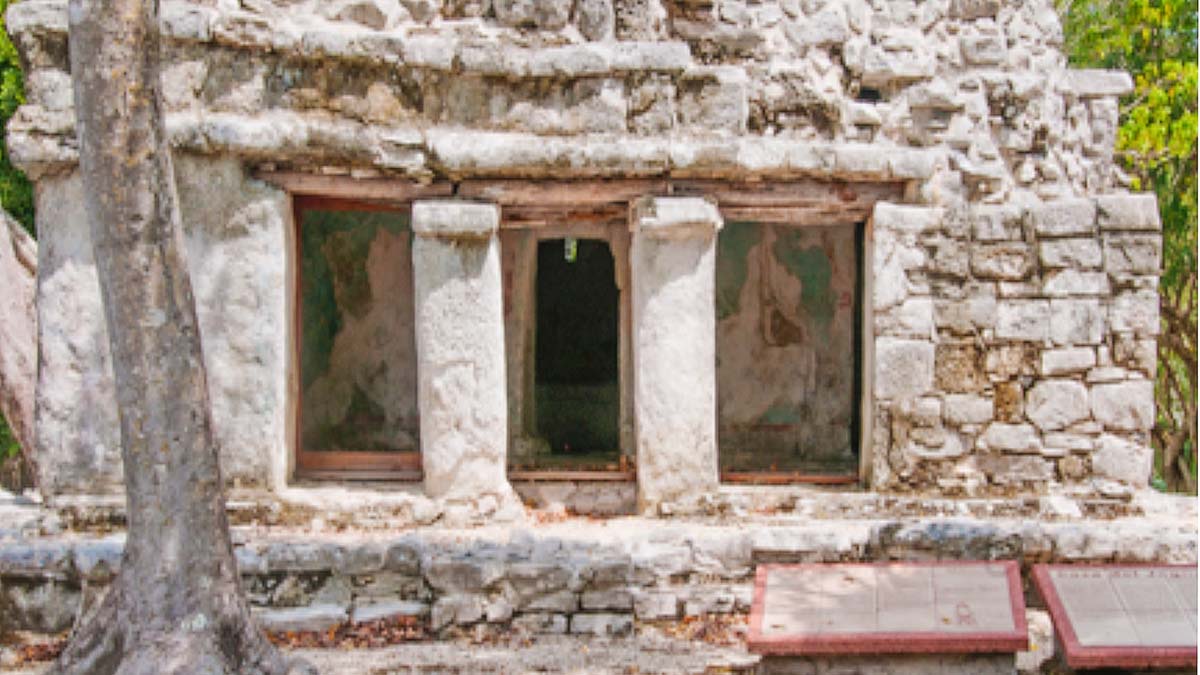 Standing alone, face to face with a mural depicting the Mayan diving god is one of those Indiana Jones moments that delight me when traveling. My first experience of this rare event happened in March of 2013 in the Xel Ha Architectural Zone. Now I admit up front that when wandering through pre-Hispanic cities in the Americas, I feel a real sense of communication with the original people. So I had been touring Mayan sites for years, but I had only seen murals in museums, never before on the original wall. 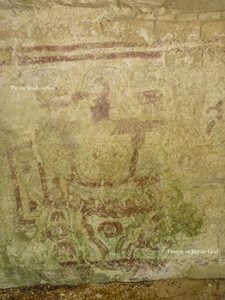 This first solo excursion resulted from seeing the small ruin on the beach at the Grand Sirenis resort in Xaac Bay. “That building looks like Tulum,” I thought.

To check my memory, I returned to Tulum. Sure enough, the majority of buildings used a design like Xaac Bay: square, double rows of decorated stones around the top, and windows in the seaward side.

Some quick Internet research introduced me to the world of an extensive Mayan maritime trading network. From 900 AD to the Spanish conquest, trade was conducted in large Mayan canoes along the east coast from northern Yucatan as far south as Honduras.

As the large city states indulged in destructive wars, survivors moved to the coast and built, or adapted, simpler sites, in what is now called the East Coast Style, like Tulum. These sites had access to ocean fish and shellfish; were set on or near coastal harbors for their trading activities, and had one or more cenotes nearby for fresh water during a long drought.

Trade goods included everyday things such as salt for drying food and obsidian for knives, arrow points, tools, and weapons of war. Luxury items such as jade, turquoise, and quetzal feathers to show high rank were traded for the upper classes along with items like cotton and vanilla. And their trade currency was positively delightful: Cacao (chocolate) beans.

The map below is my rough sketch of the Yucatan Peninsula with several of the major Mayan trading centers marked. So far I have managed to visit El Rey, Ixchel, Xaman Ha, Xel Ha, Tancah, Tulum, and Muyil, viewing without meeting other tourists except for Tulum and Muyil. While there are interesting features for Maya-philes at all sties, my favorites are Xel Ha and Muyil. 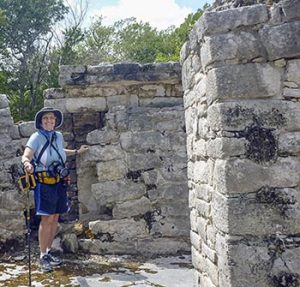 I chose Xel Ha for my first exploration. There was a driveway, a modern building where people took an entry fee, and a map on a sign. In I went.

The Group I found first was Group B which showed typical East Coast style features: squared buildings, some with pillars, and evidence of the typical Maya practice of erecting new buildings over old. I was elated to be wandering through possible rooms of Mayan traders. 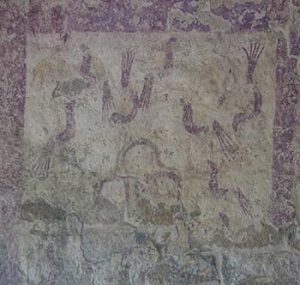 From Group B, I followed a path north toward buildings close to the highway, arriving at the Group of Birds. And there I saw my first mural on its original wall, the Bird Mural. The Temple of the Birds sits on several platforms so the murals are well above eye level, but easy to climb with care for building and one’s ankles. The Bird mural in red, green, and yellow shows a local long-tailed, short-beaked bird. It is an early Classic period around 300-600 AD when the site was first inhabited.

Following the building around to the south side, I found my personal favorite mural on the site, the three-panel mural with the diving god shown at the beginning of this article. The diving god — probably associated with the Mayan bees and Venus — stares down at the solo visitor from 1500 ago, an inspiring and somewhat solemn sight. This god was important to the Mayans, with murals and sculptures in many sites. Honey and astronomy, food and a world view —those were crucial to the ancient Mayans as their civilization struggled for survival, just as they are to us today. 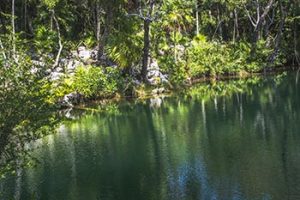 From there, I walked east along the hot and sunny Sacbe, the Mayan white road built up with white rocks and shells, I arrived at the Jaguar Group and its beautiful — cooling— cenote.

After a quick dip, I examined the 3-columned palace of the Jaguar. Alas, the diving god mural that had been on the outer wall overlooking the cenote was severely damaged by Hurricane Wilma in 2005. However, peering in through a mesh barrier gave me a clear view of the large Jaguar mural in red ochre, black and the remarkable Mayan blue. Again, the black eyes of the Jaguar stared back at me, delivering their message from the Mayan culture. Those eyes look out from the milennium-old Mayan blue made of añil leaves traded from Guatemala and local clay, as brilliant as those at any larger site.

A small site, usually empty of other tourists, and now with good signage, Xel Ha is probably the best self-guided tour available to have a close-up encounter with ancient Mayans. It fairly glows with images of what was important to them.

To go to Muyil, on the other hand, I would choose one of the Mayan tour groups, both for the information their guides have and for the opportunity to enjoy a complete Mayan experience. Set in the Sian Ka’an United Nations Biosphere, the pyramids of Muyil rise out of jungle wetlands.

First settled around 300 BC, Muyil is one of the oldest continually inhabited trading sites, thus including classic pyramids similar to Tikal, round temples perhaps performance buildings or observatories, and the post classic East Coast building.

Unlike other trading centers, Muyil is not right at the ocean. Instead it is at the end of one natural canal, two freshwater lagoons, and a canal built by the Maya between 1000 and 2000 years ago. When I travelled there in 2016, nine of us took two boats through the first fresh water lagoon, the Mayan canal, the second lagoon and into the natural canal that flows to the sea.

Part way along this canal, there is a dock beside the boardwalk into the ruins. On my 2014 tour, we followed the boardwalk to the ruins. In 2016, we left our boat and floated down the canalsitting in life preservers. With a good current, because of the movement of fresh to salt water, this is a safe activity with lots of waterbirds around. And it’s fun; I laughed through the whole 40 minute float.

Back in the Mayan village, we had the option of choosing fish, Mayan style, (Tikin Xic),with a sauce made of gourd seeds, mild seasoning, tomatoes,onions, grilled in banana leaves by the villagers. My only regret is that I can’t find banana leaves for cooking it in Canada. 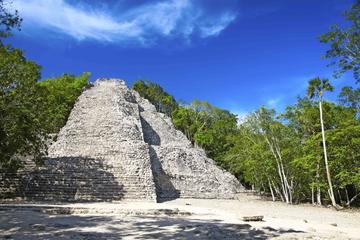 Combo Tour in Coba and Xel-Ha in Cancun

In 2016, the Xel Ha Archeological Zone is now well signed so you can ask a collectivo driver or taxi driver to let you off near the entrance, on the east side of Hwy 307 about 300 yards south of the Xel Ha theme park. Cost is now 65 pesos. There is no food or water for sale and a lot of mosquitos, so bring your own snacks and some biodegradable insect repellent.

It is possible to get to Muyil by car driving south of Tulum. However, this is a place that I prefer to visit with a local tour company, for both the information and the fun.

I have gone with both Community Tours Sian Kaan and Mayans Explorers and would recommend either. Both provide canal floats, boat rides, ruin tours as well as other activities. Whatever way you see Muyil, try to make sure it includes some genuine Mayan food. And take an extra T-shirt to wear while you float because even in hot weather, the water will cool you eventually.

Mayans Explorers is a family-owned tour company, with knowledgeable guides, many with appropriate PhDs. It has offices in Playa del Carmen but picks people up at their hotels.

Community Tours is a community organization started by Mayans from Sian Ka’an villages and hires local Mayans as guides, boat captains, bus drivers, cooks, and servers. It also gives monthly funds to the Mayan villages from the business. In addition to economic development they are also dedicated to environmental preservation. For these reasons, I personally choose them. They have offices in Tulum and also picks people up at hotels.

About the author:
The first time Marsh Mildon saw a photo of Machu Picchu was on her 40th birthday and her life changed. Since then, she has spent all my vacations and several months of volunteering in Central and South America, visiting ruins of many peoples and many ages. She is fascinated by the cultures of the ancient Americans. In between trips south, she works as a freelance writer/photographer with two published novels, several stage plays, and hundreds of non-fiction articles published (all in print not online).www.marshadelsol-mildon.artistwebsites.com.

All photos are by Marsha Mildon:
The jaguar temple
The Diving god at Xel Ha stares down at the visitor with its clear red ochre, green, and yellow colors.
Pillars, platforms, and new walls built over old are typical Mayan architectural styles that we can touch in Group B.
The bird mural is a three panel mural with images of birds on two sides with a somewhat indistinct Mayan symbol for ‘lord’ in the center.
The cenote can be seen from the Temple of the Jaguar and is lovely for a quick dip or foot paddle after walking the jungle-shrouded sacbe.