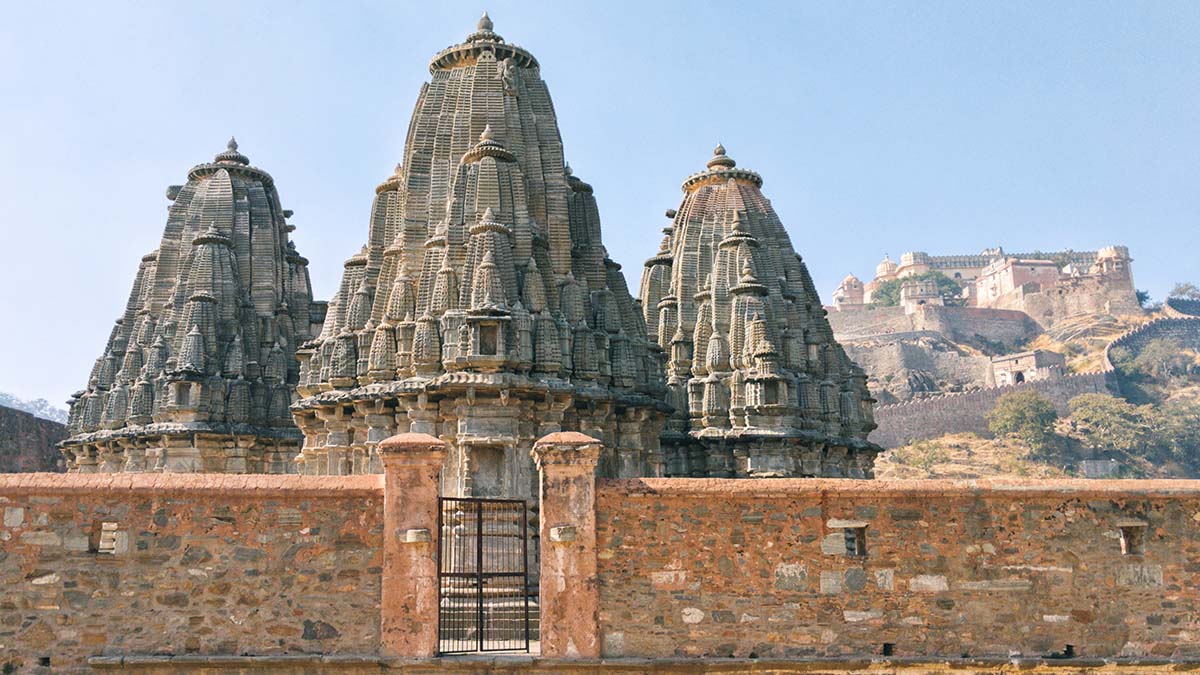 We can scarcely believe that we are in the heart of the Indian desert – Rajasthan. It is so green and lush, the roads lined with sugarcane fields. Even the approaching mountains appear green all over. Our driver tells us that this is the only fertile area of Rajasthan, and this year the rains have been plentiful.

“You are lucky to see this face of this state!” he exclaims. 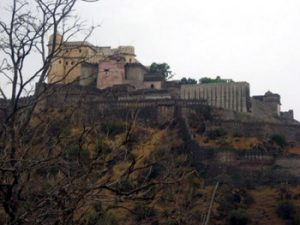 We are on our way to Kumbhalgarh, one of the lesser known forts in the Rajasmand district of Rajasthan. The main attraction is the wall of this fort, which extended over 36 kilometers, the second longest after the Great Wall of China.

As the mountains come closer, it becomes apparent why the kings built a fort here. The area is wild and still retains the forest cover. It’s so remote that as soon as you enter the mountain ranges, there is no mobile network. What could be a better way to escape into the past?

Rana Kumbha, the Rajput king who ruled Mewar between AD 1433 and 1468, built this fort to protect his family against the invading Mughals. Situated at a height of 1900 meters, it is the highest fort in Rajasthan. The fort is hardly visible until we are almost at the gates, an effective choice of location for a fort meant for hiding.

The 36 kms long wall surrounding Kumbhalgarh was built over a period of ten years, and is a marvel of engineering. The ramparts are broad enough for four horses to walk on, side-by-side, and tall enough to impede people from climbing them. The outer side of the wall is smooth, while the inner side has steps at regular intervals. While the fort has been largely neglected over the years, the walls have stood the test of time well, strong till this day. 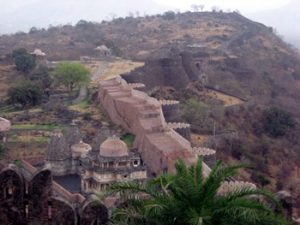 This was not the first bastion to be built at this place, for it was the original choice of the Jain king, Samprati in the second century, a scion of the Maurya Dynasty. A deeply religious ruler, he built about 300 temples dedicated to Jain gods all over his fort. After him, the fort fell into disrepair, and was inhabited only by a few of the locals. Years passed and finally Rana Kumbha arrived, looking for a suitable place to build his fort. He hesitated to build at the location which was so deep rooted in Jainism, choosing instead, a location a little lower. Although it was built more for safety than for comfort, it is its construction and its architecture which are the most interesting things about the fort and palace of Kumbhalgarh. The palace commands a great view of the surrounding villages and the temples inside the fort. Most important of all, the walls of the fort which meander over the grassy hills, appear here and disappear there.

It is here that history and legend mix, for the story goes that every morning the workers would start the work, only for the structure to crumble by the next morning. This went on for about 15 days, after which the king did what most Hindus do till today – consult his his spiritual preceptor. The guru informed him that the deities governing the location required a voluntary human sacrifice in order to be appeased. The king sent out word, but, as can be expected, no one volunteered. He again turned to his guru, who said that there was only way out – he himself would volunteer, but the king must agree to everything he said, without any discussion. The king agreed, and set out with the guru. The guru instructed the king that he was to be beheaded at the location he would indicate, and the king was to build the first gate of the fort at that point. Moreover, he ordered that the king’s palace was to be built at the place the guru’s body would fall. The king and the guru walked up the mountain till they reached the ruins of the ancient fort. There, the guru asked to be beheaded, which the king did with great reluctance. But imagine the surprise of all present, when the headless body walked on further up the hill, right to the summit, where it finally fell to the ground! 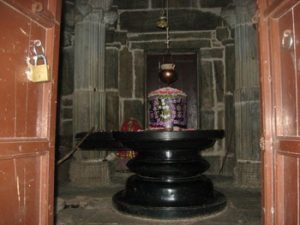 Today, the main gate stands at the location where the guru’s head fell, the exact spot marked by a small temple. The palace stands right at the summit, providing a bird’s eye view of the whole countryside. The guru’s sacrifice was not in vain, for the king lived safely in the fort for a long time, and many of his grandchildren were born there. In fact, the most famous of his grandchildren, Maharana Pratap, who attained an eminence even greater than his grandfather, was born in this palace. There is a plaque commemorating him at the entrance to the palace.

Rana Kumbha was a secular king, who renovated all the 300 temples of Jains within the fort, and also built 60 more temples of Hindu gods within the walls. At the peak of his reign, it is said that the bells of all the 360 temples tolled as one, and were heard in the far off villages, where people stopped their work to pay obeisance to the lord who gave them such a tolerant king.

Of all these temples, the one closest to the heart of the ruler was the Neelkanth Mahadeo Temple, a temple dedicated to lord Shiva, his patron deity. The six foot high stone Lingam (the symbol of Shiva) is the only deity in the area still being worshiped and maintained by the locals. We are fascinated by the height of the lingam, but even more fascinated by the legend that Rana Kumbha was said to be so tall that as he sat for his prayers on the floor of the temple, his eyes were on level with the deity! It is said that the king was about 9 feet tall. He never began a day without performing prayers to this deity himself. What an irony that he was beheaded by his own son, as he prayed. 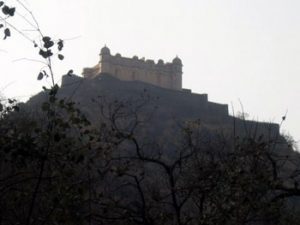 The king was a good ruler and there are numerous stories of his greatness and generosity. It is said that every evening at sunset, a massive lamp would be lit in a special place right at the summit, with 100 kilograms of cotton and 50 kg of ghee (clarified butter). The light from this lamp was bright enough for farmers on the foothills to work on their fields even at night! A queen of the neighbouring kingdom saw the light of the lamp from her palace and wondered about the king who lit such a lamp.

One day, her husband, tired of hearing praise of his rival, got angry and ordered her to go away to the king she admired so much. In those days, the wife had no choice but to obey her husband, and accordingly she set off to Kumbhalgarh, where she was warmly received by the king and his family. The kind treated her like his daughter and gave her all comforts. By then, her husband had decided to march to Kumbhalgarh with an army, but his progress was impeded by the dense forest, which seemed to grow even denser as they went further. Finally, they were so tired that they decided to send a message to the king and see if there was any possibility of avoiding a war. The king, to their surprise, not only welcomed them warmly, but treated him as a son-in-law (in Indian culture, a son-in-law merits the highest form of treatment), and finally sent him away with his wife and a big chunk of land as dowry.

It is easy to get lost in time as you stand on the walls of this fort, listening to the stories of its legendary king – the king who gave his name to this area, and who lives on through his deeds long after his tragic demise. While there are no kings who live here now, the people who live here are truly their descendants, for they are a hardy lot who face the tough times well, living life in a difficult land and making the most of it. It does seem a tragedy that the fort fell at last to the Mughals, against whom it had been fortified, not thorough weakness, but by treachery. The reign of the Rajputs came to an end here, and what was left of their glorious reign was plundered, and left to lie in ruins, but once again people turn to the fort, in search of history, in quest of the kings who left their stamp on India history. 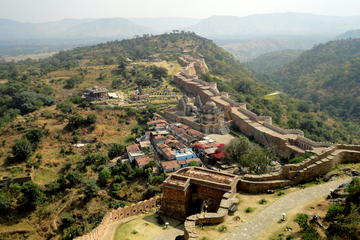 While most of the wall is intact, it is not advisable to walk over the wall since it is slippery thanks to years of accumulated moss. Certain sections of the wall have been cleaned and are safe for walking on. The tourism department, is making efforts to improve the situation, and has taken the first step by lighting up the fort at sunset everyday, a major attraction for tourists.

By Air: Udaipur – 82 kilometers is the nearest airport
By Rail: Udaipur – 82 kms, and Falna – 90 kms are the nearest railway stations. They are well connected to all major cities in India.
Road: Buses are not an option here, though you can drive down from Udaipur for a day. The roads are well maintained and very picturesque.

There are only a few options for accommodation in Kumbhalgarh itself.
– Club Mahindra Fort Kumbhalgarh: a well appointed resort, about 5 Kms from the fort.
– The Aodhi – this resort is nearest to the fort, just a kilometer away and is most favoured by foreign tourists.
– The Dera, Kumbhalgarh – this is a tented resort, 2 Kms away from the fort, where you can gain the unique experience of living in tents just like royalty.
– Kumbhal Castle

Photo credits:
First Fort Kumbhalgarh photo by Ashwini Chaudhary on Unsplash
All other photos are by Anuradha Shankar.

About the author:
A home maker and budding travel writer, Anuradha Shankar lives in India and loves to travel with her family. Taking every opportunity to explore known and unknown destinations, she writes about her travels on her blog, ‘A Wandering Mind’. Her greatest desire is to visit every corner of her beautiful country. See her blog about Kumbhalgarh at www.anushankarn.blogspot.com