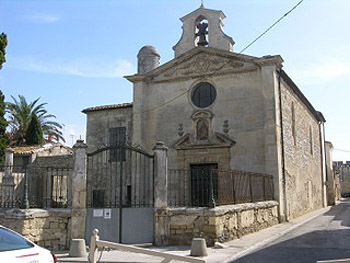 The name echoes ominous as if heralding some darkened castle from the Lord of the Rings; and the place does rise singular from the fen lands that are the Camargue in southern France. Yet there is no darkness weighing upon the shoulders this crusader city built as France’s first toe hold on the sunny Mediterranean.

It sits upon the horizon like a Cecil B. DeMille movie set but these ramparts and towers truly heard the tromping feet of grim faced, determined crusaders and the hum of medieval trade accommodated by the Mediterranean waters which lapped at its feet. Pass through the main gate, La Porte de la Gardette, and you emerge upon an ancient bricked street, Rue Jean Jaures, with arrow straight aim at the heart of the city, Place Saint Louis. 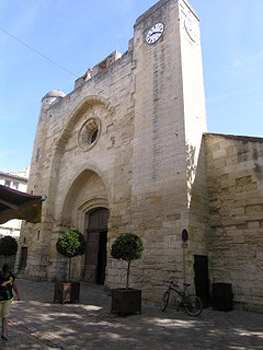 There is no better place to begin your exploration of this, too seemingly real, walled city. Here beneath the gaze of a serene statue of Saint Louis, actually King Louis IX of France, the city’s ascribed founder, you can sit under the shade of Plantain trees at one of the many outdoor cafes and ponder over the self-guided walking tour pamphlets available at the bordering tourist information centre.

The pious King Louis IX of France had no port access to the Mediterranean until he swung a deal in 1240 with the Abbey Brothers of Psalmody to get the fenlands upon which Aigues Mortes was to rise. His timing was ripe as in 1245 Pope Innocent IV called upon European powers to crusade in the Middle East. By 1248 he had his fortified town and port and set out upon his first crusade from these shores. Of the original fortifications only the singularly moated Tower of Constance remains.

Begun in 1240 and finished in 1250 the tower is the sole legacy of the original fort and has its own unique story in this storied town. It was known as Tour de Seigneur du Roi (King’s Tower) until it received its present name in the 14th century. From 1686 to 1768 the tower served as a prison for French Huguenots (Protestants) during the religious wars. Its most famous prisoner was Marie Durand who was imprisoned therein from 1730 until 1768, remaining true to her faith throughout. 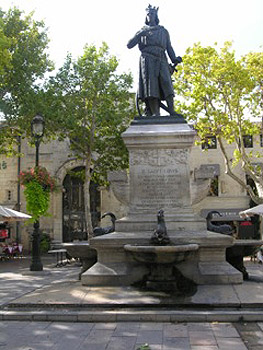 In 1270 Louis once again led his crusader forces from Aigues Mortes reputedly taking service at the still standing Notre Dame de Sablon (Our Lady of the Sands), alongside Place Saint Louis, ere departing. It was his last foray as he died within months from typhus on the shores of North Africa. His new city however fared much better.

The first Notre Dame de Sablon on the site dated from 1183 and passed through varying incarnations until it was used by Saint Louis in 1248 for departing services. Its fortunes rose and fell during the later religious wars, its roof collapsing in 1634, but it was finally reconstructed in 1711. Today its doors welcome the faithful and the curious; affording the opportunity to stand in the quiet and breath in the history, perhaps to close your eyes and imagine the sounds of Louis’s pious entourage accepting religious blessings.

And when you are ready you can begin treading the streets of the fortified town noting how past and present merge so easily. History seeps from the street names – Rue Victor Hugo, Rue de la Republique, Rue du 14 Juillet and city gates La Tour des Bourguignons (tower of the Burgundians where bodies of massacred Burgundian troops were salted and stored to avoid disease), la Porte de l’Organeau (where ships tied up in the city’s harbour), La Porte des Moulins (where two mills used to occupy the double tower) and La Porte del’Arsenal 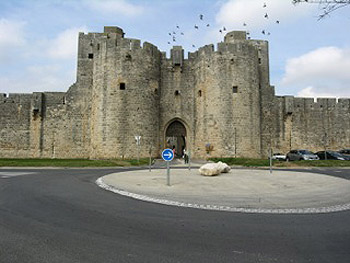 The inside perimeter walk takes you by 10 fortified gates which present the opportunity to pass outside the walls and admire the magnitude of the fortification in its setting. Outside Porte de la Reine you can see the last remaining Glaciere (cold storage site) ; one of the original three constructed in the 17th century.

For the serious visitor there are walking tours of the entire ramparts and the singularly impressive Tour de Constance. Self guided audio tours are available at the admissions office at Place de la Republique near La Tour de Constance. The considerable rampart walk is interspersed with exhibits at varying towers and gates lending image and life to the long silent stone. From atop the ramparts you can view the long horizon of the Camargue with its pools and canals, most likely spying one of the many tour barges wending its way through a vast fenland rich with waterfowl (most particularly Flamant Rose – Flamingoes) and ranch-lands where Les Gardian (French Cowboys) on their unique, white Camargue horses tend to herds of the famous black bulls of the Camargue. That is a tour for another day. And to the south the horizon glistens with the Mediterranean now far removed from the days when port waters lapped near the rampart walls. 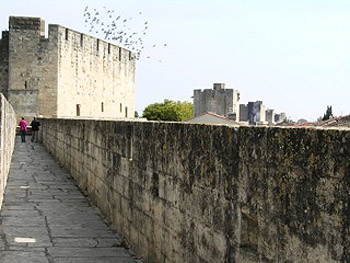 Crossing the only bridge spanning the moat surrounding La Tour de Constance brings you to the awe inspiring edifice which harkens back to the very beginnings of the Aigue Mortes fortress town. With the revocation of the Treaty of Nantes (a tolerance act allowing for French Protestants) in 1685 the tower began its long years as a prison. Exploring its bright rooms and walkways it takes some effort to recreate in mind the jailhouse conditions of so many years before. The tower rises above the rampart walls and is topped by an rooftop adorned with a beacon which once served the mariners as a lighthouse. From here you can see the encircled city in its entirety. Here, above the world, its long gone sentries could breath the light Mediterranean air likely much appreciated during odour rich Medieval era.

When Provence became part of France in 1481 Aigues Mortes lost its significance as France’s only eye on the Mediterranean to Marseille. Yet the town remained and comes down to us like a time capsule from the Medieval era. A place richly accommodating even under the press of tourism.

♦ Regular and frequent train and bus service is available to Aigue Mortes from Nimes.
♦ La Grau du Roi, on the Mediterranean, is within fifteen minutes on the train.
♦ Numerous Camargue tour boats, available on the canal, provide excursions through the Camargue, including Le Grau du Roi, visits to ranches where Les Gardian put on herding displays and the ever present flocks of flamingoes. 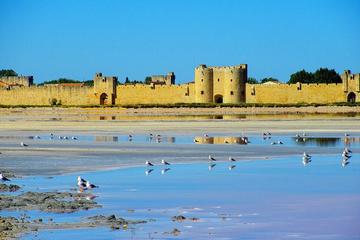 All photos are by Glen Cowley:
Church of the Gray Penitents
Notre Dame de Sablon – the Crusader Church
Place Saint Louis with the statue of King Louis IX still holding court
One of the gates of the fortress city
Atop the city ramparts