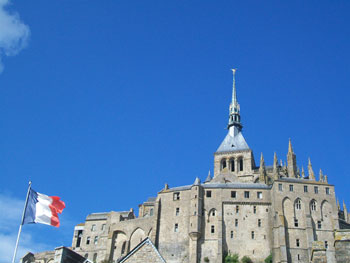 I once described Lisbon-Sintra’s Pena Palace as a ‘Disney castle resting in an environmentalist’s dream’ but after visiting Mont-St-Michel on the northern French coast this year I wasn’t surprised to read that it has actually inspired Disney movie castles. However, if the Pena Palace is a verdant vision, Mont-St-Michel is a marine masterpiece. 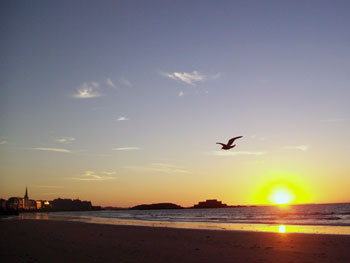 The ancient abbey rises out of sea and silt like the most triangular of mountains, seemingly balanced precariously on its rock without an inch of land wasted; and is big enough to be seen from the edge of its bay, over thirty kilometres (twenty miles) away. After I reached its public-access summit half way through my week-long holiday in France, Mont-St-Michel became the peak of my visit in more ways than one; a week that had started unplanned, and turned into an enjoyable trip down memory lane as well as one full of new sights.

Looking for a short-holiday destination, Dinard was the cheapest flight available from my local Leeds-Bradford airport, but I’d never heard of it. So I looked it up, and read it was a town in Brittany, on the northern coast of Europe; neighbouring the historic port of Saint-Malo, which I did know. I also knew that Mont-Saint-Michel was nearby; a face of France I’d wanted to view since first seeing its Gothic visage.

It was also twenty-five years since I hitch-hiked through France at the start of my travels: then, I’d traveled just south of Brittany and Normandy from Paris to Bordeaux. So I booked the flight, and on an early-September Saturday I flew over my past life to the aquamarine seas, golden sand and stately villas of northern France’s Emerald Coast. After flying over Wales, where I grew up, we left the south coast of England and flew over the Channel Islands. It was the first time I’d seen my birthplace of Jersey since leaving as a young child, about forty-four years before. 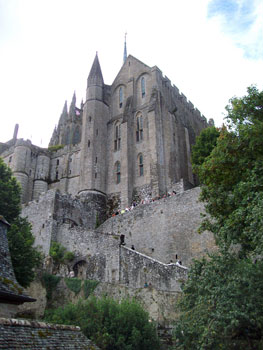 I relived some of my traveling past by hiking about 10km from the airport to my hotel, on the southern edge of Saint-Malo. The local bus service does not cater for the airport. I crossed the Rance estuary below Saint-Servan, which was called Aleth when a Welsh monk called Maclow became its bishop in the 6th century. It was from Maclow that a new community to the north took its name; Saint-Malo has since incorporated Saint-Servan within its city boundaries. Brittany still has a Celtic identity.

Seeing an Aldi supermarket along the way inspired another trip down memory lane. After booking into my hotel I returned to the Aldi; bought beer, bread and brie; and consumed them under a tree. Cars whizzed around the natural traffic island, but they were only reminders of my past; I didn’t have to think about getting a lift in the morning. The sun was more important to my immediate future, and I closely watched it slowly set through the overhanging branches and leaves; swallowing an evening’s thoughts into the tummy of tomorrow. 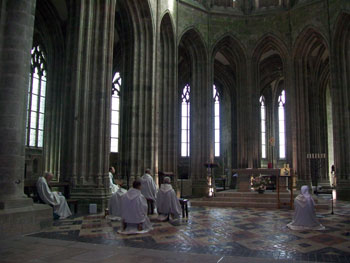 The next day I moved to Saint-Malo’s only hostel, which is ideally situated only two blocks from the Grand Plage: two miles of beach between the walled old town and the district of Parame. There hadn’t been any room at the hostel on the Saturday night. I spent the next couple of days getting to know the landmarks and beaches of Saint-Malo.

Saint-Malo’s walled old town looks more impressive the closer you get, and its visual impact is increased by forts and islands stretching out from its north-west corner to the horizon. Saint-Malo was itself an island before being linked to the mainland by a causeway. Its wall, which is seven metres thick in places, dates from the 14th century. Malouins had a fearsome reputation for pirating passing ships, and in 1590 not only declared Saint-Malo independent of France, but also from Brittany. Independence lasted four years. 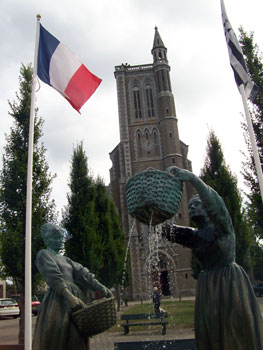 At low tide you can walk out to Fort National, Île du Grand Bé and Fort du Petit Bé. The former was built during the reign of Louis XIV in the late 17th century, and was named Fort Royale until the French Revolution a century later. It is open to visitors during the summer. Malouin writer Chateaubriand, cited as the founder of French Romanticism, is buried on Île du Grand Bé; a hilltop cross marks the site, and views stretching for miles to the western edge of the bay explain its Romantic reason.

Returning to the city wall, there are a couple of small beaches on the western front. Steps lead up into the narrow cobbled streets of historic Saint-Malo. More steps rise to the Bastion de la Hollande, where a statue of Saint-Malo’s most renowned sailor points out to sea. Jacques Cartier sailed to the Americas in 1534, and is probably the man most responsible for Canada now being known as Canada. ‘Canada’ derives from an Iroquoian word for village or settlement; Cartier heard the word after asking directions, and then adapted it for the whole region. Cartier sailed as far as modern Montreal in search of a north-west passage to Asia, and claimed ‘Canada’ for the French. 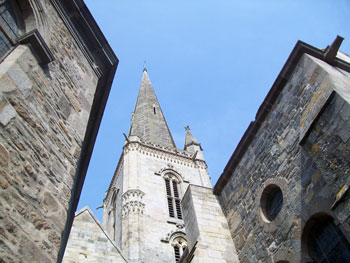 The cathedral is a central landmark and highlight, rising high above streets full of gift and clothes shops; crepe and seafood restaurants. Museums, a twentieth-century war memorial, and a central park are also of interest within the city walls; and regular plaques tell the historical significance of streets and buildings. Exiting the walls to the south, corsair sailing ships in the harbour are another reminder of the past.

Getting itchy feet, I did a circular 20 kilometer hike to Cancale and back on the fourth day, crossing the peninsula to the east on the D355 road, walking along the coast on the D276 and D76, and returning west on the D155. Mont-Saint-Michel’s silhouette was visible from the edge of the bay, about 30km away as the crow flies. The sea shone green in the sun, justifying the coast’s Emerald moniker. 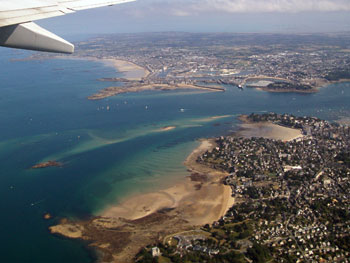 I took the coach from Saint-Malo to Mont-St-Michel at 9.15 the next morning. It is the only bus on that route, and a 20 Euros return ticket is required. The journey takes 75 minutes, and with the return leaving at 15.45 you have about five hours at the Mont. You cross from Brittany to Normandy on the journey.

A chapel was first built on the island then known as Mont Tombe in the eighth century. Legend says the Archangel Michel appeared before Bishop Aubert of Avranches and ordered its building; Avranches is a town on the eastern edge of the bay. Mont-Saint-Michel has survived fires and blockades over the centuries, with rebuilding and renovations increasing the size of the abbey to its present splendour. 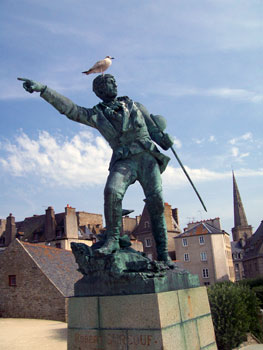 There were grey skies when we arrived, but the view was still spectacular. I walked up the narrow winding streets crammed with shops and tourists to the abbey gift shop, where you buy a ticket to enter the abbey and highest tier possible. On the ascent, the causeway linking the Mont with the mainland stretches out to the south, between the grey silt of low tide sea and the green vegetation of natural land; dividing the bay arcing to the east and west. To the north there is only the abbey towering above you, crowned by a golden Saint Michel statue.

After the gift shop, the last few flights of steps are indoors, before you emerge onto the western terrace, with the cathedral towering above you, and the north visible once again. People walking along the estuary silt looked ant-sized, and the bright emerald sea lining the horizon appeared incredibly distant. Upon entering the cathedral, I saw that a communion open to the public was soon starting, so I stayed for the hour-long service. After a monk rang the bells at midday, seven monks and nuns sang and spoke sweetly and serenely.

Then I slowly made my way down through the living-quarters of the abbey: great halls, narrowing chimneys, giant wheels, cavernous stores and colourful gardens all connected by spiraling steps. It seemed like no time at all before I stumbled into the back of the gift shop, surprised at the sudden end to my abbey experience.

Emerging once again onto the abbey hill, clear skies provided a contrasting view to the morning. The biggest difference was the Saint-Michel statue, which now gleamed in the sun against the blue background. I made the most of the time I had left, taking as much as I could in, before returning to the bus with five minutes to spare.

On my penultimate day I took the local bus to the quiet town of Saint-Briac-sur-Mer, via Dinard, traveling north of the airport; and spent my final day among the gift shops of Saint-Malo. I walked down memory lane once more before leaving, entering the airport the same way I’d exited it the week before. Although this time I only walked from Dinard, after busing it across the Rance. 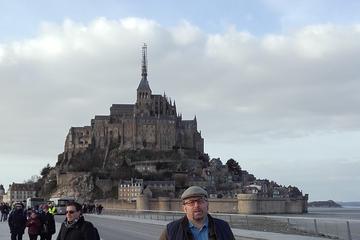 Marc stayed at the F1 hotel, where the rooms were €35 per night for 1-3 people (double and single beds) and the Patrick Varangot hostel, where dorm beds and breakfast were €21 per person.

About the author:
Marc Latham traveled to all the populated continents during his twenties, and studied during his thirties, including a BA in History. He now lives in Leeds, and is trying to become a full-time writer from the www.greenygrey.co.uk website. Marc has several published and self-published books available on Amazon.