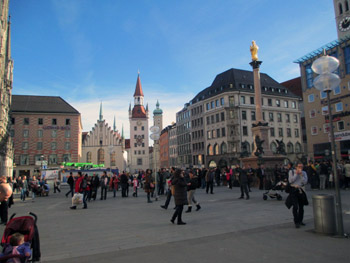 In addition to the chestnut lined beer gardens that fill Munich’s city center, there is a history which runs so deep that one can nearly taste the metallic remnants of 70-year-old bombs. Upon mention of Munich, Germany, the image usually conjured up in the minds of travelers is full liter beer steins, lederhosen, and pumping brass bands under a giant canopy tent. However, those who dare to look deeper into the city will find traces of one of the darkest times in the history of the planet and a city so fascinating, that even the biggest history buff’s heads will spin. 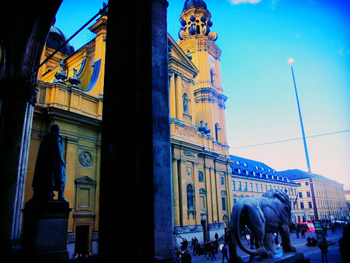 Instead of carrying around a thick guide book which forces visitors to stare down at the tiny print and flip pages, a great option for those seeking to learn about the war-related history is to sign up for Sandeman’s New Europe, Third Reich walking tour. For 12 euro, my journey through the dark history began at the center of the city, at the beautiful Marienplatz. Immediately, the tour guide, who was a walking treasure chest of knowledge instructed the group of 10-15 people to look up at our surroundings. After explaining how the majority of the area was completely bombed out during World War II, he pointed to the main spires of the Marienplatz, and the giant green domes from the Frauenkirche. He explained how the bomber jets from the allied forces used them as landmarks in their bombing campaign, therefore they were spared and remained mostly intact. Chills immediately shot down my spine, as I felt the realness in which surrounded me. This was real, and these were not events which took place in the Dark Ages; this was a time that our close relatives could have lived through. It was a time in which the desperation of the German people gave way to the rise of a former painter from Austria, and allowed Adolf Hitler to guide his people, and the world into a conflict that took the lives of nearly 85 million people. 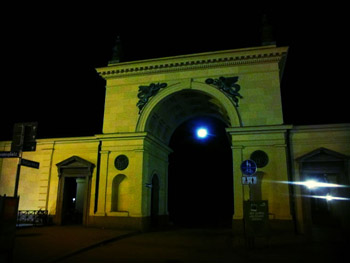 Walking through the streets of the 1,000-year-old city would lead most to believe that the surrounding buildings go back hundreds of years, but they would be greatly mistaken. Following the rise of Adolf Hitler in the early 1930s, Munich became the birthplace of the Nazi Party, and eventually one of the biggest targets for the allies during World War II. The result was thousands of bombs being droppedtact on the city, and to this day, an estimated 2,000 un-detonated bombs are still buried beneath the city. Since nearly 90 percent of the city was completely demolished, everything has been rebuilt, and reconstructed in the 70 years since to end of the war. While construction continues in the Bavarian capital, bombs are still discovered on a weekly basis, and teams have to come in to safely detonate the bombs which range anywhere from 4 lbs to 22,000 lbs. Our tour guide told stories how entire street blocks have to be closed, and entire apartment complexes cleared out when one is discovered. Life goes on, and the residents of Munich accept it as if it is nothing more than a minor inconvenience. 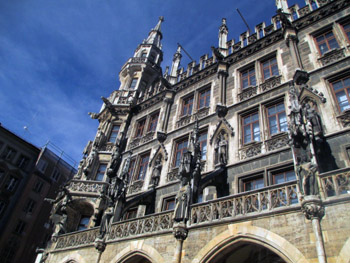 Prior to the air-raids by allied troops, Adolf Hitler was well aware that Munich would be a major target, and knew the city would be leveled. Planning ahead, he ordered photos be taken throughout the city, so that when the war ended, the city could be built exactly as it was prior to its near destruction. Following the death of Hitler and the fall of the Nazi’s, the German people voted to restore the city to its old glory, resulting in a complete rebuild. Since everything has been rebuilt, it gives visitors a unique perspective roaming the streets, and ducking into beer halls and cafes that fill the city. While the history is thick, and I could nearly feel it hanging in the air, it also felt like stepping into a movie set. Along the guided tour, we were taken to places of historical significance, such as the world-famous Hofbräuhaus. We were taken upstairs into the beautiful beer hall, and shown the place where the Nazi leader once spoke. However, the reality is that the building is a complete replication of the original, somewhat taking away some of the powerfulness which stood before me. It is fascinating, yet saddening how such beautiful architecture and sights were destroyed, but in spite of the restoration, there is still the ghost of the German dictator that echoes throughout the halls.

A trip to Munich to soak up some suds is well worth the trip, but visitors who fail to look into the deep, dark part of history would be cheating themselves. The city is filled with beautiful sights, friendly people, amazing food and beer, but taking a step back to explore the underground of the Bavarian capital is a must for anyone visiting. George Santayana once said, “Those who cannot remember the past are condemned to repeat it,” and there’s no place where this statement holds more truth than it does in Munich, Germany. 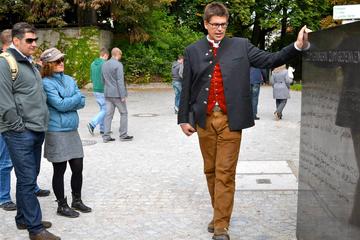 ♦ Sandeman’s New Europe Walking Tours: Other paid tours include: Dachau, Beer Challenge, Neuschwanstein, and a free walking tour around the city center. www.newmunichtours.com/daily-tours/third-reich.html
♦ The city is incredibly safe, so do not be afraid to explore a lot of it on foot.
♦ Use public transportation. S-Bahn and U-Bahn is very inexpensive and will take you anywhere you want to go in the city.
♦ Bavarian people are very friendly, but learning a couple of words will help make the experience even more enjoyable.

About the author:
Johnny Caito is a writer, travel, and craft beer fan from San Diego, California. When traveling, he finds nothing more exhilarating than meeting locals who can help him explore the areas beyond the guide books, and give him a glimpse into their world.

All photos by Johnny Caito.