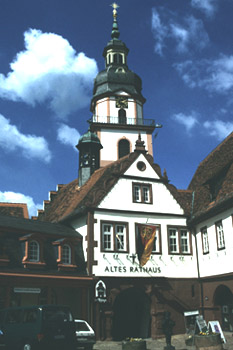 by Alf B. Meier

In the time of transition from the pre-industrial to the industrial era, many backwoods areas of Europe were rapidly declining into poorhouses. In some parts of Germany traditional skills were enforced by local dignitaries resulting in non-competitive products, famine and misery. 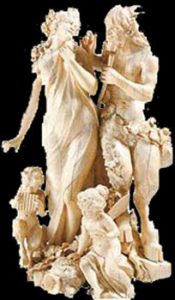 In the central German town of Erbach, on the other hand, Count Franz I of Erbach brought a new skill to his subjects – the art of ivory carving. In 1783, he founded the Ivory Carvers Guild of Erbach. The town rapidly moved toward prosperity, testimony of which is given by the town itself and the local museums.

The ivory used came from the teeth or tusks of elephants, sea lions, whale and hippos, each having different characteristics of layers and shapes. Until about 1850, the carvers mostly made containers from the ivory. Then they discovered ivory to be a suitable material for artwork and jewelry. In 1873, the Rose of Erbach was awarded the bronze medal at the World Exposition in Vienna. After that, the craftsmen of Erbach busied themselves making statues.

Descendants of Count Franz I founded the town’s School of Ivory Carving in 1892 and local museums are rich with examples of carvings of buttons, tools and implements, statues and even billiard balls.

In 1945, members of the Ivory Carvers Guild moved on to carving amber (which is not actually a stone as many people think, but rather fossilized resins from evergreens extinct for some 40 million years). The influence in this movement was sculptor Jan Holschuh, who’d learned the techniques at the Bernsteinmanufaktur (Amber Factory) in the city of Dresden.

In 1989, the import of elephant ivory into Germany was made illegal. Guild members substituted mammoth ivory, some two tons of which are found every year in Siberia. This allowed the art movement to continue. 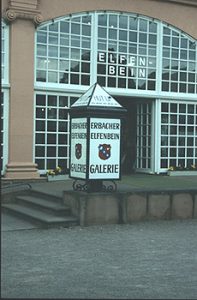 The German Ivory Museum in Erbach (located at Otto-Glenz Str. 1) is the only museum of its kind. The museum is open 10:00 am – 5:00 pm every day, but is usually closed Novermber thru February.The most memorable display shows the entire ivory art process – from rough sketches to finished, polished statues.

Tip: If you happen to buy knick-knacks or carvings as souvenirs in any of Erbach’s shops, just ask for a certificate proving the material. You may need it for customs.

How to Get There: It’s easy to reach Erbach by rail from Frankfurt/Main or Heidelberg. Driving by car from Frankfurt over the A9 takes about two hours. Once you’re in Erbach, you’ll find numerous signs for all points of interest.

The town of Erbach offers something for all the senses. If you’re able, get out and walk. Don’t miss the red sandstone palace with the gilded figurines. You can sip cool drinks sitting in the Lustgarten (garden), then visit the market square and explore the sandstone canal. Many tourists just wander the alleyways to take photos of the restored half-timber houses.

Although it’s way out of my price range, you can stay in a castle in Erbach. Schloss Rheinhartshausen-Kempinski offers 54 exquisite rooms and suites. The castle is booked well in advance. A single room goes for 275 – 1100 euro (about U.S. $424 – $1696) per night.

About the author:
Alf B. Meier writes from Karpathos, a tiny Greek island in the Aegean. In the past, he has worked as a commercial photographer and a war photographer. Presently he is finishing a book.
Contact: laugh@otenet.gr

Photo credits:
All photos are by Alf B. Meier.