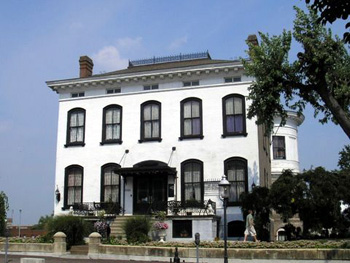 “Oh no, do I have to sleep all the way up there tonight?”

This is what I thought when I found out that not only was I going to sleep in one of the most haunted houses in this nation, St. Louis’ Lemp Mansion. I would be temporarily residing in the third floor attic, cut off from the other guests.

As I walked up the two floors via the long flights of stairs through the lightly musty hallways ready to face my fate for the evening I was full of trepidation.

It would turn out to be one of the most horrifying nights of my existence, some of it brought upon myself. I didn’t need to feel the presence of someone watching me, or see objects moving by themselves, or hear the ghostly footsteps, that have been reported so many times by others, because my own mind was filled with a wild imagination for the scariest possible outcomes! 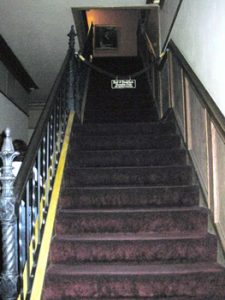 John Adam Lemp was one of America’s first beer magnates. He began in St. Louis as a grocer, but his beer sales would become the prime focus by 1840. He’s purported to have produced the first lager beer in St. Louis, forming the Western Brewery. John’s son William took over, and by 1870, the Lemps had the largest brewery in St. Louis and were one of the first breweries to have a national patronage because William implemented refrigerated railway cars to ship beer outside of the St. Louis area. In 1892, this operation would be known as the William J. Lemp Brewing Company.

The thirty-three room mansion that is the focus of so much ghostly activity today was bought in 1876 by the Lemps. William’s daughter Hilda married Gustav Pabst of Milwaukee, creating a powerful beer alliance in 1897. But the good times for the Lemps were about to end, and tragedy would begin to assault the family.

In 1901, William’s son Frederick died mysteriously. In 1904, heartbroken William shot himself in the head. William “Billy” Lemp, Jr. became President and moved into the mansion when mother Julia died in 1906. More bad times were on their way: Prohibition would be the catalyst in shutting down the brewery in 1919. Then Billy’s sister, Elsa Lemp Wright, who was like a Paris Hilton of her day, committed suicide in 1920 due partly to terrible insomnia. She shot herself in the heart on the Lemp mansion property.

In 1922, the grand ten city block brewery of the Lemps near the mansion grounds was sold for just under $600,000 to a shoe company. It had once been valued at seven million dollars. As a result of this firehouse sale, Billy shot himself in the heart in the former brewery office, to the left of the main entrance of the house, which is now a dining room for those guests who partake of morning breakfasts. Brother Charles would take over the mansion and live there until 1949, working as a financier and political influencer of South St. Louis, when he, too, shot himself to death in the head, dying very lonely and bitter. He was the only Lemp to leave a suicide note, and it was succinct: “St. Louis Mo/May 9, 1949,/In case I am found dead blame it on no one but me/Ch. A. Lemp.” 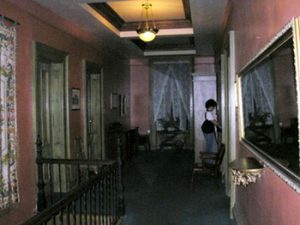 I knew all this history before deciding to visit the Lemp mansion, fascinated that I would stay overnight in such a ‘haunted’ place. But when the day came for me to go there, I began to worry. What if I did see a ghost, and it scared me to death? Watching one of my favorite horror movies The Shining, a few days before my trip to St. Louis, only caused me to feel more anxious.

For a home with such a history, very little of the Lemp furnishings remain in the house save some clothes and boots of Billy Lemp’s ex-wife Lillian. This is because another Lemp child, Edwin, who actually lived to be 90, ordered a vast amount of the family heirlooms destroyed upon his death in 1970 to help rid the family curse. I wasn’t concerned with the heirlooms as much as I was at turning the corner and (potentially) seeing a ghost or ghosts right before my eyes.

I unpacked my luggage, then sat in my room called The Louis Suite. The rooms are named after various members of the Lemp family. (Louis didn’t kill himself but died of natural causes.) I stayed there awhile, getting a respite from the hot St. Louis summer afternoon and realized that I wasn’t feeling scared at all. I kept telling myself that this house doesn’t give off any strange vibrations.

I watched some television before going out for the evening arriving back just before 11 p.m. All was eerily quiet. There were no night employees or phones in the room, so I felt isolated, given that the attic only has three rooms. One of them was unoccupied, but the other room next to mine didn’t have any sounds coming out of it. In a state of heightened anxiety, I kept my door wide open and put my backpack against the door.

I worked on my computer, and kept turning my head to check the open door. I thought I was catching glimpses of apparitions, but if I did, they disappeared quickly. Then suddenly, I heard a loud clanging noise. It didn’t stop.

“Oh no, the ghosts are going to get me all alone up here,” I thought, and I ran out my room and down the hallway. all the way to the end. And there I saw that it was only a man scraping ice out of the ice machine. 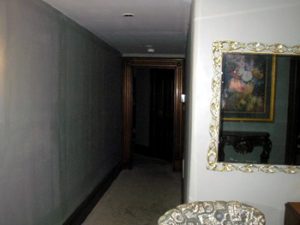 The man told me that he and his wife had stayed at the mansion some fifty times. He said that the attic had just been made usable for guests in the last year or so, and that séances had been held up here since this part of the house was the most haunted. He said he has heard gunshots, ballroom music, and ghostly voices during his stays at the mansion and his wife had actually seen a ghost.

He told me told that a “Monkey-faced” boy, the son of Billy Lemp, who spent his life confined to the attic (where I was bedding down for the night), still haunted the mansion. This boy had Downs Syndrome, and was basically neglected by the family. People have reported seeing his apparition peeking out of the attic’s tiny windows.

After talking to the man for around ten minutes, I decided to take some pictures of my room and the hallway to see if I could catch some images of orbs or apparitions. Some of my pictures did capture orbs. One photograph of the hallway mirror appears to have a light outline of a ghost, the size of a child’s body! Could that have been the unfortunate “Monkey-faced” boy?

A little after midnight, I decided that if the ghosts were going to get me, let them, because I needed to get some sleep. So I closed the door and went to bed. I tried to sleep, but with no avail. All I could think of was what would happen when I closed my eyes. I tossed and turned with the ceiling light and fan on above me, feeling a bit of a chill even under the covers. Later, I decided to turn the fan off, but when I stood on the bed, I saw blinking lights through the glass window above my door. I boldly went to my door, and opened it. Someone or something turned off the hall light, and in the shadows, a woman appeared.

“Oh, I’m sorry.” I said to the apparent guest from the next room. She didn’t look like a ghost, as she stood next to the doorway of the room next to mine.

“That’s okay,” said the woman. I shut my door wondering if she were taking pictures of the hall as I saw flashes go off. I didn’t feel scared when I saw her, but a tad relieved that I wasn’t totally alone in the attic.

A little after 5 a.m., after more tossing and turning, I decided to get up and head to a nearby coffee house. When I opened the door, the hall light was on again. No one was present, and I scurried out of the deathly quiet mansion fearful at every turn, trying to make it to the back door, the only way accessible to guests after the staff leaves at night. Would the ghostly Doberman Pinscher that Charles Lemp shot before killing himself try to scare me out of my wits somewhere along the hallways or stairways as I made my escape to freedom? Fortunately, nothing happened.

I arrived at the coffee house ten minutes later.

“Do you have anything that is soothing?” I asked the waitress. “I stayed overnight at the Lemp Mansion, and my nerves are shot.”

“We have a Chamomile tea that’s good for that, I’ll make you one,” she said.

The tea helped calm my nerves, and with some quality time in the lively civilization of the coffeehouse, I felt much better.

Back at the mansion, during breakfast, I shared my overnight experience and pictures with some other guests. They found my night of trials very interesting.

I won’t forget my experience at the Lemp Mansion. Especially since I did a better job of scaring myself than the ghosts did! 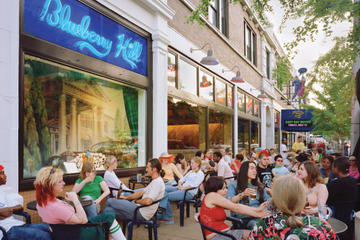 About the author:
Roy A. Barnes is a past contributor to Travel Thru History and writes from southeastern Wyoming. His travel articles have also appeared at Transitions Abroad, Bootsnall.com, GoNOMAD.com, Live Life Travel, Cyber Oasis, and others.

All photos are by Roy A. Barnes.