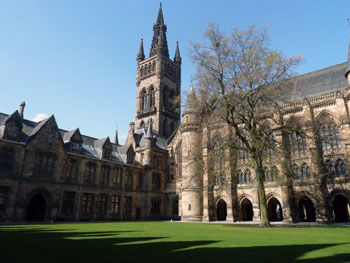 A Tree, The Bird, The Fish And The Bell: A Boy, A Church And A Cemetery

Think of Glasgow and what do you think of: the Glasgow kiss (a greeting with a head butt), alcohol-fueled street brawls, sectarian violence between Celtic and Rangers supporters and thick, threatening, indecipherable accents. You might think of a sprawling urban mess, notoriously dysfunctional high-rise flats, 70s concrete monstrosities and dark, forbidding sandstone Victorian tenement buildings and other utilities blackened by decades of pollution. Poverty. 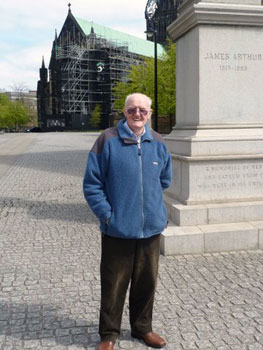 Glasgow has had its ups and downs. It’s easy to forget it was once called the ‘Empire’s second city,’ it was a thriving industrial city full of sea merchants, shipbuilders, tradesmen, entrepreneurs, inventors, ground-breaking scientists, artists and intellects.

Nowhere is this more evident than at the Necropolis in the Cathedral Quarter. I went there as a tourist and unwittingly returned my father-in-law to the place of his birth, finding myself touching a personal past. I had no idea. He lived in the shadows of the Cathedral and the atmospheric Victorian cemetery, a child of poverty among Glasgow’s great and good.

The cathedral area was Alan’s stamping ground. The gates of the Necropolis were kept locked, no doubt to keep young scallywags like him out. Hardly a deterrent, the street kids scaled the railings and crept in regardless, sometimes tearing their clothes on the railings. Once they dared each other to enter the cemetery after dark. They crept through Celtic crosses, obelisks, toppled urns, headless statues and mausoleums. They crept past writers (including the author of Wee Willie Winkie) and sculptors, rich industrialists, sea merchants and esteemed churchmen and a towering John Knox. Near the bottom, they saw a shadowy old woman attired in black. They glanced away and looked back again to find she was gone. The boys scarpered. My father-in-law, a man not usually given to flights of fancy, swears she was a ghost. 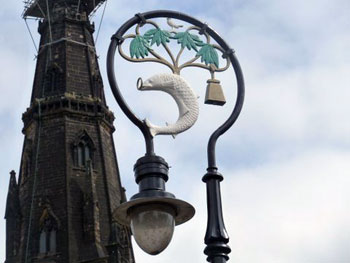 The Necropolis lies on a hill overlooking the city. All of Glasgow stretched out before us: the Tennent’s brewery close by, isolated tenement blocks, smaller brick-built houses, concrete offices and wind turbines on the moors, far on the horizon. Alan pointed out the place where his tenement home had once stood, long gone now. It had survived an incendiary bomb during the war (His mother, an ARP warden, had hosed down the fire in the attic herself) only for the building to be later demolished.

Atop the hill, a Victorian high-rise city of the dead, Glasgow’s elite sought to outdo their neighbour: with the largest family vault, the highest monument, the best quality stone, the most detailed mason work, the grandest sculpture or the finest inscription. 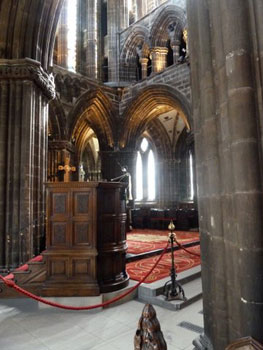 The gravestones are filled with story and history. I could have spent hours there uncovering lives like John Ronald Ker’s: accidentally drowned while shooting wildfowl from a small boat off Contyre of Ronaghan at the early age of 21 – of a generous and amiable disposition and endearing qualities which made him so agreeable a companion, so good and true a friend. (July 1868)

Making our way back down the hill, Alan showed us a wall with a 30 foot vertical drop. He and his pals had once skidded to an abrupt stop here as they had tried to out-run a police officer. The policeman caught up with the ragamuffins and apprehended them, taking delight in reading out every detail of graveyard vandalism over the entire week, although the boys’ singular crime had been ‘breaking and entering’.

We slipped out of the cemetery, over ‘the bridge of sighs’ into the cathedral. It’s an imposing Gothic church built in the Middle Ages. Saint Kentigern (more widely known as St Mungo) supposedly built the first Christian church in Scotland here. The tomb of the saint lies in the lower crypt. 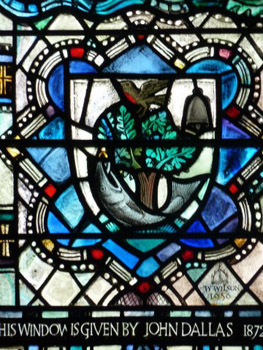 A stained glass tells the story of St Mungo and the miracles associated with him (symbols that form the Glasgow coat of arms):

Alan called us over to show us a neatly hand-scripted list of parish servicemen who had lost their lives during the war. He pointed to one of the names on the list: Driver: C Findley RASC, and said: “My brother-in-law”. 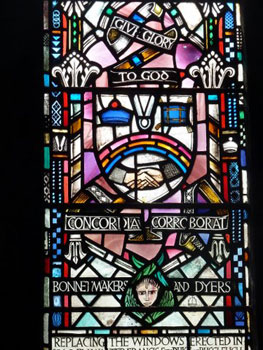 “I know,” said Alan. “It’s a mistake. Charlie took great delight in showing people his name on the memorial, claiming he was one of the living dead. He thought it a great joke.” “But how did he end up on the list?”

“When he was evacuating to Dunkirk, on the run from the Germans, his truck took a wrong turn. He ended up on a beach some miles adrift from Dunkirk. Missing, it was presumed he was one of the Dunkirk dead.”

Glasgow survived the heavy bombardment of the Second World War and the decline of its manufacturing base, and is on the up again. It’s no coincidence that Glasgow was chosen to be ‘European City of Culture’ in 1990. Since then Glasgow has gone from strength to strength. 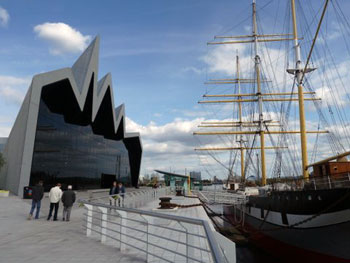 We visited the Clydeside, currently being regenerated with its smart new Riverside Museum, a theatre – the Armadillo, and the science museum tower. Over in the West End we discovered a vibrant hub of fine eateries, trendy boutiques and night clubs set among the cleaned-up sandstone Victorian buildings; handsome historic university buildings and museums set in leafy parks and hilly bluffs.

We ate in ‘The Black Sheep’ and ‘Two Fat Ladies’ and tasted some of the best food I have ever had. Yes, Scottish fare: tatties and neeps (potatoes and turnips), haggis, black pudding and sticky toffee pudding; food that was surprisingly light and full of flavour .

Glasgow: unpretentious, vivacious, humorous, plain-speaking, rough at the edges, but ultimately warm and generous, (A bit like my father-in-law, I discovered) – yet witty and intelligent. Go there, and you might have to rethink your view of the city. I had to. 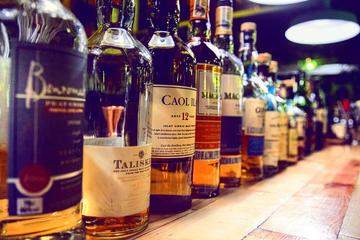 Glasgow International Airport is only 8 miles from the city centre and is well served with taxis and buses. In Glasgow itself, getting around the city is easy with a comprehensive network of buses, trains and the underground railway system, known locally as “The clockwork orange”. It’s worth taking a coach up to The Trossachs and Highlands, just a stone’s throw from Glasgow. The hills, lochs and the pure clear northern light are the perfect contrast to the bustling city.

About the author:
Helen Moat is a British teacher and travel writer. She has won several travel writing competitions, including runner-up with the British Guild of Travel Writers, and has been published in The Daily Telegraph. Her greatest passions in life are music, travel and writing (not surprisingly).
Find other travel pieces by her at: moathouse-moathouseblogspotcom.blogspot.com