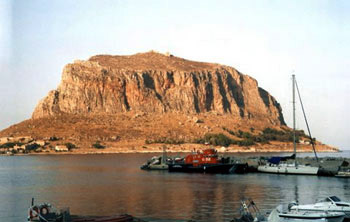 Castles In The Sun 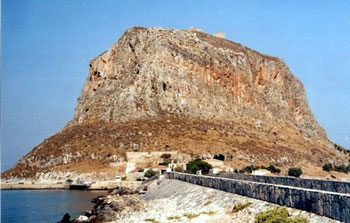 Hidden on the slopes of a great rock known as the Gibraltar of Greece, Monemvasia is one of those rare treasures that tourists usually by-pass. It’s a magical experience visiting this little medieval site. The entire town is walled and invisible from the shore. The steep rock, crowned with its Venetian fortress, is connected to the mainland by a narrow causeway. Motor vehicles are prohibited, but a mini bus takes you free of charge to the old city gates.

Monemvasia was my first stop in the Peloponnese on my quest to visit Venetian castles. As I entered the L-shaped tunnel, through the thick stone vaulted gateway I was immediately transported into another age. The narrow cobbled streets wind up the side of the rock. Many of the old buildings are restored in the ‘new town’. A few are small hotels and there are interesting little shops and cafes. Farther up most of the old town is in ruins, except for a few houses like the home of Yannis Ritsos, who was one of Greece’s most well-known poets.

Known in medieval times as the “Rosemary of the East,” Monemvasia got it’s name, which means “Sole Entrance,“ because the only entry is through the fortified tunnel. The town itself is completely walled and not visible from the shore. The Venetians called it Malvasia. It became renown for the excellent wine produced there.

The city was occupied by the Venetians in 1417 after pirate raids caused the inhabitants to ask for their help. Lying on an important trade route it was an attraction for the pirates who took not only merchandise and animals, but people who were sold as slaves. When Venetian power began to wane in 1719 Venice sold it to the Turks for 30,000 gold florins and the people were forced to relocate. Later when Turkey declared war on Venice the city was recaptured. 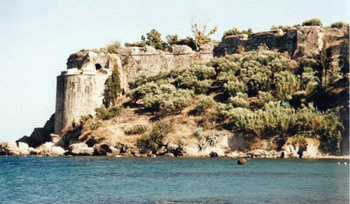 From Monemvasia I took the early morning bus heading for Koroni, another Venetian town. After a circuitous route through Sparta, I arrived at Koroni that evening. The castle of Koroni was lit by a mystic green light. Above its turrets, Mars blinked its red beacon; a crescent moon illuminated the sky over the twinkling lights of the village; little kaikis bobbed on the moonlit sea.

I chose a pleasant sea-side taverna and took a table nearest the water to enjoy a meal of tender kalamarakia (squid) and marouli (lettuce) salad served with capers and olives, and a half carafe of krasi aspro (white wine). While I dined I was serenaded by a trio of Romanian musicians.

Koroni is a delightful old Venetian town. Its narrow cobbled streets and stairways, lead up to the castle most of which is now occupied by a convent. Once it was a Venetian naval fortress located on the Messinian Gulf protecting the Venetian waterways. Like its sister cities Methoni and Monemvasia, it was an important urban settlement, of strategic importance during the Middle Ages as a port for Venetian ships headed East. 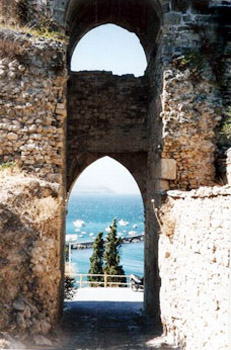 The old town of Koroni has long since fallen into ruin, but the Venetian architecture has been preserved, with wrought iron balcony railings, arched windows and doors. The largest, two-storied mansions and public buildings are on the waterfront, while higher up are the smaller Laika (folk) houses with small inner courtyards. One distinctive feature of the Koroni houses are the curved tile roofs and unusual terracotta eave decorations: instead of the usual palmettes, these are like small winged angels.

Koroni’s beaches are an important nesting area for the endangered and protected loggerhead sea turtles, caretta caretta. These turtles have been nesting along the coast of the Peoloponnese for thousands of years. The females return to the beach where they were hatched to lay their eggs. There are about 800 protected nests on the beaches in this area. Unfortunately I didn’t see any of these rare turtles as their hatching season was over mid August.

It’s a twenty minute hike to get to the fabulous Zaga Beach, which is a long curve of sandy shore behind the hillside. It was well worth the effort to get there and I spent a glorious afternoon lounging on a beach chair and swimming with a view of the castle above.

I would have liked to stay much longer in Koroni, but remembering my quest for castles in the sun, I set off for Methoni. 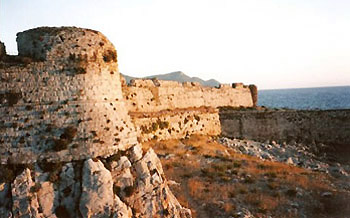 Which set of the many instructions, bus schedules, and info that I was given by Greek locals would prove to be the right one? After various suggestions I decided to go with the English speaking baker who even drew me a map to explain which village to get off to catch the bus to Pylos/Methoni which, he said, went past every hour. According to his directions, I disembarked at the cross-roads at a village called Rozymalos and waited at a kafeneion for just over an hour until the bus finally arrived.

The baker‘s instructions were wrong. The bus wasn’t going to Methoni. Instead, I was dumped off in the town square of Pylos. End of the line. Eleven kilometers to go. Fortunately I have enough rudimentary Greek to ask directions. A pharmacist explained that the bus depot was right across the street and the Methoni bus runs often. So I had a tiropita and iced tea and waited.

When I eventually arrived at Methoni the town seemed deserted. There were no taxis in sight, it was mid-afternoon and all the Greeks were having their siesta. I saw a sign pointing “to the beach” and followed the road until I saw “Methoni Camping.” I set up my tent at the campsite, and went to the beach for a swim. The beach appeared to be all stones, sloping down into the sea but the sea bed was pure sand. Not a stone or a shell and no sea-weed either! Farther along the beach I got my first glimpse of Methoni’s immense castle.

Methoni is one of the most historic regions of the Peloponnese with a long cultural history. The ancient city Abeloessa Adassos was mentioned by Homer as one of the seven cities that Agamemnon offered Achilles to appease his anger after Agamemnon had ‘stolen’ Achilles’ favourite woman. It has always been an important port for ships and travelers on the Mediterranean. The port was strategic in the Middle Ages and with Koroni, guarded the Venetian sea-ways. 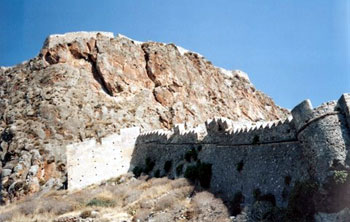 Methoni’s 15th century Venetian fortress expands over the whole area of the south west cape. Built over ancient walls, it was the prize of many invaders over the ages. The walls loom imposingly over a setting filled with memories of the past. The castle has a protective moat on the land side and is surrounded on three sides by the sea making it impenetrable.

I spent a day exploring the ruins. There are many spooky chambers, underground passages, cisterns, a ruined Turkish mosque and hamam, a cathedral and crumbling houses. A stone causeway leads out to the small octagonal Bourtzi castle on an adjacent islet. The coastline is jagged. Sharp rocks like teeth jut up from the sea. I wondered how many ships had floundered and smashed on those rocky shores?

The medieval port town which stood within the fortress walls was the Venetian’s first and longest-held possession in the Peloponnese and a stop-over for pilgrims en route to the Holy Land. The twin fortresses of Koroni and Methoni were known as “The Eyes of the Serene Republic”.

The town of Methoni itself is a traditional settlement of Venetian-styled houses and cobbled streets and unlike Koroni, is built on flat ground with two broad central streets. In the Middle Ages it was a hub of commerce, but now it’s a sleepy little town, quiet and friendly.

The tourist season was winding down, so there were few people around. It was my final evening in Methoni so I decided to have a sunset picnic. I packed a little picnic lunch: and a half litre of krasi to drink from a plastic wine goblet. I took along Italian music just to keep the Venetian theme.

I sat at the end of a ruined wall and watched the sun being swallowed by the sea. Traces of brilliant pink clouds hung over the horizon and opalescent beams of light shot eastward from the horizon. The wine-dark sea (yes, Homer was right. It is!) was dappled with the last of the light. A half moon was visible over my shoulder, and behind me the castle ramparts. It was sheer magic. What an unforgettable way to spend the last night of my Venetian castles tour. 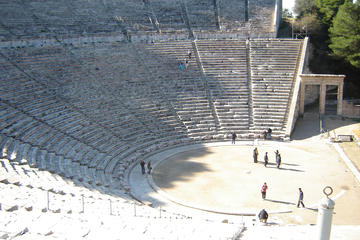 Accommodations:
Hotels and domatia are available at all three cities.

Monamvasia: The medieval town is inaccessible to cars and motorcycles. A free shuttle bus operates between the causeway and old Monamvasia from 7.30 a.m. – 10 p.m. June to September.
Koroni: The old castle is occupied by the Timios Prodromos Convent. You can stroll free in the small promontory below the castle.
Methoni: Entrance to the fortress is free. Open 8:30 – 5 pm. Tues. to Sat. and 9 – 5 pm on Sunday.

About the author:
W. Ruth Kozak is a travel journalist and historical fiction novelist. She got interested in the Venetian connection in Greece while traveling around the country on research trips and realized there was much more to Greece than the popular Classical and Bronze Age ruins. There are many castle ruins scattered throughout the country and islands and they are all well-worth taking the time to explore. She is the former editor and publisher of TravelThruHistory.com.

Photographs:
All photographs are by W. Ruth Kozak.