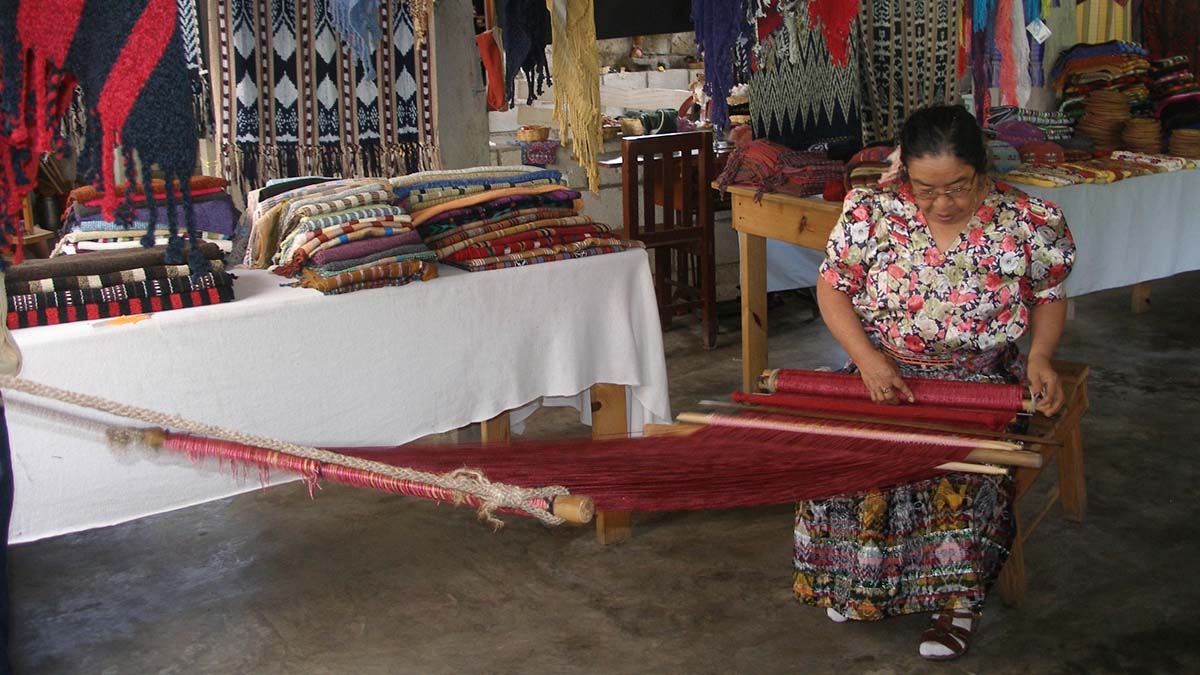 Lake Atitlán, nestled within the fog-shrouded mountains of the Guatemalan highlands, is graced with twelve towns scattered around its periphery like the pearls of a necklace. Over 90% of the inhabitants in the area are indigenous people but you will not find any Mayan ruins here because these towns were all established during the Post-Classical Period. You can develop a flavour for the area by taking a boat ride to the three towns of Santiago de Atitlán, San Juan La Laguna and San Pedro La Laguna by way of Panajachel, your gateway to the lake.

As we crossed Lake Atitlán by speedboat towards the town of Santiago de Atitlán, Alex, our guide, quietly informed us that this lake was once a volcanic caldera, formed some 84,000 years ago. The caldera imploded on itself and was subsequently drained of its magma. The present day lake is set against a backdrop of three volcanoes named San Pedro, Tolimán and Atitlán on its southern shore. With a little imagination we could almost see images of these volcanoes reflected on the mildly choppy water. Since the winds become notoriously strong on the lake in the afternoon, this was likely to be the best image we would see of the three cones on the water. What Alex didn’t say was whether or not these volcanoes were still active.

Arriving at Santiago de Atitlán, a former Mayan capital, we swapped the speedboat for a tuk-tuk and raced through the narrow streets to our first stop – the local shaman who is the people’s intermediary with the local Mayan gods through a statue of Rilaj Mam known as the grandfather to the people. 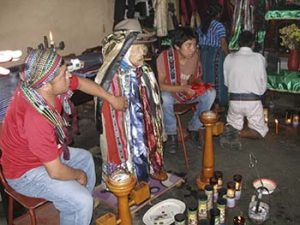 Entering the room we found the shaman sporting a colourful scarf on his head. Set on top of an altar, next to the shaman, was Rilaj Mam decked out in colourful silk scarves and a gray Stetson. The scarves are changed regularly and each one is said to represent a miracle that he has performed.

Suddenly the shaman took a mouth full of rum from one of the nearby bottles and sprayed it all over a statue. He then followed that up with a lighted cigar which he carefully inserted into the statue’s mouth. The shaman repeated this offering roughly every 10-15 minutes. For some strange reason the thought of an alcoholic statue with lung cancer flashed through my mind.

Alex outlined the evolution of the Mayan saint named Rilaj Mam. The Creole population knows him as Maximón (pronounced Maa-shee-mohn) and he is San Simon to the local Catholics. The Roman Catholic Church does not approve of the worship of Maximón. The shaman circumvents this by including a second altar with statues of the Virgin Mary flanked by two saints on top. Nearby was a well-dressed Jesus nailed to a 6-foot tall crucifix that was leaning against the wall. I did not see the shaman offer Jesus any rum or cigars.

After saying goodbye to the shaman, our tuk-tuk carried us outside of town and to the summit of a mirador (viewpoint) overlooking Santiago de Atitlán. We had a spectacular view of the San Pedro volcano in the distance which rises to a height of 3020 meters. After admiring the view of that mountain, we looked below us to find a number of Mayan women doing their laundry in the lake as they have done at this site for centuries. 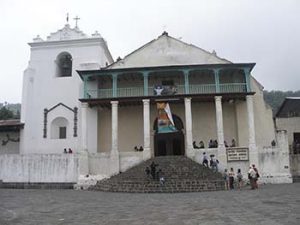 After a hair-raising tuk-tuk ride back into town, our driver left us at the square in front of the Church of St. James the Apostle, built between 1572 and 1581, with its dingy yellow exterior. The present structure was not the first church to occupy this site. The first was built by the Spanish in 1541.

The Mayans who actually built this church might have secretly commemorated the temple that once stood on this site when they included a flight of 20 steps leading to the front door of the church. A single month of the Mayan calendar consists of 20 days. 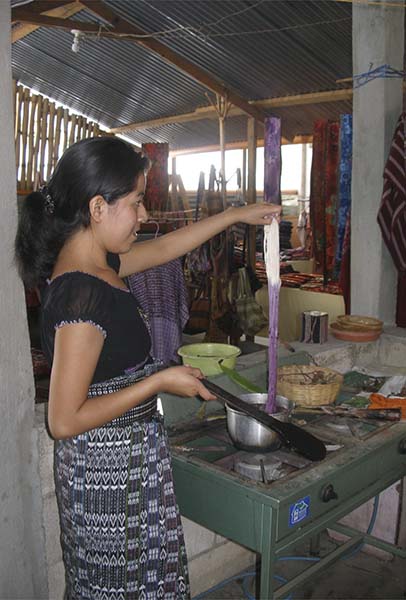 Entering the church, the yellow walls running the length of the building are lined with wooden statues of various saints. Each saint sports unique garments produced by the local women. Looking toward the apse you find three altarpieces representing the local volcanoes. Alex conspicuously pointed out a carving of Maximón at the base of one of the columns supporting the roof.

Exiting the church, we returned to the speedboat for our next destination – the sleepy little village of San Juan La Laguna which is known for the colourful textiles produced by the local women’s cooperative. The members of the cooperative produce hand woven cloth using the traditional Mayan waist loom and natural dyes from the local plants. Inside the cooperative, don’t be surprised to find one of the women seated on the floor with a strap around her waist in order to hold a loom suspended between her and a nearby post. [TOP PHOTO] You will notice that she constantly repositions herself so as to maintain the tension in the warp and weft as she weaves.

San Juan La Laguna is also known for a number of local painters. You will not only discover art galleries filled with paintings capturing the local scenery but you may also find murals on some of the buildings are you wander through the narrow streets. 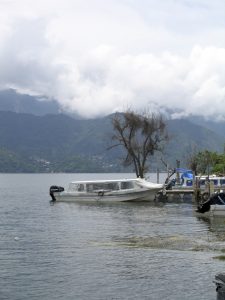 Your final destination by speedboat is the quiet little town of San Pedro La Laguna, set at the base of the volcano of the same name. Upon our arrival we jumped out of the boat and went directly to the Café Cristalinas. Once inside, the staff told us about the different Guatemalan coffee growing regions and the differences in taste. We sampled some freshly roasted Arabica coffee and cocoa beans, both of which are grown on the nearby slope in the rich volcanic soil. Combine these taste sensations with the panoramic view of the lake from the open-air cafe and there is nowhere else that we would rather have been at the time. But paradise is sometimes fleeting and we had to return to Panajachel, but not before we purchased a pound of dark roast coffee. We had just enough time to put the coffee into our backpack and jump into the boat before it left.

The water was noticeably choppier than it was this morning as our boat skipped over the waves en route to Panajachel. Upon arrival at the dock you will likely have a few minutes to visit some of the stalls lining Calle Real in search of that perfect souvenir if you weren’t able to do so at any of the previous towns. Unfortunately we had to tear ourselves away from the laidback Panajachel lakefront and return to Antigua but not before thinking that Lake Atitlan would be a relaxing retirement destination someday.

You can arrange a tour to Lake Atitlán as a daytrip from Antigua. Reservations can usually be made at your hotel. The boat ride to each town is included in the tour.

Admission to visit Maximón is 2 Quetsals. You can take his picture for 10 Quetsals. It is not possible to provide an address for where Maximón is located because this changes every year.

Admission to the Church of St. James the Apostle (Iglesia Parochial Santiago Apostol) is free. 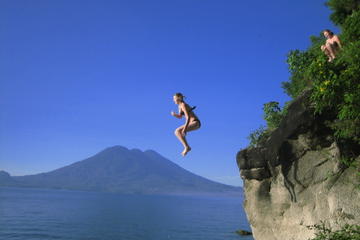 Lake Atitlan Off The Beaten Path: A Day Full of Adventure from Antigua