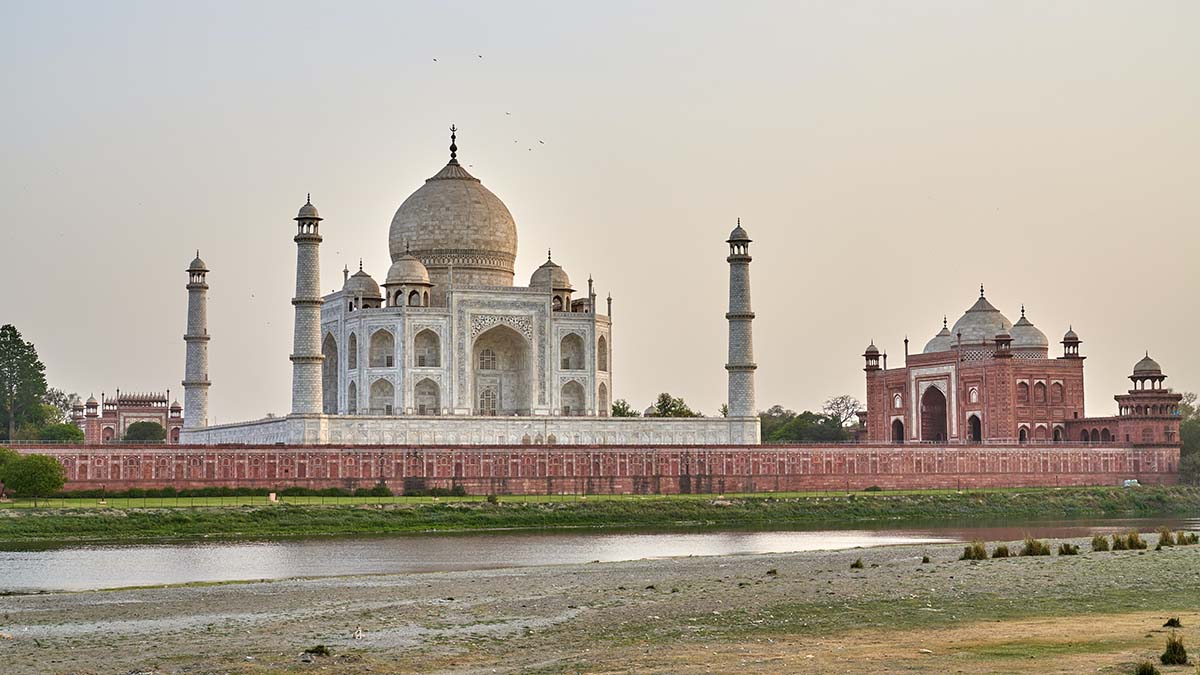 Treasures of a Bygone Empire 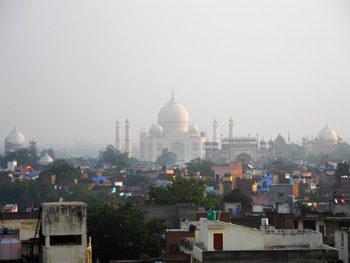 The city of Agra in North India is synonymous with the Taj Mahal, the apogee of Mughal architecture in India. The Mughal Empire was founded by Babur in 1526, a descendent of Timur (Tamerlane) and Genghis Khan. Babur reigned from 1526-1530. He was succeeded by his son Humayun. But the Mughal Dynasty truly flourished under the rule of the emperors who followed Humayun, his son Akbar (1556-1605), Akbar’s son Jahangir (1605-1627), and Akbar’s grandson Shah Jahan (1628-1658), known as the builder of the Taj Mahal.

On a recent trip to New Delhi, we decided to visit this wonder of the world. I had visited the Taj once before years ago and now I wanted my daughter to experience it. But there was also a slip up on the earlier trip that I wanted to rectify. Along with the Taj Mahal, Agra also has two other marvelous specimens of Mughal architecture which I missed visiting on that earlier trip. They are the Agra Fort and Sikandra, two shining examples of Mughal legacy. 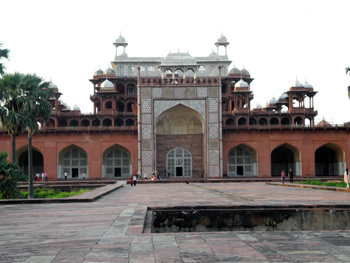 On a hot, summer day in August, with temperatures reaching 100F, we traveled to Agra from New Delhi in a rented car with driver. This is one of the best ways to go to Agra in the hot months as taxis such as these are air conditioned and one can travel in relative comfort. Our first stop was at Sikandra, the mausoleum of Emperor Akbar, about 10 kilometers from Agra city center. Considered as the greatest Mughal emperor, he was the most secular minded royalty and a patron of the arts, literature, philosophy and science. Akbar himself laid out the plans for his own tomb, selected an appropriate site and even started building it. His son Emperor Jahangir finished building the tomb in 1613. 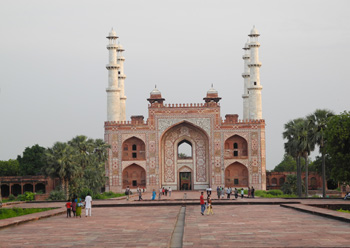 The hallmark of Mughal architecture in India is in the use of red sandstone and marble. We entered the mausoleum complex through a red sandstone gateway, with four minarets in each corner, immediately bringing to mind the Taj Mahal. There are four gateways into the complex but only one is in use now. A broad, paved plaza like walkway leads to the tomb. Magnificent in its look, the tomb is a five story red sandstone building, carved with glazed tiles and colorful stones. The eye catching mosaic patterns that cover the gateway and the tomb entrance embody the essence of Mughal design showcasing elaborate stone inlay work, calligraphy, tile work, painted stucco and white marble.

The tomb is situated in the midst of a four square garden, also called char-bagh, the epitome of Mughal style. The beauty of the complex took our minds away from the searing heat as we marveled at the intricate patterns and made our way to the crypt to see Akbar’s final resting place. Once back outside, the sun was setting and brought in a breeze, cooling us down. We walked around the plaza stopping by to watch a flock of deer and peacocks in the garden. And then it was time to travel onwards to Agra. Our driver suggested that we visit Taj at sunrise in order to avoid the heat. 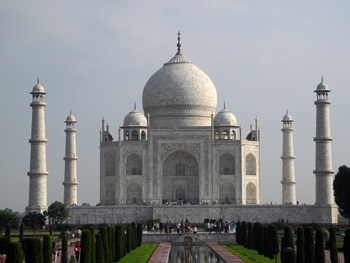 At around 7 am next morning, we reached the Taj Mahal. In the early morning quiet, we had an easy time of buying tickets and then we headed towards the main entrance gateway to the Taj. I could feel the palpable excitement in the air as we waited to get in. One first views the Taj through the dark entrance way and I remembered my first visit all those years ago. The Taj is one monument I feel that exceeds the expectations of the viewer no matter how many times they have seen it.

Here’s a little bit more background about the Taj Mahal. It was built by Emperor Shah Jahan as a symbol of love for his third wife Mumtaz Mahal who died in childbirth in 1631 while giving birth to their 14th child. Shah Jahan was the most prolific builder amongst all the Mughal emperors. He is credited with the construction of the Red Fort and Jama Masjid in New Delhi, the Moti Masjid (Pearl mosque), Sheesh Mahal and Naulakha Pavilion in Lahore Fort in Pakistan. But his crowning achievement is definitely the Taj Mahal. 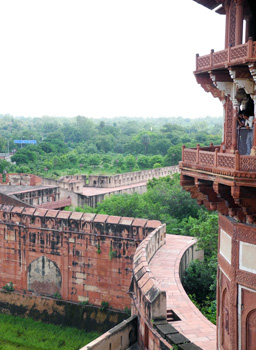 The tomb complex stands on the southern banks of the River Yamuna and took twenty years to be completed. It is made of white marble inlaid with semi-precious stones that form intricate designs using the pietra dura technique. There are verses from the Quran, inscribed in calligraphy on various sections of the complex including its arched entrances. Like at Sikandra, the Taj too is situated in a four square Mughal paradise garden, on its northernmost end and on a raised marble platform. The four decorative minarets on each corner lean away slightly so that in the event of an earthquake they do not fall on the main structure. Both Shah Jahan and Mumtaz Mahal are interred here and we see their highly decorated marble cenotaphs directly below the main dome. Both these are false tombs and the real tombs are underground and cannot be viewed by the public.

It was now about nine am, and the Taj was shining, jewel like in the strong morning sun. The place was slowly filling up with visitors from all over the world. About three million people visit the Taj during the peak tourist season, making it one of the most visited historic sites in the world. It is also a UNESCO World Heritage Site, designated so in 1983. We spent some more time admiring the splendid reflection of the Taj in the mirror like water pools that divide the garden into four squares. 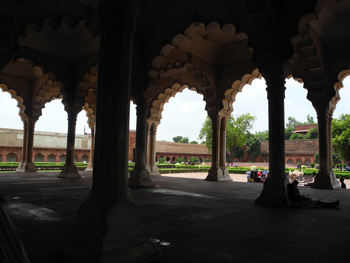 Soon it was time to leave and move on to the next historic site on our itinerary, the Agra Fort, also known as the Red Fort of Agra. Emperor Akbar began building this massive red sandstone fort in 1565 and it was completed with further additions by Emperors Jahangir and Shah Jahan. Predominantly built as a military structure, Shah Jahan constructed several white marble palaces within the premises. It too is a UNESCO World Heritage Site designated so in the same year as the Taj.

Although the iconic Taj will always stay in prime focus, the Agra Fort is impressive of its own accord. It is a walled city, covering about 94 acres, with massive walls and four gigantic gates. Today we enter the fort through the South Gate or the Amar Singh Gate. We then pass through two more massive gates built by Akbar before reaching the fort proper. My first introduction to the Agra Fort was when I saw the 2007 Bollywood movie “Jodha – Akbar”, an epic love story that chronicled the romance of Emperor Akbar and his Hindu Rajput wife Jodha, the mother of Emperor Jahangir. 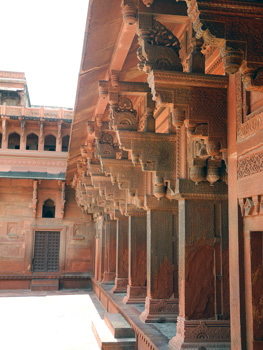 We walked around the fort in the blinding August midday heat, strangely unperturbed, feeling ourselves being transported to the Mughal glory days. We strolled through marble pavilions and red sandstone hallways, stopping to admire the elaborate and intricate carvings. The Agra Fort is a superb example of Indo-Muslim architecture with Persian influences. This is seen in the floral and geometric designs that cover the walls, the archways, and in the intricate jali (perforated stone and latticed screens) patterns and the balconies that overlook the Yamuna River and the Taj Mahal. In the final years of his life, Shah Jahan and his daughter Jahanara Begum were imprisoned here in the tower known as Musamman Burj by his son Emperor Aurangzeb when he came to power in 1658. It is said that he spent his last days looking out at the mausoleum of his beloved Mumtaz Mahal.

No matter the season, Agra is truly a wonderful place to visit to soak in the art and culture of India’s Mughal past. 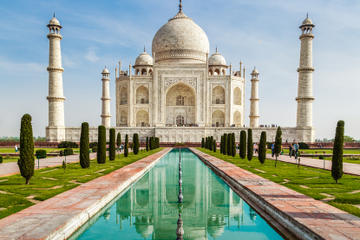 ♦ Location: The city of Agra is located 204 km south of Delhi, the capital of India.

♦ The Agra Airport, barely 5 km from the city is linked to major cities across India by all the major domestic airlines. Agra is also well connected by railway. The luxury train, Palace on Wheels, and the super express trains, Rajdhani Express and Shatabdi Express, all stop here. The two main railway stations are Agra Fort Railway Station and Agra Cantonment Railway Station. The city is also very well connected by road to all major nearby destinations by government as well as private buses, taxis and cabs.

♦ The best time to visit Agra is from the months of March to October. Although the tourist areas are fine to visit anytime, winters are chilly and summers are scorching hot.

Photos 2-8 by Susmita Sengupta:
Early morning view of Taj Mahal above the cityscape
Sikandra, tomb of Akbar
Gateway to Sikandra
The Taj Mahal
East ramparts of the Agra Fort
Arched pavilion of Diwan-e-Aam (hall of public audience)
Intricate carvings in red sandstone at the fort