Driving north from Palma on the MA13, towards the Castello d’Alaro, the Tramantuna mountain range instantly alters any preconceptions tourists have of this island of Mallorca. The surrounding rural countryside is frequented, for the most part, only by intrepid cyclists practicing for La Tour and those who have discovered that venturing beyond the South-Western corner of tourist excess, dominated by the urban sprawl of Palma and the package holiday resorts of Magaluf and Palmanova, yields a treasure trove of history and culture. Precipitous mountains loom ahead, forming a limestone spine along the North-West axis of the island, and the craggy peaks hint at the turrets and crenellations which defended these mountaintop strongholds for centuries.

Picturesque villages, like Alaro itself with its charming placa, have early morning markets and bakeries where eager elderly ladies queue and gossip ferociously as they buy their daily bread; with a glance of interest and a hint of mistrust directed at any, presumably lost, tourist buying a a parra. Places like Alaro are, clearly, not a standard port of call for the twenty-somethings who frequent Mallorca. For those that make the journey however, from the central crossroads in the town, a pink sign, used on the island to point to cultural sites, directs to the magnificent, hidden, alluring Castello d’Alaro. 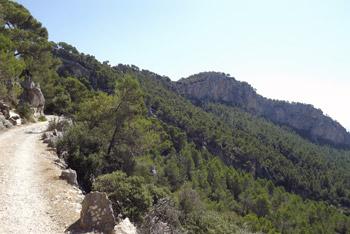 Seeming to grow out of the craggy mountaintop, the castle has panoramic views of the Bay of Palma, the mountain range and much of the flat Mallorcan hinterland. Starting at the foot of the mountain the walk, which takes you past an agrotourismo hotel, takes around two hours. If you have faith in your driving reflexes and you have a hire car with a relatively good ground clearance you can continue to drive, shortening the walk to about forty-five minutes, and park amongst the goats at the smallholding adjacent to the Es Verger restaurant. Inside, the family are inevitably sat having one meal or another, while the wooden furniture, assorted mismatched objects around the walls (and the local matriarch) emit a faint smoky smell; a mixture of tobacco and the winter fires fuelled by the tonnes of wood piled up around the courtyard all year round. The jangling bells of the goats, which starts echoing down here and follows you all the way up to the castle, are enchanting and, were it not for the refrigerator of cola in the restaurant, you could be in a long-forgotten world of knights, serfs and Saracens. 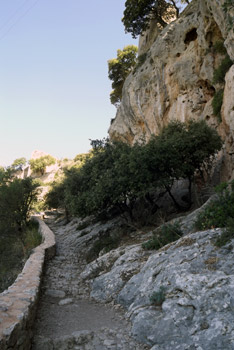 From this point, again, you can continue the drive but it’s not advisable. The few vehicles that do brave the stony track are usually taking supplies up to the hostel and ‘bar’ which is located within the 17th century church complex in the castle. Even these must stop at a final way-station where the last few hundred metres up the ancient steps are made with the help of donkeys, who you may see tethered in the shade along the flat ridge beneath the castle. Up here, in the still, warm air, with the craggy parapets looming down like an old eagle waiting to pounce from its precipitous eyrie, it’s easy to understand how this castle was a key defensive centre for both the pre-Islamic inhabitants of Mallorca and the subsequent Muslim and Christian rulers.

The name Alaro comes from the Arabic ‘al-Rum’ meaning Romans or, more accurately, Christians. The Romans themselves came to the island in the 2nd century BC when the naval commander Caecillus Metellus was sent against the pirates who inhabited the Balearics. He founded the two most significant towns of the classical period, Palma and Pollentia (the latter’s ruins, not to be confused with the modern Pollenca, can be visited near to Alcudia on the east coast), with three thousand of his Italian and Spanish veterans who, we can assume, were intended to keep the irascible Mallorcan pirates at bay. The actual threat of these pirates however is questionable. Some sources suggest they were perhaps merely slingers on rafts, while, according to the Roman geographer Strabo, the Greeks knew the islanders as gymnasios or, nudists, perhaps giving an insight into the longevity of Mallorca’s vulgar reputation… Either way, Metellus was rewarded with a triumph for his exploits and assumed the, not altogether modest, name Balearicus – conqueror of the Balearics. Evidence for Roman activity in the island is, though, relatively sparse and the settlements were very much the far-flung outposts of the empire.

When the barbarians laid waste to the Roman Empire, Mallorca was conquered by the Vandals in 534 AD, before the island was taken under the control of the Byzantine, Empire. It was in this period that the first significant defensive walls were built around Palma. For around three hundred years the island would remain, ostensibly, Christian until in the 8th century, a new power from even further East than Byzantium came crashing into the Mediterranean.

The Balearic Islands came under the dominion of Islam perhaps as early as 707-8 AD but, as the Muslim world fragmented with civil wars, which saw the Abbasids emerge triumphant, the now independent Umayyad Emirate of al-Andalus, today’s Spain and Portugal, was forced to wage a series of wars in the Western Mediterranean to solidify its authority. It is from this period that we have the earliest historical mention of the Castell d’Alaro.

In 902 AD Hisham al-Hawlani launched a campaign against the islanders which was chronicled in the Geography of al-Zuhri. He stated that the fortress was inhabited by Rumi – Romans/Christians – and that it served as a refuge to some 15,000 people, holding out for nearly nine years in the face of Hisham’s onslaught. The resistance of the Christians resulted in the castle being named al-Rumi from then on.

Cracks were beginning to develop in al-Andalus, however, and the Andalusis had to contend with the combined threat of the increasingly strong Christians in the North and the aggressively fundamentalist Berbers in North Africa. In 1114 the Catalans and Pisans launched a campaign against Moorish ‘pirates’ on Mallorca while, in 1116 and 1203, the island was conquered by Berber sectarians; first the Almoravids then by the Almohads who invaded from the Maghreb.

Few Islamic period remains can be seen in Mallorca today but it is worth seeking them out as they reflect the cultural effervescence of Andalusi rule. In Palma itself, for example, there are the gardens within the Banys Arabes – Arab Bath-house – one of only examples of Islamic architecture in the city. Located down the Carrer de Serra just north of the Parc de Mar, they still offer retreat from the hustle and bustle of Palma’s markets and thronging streets. The trees and flowers suffuse with the warm sea air and create an intoxicating, semi tropical aroma and, as you walk under the carefully tamed archways of shrubs, small lizards dash overhead, seeking out the insects gorging themselves on the pungent nectar. The remains of the bath house itself are fascinating and it is easy to imagine a Sheikh or Wali taking his ease in the cool shade.

Islamic rule in the Balearics would not last long after the Almohad period and the Christian Reconquista began to gather pace in the 13th century. In 1229, the Catalonian/Aragonese ruler, Jaime I launched a campaign against Mallorca. He landed at San Telmo before routing the Moors at Santa Ponsa. He later recounted that in the aftermath of his siege of Madina Mayurqa (Palma) three thousand men and fifteen thousand women and children sought refuge in the Castello d’Alaro. Again, the castle’s dominant position and strategic importance saw the defenders hold out far longer than expected, until late on in 1231. 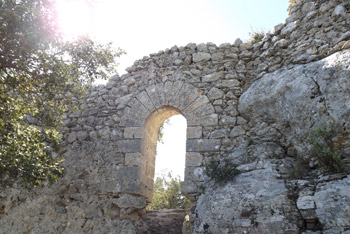 The remaining walls around the castle are still an impressive sight and as you meander up the steps, cut out of the cliff to serve the pilgrims who would later trek to the church in the 17th century, you can feel the history coursing through the stones. Unlike many of the other castles in Mallorca there has been relatively little done to ‘restore’ the walls and what modern work there is tends to be associated with the church buildings which now house the hostel and bar.

Once at the top, passing under the stone gatehouse, turn right and you climb through the trees and across the rough limestone to the church site where there is a telescope looking out over the cliff, back down towards Es Verger and the Bay of Palma. If, however, you turn left, leaving the path taken by the hikers in search of refreshment, you can explore the remains of the castle in relative solitude. 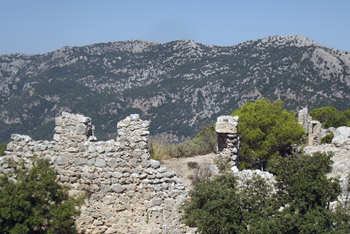 At the side of the mountaintop opposite to the gatehouse there is a completely sheer drop down to the farms in the valley below where birds swoop in out of their nests in the cliff’s crevices. Apart from them, and the deafening cicadas, it is completely still and you can almost imagine a scene from El Cid playing out on the plains far below. There are few views on the island to rival this and the ruin, unadulterated by heavy handed restorers, has maintained an allure that is unrivalled by the busier historical sites like Palma’s Almudaina and Capdepera. Just as the Banys Arabes offer a retreat from the clamour of modern Palma, Alaro transports you back in time to the age of chivalry, crusades and Andalusi enlightenment.

Thousands of years of Mediterranean history are bound up in this island which has seen empires rise to claim mastery over places like Alaro and crumble back into the sea far below, to be replaced by the strong and the modern. Their legacy is still accessible however, despite the latest conquest by the Easyjet generation. All you need is a good pair of walking sandals, a half-decent map and a pinch adventurous spirit. 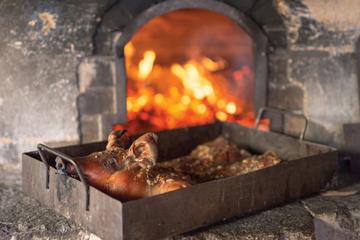 Mallorca is the largest island in the Balearic archipelago, located in the Mediterranean off the south east coast of Spain. It takes about two hours to fly from most UK air ports and is one hour ahead of GMT. There are many budget hotels in the south west resort towns. Native islanders speak a Spanish dialect related to Catalan.

Hotels mainly cater to the package holiday traveller but there are boutique and designer hotels in Palma. Further afield, in the interior the mountains and the north and east coast, there are agrotourismos, which are converted farm houses, self-catering apartments and traditional fincas. Hiring a car is definitely the best way to get around. The bus service is good in the south west and there are trains across the interior and north from Palma to Soller, but to seek out the hidden treasures found in the mountains a car is necessary. Rates are good if you book in advance and the smaller towns, especially in the south west, have independent rental services which often have bargains or negotiable day rates. 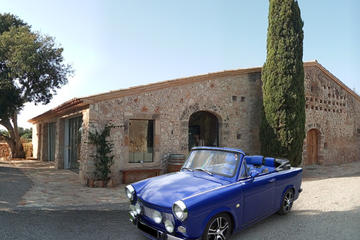 About the author:
Tal studied history and classical civilisation at Roehampton University, London, graduating with 1st before winning an Arts and Humanities Research Council scholarship to study for an MA in Middle Eastern History at SOAS. He graduated with a Distinction in 2014, with a focus on Islam, the history of religion and the Ottoman Empire. Tal is now a junior account executive at international communications consultancy Infinite Spada.