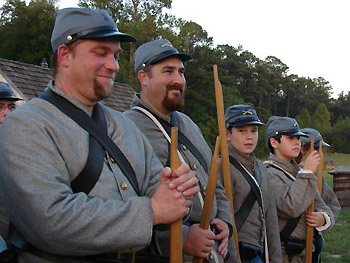 My husband John and I signed up for the Civil War Adventure Camp, part of the Pamplin Historical Park. I volunteered for the Army of the Potomac and John joined the Army of the Confederacy. Regardless of the visions of glory when enlisting, this quickly faded with the intensity of the training and experiencing the horror of war, albeit a ‘mock’ war. 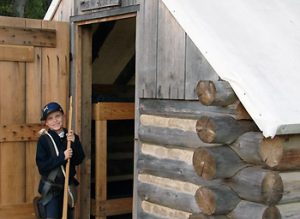 Dressed in my blue Union uniform, I stood next to John in his Confederate gray and we were sworn is as privates. We were each issued a haversack, canteen, cartridge case, and cap case.

“Platoon Assemble,” barked the First Sergeant. “A sorry looking bunch of fresh fish if ‘er I saw one. Here is how you wear your uniform and equipment.”

We quickly learned the correct reply was, “Yes, Sir!”

Then he taught us the proper way to salute: “Palm out!”

Once we were somewhat presentable he instructed us in commands: “Form columns of companies!” “Count off!” “Dress right!” “Right face!” “Right Flank! March! One, Two!”

We managed to get into some kind of order and marched to our encampment where we were issued blankets and assigned our quarters. Fortunately, we didn’t have to build our houses and dig trenches like the real Civil War soldiers did.

The log and canvas quarters were surprisingly comfy after the drilling and marching: two bunk beds with foam mattresses and a little Franklin stove, which we would not need given the unseasonably warm weather. Before we had time to enjoy our accommodation we heard the familiar command: “Platoon assemble!”

Back in line we were issued wooden muskets to practice with. We learned the proper way to handle them in a variety of situations: at ease, for inspection, marching, and climbing over fences. First Sergeant Young taught us to “load in nine.” During the Civil War most of the southern soldiers were familiar with muskets and rifles but not the northern soldiers. Following the commands we positioned our musket at an angle by our left heel, took out a cartridge and tore off the paper with our teeth.

“All infantrymen must have at least four teeth, preferably two on the bottom and two on the top,” said the Sergeant. “Spit that paper out, you don’t want to swallow it. I want to hear everyone spit!”

“You are all right handed here,” the Sergeant said.

I reached into the pouch and put a cap on the cone of the weapon. Using my right thumb, I cocked the weapon, and aimed waiting for the order to fire. We drilled and drilled some more. It was hot, but we were lucky it wasn’t raining. Off we marched to the firing range where we actually got to fire a real black powder musket and a mortar. 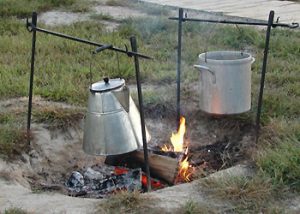 In the evening, after a hearty dinner of beef stew, hard tack, shrub (fruit drink) and some fruit donated by a local farmer, we took turns on patrol, some standing watch, others waiting their turn. Soldiers not on guard duty played card and dice games. Someone commented: “If’n I happen to buy the farm promise you’ll get rid of the cards and dice in my haversack. I don’t want my momma to know I was gambling.”

The full moon offered a bit of light. The only sound was an owl in the nearby woods. It is said that Stonewall Jackson had a soldier shot for falling asleep on guard duty. That was enough to keep everyone alert.

After such a strenuous day, no one had to be told twice what taps meant. Hitting the sack was a wonderful respite.

The tattoo sounded at 5:45 in the morning. Slowly, I crawled out of bed and rolled up my sleeping bag. I didn’t have time to go up the hill to the “sink” – military euphemism for toilet – before assembly. 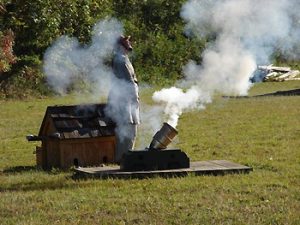 After assembly, we lined up to get our field rations: hardtack, dried fruit, corn muffin, and beef jerky, and filled our canteens. Then we marched off to battle. We Union soldiers took up our position in a field trying to be as inconspicuous as possible in the grass. We were trying to break through General Robert E. Lee’s line near Petersburg.

Tension built. Then through the trees someone thought they saw a movement.

Using the buddy system we took turns firing and loading. 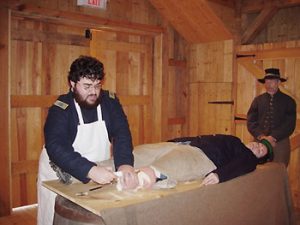 After a few intense minutes the skirmish was over. We assembled, and marched back to camp. Some of the “wounded” were treated in the field. Most of the injuries were minor, but one unlucky soldier was brought to the surgery where he had to have his leg “amputated.” The doctor explained the process to us in graphic detail.

Just when it seemed that we were getting with the program it was time to muster out. We assembled, received our “pay” and “walking papers” and were discharged.

The Civil War Adventure Camp is part of the Pamplin Historical Park. Their Civil War Battle video, “A War so Terrible” graphically depicts the realities of combat. At the museum we picked the name of an actual Civil War soldier and followed him through seven galleries with interactive displays.
Pamplin Historic Park also includes Tudor Hall Plantation, trails, and a military encampment.
The campaign of Petersburg lasted 292 days in 1864 and 1865. Known as “The Breakthrough,” the Union victory led to General Robert E. Lee’s surrender to General Ulysses S. Grant at Appomattox Court House which ended the Civil War.
The Civil War Camp Experience is a “real life” experience. Our group was a mix of all ages, mostly male but with a few females that were mainly part of family groups.

About the author:
Contributor’s Bio: Sandra Scott is a retired history teacher and the co-author of two local history books. Scott has been traveling worldwide and writing about her travels since 1990. Her retired husband, John, is her traveling/writing partner. Their travels have taken them to over 100 countries, some several times. Along with several columns, their work has appeared in a variety of publications worldwide. Website: www.sanscott.com