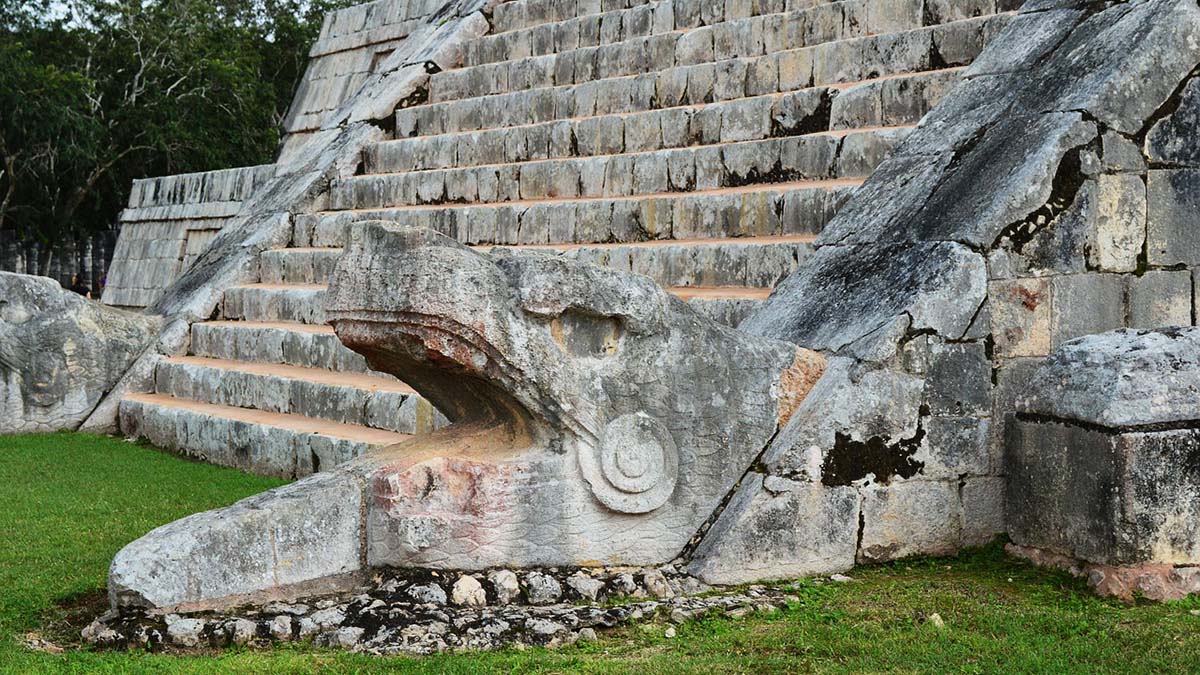 Maya ruins are each unique in their own way. Chichen Itza, Coba and Tulum are no different. Chichen Itza has two cultures; Tulum is a walled city and Coba is 95% unexcavated. I have visited each of these ruins, and found it very humbling to walk in the footsteps of the ancient Maya. 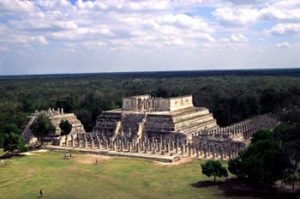 Chichen Itza (meaning mouth of the well of the Itza tribe) spans two distinct periods of time. The first one, Old Chichen, spanned from 324 to 975 A.D. During the Early Classic period of this time, from 324 to 625 A.D., external influences from other cultures disappeared and the typical Mayan traits developed.

During the Flowering Period, from 625 to 800 A.D., architecture, sculpture, mathematics, astronomy and hieroglyph writing flourished. Chichen Itza was at the height of its culture during these years.

Next, came the Decline, from 800 to 975 A.D., when the Mayan culture started to disintegrate eventually reaching a level culturally almost equal to where it was right before the Early Classic period began. It was also during this period when the Maya abandoned their cities and ceremonial centers for reasons still not fully known.

Its importance comes from the fact it holds the only hieroglyphic date yet found in Old Chichen. Carved in classic Maya data on a lintel, the date translates to 879 A.D. 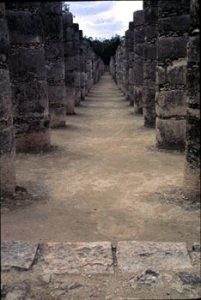 The second period, new Chichen, began about 975 A.D. when the Toltecs arrived and merged the two cultures. Usually when one culture collides with another, the weaker culture is suppressed (and usually wiped out) while the dominant culture prospers. Somehow the Toltecs and Maya were able to merge both cultures and satisfy the beliefs of both groups. This alliance lasted until 1200 A.D. when it began to decline.

Once inside New Chichen, Chac is still visible, but the Toltec Sun God, the Feathered Serpent Quetzalcoatl, is superior – evidence the two cultures merged. The most impressive of the monuments in New Chichen is the Castle or the Pyramid of Kukulcan.

Kukulcan, Maya for the Toltec Sun God, is classic Toltec. The castle measures 24 meters (78 feet) high with a 55 meter (180 feet) square base. Its nine recessed stories represent the nine planes of the underworld. On each side of the pyramid is a 91-step staircase. The steps from the four sides, plus the small temple on the top, equals 365.

If you are there at 3 pm on either March 20 or September 21 (the equinoxes), you would see the sun forming a series of seven triangles of light and shadows on the ramp of the north staircase of this temple creating the impression of an undulating serpent.

At the bottom of that staircase two carved serpent heads greet me. Worshiping snakes was part of the Toltec culture brought to the Maya and is not found in Old Chichen structures.

Two other New Chichen impressive structures are the Temple of Warriors (also known as the Temple of a Thousand Columns) and the Ball Court. The Temple of Warriors is a magnificent structure having a base measuring forty meters (131 feet) along each side and twelve meters (39 feet) high. Its tiers, with sloping walls, are topped with a carved cornice depicting jaguars and eagles devouring human hearts. It is well documented the Mayans used human sacrifice in their religious ceremonies. Also, this temple has a staircase with carvings of serpents running along each of its sides. At the top of the temple is a carving of Chac guarding the entrance, showing the Old Chichen influence in the New Chichen era. It is even more impressive seen from standing on the top of the pyramid. Use the rope handrail both going up and down the pyramid staircase.

The Ball Court is typical Mesoamerican architecture measuring 168 meters (549 feet) long and 70 meters (229 feet) wide making it one of the largest in the Mayan world. The playing field is bordered on the east and west by vertical walls each with a stone ring. The top of the two walls are flat and more than likely used as seating for spectators. The north and south ends of the field each have a rectangular temple where royalty sat. To win, the captain of a team had to put the ball through one of the stone rings. His prize was losing his head and in doing so believed it provided him with a direct ticket into heaven instead of having to negotiate the 13 steps other Mayans had to endure after death to get to heaven. 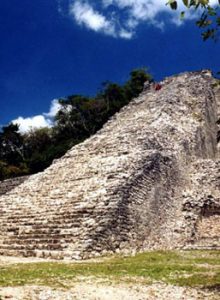 Cobá, (Mayan for “water stirred by the wind”) lays situated around two main lakes which is an oddity in the Yucatan. Occupied between 632 and 900 A.D., scientists estimate between 40,000 to 50,000 people lived here. Then, for some still unknown reason, just like Chichen Itza, it was abandoned.

The uniqueness of Cobá lays in its mystique. Being about 95% of the 44 square mile site remains unexcavated today, it is easy to fantasize what still remains undiscovered as one looks around. Scientists believe Cobá has about 6,500 structures. The main excavated part of this site is the El Castillo pyramid of the Nohoch Mul Group. Standing at 42 meters (136 feet) high, the seven-level El Castillo is the tallest pyramid in the Yucatan. Once atop El Castillo, I see in the distant the shimmering Lakes Macanxoc on the left and Cobá on the right. As I look out across the jungle canopy, I can see the white Temple of the Church pyramid pushing its way up through the green trees.

The Temple of the Church or La Iglesia is a nine-level rounded corner pyramid 25 meters (80 feet) high and part of the Grupo de Cobá or Cobá Cluster. Another structure found in the Cobá Cluster is the ball court.

Cobá is also known for its sacbeob. These roads or causeways, 78 kilometers (120 miles) of them in all, were made by the Mayans by piling stones one to two meters high, then covering them with a mortar coating. Forty of these roads radiate out from Cobá in all directions linking it with other ancient Mayan cities some as far away as 37 kilometers (60 miles).

Evidence points to Cobá being a great trading center linking port cities, such as Tulum with cities in the interior, such as Chichen Itza. 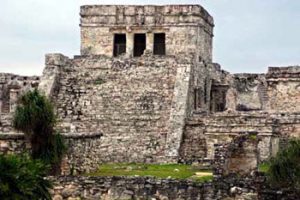 Tulum (Mayan for trench or wall) flourished from the 1200s to the late 1500s A.D. and was still inhabited when the Spanish arrived. It was an important trading post for the Post Classic Mayans. During this period, the Maya started using large 11-15 meter (40-50 feet) seagoing canoes hewn from local hardwoods.

Canoes revolutionized trading in this part of the Maya world because other Maya cities moved their goods by carrying them which limited how far they could range. With the advent of canoes, Tulum’s trading voyages ranged from the Gulf of Mexico, the coast of the Yucatán peninsula and extended to what is today Honduras, Costa Rica and Panama.

Apart from its coastal setting, Tulum is unique because of the wall surrounding it on three sides. The wall averages seven meters (23 feet) thick and three to five meters (10-16 feet) high. With the ocean on the forth side, I can see how Tulum was easily defendable.

There are about 60 well preserved buildings on the site of Tulum. One of my favorites is the Temple of the Frescoes. On the interior, frescoes are still visible depicting typical Mayan motifs. On the outside, carvings cover this interesting temple. One image seen on this building, and throughout Tulum, is the diving god. 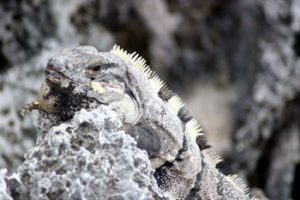 The Temple of the Frescoes is built in three levels, symbolizing the three realms of the Maya universe – the dark underworld of the dead, the middle level of the living and finally heaven, where the gods lived.

The most impressive building of Tulum is the castle, El Castillo, perched on Tulum’s highest cliff overlooking the sea. This temple-topped pyramid also served as a watchtower and a lighthouse. Legend has it there were two torches on top of the temple. When lined up one behind each other, it provided a safe path through the reef to shore.

If you are a Maya ruin aficionado, these three sites will provide an enjoyable two-day diversion from the normal beach routine. As I walked through each of these ruins, it was humbling for me to realize I was walking in the footsteps of the ancient Maya. 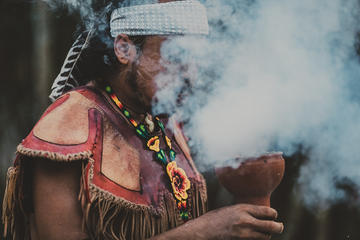 From Playa del Carmen, go north on Federal Highway 307. In about 20 minutes, you’ll pass through Puerto Morelos, where you should fill up with gas. You won’t pass another gas station for almost 200 kilometers and from Playa to Chichén Itzá, it’s about 280 kilometers. Keep going towards Cancun for about another 20 minutes and you will see the exit to Mérida. Turn left on Federal Highway 180D towards Mérida. You’re now on the cuota highway, which is a toll road. After 90 kilometers you get to the border between the states of Quintana Roo and Yucatán, where there’s a toll booth, restrooms and a kiosk. The toll for a car is 145 pesos or about 14 USD. After passing the border, keep going for another 105 kilometers. About halfway there’s a gas station. By the next toll booth, turn left onto Highway 13 and follow signs to Chichén Itzá/Pisté. The toll here is 40 pesos or about US$4. After about 10 minutes you get to Pisté. Once in Pisté, turn left at the sign to reach the ruin. After the turn, it’s only a few minutes to the ruin; keep right in the Y-crossing and you’re there! Parking is 10 pesos or about US$1.00. Entrance fee is 80 pesos (US$8.50). The ruins open at 7 am and closes at 6pm. It is open 7 days a week, 365 days a year.

From Playa del Carmen, go south on Federal Highway 307 for 60 kilometers. This will take you about 50 minutes to drive. Turn left at the stoplight on Boca Paila Road. At the tee in the road, turn left to get to the Tulum Archeological site. Entrance fee is 35-40 pesos ($3.50 – $4.00 USD). Kids under 13 get in for free. There’s an additional charge of 30 pesos ($3.00 USD) if you want to use a video camera. The ruins are open 8am – 5pm every day. There are plenty of guides offering their services for a fee.

From Playa del Carmen, it is the same as going to Tulum. However, instead of turning left at the stoplight , turn right on Boca Paila Road. There’s a sign to Coba. Once you get to the village of Coba, follow the paved road through the town and you’re there. Coba is about 30 minutes from Tulum. The site opens at 7am every day, 365 days a year and closes at 6pm. There’s parking right by the entrance for 10 pesos. The entrance fee is 38 pesos ($3). Children under 13 enter free.

About the author:
Ron Kness is a travel writer/photographer with articles and photos published in various house publications, in-flight magazines and other media sources. Ron is keenly interested in ancient Mayan history of Mexico.

Photo credits:
First Chichen Itza image by edtribo from Pixabay
All other photos are by Ron Kness.