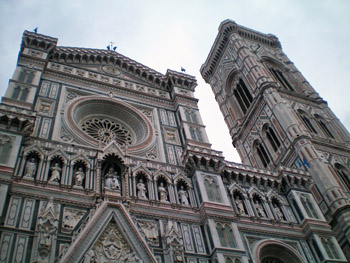 Dante began The Divine Comedy in 1308, while exiled from his beloved Florence. The pain of this banishment surfaces in his writing: You shall leave everything you love most, this is the arrow the bow of exile shoots first. (Paradiso, XVII). Dante never returned to his native city; even the tomb built for him in 1829 in Sante Croce remains empty. Yet were Dante to return to Florence today, much of the city would be familiar to him.

The Baptistery San Giovanni and Duomo 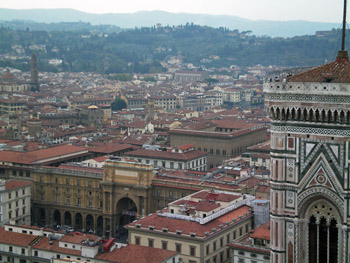 Recognizable to any medieval citizen, the Baptistery and Duomo remain the heart of Florence. Dante’s ‘bel San Giovanni’ is one of the city’s oldest and most famous buildings. Medieval houses still line the Piazza Duomo, many still proudly displaying a stone coat of arms. Like many Florentines of the time, Dante was baptized in the large octagonal font of the Basilica. The building itself dates back to the 4th century. The 13th century mosaics covering the ceiling show with graphic detail the horrors and glories of the Last Judgment. Dante never saw Ghiberti’s famed doors, for they would not grace the building for another century.

Construction of the Duomo began in 1296, before Dante’s exile in 1301. In the basement lie the excavations of the Paleochristian cathedral Santa Reperata, founded in the 6th or 7th century AD on the remains of a Roman palace. On the southern side, just before the Via dello Studio, is a stone plaque marking where the poet would sit and contemplate the construction of the cathedral. 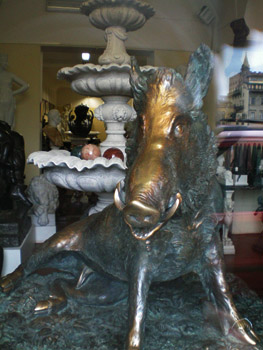 For the hardy, 463 steps lead from the floor of the Duomo and up through a labyrinth of corridors and stairwells to the top of the cupola. (The most difficult part of the climb is over the arch; there is a spot here for lovers to place a padlock and throw away the key. In hidden corners remain marks left on the brickwork by the medieval builders.) The cupola soars to the height of the neighbouring hills. The view embraces the history of Florence, with many a medieval street following the course of their Roman precursors. Private palaces survive, and a few towers – or torre, outlawed in 1250 – still remain.

The Via de Calzaiuoli was the thoroughfare of the medieval city. Linking the Duomo to the Palazzo Vecchio, it runs past the all-important Guildhall of Orsanmichel. Once a grain hall, in Dante’s time the Orsanmichel reflected the power wielded by the greater guilds. The statues in the niches on the outside walls were commissioned by each guild. These include the Medici e Speciali, the guild of physicians, apothecaries and painters, to which Dante belonged. (Without guild membership, a Florentine could not participate in the city’s parlamentos.)

A slight detour leads to the Mercato Nuovo, popular since the 11th century. Locally it is known as il Porcellino after the bronze boar with a well-polished nose who takes pride of place at the entrance.

Heading west from the Mercato Nuovo leads to the Via delle Terms. Named after the Roman Baths once in the area, it remains an attractive medieval street. At its beginning stands the Casa Torre Buondelmonte. No. 9 is a medieval palace with a renaissance courtyard, while another torre remains at no. 13. The road opens into the Piazza Santa Trinita, with its tall Roman column taken from the Baths of Caracalla. A church has existed on this site since 1077.

Leading from the piazza and running parallel to the Arno is the Borgo Santi Apostoli. Like many Florentine streets it is originally Roman. In the Piazza del Limbo stands Santi Apostoli, which, like the Baptistry, is one of the oldest surviving churches in the city. A plaque claims it was founded by Charlemagne in 786. The age of the building can be seen in that it lies considerably lower than the road.

Beyond the Ponte Vecchio, the Via dei Neri bends as it follows the shape of the old Roman port. A small road branches off to the 11th century church San Remigio; tablets along the length of the road mark the height of both the 1333 and 1966 floods. The Via Dei Neri leads to the Palazzo dei Priori, renamed the Palazzo Vecchio in 1299. 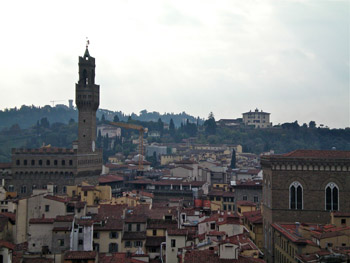 Dominating the Palazzo Vecchio, the Piazza della Signora has continued as the centre of political activity since the Middle Ages. Heavy traffic has been banned since 1385. The imposing façade of the Palazzo Vecchio has remained virtually unchanged since it was built (1299 – 1302) – Dante writes of how the houses of the Ghibelline Uberti were demolished after the triumph of the Guelfs, and the new Palazzo built on their ruins. (The Piazza della Signora is itself built over Roman ruins.)

The Palazzo Vecchio still functions as the town hall. Its bell tower, once the tallest edifice in the city, summoned the (male) population to the parlomento in the square below in times of trouble. Savavarola was imprisoned in the Palazzo before being burnt at the stake in the Piazza della Signora. It was here, in 1530, the people of Florence proclaimed the return of the Medici from their own exile.

It is this area of Florence most associated with Dante. The Via dei Maggazini leads from the Piazza della Signora to the Via Dante Alighieri. In a restored 13th century tower house is the Casa di Dante, a museum dedicated to the poet’s life and works. A plaque in the small piazza lists the monuments existing in Dante’s time. 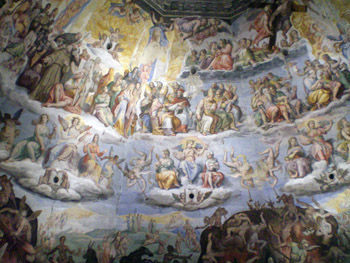 Walking beneath the arch into the Via Santa Margherita leads past the 12th century Santa Margherita de’ Cerchi, where the poet married Gemma Donati (they were betrothed when Dante was nine). It is also where he first saw Beatrice Portinari, the woman he immortalized in his writing. Beatrice’s father, Folco Portinari, is buried here.

A few streets away is the Badia Florentina, whose bell, as mentioned in Paradiso (XV 97-98) regulated medieval life. Boccaccio used the Badia in 1373 to give public lectures on Dante’s works. Opposite is the Bargello, the oldest seat of government surviving in Florence. It was here that Dante’s banishment was proclaimed.

An archway leads from the piazza to the Via Proconsolo, where Beatrice lived. This street in turn opens onto the Corso, another Roman road, which leads to the site of the eastern gate of the Roman city; ‘Florentina’ was founded in 59 BC as a gift from Julius Caesar to his veterans. 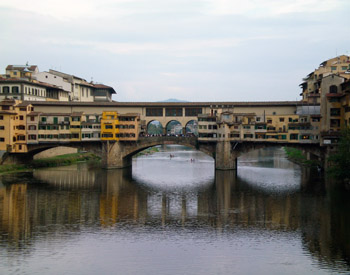 Standing near the site of the original Roman crossing of the Arno, this was the city’s only bridge until 1218. In Dante’s time the Ponte Vecchio was home to butchers and grocers; since the 16th C it had been the place to shop Florence’s most spectacular jewellery.

Until the Grand Dukes move here in 1550, The Oltrarno, was literally ‘other side of the Arno’, where those who could not afford a grand palazzo within the city center lived. Today, it remains relatively quiet compared with the bustle of the city.

A walk of a few minutes from the Ponte Vecchio leads to Santa Felicita. A church has existed on this site since the 4th C. In the 2nd century AD some Syrian-Greek merchants settled along a busy consular road here, bringing Christianity to the city. Inside are some masterpieces of 16th century Florentine painting. The Vasari corridor runs through the nave, which enabled the Medici to attend Mass unseen by the great unwashed. 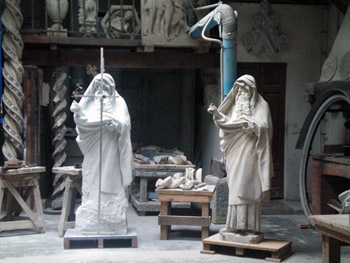 On the left of the church runs the Costa di San Giorgio; Galileo once lived at No 9. At the end of the road stands the Porta San Giorgio, the oldest of the surviving city gates (Florence was still a wall city in Dante’s time.) A steep walk away is perhaps the most unspoilt of all the Romanesque churches in Tuscany: San Miniato al Monte. It’s classical façade of green-grey and white marble has looked down over Florence since 1018.

The quiet streets of the Oltrarno are filled with artisan workshops and medieval buildings. Wandering them at leisure, perhaps with a gelato in hand, gives an insight into Florence in the time of Dante. Perhaps even better, why not imitate the locals and choose a place to enjoy a coffee with some schiacciata alla fiorentina, or maybe a glass of prosecco and some crostini, and sit and watch the world go by? 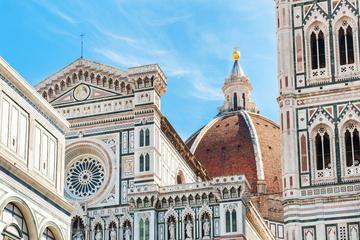 ♦ For a unique experience, consider a convent or monastery stay.
♦ www.fmmfirenze.it – Casa Santo Nome di Gesu: a 15th century palace in the Piazza del Carmine, now a Dominican convent
♦ www.sanctuarybbfirenze.com – Sanctuary B&B Firenze: an oasis a few streets away from the Duomo
♦ english.firenze.net – a website with useful accommodation and dining links
♦ www.firenzeturismo.it – the official tourism website, with English pages
♦ www.florence-tourism.com – an easily navigated site with useful resources
♦ www.uffizi.com – the official website of the Uffizi
♦ www.florence-museum.com – links to the city’s museums and galleries, with lists of upcoming exhibitions

About the author:
Anne Harrison lives with her husband, two children and numerous pets on the Central Coast, NSW. Her jobs include wife, mother, doctor, farmer and local witch doctor – covering anything from delivering alpacas to treating kids who have fallen head first into the washing machine. Her fiction has been published in Australian literary magazines, and has been placed in regional literary competitions. Her non-fiction has been published in medical and travel journals. Her ambition is to be 80 and happy. Her writings are available at anneharrison.com.au and anneharrison.hubpages.com.

All photos are by Anne Harrison:
The Duomo and Baptistery still tower over Florence
View across the Baptistery to the hills, showing many torre
A replica of il Porcilleno for sale
The dominance of the Palazzo Vecchio
The frescoes of the Baptistery were known to Dante
The Ponte Vecchio, symbol of Florence
Restoration of works continues in the back streets of the Oltrano