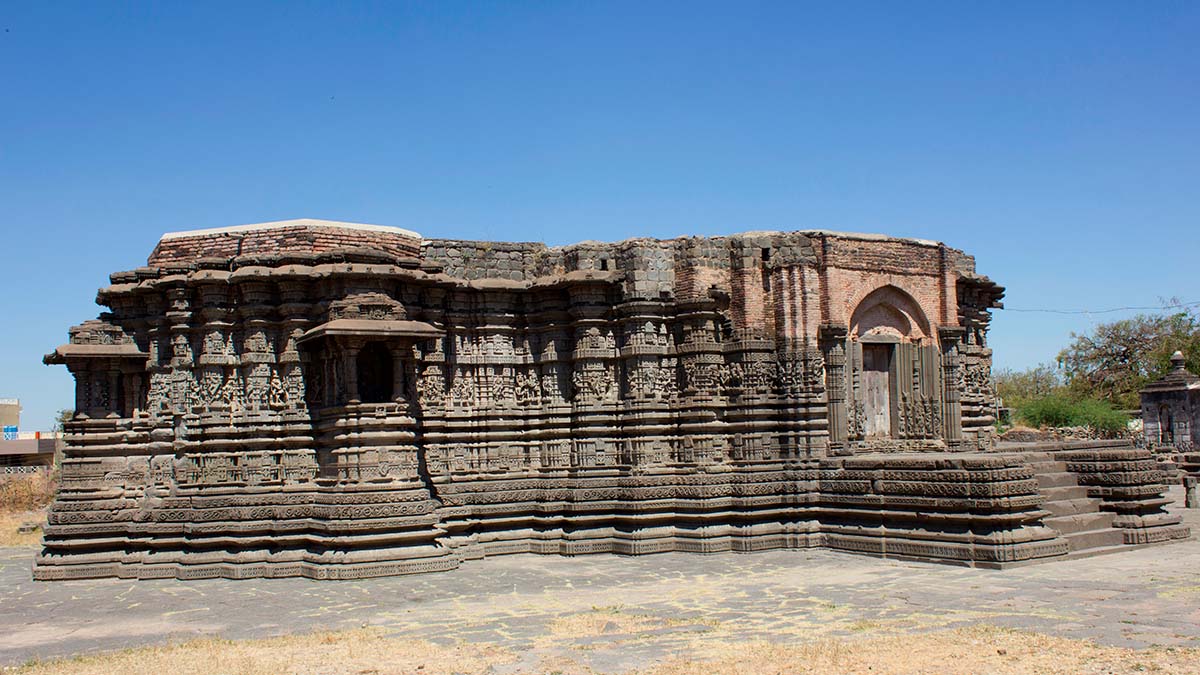 I was standing at the edge of the bowl-shaped hill hypnotized by the beauty of the aquamarine lake that lay glittering in the basin below – low-lying hill, dense forest and a tranquil lake. I stood there in awe when suddenly my mind took me eons back. 52,000 years ago a visitor from outer space weighing approximately 2 million tons traveled at a speed of 90,000 km/hr to meet the Earth. The visitor was a meteorite and what resulted from their encounter was an impact so severe that it formed a crater on the Earth 1.8 km in diameter. Standing at the upper rim of that very crater now, even a slight visualization of that Pleistocene phenomenon made me shudder from within. The crater is the largest impact crater in basaltic rock in the whole world today – the Lonar Crater. After the meteorite impact a perennial stream started running into the crater and over millennia the impact crater metamorphosed into a picturesque lake surrounded by dense forest. This lake is known today as the Lonar Lake.

The Lonar Lake finds reference as Viraj Tirtha in ancient Indian literature such as in the Skanda Purana and the Padma Purana. A poetic description of the lake can also be found in Canto XIII of the Raghuvansham of the renowned classical Sanskrit poet Kalidasa. In this epic poem the hero, Lord Rama, while flying in the skies with his consort Sita, lyrically describes the lake to her as: “glimmering from amidst the surrounding dense forest like the orb of the moon in a fleece of clouds.”

Tempted by the glamour of the lake I decided to walk down all the way to its waters. The Dhar Temple Complex (also known as the Gomukh Temple) on the upper rim of the crater is a nice point to begin your descent to the lake. The complex consists of Hindu temples dedicated to Narsimha, Ganesh, Renuka, Shiva and Vishnu. 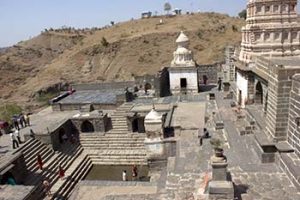 The pillars of the porches of these temples depict carvings from Hindu mythology.

A flight of steps from the temple complex led me down to the Lonar Lake.

The water of the lake is extremely salty and has a very high pH value, indicating high alkalinity. Yet despite the high alkalinity algae of a peculiar kind thrive in the waters of the lake. The lake and the surrounding area are also home to several water birds. I could spot the Rudy Shelduck (Tadorna ferruginea), Black-winged Stilt (Himantopus himantopus) and Red-wattled Lapwing (Vanellus indicus) among others. Adding a dash of history to the lake are the numerous ancient temples lying in the surroundings. I decided to do a circumambulation of the lake and say “Hello” to the ancient temples dotting its periphery. Sadly, most of these temples are now ruined and deserted. Worth mentioning though are the Yajneshwar Temple, Wagh Mahadev Temple and Kamalja Devi Temple. The Yajneshwar Temple has fine carvings and the Wagh Mahadev Temple, though plain from outside, is finely carved from inside, especially on the roof and on the pillars. Disclaimer – one has to tolerate the obnoxious stinking of bat droppings that litter the interiors of this temple. 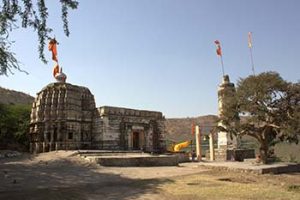 The Kamalja Devi Temple is the most famous and the most frequently visited of all the temples surrounding the Lonar Lake. And rightly so. The ambience here is pleasant and there is ample shade in case you need some rest. You could also spend a few moments watching the langurs or staring at the parrots whose shrill cries are sure to attract your attention. In addition, this is the only place near the lake where you can fill your quota of drinking water, in case you have exhausted your own.

Going around the lake is a pleasant walk especially if you are at the lake in the morning and should not take you more than 2 hours to complete the walk. Make sure though that you carry sufficient water along with you. If you have time at hand you can also explore the area watching water-birds or visiting the old temples around like I did.

Back to the Dhar complex with my mission of circumambulation accomplished, my next destination at Lonar was the Limbi Barav (Limbi Step-well). The Limbi Step-well is not close to the Lake but lies in the heart of Lonar village. The step-well is a fine piece of water architecture of the bygone era. At present though it is in a state of disuse.

Last on my Lonar to-do list was the Daityasudan Temple which dates back to the period of the Chalukyas (6th to 12th c. CE). The temple is dedicated to Lord Vishnu in his avatar of Daityasudan.

Hindu mythology is replete with duels between gods and demons. The demons are satanic bullies who keep harassing the populace (and sometimes even the gods) and wreak havoc until, at one point of time, the gods can take it no more. The onus of getting rid of a troublesome demon lies, more often than not, on Lord Vishnu who by some cunning kills the demon and restores peace, thereby establishing the triumph of good over evil. One such instance occurred at Lonar, say the Puranas, where Lord Vishnu killed a demon by the name Lavanasur. This act of Lord Vishnu earned him the epithet of ‘Daityasudan’, the Demon-slayer. 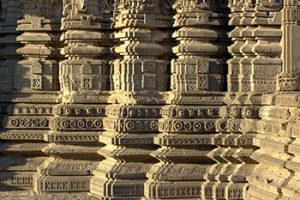 The exterior of the Daityasudan temple is a fine piece of ancient Indian sculpture.

The temple has an irregular stellate plan and is replete with layers of carving even on the plinth. The temple friezes are also a treat to the eyes. Being a Vishnu temple, the avatars of Lord Vishnu adorn the friezes galore.

With the Daityasudan Temple ended my daylong excursion to Lonar and I headed back to Aurangabad from where I had begun the excursion in the morning.

You may be a geologist or astronomer or bird-watcher or temple enthusiast or nature lover or even an ordinary tourist. Lonar is a multi-faceted place with something for everyone.

Lonar is the headquarters of the Lonar taluka and is situated in the Buldhana district of Maharashtra state in western India.

The most convenient city to visit Lonar is Aurangabad which is also the nearest airport. Aurangabad is well-connected to major cities in India both by air and road.

Where to stay:
Sight-seeing in Lonar should not take you more than a day’s time. One can arrange a day’s excursion by staying at Aurangabad city. However, in case you wish to stay in Lonar your best choice would be the MTDC resort near the Lonar Lake. MTDC stands for the Maharashtra State Tourism Development Corporation.
Suggestion: It may be a convenient option to visit Lonar along with the UNESCO World Heritage sites of Ajanta and Ellora Caves situated in Aurangabad district. 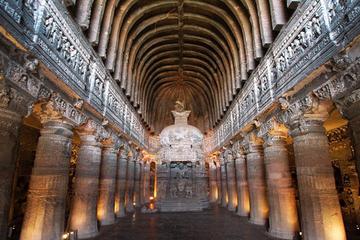 About the author:
Durgesh Nadkarni is a travel enthusiast passionate about traveling to unsung destinations, be it heritage sites or places of natural beauty. He loves to explore history, culture, art and architecture and loves photography and poetry. He is a regular contributor of photographs on www.stepwells.org.