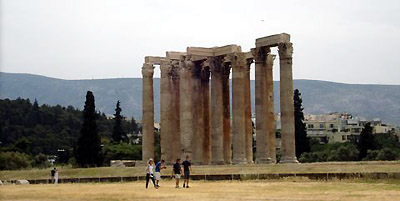 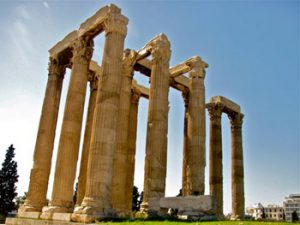 Intended to be the greatest dedication in the world, the Temple of Olympian Zeus actually had quite a long gestation period. The foundation was laid around 520 BC, over an existing outdoor sanctuary in the God of all Greek God’s honor, but a seize of the existing tyranny halted the construction. For some 330 plus years, during the Athenian democracy, Zeus’s house remained merely a platform and some partially constructed, yet utterly magnificent, limestone columns.

It is likely that the Greeks, already at issue with Pericles for the immense architectural undertaking of the Acropolis, saw the grand temple as superfluous, and let it alone for that reason. The Democratic Greeks were fairly modest people, in fact, Aristotle used the enormous partially constructed monument in his writings as an example of how tyrannical governments worked their people so much that they had no time to plan a rebellion.

Thankfully, for our future historic architectural enjoyment, King Antiochus IV Epiphanes believed himself to be the great Zeus reincarnate and set to complete the colossal structure in about 174 BC. While he held true to much of the original plan, he did not however feel that the modest Doric order and local limestone block was fancy enough for a temple dedicated to himself, or to Zeus, so he upped that ante and constructed the first temple in the high Corinthian order, pillaging the nearby Mt. Pentelic for its incredible marble. While a considerable amount of progress was made during this time, King Antiochus IV died halfway into construction, and again, the great God must wait. Antiochus’s death was followed by a period of pillaging…stealing parts of the structure for other temples, as well as some lame completion attempts, but nothing of any substance until, in walks the Roman emperor Hadrian. Visiting Athens and inspired by his love for classic Greek architecture, he took it upon himself to complete the temple some 650 years after the work began. 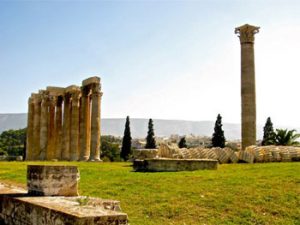 Today, all that is left of the colossal temple after centuries of pillaging and destruction is a platform and a mere 15 of the original 104 columns. Shortly after Hadrian completed the house of Zeus, it was partially destroyed, and likely never repaired. Then, in 1852, a killer storm toppled column number 16 to the ground. An unfortunate accident, but fortunately, the Greeks have left it there, crippled, for us to see.

While strolling through the center of Athens I could not help but feel modest gazing upon the Temple of Olympian Zeus, and while only a fraction of the original glory remains, this Corinthian masterpiece, this largest temple of antiquity, and the tribute to the God of all the Greek Gods is, in fact, humbling, beautiful, and inspirational. And, the longer I am here in its presence, inspired modesty and all, the more I feel my own “inner goddess” coming on. 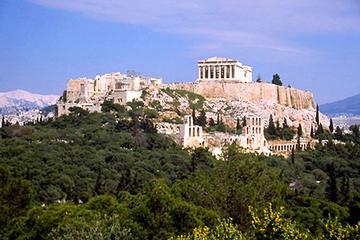 About the author:
Rachel Corrine is a creativist. She designs, writes, educates, inspires, and photographs. Richard Bach is her reluctant messiah and her son is her creative catalyst. You will currently find her somewhere in Europe…with the boy…taking pictures and gathering friends. Visit her web site at www.rachelcorrine.com.