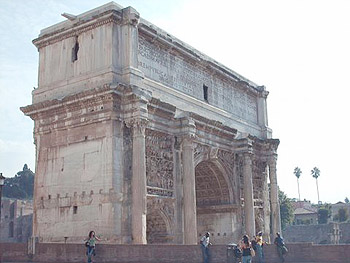 It’s my first morning in Rome, and I feel as if I have awoken on the surface of the sun. The city’s stifling heat blasts through the hotel room’s open window and seeps through every pore of my skin. The crisp sheets I fell asleep on are now a damp, sticky mess; I’ve spent the night marinating in a pool of sweat, roasted from the inside, like an animal on a spit.

“Wake up,” I mumble to Leah, who is splayed out on the next bed like a crucifixion victim. My words are obliterated by the noise outside. The streets below the window are deafening. I can hear people yelling at each other, although this seems to be the Italians’ standard decibel of conversation. The irritating grate of big-city construction reverberates throughout my skull.

We had arrived in Rome yesterday, and in a spasm of enthusiasm Leah and I signed up for a personal guided tour of the city. As I lie stiffly in the cramped hotel bed, basting in perspiration, I dimly recall signing up for an eight o’clock walking tour. It’s now seven. I am disoriented, and the elephant tap-dancing on my head suggests a mammoth hangover. Last night Leah had insisted on commemorating our first evening in Rome with a truly Italian experience. “We’re on vacation,” she lectured me, when I pleaded exhaustion from jet lag. “We’re not going to sit around doing our knitting.” With that she shepherded me forcibly to the nearest mercado, where she bought two monstrous bottles of wine for the absurd price of seventy-six cents each and she mimed for the grocer to uncork them. He looked puzzled.

“Andiamo”, she said helpfully, the only Italian word she knows.

We spent a pleasant evening wandering the sizzling, congested alleys, progressing from demure sips to enthusiastic swigs from hobo-fashioned brown paper bags. Our reception by the Romans was exuberant: we received several grins and nods of acceptance from passerby, and more than a few hearty toasts from strangers with their own paper bags. Apparently, wandering the city in various states of drunken cheer is a right of initiation. I felt as if the city had welcomed me with open arms. I try to recapture that merriment as I peel myself off the bed. It’s eight o’clock and the tour guide is waiting for us in the lobby. 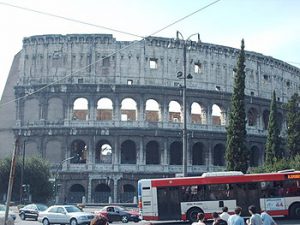 She’s a squat, busty woman with a violently garish pair of glasses so enormous they threaten to swallow her entire face. She introduces herself as Valencia, and proceeds to give us a bit of a geography lesson. “Please to imagine my body as Italia,” she instructs. “This is Roma.” She points to her left bosom with a talon-like fingernail. “This is Firenze.” Her fingers trail to her abdomen and circle her navel. “And Venizia is down…” As the fingers begin to plummet further, I snatch her wrist. I don’t want to find out where Venice is located on her rotund body.

Valencia squints suspiciously at me through her goggles. “Don’t want to be late for the Vatican!” I say brightly and I sprint across the lobby.

The Vatican is my first introduction to a European museum, which is kind of like learning to read from War and Peace. There is simply too much to absorb. Valencia schleps us around like she’s herding cattle. Leah and I soon give up on her and abandon her in one of the crowded exhibition rooms, sneaking off as she indelicately strokes a sculpture of a brawny centaur.

Leah and I do so much head swiveling, neck craning, and abrupt-reversing to catch something we missed that I soon feel like I need a chiropractor.

“I didn’t know we had to be so limber to appreciate this,” Leah says, peering under a gold-leaf bench to check out the detailing. She gets down on her knees and peeks behind the legs as if she’s on an Easter egg hunt. “I should have done more yoga.”

She’s got a point. Art is everywhere: on the walls, the ceiling, the floor, even the seating. At one point I sit on a bench to rest my feet, my hindquarters draped over a priceless masterpiece.

The museum astonished me by its opulence, yet it’s the Sistine Chapel that sends me to the moon. Even the crush of visitors doesn’t mask its elaborate grandeur. The Last Judgment, which stretches the room’s circumference, is breathtaking. I stand in the center and rotate slowly, allowing the surprisingly vibrant colors to wash over me. I feel like a player instead of a mere spectator, as if I could step onto a cloud with some muscular Adonis and feed him grapes. The painting is far too massive to fully comprehend, and there are too many details to note; I could spend all day staring at every single square inch and still not be able to wrap my mortal brain around its magnitude.

Unfortunately, my reverence is shattered when Valencia suddenly pounces on us in the center of the mob. Her glasses sparkle aggressively as she lectures us on the dangers of becoming separated. Her arms flail wildly in her distress, attracting the attention of several startled onlookers.

“I didn’t realize the Vatican was so perilous,” Leah murmurs. “Should I bring out the Mace?” 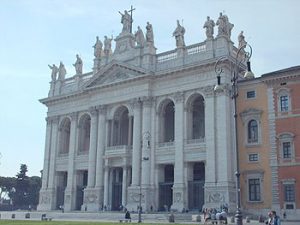 When she finally calms down, Valencia shares an interesting tidbit about Michelangelo’s fresco. He originally drew each figure nude to convey mankind’s equality in death. The Church, exercising its proclivity for condemning any suggestion of indecency, commanded him to paint over the naughty bits. Naturally he refused, so a “touch up” artist was hired to add strategically placed togas and animals and other such miscellanea. Although it brought the fresco to a G-rated level, it also destroyed the entire meaning. I can just imagine an angel lounging on a fluffy cloud somewhere on the vast canvas, cheekily holding a goblet of wine over his goodies.

An irate Michelangelo retaliated by adding something to the fresco himself: a self-portrait in the form of a rubbery, distorted human skin painted in an obscure corner. I suppose this response was meant to be a 16th century version of today’s middle finger.

After we’ve sufficiently ogled the Sistine Chapel, the three of us leave the air-conditioned Vatican for the oven outside.

“Now is ancient Roma. We have little time,” Valencia announces, and takes off at a gallop.

Valencia is unexpectedly agile. We don’t catch up to her until we’ve reached the Metro station several blocks away. In order to make my life as difficult as possible, the site of ancient Rome is on the other side of the city. Leah and I learn this only after miles of trekking after our babbling guide, who insists on detailing the history of each and every structure in our path. To add to our irritation, she half-jogs the entire way. The needlessly speedy pace is uncomfortable enough without adding the remnants of a hangover, the boiling temperature, and the swarms of tourists bumping and jostling us from all sides. By the time we arrive at the entrance to the Forum several millennia later, my heart is exploding painfully against my ribcage and every breath rips another gaping hole in my windpipe.

My first glimpse of the ancient ruins instills an odd feeling of displacement. It’s unsettling to catch sight of the looming monstrosity that is the crumbling Coliseum amid its incongruous setting. Ruthless gladiators and ferocious animals once fought to the death inside its walls, yet now I catch sight of a beaming man at the entrance selling overpriced souvenirs, as a bus laden with Armani advertisements lumbers past. 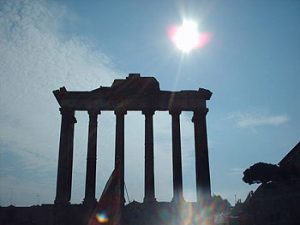 We wander through the vast Forum. It looks like an archaeological dig, with its mounds of dirt and randomly scattered monoliths. Its ancient, imposing edifices are resplendent under the sun. Despite the majestic glory surrounding me, I can’t help musing about the pathologies of the ancient Romans. I find it slightly disturbing how bloodthirsty and ruthless they must have been to enjoy watching the gory gladiator battles that were so popular.

“Yeah,” Leah agrees when I share my thoughts with her, “think of the job titles. I can just picture a teenager getting all excited because he got his first job as corpse-remover at the Colisseum.”

Of course, it was the gladiators who got the worst deal. Aside from having to entertain seventy thousand barbarians roaring for blood in the stands, they had to face each battle with the expectation that it would be their last. And as if excruciating death in the ring wasn’t enough, Valencia informs us that the pre-show often consisted of random executions during which spectators in the front rows were sometimes spattered with blood. I can’t believe people paid to see these distressing spectacles. One admission to the Coliseum: three goats and half your property. Mentally unhinging your kid: priceless.

By the time seven o’clock rolls around, Leah and I have traversed the entire Forum and are covered in fourteen hours’ worth of sweat, grime, and blood. I feel like a gladiator. Overriding Valencia’s resolved determination to lecture us about every single bit of dirt on the Forum grounds, we stop at the base of the Corinthian columns and collapse in exhaustion. After a lengthy dispute, we finally manage to convince our guide that if we don’t stop for the day, she might wake up the following morning to find herself buried under an obelisk.

“Well,” Valencia sighs, “there is much more to cover but…” A crafty look spreads across her face. “I guess Roma is not built in a day!”

Oh God, I knew that would crop up somewhere.

About the author:
Sonu Purhar recently graduated from Simon Fraser University. The semester she spent studying in Italy and traveling around Western Europe inspired her to write two travel articles, both of which have been published on separate travel websites. She has written several non-travel articles and is currently working on (many) writing projects.
Contact: spurhar@sfu.ca