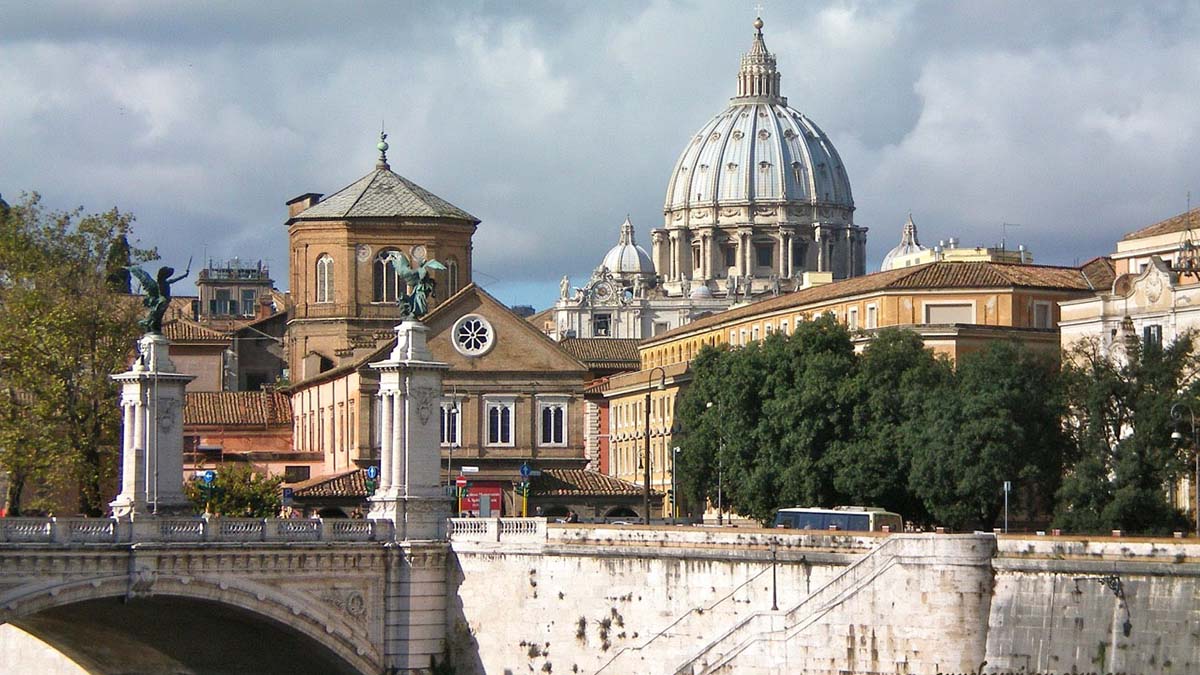 By the time we left the hotel, it was already late afternoon, and our plane left at dawn. The buildings shimmered with a golden glow particular to Italian cities of stone and marble. 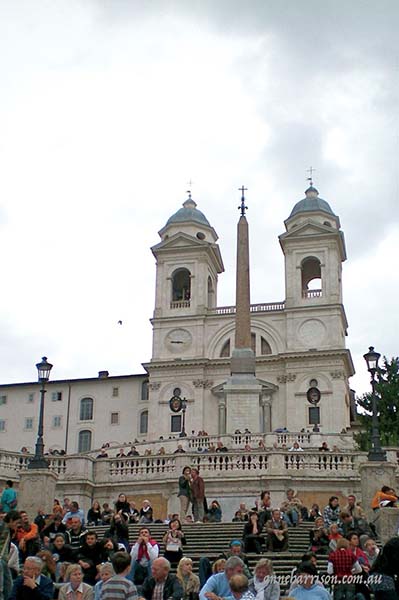 After fortifying ourselves with an espresso, we strolled to the stylish Via Veneto. Lively and fashionable back when Rome was ruled by the Caesars, just on a century ago this ancient quarter consisted of terraced gardens and vineyards. Then the Prince of Piombino sold part of his country estate to develop a luxurious neighbourhood of piazzas and palazzos. (The design proved so successful the Prince could no longer afford to live here.)

The Via Veneto opens onto the Piazza Barbarini. Here stand two of Bernini’s fountains; his first -The Triton – and The Fountain of the Bees. He designed the latter around the Barbarini’s family emblem, in deference to his patron, Pope Urban VIII.

From here, narrow streets wind to the top of the Spanish Steps.(On the Via Sistine is the convent Nostra Signora di Lourdes, one of the many throughout Italy to take paying guests.) At the top stands the Trinita De Monti, a twin-towered Gothic church built in 1495 by Charles VIII of France. As we arrived a bride and groom left to the accompaniment of peeling bells. The church contains two works by Daniele da Volterra, a pupil of Michelangelo, (who was later ordered by Pope Pius IV to paint clothes over the nude figures of the Sistine Chapel).

Immortalized by Audrey Hepburn in Roman Holiday, the Spanish Steps offer an unforgettable view across the roofline of Rome. Bronze domes glimmered under the setting sun; Keats looked onto them as he lay dying in a house in the Piazza di Spagna below.

At the bottom of the stairs is an unusual fountain, La Barcaccia. Designed by Bernini’s father, it resembles a leaking ship. Tradition holds he chose such a shape after the flooding of the Tiber on Christmas Day in 1958, which left a boat in the piazza. Pieces of travertine at either end of the fountain serve as stepping stones for anyone wishing to use the water; La Barcaccia is one of the many drinking fountains scattered across Rome.

The evening promenade filled the piazza, spilling into the Via Condotti with its lining of expensive boutiques. Yet despite the crowds, the nearby Via Margutta remained relatively empty. This street belongs to artists, and connoisseurs of art. A few small shops, unchanged in appearance for hundreds of years, simply but elegantly display a single old print or painting in their window. 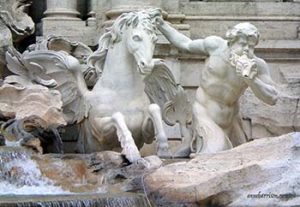 After tossing a coin in the Trevi Fountain, our path wended towards the Tiber. Near the Ponte Cavour is one of the most significant monuments of Ancient Rome. Commissioned by the Senate in 13BC, the Ara Pacis Augustae (Altar of Augustus’ Peace) it is a three-dimensional record of 4th July, 43BC, when Augustus was given a hero’s parade after his victorious campaigns in Gaul and Spain. The Emperor can be seen leading the procession with his family and friends, with the next emperor, Tiberius, beside him.

Preserved under glass, this work is so exquisite some believe it executed by Greek artists. Drenched in spotlights, at night the Ara Pacis Augustae is more than a ghost of days long gone; it’s a dramatic reminder of the power and cultural achievements of Imperial Rome. 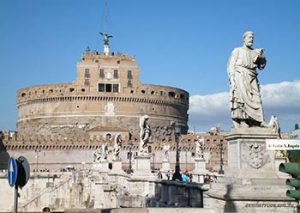 We crossed the Tiber on the Ponte Sant’ Angelo. Closed to traffic, this bridge is a quiet place to gaze over the city and river. Built by Hadrian in 134 AD, it connects the city to his future tomb, the Castel Sant’ Angelo. In the 17th century, Bernini adorned the bridge with ten ethereal angels who stand in a perpetual gale, their draperies tossed by a stone tempest.

The Leonine Wall runs along back streets from the Castel Sant Angelo to the Vatican, behind shops selling rosary beads and cardinals’ socks. These streets are often empty, as most tourist approach St Peter’s along the grand Via della Conciliazione. Like Florence’s Vasari Corridor, the Leonine Wall houses a secret passage which connects the Vatican to the Castel. More than one pontiff has beaten a hasty retreat along this ‘passageway of popes’.

By moonlight, St Peter’s Square has a magic magnified by the stillness. Even the pigeons have gone. Bernini likened the marble colonnade stretching around the square to the embracing arms of the mother church. The Basilica was closed, watched over by Swiss Guards in their colourful uniforms and long capes. Yet in a nearby building an open bronze door offered a glimpse of endless corridors, with a few officials strutting importantly past.

We crossed back over the Tiber near the Isola Tiberina. This boat-shaped island has been associated with healing for over 2000 years, having been dedicated to Aesculapius in 293BC. The islands hospital, run by The Brother’s of John of God, still administer to the needs of ill Romans.

Walking along the dimly lit Via del Gonfalone, the sound of clinking cutlery led us to an unmarked door. Inside, a fire blazed, and metre-thick walls of medieval brick supported a roof of exposed timber beams. A charming waiter deciphered the menu for us, stopping only at veal castrata. Perhaps it was the magic of the night which made this one of the best meals we had in Italy: Tuscan wine, antipasto, fresh bread, minestrone, veal staccota and lemon cakes.

Our route home took us past the only perfectly preserved ancient building in Rome. The Pantheon, in the Piazza della Rotonda, was designed by the Emperor Hadrian in 125AD. Hadrian made the unique design of a Roman dome on a circular base, in the form of a Greek temple, all in perfect proportion and symmetry. The dome is higher than St Peter’s, and its consecration in 609AD prevented the plundering which destroyed so much of Ancient Rome following the Empire’s protracted fall. 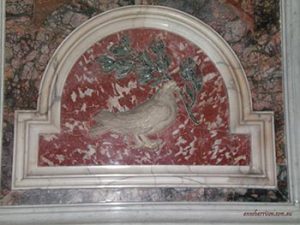 Next time I will return during a thunderstorm, when the rain splatters through the roof’s circular opening onto the marble floor, and lightening illuminates the tomb of Raphael.

The Piazza di Sant’ Eustachio is reached from the Pantheon via the narrow Via Palobella. This small piazza was filled with locals making a detour on the way home for Rome’s best coffee. The tiny Sant’ Eustachio Cafe was filled to overflowing, with people spilling out into the piazza with their coffees. By this time of night the coffee was served heavily laced with aniseed, giving it an almost mystical quality.

It may border on sacrilegious to spend only one night in Rome, but a traveler adapts to what is available. We’d touched on the spirit of the city, and there is always next time. There has to be, else we could never leave.

Rome Uncovered: A Fully Private Walking Tour Through the Most Iconic Places of Rome

Ever considered staying in a convent or monastery? There are numerous websites to help, such as: www.bookingmonastery.com or http://www.monasterystays.com.

For ideas on what’s on in Rome

About the author:
Anne Harrison lives with her husband, two children and numerous pets in regional Australia. She discovered travel at the age of ten, then the world of history and philosophy. Her jobs include wife, mother, doctor, farmer, cheese-maker and local witch doctor, and her ambition is to be 80 and happy. Read more at anneharrison.com.au and http://hubpages.com/@anneharrison.

All photos by Anne Harrison
A view towards St Peter’s from the Tiber
The ever popular Spanish Steps
A detail of the Trevi Fountain
The Castel Sant Angelo
Raphael’s tomb, the Pantheon