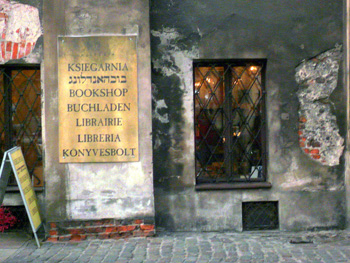 After exploring the delights of the Rynek Glowny (Krakow’s Main Market Square) my husband Kent and I set out to discover Krakow’s old Jewish Quarter…Kazimerz. It’s few minutes by tram (#7, #13, #24) or, a very leisurely twenty- minute walk.

At its inception, Kazimierz, founded in the 14th century by King Casimir the Great, was a separate town from Krakow. It was once Krakow’s “medieval twin”. Until the outbreak of World War II, the Jewish religion and culture thrived here. It was the safe haven for Jews from every corner of Europe until the 20th century. It was also a major center of Diaspora (an area outside Palestine settled by the Jews). Then, with the onset of World War II, it became the scene of Nazi devastation. However, there are still significant reminders, of a substantial Jewish community that once existed from 1500 to 1940’s …the forgotten grandeur and landmarks of Kazimierz, 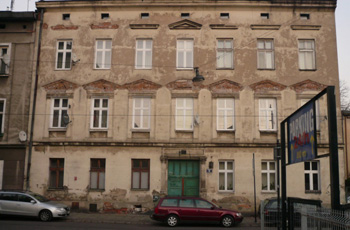 In March 1941, the Germans forced all Krakow Jews to resettle in the newly created ghetto of Kazimierz. The Nazis liquidated it only two years later on March 13, 1943. Most of the 17,000 inhabitants perished in the Nazi concentration camps. Today Krakow has only about 200 Jewish residents.

Kent and I found that Kazimierz is best discovered on foot. There were so many times we wanted to just stop and reflect on the history before us. As we strolled along Ulica (street) Szeroka we noticed that the signs in Polish were slowly morphing into Hebrew.

Ulica Szeroka runs north and south and has parking available all along the middle of the street. It is not what you would call glamorous; in fact it is a little run-down. It was a nice place to go for a walk as we found out, or just sit and take in the atmosphere 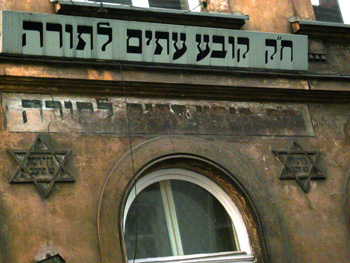 Kazimirez is not beautiful; many of its buildings are run down. A few night clubs have emerged around the Square. We enjoyed just sitting and people watching… modern day residents and a few Jews dressed in shawls and yarmulkes. And, of course, the foreign tourists.

At the top of the Square (Szeroka 2) is the original Jarden Bookshop, going back to pre- World War II. It also doubles as a tourist information source. The Bookshop also runs tours of the area.

At Szeroka Street 40, we entered the Remuh Cemetery. A few worshipers were praying or cleaning grave sites. The cemetery had been widely used from 1551 to 1800. It has hundreds of old tombstones, dating mostly from the Renaissance…still readable.

The synagogues that still stand are not in the best of condition and the actual Jewish quarter lacks the pre-World War II Jewish atmosphere. Almost all have left the area. 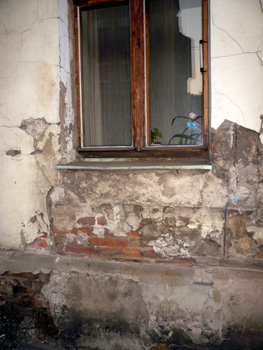 The next thing on our list, however, was to sample some of the local food. There was no shortage of Jewish themed restaurants and shops.

We opted for the Kazimierz Market Square or Plac Nowny. It was appealing because it was made up of mostly local working folks walking over for lunch or on a snack break. Never mind that comprehending both Hebrew or Polish were out of our league! At one of the stalls we nibbled on zapiekanki. This is a fantastic toasted baguette with cheese, ketchup and other toppings.

After a little nibbling, shopping and people watching, it was time to explore more of Kazimiretz’s history.

Many synagogues that did survive the war were badly damaged. We visited the Isaak Synogogue built in the 17th century on Kula Street. This is one that had been badly damaged during the War and is still in a restoration process. The historical documents on display are, tremendously interesting. Not just the writing, but the paper and inks used as well. 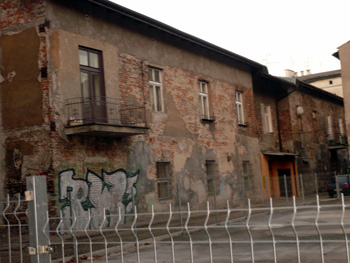 Another interesting feature are the walls in the prayer hall. Prayers have been painted on the walls for worshipers who couldn’t afford prayer books. Most readings have even been translated into English. A plaque outside states the synagogue was constructed in 1638, so there is some serious history attached to this place of worship.

At Ulica Szeroka 24, the Old Synagogue is the oldest surviving Jewish building in Poland. We found incredibly interesting displays on Jewish life in the Main Prayer Hall (with English translations.) They also play a short film taken before World War II showing everyday street scenes in happier times. When we stepped outside, we realized the film was shot right there, but now there are very few Jews, just their names on buildings and streets. 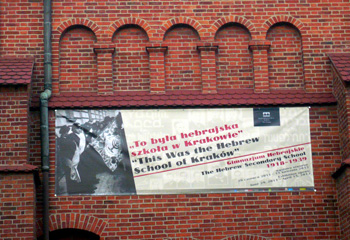 In addition to the Jewish element, Christianity also had a role in Kazimirez. The Church of Corpus Christi has an awesome historical interior. There are stalls going back to 1629, the altarpiece of 1634, and the ornate mid-18th-century pulpit.

Since the late 1980s the area’s Jewish heritage has come back to life, the progress aided by the success of the Spielberg film, Schindler’s List. The restored synagogues cafes, bars, and restaurants are restoring life back into the Jewish Quarter.

Spielberg needed an authentic Jewish quarter for the scenes depicting the Jewish ghetto of Podgorze in Krakow. He chose Kazimierz because this area had not changed since the 1940s,

The entire Kazimierz district is on the UNESCO World Heritage List as an historical monument.

Schindler’s factory:
Wander through Kazimierz, then across the Vistula River Bridge to Podgórze to see more of the Nazi Kraków Ghetto and, a factory of Oscar Schindler. The latter saved nearly 1,200 Jews from the camps. Many of the surviving remnants of the World War II ghetto still exist here.

Walking Directions to Kazimierz from Wawel Castle (Krakow):
Stradom Street leads straight from the Castle’s base to Krakowska Street, and the central thoroughfare of the Kazimierz district. 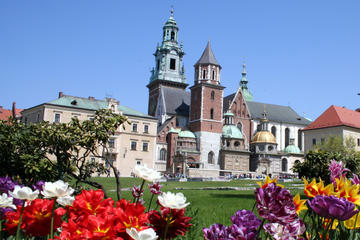 All photos by Wynne Crombie.