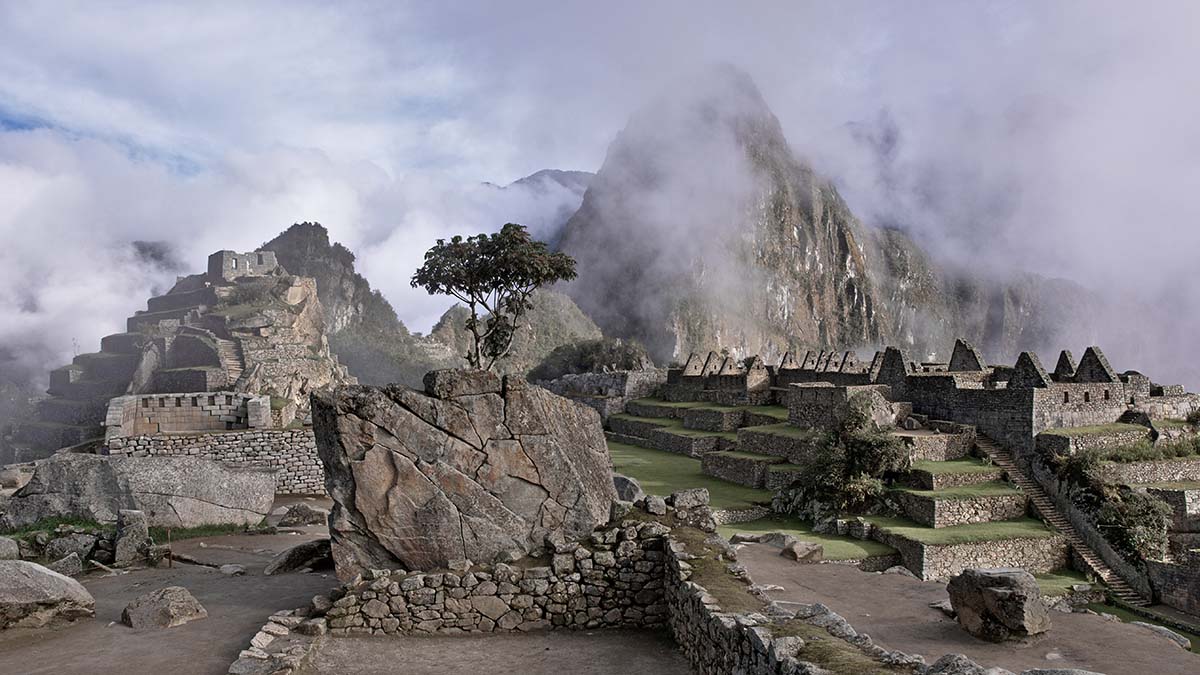 by Thomas Lera and Sandy Fitzgerald

At the end of the 15th century, the secluded Inca citadel Machu Picchu was a vibrant city still being carved into the Andean peaks flanking the Urubamba River canyon. Over 200 buildings already provided housing, temples and storage facilities for the city’s 1,200 residents. Vast tracts of land had been terraced for farming. Over the next 27 years, more than half of the entire Inca population became infected with smallpox and died. Machu Picchu fell into disuse, and, quickly enveloped by the robust undergrowth of the jungle, became motionless, frozen in time. 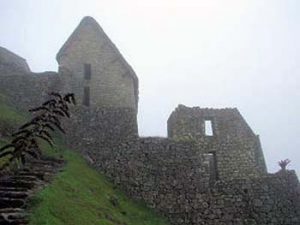 Luckily, this religious center was not discovered, sacked and pillaged by the Spaniards like so many other of their conquests. Its remote location at the end of an insignificant road cut through treacherous mountainous terrain, high above the Urubamba River canyon, helped guarantee the fact it would have no significant commercial, military, or administrative use. The site remained largely untouched for more than four centuries until Hiram Bingham, on an archaeological expedition funded by Yale, discovered it in 1911.

Machu Picchu drapes across the top, and spills down the sides of a vast mountain area strung between two distinct Andean peaks: the now famous Inca Trail begins high on the mountain’s south side at Intipunku, the Sun Gate; Huayna Picchu soars above the site on the farthest northern extremity like a silent guardian. If you can muster the strength, a hike to the top of either should not be missed as it provides an outstanding view of the ruins and surrounding valley. 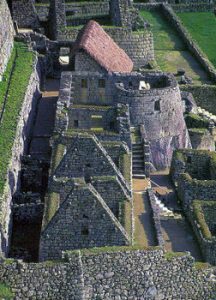 Machu Picchu can be geographically broken down into agricultural and residential areas. From both the trail entrance and the main ticket gate you enter through the agricultural zone. The contours of these slopes are hugged tightly by many layers of stone walls several feet high, built to reduce erosion and increase the square footage available for agriculture. The Inca employed advanced terracing and irrigation methods to assure a high yield of the maize and potatoes they grew.

We were fortunate enough to visit with an excellent guide two hours before the general public was admitted, and strolled quietly along its main avenues and smaller streets. As we walked toward the center of the complex, the most important temples and structures revealed the incredible craftsmanship the Inca used in building them. Enormous granite blocks had been cut by hand with bronze or stone tools, then smoothed with sand. The mortarless blocks still rest so solidly together it is impossible to insert a knife blade or even a credit card between them – we tried.

Many of the structures also utilized existing stone formations in their construction. A few temples clutch the edge of steep precipices, displaying a oneness with nature. What has become known as the amazing astrological center was built upon the outcropping of an existing megalith, with windows through which the sun’s first rays shine as they peek slowly over the adjacent mountain on both the summer and winter solstice. 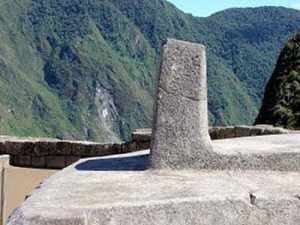 Another of the many important structures at Machu Picchu is the Intihuatana. This stone column rises defiantly from a box-shaped slate platform. Intihuatana literally translates to “for tying the sun” but normally is translated as “hitching post of the sun.” History tells us as the winter solstice approached and the sun began to shine fewer hours each day, a priest would hold a ceremony to tether the sun to the stone to prevent it from vanishing entirely. Technically known as a gnomon, this genre of stone existed at many other Inca sites but was always destroyed by the Spanish. Thankfully this one remains, offering the meaning and significance surrounding it from its conception.

Surprises abound around every corner. Three dimensional sculptures carved into the rock in odd places appear as if by magic, and water still flows through ancient cisterns and stone channels. After hours of exploring we sat on a wall high along the edge of the city. Gazing down at this astounding group of residences and astrological temples, we were awestruck by Machu Picchu’s magic. Speech was superfluous. We could almost feel the deep pride, reverence and spiritual devotion of the ancient Inca, and this had nothing to do with altitude! 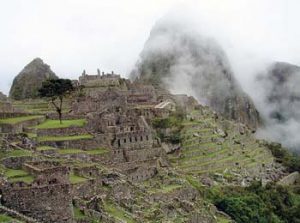 Even the many tour groups which had trooped in and out during the day had done nothing to spoil the place for us. For a few precious moments, meandering down ancient trails, forgetting about the existence of buses, trains, cars and the world outside, we felt like Inca.

We boarded the bus back to our hotel in silence just before sunset. A young boy raced us to the tourist village of Agua Calientes, swiftly moving down ancient stone steps and unseen trails. He taunted us at various turns and switchbacks by waving, then ducking back into the bush, only to appear again at another turn. He won the “race” as the switchback road was much longer than the steep trail he had navigated.

The next morning rain drenched the village, washing away all evidence of our visit. The mountain top cradling the ruins was shrouded in impenetrable clouds, and Machu Picchu was once again hidden as if it never existed. Its impact on us, however, would never be lost. 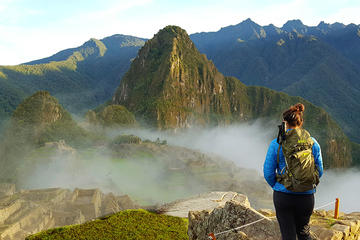 HOW TO GET THERE FROM CUSCO:
A 3 ½ hour journey on PeruRail is highlighted by wonderful mountain vistas and the beautiful Urubamba River which runs through the Sacred Valley of the Andes. On arrival in the town of Aguas Calientes, hop on a bus to traverse the last two kilometers up the mountain to the entrance. Trains leave at 6:00 AM and 3:30 PM for a round trip ticket is $73 per person. 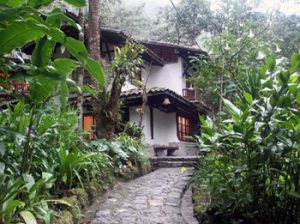 WHERE TO STAY:
Aguas Calientes has a wide range of hotels from hostels to the exquisite. We stayed at the Machu Picchu Pueblo Hotel, which is now the Inkaterra Machu Picchu Hotel. Located in the cloud forest in the heart of the Machu Picchu Historical Sanctuary its 85-bungalow style cottage rooms are designed to give you the feeling of an Andean village woven throughout miles of trails. The “village” is complete with waterfalls and cloud forest gardens with over 375 different orchids, 175 species of birds and 125 varieties of butterflies. Our stay at this hotel was an eco-traveler’s paradise melding into the Machu Picchu spiritual experience. There are a variety of rooms available from the simple to the luxurious with corresponding costs. Our room was a welcome oasis with its large natural stone shower area and large working fireplace – both of which took the slight chill off the night an relaxed our tired muscle into a blissful nights’ sleep. Visit www.inkaterra.com for information.

About the author:
Thomas Lera is the pretentious literary persona of a real person, occupying the ever brief moments that lie between his many faces as adventurer, traveler, scholar, conservationist, and wage slave, while providing an excuse to refer to himself in the third person. He currently resides in Virginia and is collaborating with Dr, Hannibal Lecter on a cookbook. tikal22042@gmail.com

Photo credits:
First Machu Picchu photo by Tomas Sobek on Unsplash
All other photos are by Thomas Lera.