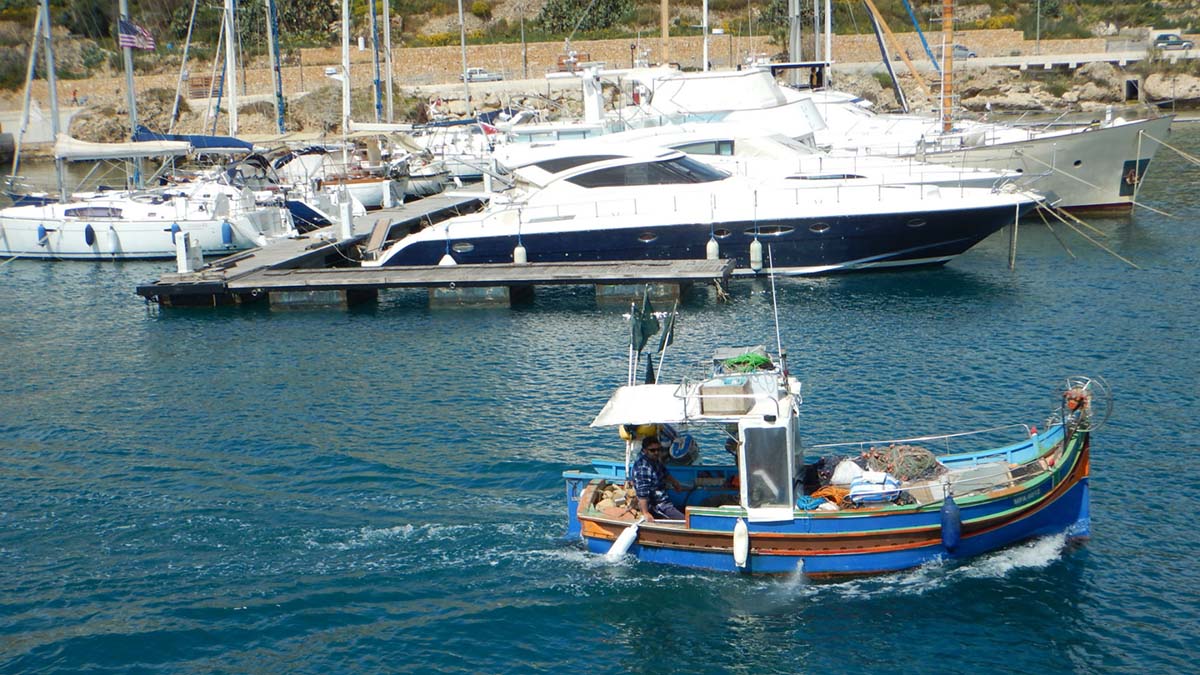 The Republic of Malta consists of three islands, Malta, Gozo and Comino. This unique country boasts a rich and diverse history that dates back 7000 years. The islands have been inhabited by the Phoenicians, Carthaginians, Greeks, Romans, Byzantines, Moors, Normans, Sicilians, Spanish, Knights of St. John, French and British who have all left their mark. With over 300 churches, quaint fishing villages, fortified walls, watch towers, museums, megalithic temples, pristine beaches and delightful bays, there is much to see and do.

We arrive once by sea and once by air. What strikes me both times is the natural look of the country due to everything being built from the limestone found in abundance on the islands. The ancient buildings, fortresses and watch towers blend in well with more recent construction. It is the juxtaposition of the old and the new that I find so fascinating.

A rare rainy day in Valletta finds me in the Museum of Archeology, a perfect place to learn about the early history of Malta. Housed in the Auberge de Provence, a baroque building built in 1571, with richly painted walls and a wood beamed ceiling, it is a beautiful setting to view ancient treasures. The Museum exhibits artefacts dating back to Malta’s Neolithic period (5000 BC) up to the Phoenician Period (400 BC). On display are the earliest tools used by the prehistoric people providing an insight into their daily lives. 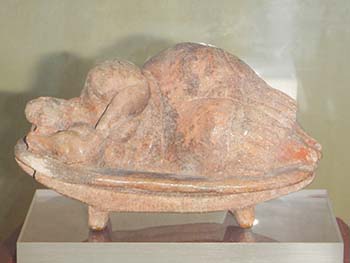 The highlight for me was the 5,000-year old ‘Sleeping Lady’ from the Ħal Saflieni Hypogeum. An amazing example of craftsmanship from prehistoric times, this small ceramic figurine about 12cm in length, was found in a pit at an ancient underground burial place. Among other fascinating artifacts is an anthropomorphic sarcophagus from the Phoenician Period.

There are many remarkable churches and there is a risk of getting overdosed but a must see is St. John’s Co-Cathedral in Valetta. The plain facade looks more like a fortress and gives no indication of the marvels inside. 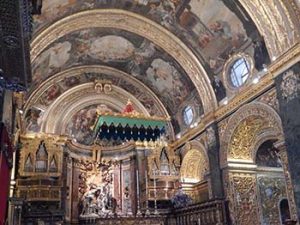 This church of the Order of the Knights of St. John was completed in 1577. The interior was originally very simple but over the years the Grand Masters and Knights donated gifts of artworks and financial contributions to enrich it. The interior now drips with gold, ornate statues and exquisite paintings. The original painting of the beheading of John the Baptist by Caravaggio hangs in the Oratory. I am awestruck as I stand in front of this astonishing work of art. Photographs are not allowed so you will have to take my word for it. I was, however, allowed to take pictures in the opulent Sanctuary. The cathedral houses a museum with elaborate vestments and incredible Flemish tapestries. The urge to snap a couple of photographs is strong but I resist. I also resist touching the centuries old tapestries representing hours and hours of labour.

The Knights of St. John established the Malta we know today in 1566 when they liberated the archipelago from the Turks and built the fortresses and watchtowers that still stand. The Grande Harbour is a busy place with boats of all sizes and a wonderful view of Fort St. Angelo That has guarded the harbour for centuries. I am intrigued by the colourful traditional fishing boats called Luzzus with the Eye of Osiris painted on each side to protect them from danger. 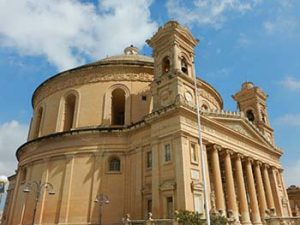 A bus trip to the market town of Mosta in the centre of Malta brings us to a domed cathedral built in the mid-1800s. This marvellous piece of architecture features the third largest unsupported church dome in Europe. Dedicated to the Assumption of Our Lady, it replaced a much smaller church that had been on the site since 1619. The Mosta Rotunda is the site of a modern day miracle. During WWII, on April 9, 1942, while over 400 parishioners worshipped inside, a 200 kg German bomb hit the church, pierced the dome and landed in the aisle. It rolled to the base of the pulpit and stopped. It did not hit a single person and it did not explode! The bomb disposal team removed it, defused it and threw it into the sea. A replica of the bomb can be viewed in the sacristy. It gives me goose bumps to see this. My husband points out where the bomb entered the dome as the coloration where it was repaired is slightly different. We end the visit with a tasty lunch in a restaurant across the street overlooking the Rotunda, wondering how the parishioners felt when the bomb fell at their feet.

We take a boat trip to the island of Gozo, passing the small island of St. Paul where in AD 60, the Apostle Paul was shipwrecked on his way to Rome. During his stay on the Maltese Islands, he converted the inhabitants to the Christian faith. 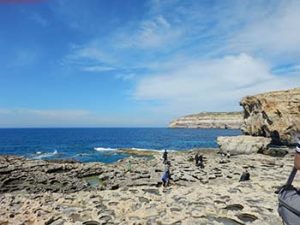 Once on Gozo, we visit Dwejra the site of the famous Azure Window seen on postcards and calendars of Malta and featured in a number of movies and TV shows such as The Game of Thrones. Just two weeks earlier this important landmark fell into the sea. An example of how nothing lasts forever. The view from the rocky shore is stunning nevertheless.

We also stop at the Ta´Pinu Sanctuary where every year pilgrimages are made to Our Lady of Ta´Pinu who is believed to have healing powers. A wall in the church displays crutches, plaster casts and pictures as offerings by those who have been healed. A sandwich on delicious Maltese bread near the Citadel in the ancient capital city of Victoria ends our visit to Gozo. We would have liked more time to explore.

On the return trip, we dock at the uninhabited island of Comino which is a nature reserve. A walk up steep stairs, past a shrine set in the rocks, takes me to a view of the crystal blue waters of the Blue Lagoon. I don´t think I have ever seen such clear water. Some visitors swim and others sun on the rocks. Trucks serving snacks are available for those who get hungry or thirsty. We enjoy the spectacular views as we head back to the island of Malta. 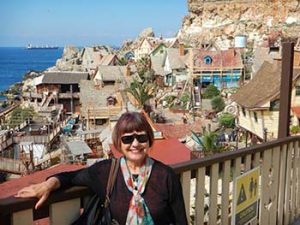 We take a break from historical sites and cathedrals and visit the whimsical film set of the 1980 Popeye Movie, filmed on Malta. Popeye village rests on the edge of a peaceful cove in Anchor Bay and is now a tourist attraction. I feel like a kid again as we wander the streets of Sweethaven, the home of Popeye, Olive Oyl and Swee´pea. To construct this authentic wooden village, tree trunk logs arrived from Holland, and wood shingles, used in the construction of the rooftops, were imported all the way from Canada. There are plenty of activities on the site including a boat ride around the bay. Characters from the story are happy to pose for pictures, answer questions and entertain the guests. A comic museum displaying various comic strips since the character of Popeye the Sailor man was created by Elzie Segar in 1929, brings back great memories. A fun day.

There is so much to see and do in Malta, a week isn’t nearly enough. This country, with its famous balconies, exquisite doorknockers, hospitable citizens and well looked after feral cats should be on everyone´s must-see list.

Malta can be reached by air from any major airport. We flew from Barcelona. It is also included on some Mediterranean Cruise ports of call.

Cars can be rented but be aware the traffic can get very congested. Public transport is easy to get around and very inexpensive. Many bus and boat tours are available.

Accommodations are plentiful. We stayed in the Bugibba area near St. Paul´s Bay which was very pleasant. If you like to party and don´t mind a noisy atmosphere, Valletta may be your thing.

There are many choices for food so there is something for everyone but you must try a pastizzi (flaky pastry parcel filled with ricotta or mushy peas).

The Maltese language is difficult to get your tongue around, however everyone speaks English as well. 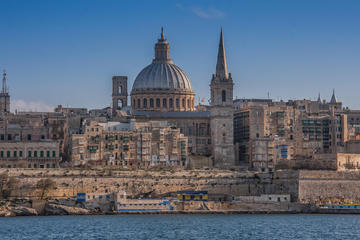