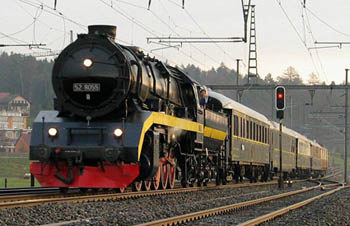 ’, I wanted to travel on that train. To indulge in the gilded luxury of the train itself, let the mysterious landscapes of the Balkans glide past my window and alight at the final destination: Istanbul, the city which straddles two continents. At the beginning of the 20th century, an infatuation with Istanbul and Turkey had taken hold of European society; actors, artists, writers, journalists and plain rich people, flocked to the Bosporus and their favorite means of transport was the Orient Express. 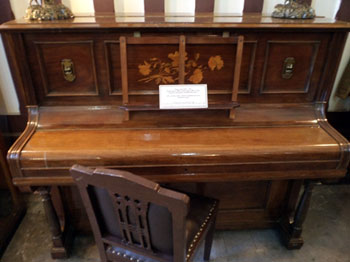 Composed of sleepers, a dining car and a baggage car, the train featured Lalique chandeliers, a piano and the finest crockery and cutlery. The maiden journey started on October 10th 1882 in Paris and reached Istanbul the next day. The menu consisted of no less than seven courses, oysters and turbot in green sauce included, not to mention fine wines and champagne. In 1977 the train ceased to have Istanbul as its final destination and in 2009 the Orient Express disappeared entirely from the time tables. Several other routes continue though and twice a year the historical trip is repeated, at a very stiff price!

Since I couldn’t afford that luxury, I was nevertheless able to relive Orient Express romantic and nostalgia in Istanbul’s Sirkeci gare. 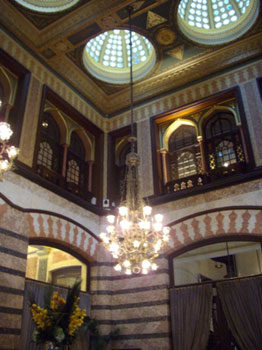 The pink and white structure of the railway station is located in Eminönü on the shores of the Bosporus. Designed by German architect August Jachmund, it’s the best example of European Orientalism, combining elements of Ottoman architecture with modern amenities such as gas and later electric lighting and heating in winter.

As I entered through the elaborate doors, I could well imagine fur clad ladies in pearls and cloches, tripping along the platform, followed by an army of porters bogged down by travel trunks.

They might rest in the Orient Express restaurant, where I sat down for a coffee and a few baklavas and admired the beautiful stained glass windows and Tiffany lamps which still evoke the atmosphere of times gone by.

As I got up to head for the restrooms, I discovered to my delight a tiny museum right next door which is easily overlooked if you don’t know it’s there. 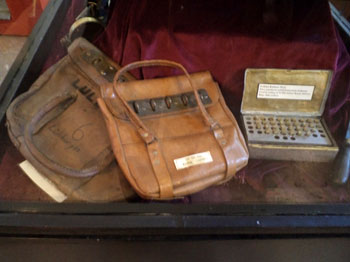 It’s only one room, but the museum documents the history of the Orient Express and the train station in detail. Old log books are displayed as are conductors’ uniforms, the piano, a table laid with the original cutlery and crockery, tickets and many more memorabilia. Photographs adorn the walls and examples of the technology of the time are on display too. I loved the newspaper clipping of when the train got stuck in a snow storm in Bulgaria, very reminiscent of the plot of Agatha’s novel. Admission is free and you are allowed to take as many photographs as you want.

There is just one single guard watching over the treasures and he is happy to answer your questions.

Another Istanbul landmark closely connected to the Orient Express and Srikeci gare is the Pera Palace Hotel. 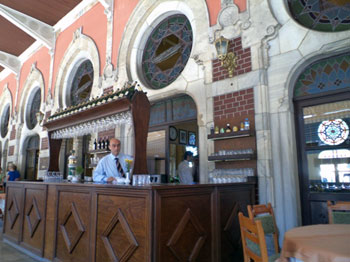 As affluent Europeans started to descend upon romantic Istanbul, using the Orient Express, they needed an equally elegant place to rest their heads. The city was decidedly short of such type of establishment and that’s how the Pera Palace was conceived. The first super luxury hotel of Istanbul, located in fashionable Beyoglu (then called Pera) opened its door with an inaugural ball in 1892.

Passengers from Sirkeci Gare were carried in sedans all the way up to the Golden Horn and one of these sedans is still displayed in the Pera Palace, next to the elaborate elevator which was the first of its kind in Istanbul. As were other amenities such as hot and cold running water. There are many ‘firsts’ for the Pera Palace, including the first ever fashion show in Istanbul. 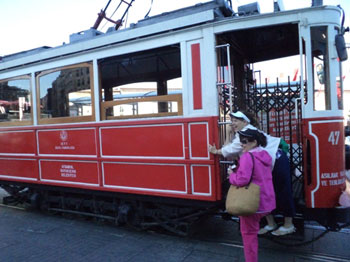 Not carried by a sedan but using the tramway running up and down Istaklal Street, I made my way on foot to the Pear Palace. The hotel was closed for nearly four years, undergoing extensive renovations but is now open again. No better place to get a feel for how people traveled in the past than sitting in the Orient Bar, enjoying a cocktail.

Room 411, all decorated in black and red, was Agatha Christie’s favorite room and it was here that she actually wrote her Orient Express mystery. But she isn’t the only famous person having frequented the Pera Palace. Signed photographs of Ernest Hemingway, Greta Garbo, Isadora Duncan and Jackie Kennedy to name but a few look down from the walls. Atatürk was also a frequent visitor, presiding over many a ball.

Even if I wasn’t able to afford a trip on the Orient Express or a stay at the Pera Palace, I could enjoy the atmosphere and easily imagine the past in these three marvelous Istanbul locations, all closely connected to the history of a legendary train.

Istanbul is a city worth a visit any time of the year. However, to avoid tourist crowds and really hot weather, the best seasons are spring and fall. Winters can be quite cold and rainy.

Trains to Greece, the Balkans and beyond still run from Sirkeci Gare. They may not be the Orient Express but you can travel very comfortably in the first class sleepers.

The Pera Palace has an excellent pool, spa and Turkish bath, using products especially made for the hotel in France. A day pass is available for approx. $100, which is a lot less than the average room rate.

About the author:
Inke Piegsa-quischotte is an ex-attorney turned travel writer and novelist. She writes for online travel magazines and has two novels and a travel guide to Galicia/Spain published. She lives between Turkey and Miami. She has just published a book, ‘Istanbul, City of the Green-Eyed Beauty’. Learn more about it here: www.glamourgrannytravels.com

All photographs are by Inke Piegsa-quischotte.