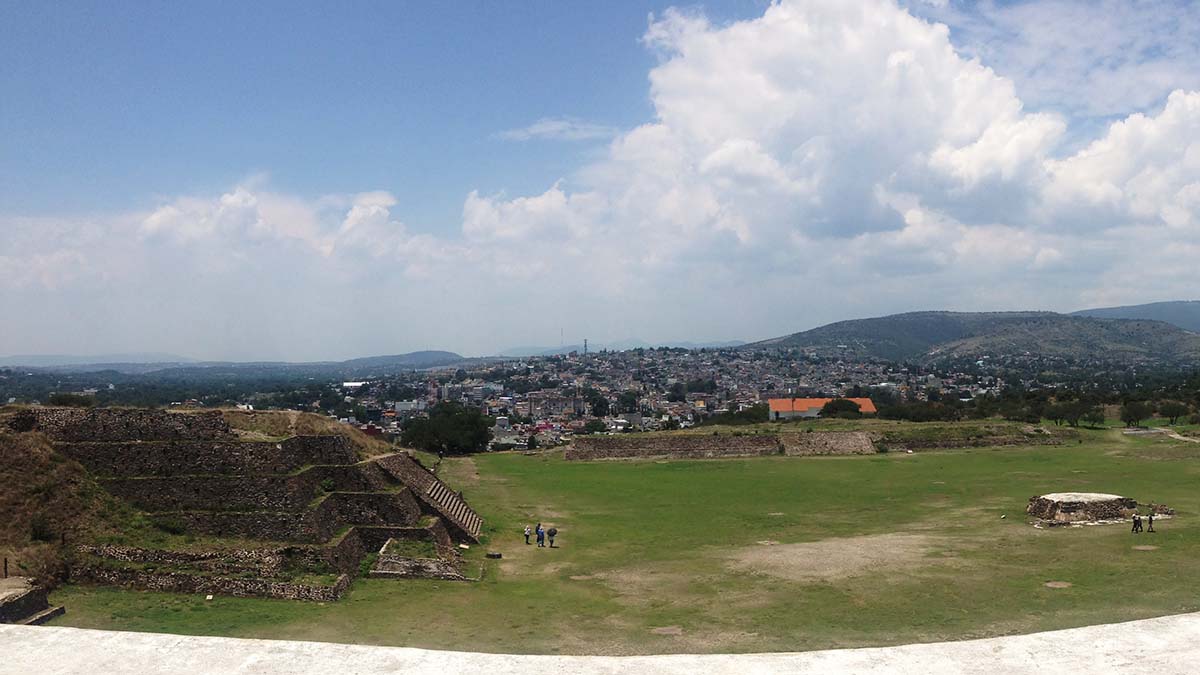 I must’ve taken a wrong turn after the ruined church, because I’d been walking for nearly 20 minutes, the mean sun of central Mexico burning my neck.

I turned onto a trail I hoped would lead me back to the Atlanteans, and I saw thousands of red slivers in the dirt in front of me. They were ceramic potsherds, most no bigger than my thumb, all nearly a thousand years old. This was the evidence of the scope of the Toltecs, their city so large fields of its debris were scattered for kilometers around the stone ruins.

Their ceramics are so common out in these woods that these tiny shards don’t even interest professional archaeologists. But I was interested. I picked one up and held it. Before I put it back down, I thought of the person whose thumb must have slipped along the lip when it was made.

Tula (sometimes called Tollan) outside the present-day city of Tula de Allende a couple hours away from Mexico City, was once home to the Toltec people.

When Toltec potters worked en masse here, a great power had recently fallen, the city of Teotihuacan. Toltec leaders used the power vacuum in the region to become the new leaders.

Compared to the people of Teotihuacan, the Toltecs were a flash in the pan. Teotihuacan was at its height from 200 CE to 750, whereas Tula began to grow in 900 CE and by 1150 collapsed from environmental and political pressure. But the Toltecs influenced cultures as far apart as the Maya at Chichén Itzá and the Aztecs, and their idols and monuments brought confusion and wonder to early archaeologists.

That confusion is clear in the lasting name given to the sculptures on top of Pyramid B: Atlanteans. 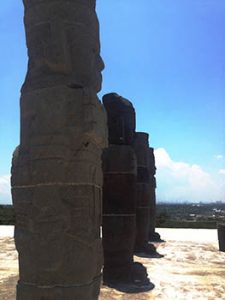 There is something almost otherworldly about the sculptures. Ethnocentric archaeologists who found similar sculptures at Chichén Itzá couldn’t believe the locals had made them. Easier to believe they came from a lost civilization of Europeans, the fabled philosopher-kings of Atlantis. While we now know they weren’t made by some mystic drowned merfolk, the name stuck.

Their butterfly pectorals are an example of how cultural metaphors do not always transition. We may think of butterflies as gentle and peaceful, but to the Toltecs, they were a symbol of war.

The Toltecs loved war. They may have brought heart sacrifice to the Maya region; if that’s true, the Maya had human sacrifice before the Toltecs, but they didn’t remove the heart. They certainly introduced the Maya to Chac Mool, a conduit between humanity and the gods.

Toltecs likely placed human hearts removed from warriors captured in battle on the plate Chac Mool held on his belly. Then they burned them. They also introduced other symbolism, like the great serpent god Quetzalcoatl. The feathered serpent may have been an allusion to a legendary or real Toltec king.

They also introduced the tzompantli, the terror-inspiring wall of skulls that, like heads on a pike outside a medieval castle, was probably meant to put the fear of the state in enemies.

It must have worked, because the Toltecs had been elevated to the realm of legend by the time the Mexica (one part of the Aztec Alliance) arrived on the scene. Mexica nobility even claimed descent from the Toltecs as a way of proving how dangerous they were. 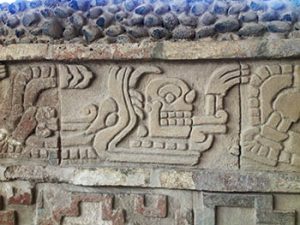 Compared to their predecessors the Teotihuacans, the Toltecs were no masters of pottery, despite the litter they left behind. Yet their masterful stonework inspired builders for a thousand miles around them. The old, deconsecrated temples they made still stand like sentinels staring down at contemporary Tula de Allende as though they’re still ready to send out the soldiers if necessary.

While stones have chipped away and columns have collapsed over centuries, the ghosts are still there and faithfully cared for by the folks at Mexico’s National Institute of Anthropology and History (INAH). Even on the day I visited, INAH workers were out hauling dirt and reassembling collapsed stone.

Tula may be most important for the place it occupied in history, not what it was or who its people were. Some archaeologists even believe the Toltecs didn’t exist, that someone else lived here. Whoever they were, they rose after the fall of Teotihuacan. They inspired the Aztecs and helped alter the Maya government at Chichén Itzá. 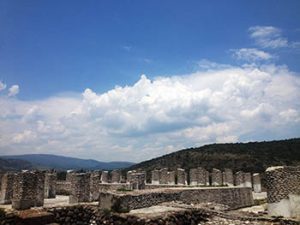 It was its own land, a unique culture with a unique outlook on the world and unique problems. This city was once home to as many as 40,000 people, whose lives have been reduced to the litter they left and the influence they had.

Today, their banners, streamers, and rich feather decorations rotted away, organic paints long gone, it’s hard to imagine those lives. But, like all the great archaeological sites, it is possible to blink at the top of Pyramid B and remember that you’re looking out at the same mountain they looked at, with the same type of scrub brush and cacti clinging to the side of it. Or maybe, you’ll turn a corner at Tula like I did and be able to put your thumb where a Toltec once put theirs.

As for the colonial-era church which also sits on the site, well, after years of traveling Mexico I’ve learned that the Spanish imprint can be as beautiful as the indigenous imprint. But there is something nice about seeing just how ruined the church is in comparison with nearby stone structures that have survived longer and better. Just don’t take a left at that church.

About the author:
Zach Lindsey is an Irish-American English as a Second Language instructor and student of historical linguistics. He is interested in the way architecture, stonework, and murals communicate cultural values. You can see more photos of art and architecture he’s seen on his journeys on archaeogato.tumblr.com.