The Maya flourished for centuries in the dry hot desert of the Yucatan Peninsula, establishing a society which has kept archeologists busy with study.

How? The presence of easily accessed underground fresh water. Huge caves and intricate tunnels filled with fresh water known locally as cenotes (see-NO-tays). These cenotes are numerous sinkholes, many connected by tunnels of varying sizes. Estimates range between 6,000 – 10,000, with only 2400 explored. 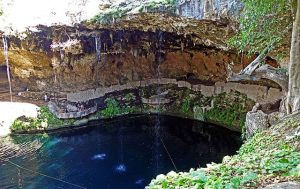 My first cenote visit was to Zaci, in the city of Valladolid which has developed a public park complete with a restaurant and excellent viewing platforms. These can be accessed for a small entrance fee of less than $1.00.

The damp permeated my nostrils with freshness cutting through the hot dry city air as I approached. The calls of hundreds of birds swarming this big hole in the ground foretold of the transition from the bustling town to an oasis of natural phenomenon.

Long tree branches grew out over the cenote edge, bending down toward the water’s surface one hundred feet below. I made my way down to the surface along an easy to negotiated combination of man-made and natural stone steps that spiraled along the cenote wall where birds flit about catching insects. This was just not quite enough to satiate my cenote interest. Now I was inspired to get underground to experience the beauty of the caves.

As the tour buses show up between 11 and 11:30 AM, I managed to view several sights without tour crowds by utilizing local transit, taxis and even hitch-hiking, to arrive by 8 – 8:30 am when most of the sites opened.

A bike shop near my hotel provided me with well-used clunker for $2, apparently the only bicycle that was available. It must have been the one he started his business with or it had some kind of sentimental value, because the owner was almost made me feel guilty to ride it, and followed me as I disappeared into the morning traffic even though I assured him that I would be careful with his ‘bambino’, as the crank smacked against the bearings and outside on the frame as I pedaled.

I pedaled the short ride west on the Carr. Costero Del Golfo, also known as Highway 180, then went left at the Hacienda Selva Maya onto Dzitnup. Timing was perfect. I wheeled into the sight just as the gates were unlocked. I was the first visitor.

I was forced to explain to the employees, with inventive, dramatic physical gestures and limited Spanish, my claustrophobia at the low-ceilinged entrance, but I passed through quickly without further stress into the entirely dark, damp space. An employee came behind and turned on the dim lights, exposing the most amazing sight — stalagmites with bats perched above a small lake covered by a great stone dome with a centre hole open to the world above. A few moments later a sharp beam of sunlight shot through the hole igniting the walls with extraordinary colours and inviting me to swim bravely alone into the eerie alcoves, bats flitting overhead and ‘blind’ fish bumping into my legs.

In order to go on organized scuba dives of the cenotes, one need only ask a at your hotel or read the tourist paraphernalia supplied on stands as the tours are numerous, the second largest attraction after the Mayan dwelling sites (perhaps third if one includes sun and beach activities). I met several guides who all spoke perfect English despite their varied ethnic backgrounds including one fellow with whom I played beach volleyball, embarrassingly not even realizing that he was Mexican until he told me. 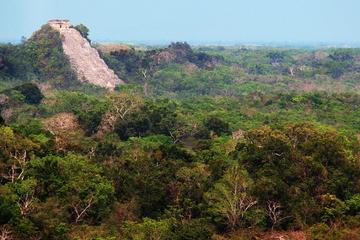 About the author:
Roger Howie is a Vancouver, BC based ‘performance artist / culture addict’. He has acted, danced, played music, recited poetry to his hearts content throughout western Canada. Living in Europe on NATO bases as a young teen developed this taste for culture and travel.