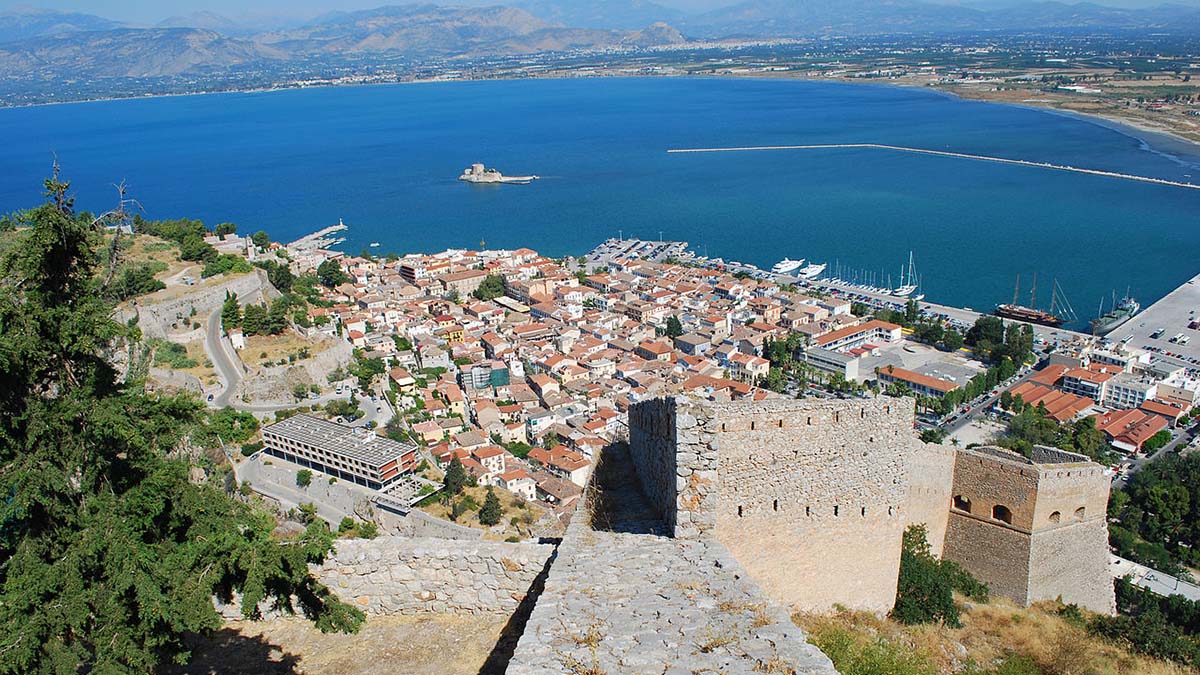 On my first visit to Nauplion [also spelled Nafplio], in 1978, I recall it only as a dusty little town dominated by an impressive citadel, with a small Venetian fortress out in the Bay. Recently, on a quest to explore Greece‘s medieval past, I decided to return there. What I learned was that Nauplion has been a fortified city since the Bronze Age, and an important part of Greece’s history of the struggle for independence.

I traveled by bus from Athens through scenic countryside and historic places such as ancient Corinth, the Corinth Canal, Argos (with it’s immense Larissa fortress built on the ancient agora of Argos, a conglomeration of Byzantine, Frankish, Venetian and Turkish structures). The bus route passes by ancient Tiryns massive walls dating to the Bronze Age. In the barren mountains nearby is Mycenae (Homer’s “well built Mycenae rich in gold”) where Agammenon’s palace stood. 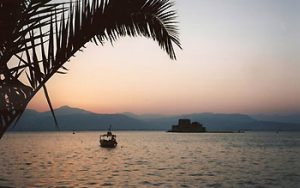 Located on the Argolic Gulf in the Peloponnese, Nauplion was the capital of Greece after Greek Independence. It has been a major port since the Bronze Age. Right across the Gulf is Argos, where Jason set sail in search of the Golden Fleece. According to one of the many ancient legends, Palamedes of Nauplion joined the expedition of armies who sailed against Troy. Odysseys accused him of being a traitor and he was murdered. For revenge, Palamedes’ father sent his other sons to seduce the wives of the Greek commanders. The plot apparently was successful as only one wife remained faithful to her husband: Penelope, wife of Odysseys. In the 7th century B.C. sided with Sparta against Argos. In retaliation, the King of Argos destroyed Nauplion and made it a naval station for his own city. 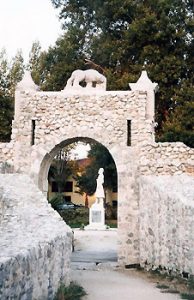 Nauplion’s main fortification is the Acronauplia, built by the Romans and Byzantines and later strengthened by a succession of conquerors including the French, Venetians and the Turks. Built on a peninsula, the Acronauplia was protected by a moat and a stronghold with vaulted ceilings and underground passages stocked with explosives. The gates of this citadel were decorated with an Arabian sword which supposedly belong to the first janissary to cross through when the Turks captured the city in 1715. According to legend, the sword dripped blood every Friday, the day the city was invaded.

There are three castles ruins in Nauplion, as well as elegant restored Venetian houses and gracious neo-Classical mansions. The narrow streets are lined with interesting shops and traditional tavernas. A seaside resort, it provides many things of interest to see and do.

The harbour is guarded by the Bourtzi, a small island fortress (left) built by the Venetians. The Venetians called Nauplion “Porto Catena” (the Chain Port) because a heavy iron chain stretched from the tower across the water, anchored in a bastion which was fortified with five cannons. Vessels hoping to enter the harbor had to pass by the chain and were caught in the crossfire. The Bourtzi was used as a fort until 1865 when it became the residence of the executioner.

Nauplion town is built up under the walls of the old Venetian castle, the Akronafplia Fortress, which has walls containing stones from the original Bronze Age citadel. Once the town was completely enclosed within its walls. The fortress was used as a political prison from 1936 – 1956, rather ominous given the starvation, torture and beatings these political prisoners were often subjected to. Now the prison is gone and in its place is a fancy hotel complex. The old town spills down the hillside under the walls. A paved walk skirts the promontory to the pebble beach where there are beach tavernas and accommodations for sun-bathers and swimmers. 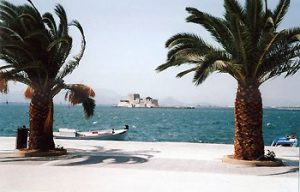 Every corner you turn in Nauplion is a photo-opportunity. First I went to the harbour to get a closer look at the Bourtzi, then I walked all around the promontory below the walls of the old castle, toward the beach. It was a blazing hot day but I didn’t let that daunt me, and walked until I was ready to drop before going back to my air conditioned hotel.

That evening I did more exploring by foot and hopped on the little motorized sight-seeing train for a look around the town. The train was full of Greek tourists. Children’s music played a tinkling tune and everyone sang along. It was fun, and a good way to see around the town. 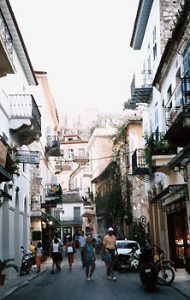 ater, at a cozy traditional taverna near my hotel I enjoyed a delicious meal: kalamarakia (squid) that melted in my mouth they were so fresh; patatas fourno (potatoes baked in the oven with cheese); horta (wild greens) and a bottle of very good retsina. All for 14 Euro.

The next morning I caught a taxi up to the imposing fortress of the Palamidi, named for Palamedes of the legend. The fortress is on a 216 m. high outcrop of rock overlooking the town. There are 1000 steps leading up to the gates. In spite of the heat a troop of people—men, women wearing high heel shoes and children, were making the arduous climb. 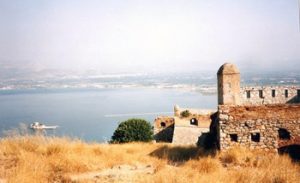 Within the citadel walls are three separate Venetian fortresses built between 1711 and 1714 but seized by the Turks shortly afterwards. Above the gates is the Venetian emblem of the Lion of St. Mark. This stone emblem appears in various places around the walls of the old castle too. During the War of Independence against the Turks, under the leadership of the venerable “klepht” (mountain fighter) Theodoros Kolokotronis (left), the citadel was besieged and finally won. Kolokotronis is said to have ridden his horse up the steep slopes of the Palamidi to celebrate his victory. One of the bastions is called “Kolokotroni’s prison” because he was later imprisoned there after being charged with treason in 1834. He was later pardoned and died in Athens in 1842.

I wandered around the spooky cell blocks, cave-like stone rooms with barred windows. Some of the smaller cells still had the iron rails on the walls were prisoners were chained. I wondered how many souls had perished there, or languished away their lives, and how many men had been jammed into each of those stone caves.

I followed the cobbled paths and climbed on the crumbling walls for hours before making the descent, inching my way down the steep, slippery stairs.

By then it was time to leave Nauplion. I hadn’t seen the museums, nor did I take the small boat out to the Bourtzi. That would have to wait for another visit. I had seen what I came to see, an important part of Greece’s historical past. 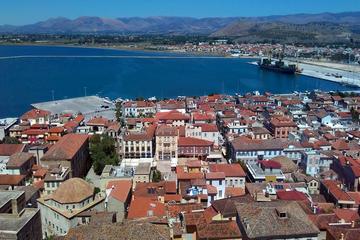 Buses run several times a day from Athens.
Accommodations: There are few budget hotels in the old town, but many available in the main part of the port. Several camp sites are nearby.
The Palamidi Fortress: Open daily 8 – 6:45 (summer) and 8 – 5 (winter) Admission: 2.35 Euro.
The Akronaplia Fortress: There is a lift up from the western edge of town.
The Bourtzi: Boats leave from the town provided there are at least 4 passengers. 1.50 Euro.

An exciting exploration of Peloponnese at ancient Corinth, Mycenae and Nafplio

About the author:
W. Ruth Kozak started visiting Greece in 1979. She lived there for several years and is a frequent visitor who considers Greece her second home. She’s lived on both Vironos (Byron’s) St. and Kolokotroni St. in Athens and combines her research field trips about Greek history and culture with her travel writing. You can read more of Ruth’s travel adventures on her blog:
www.travelthroughhistory.blogspot.com

Photo Credits:
First Nafplio photo by: Jeanhousen / CC BY
All other photos are by W. Ruth Kozak