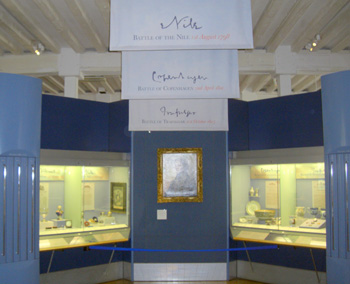 As the location of a Royal Navy naval base Portsmouth has a fascinating maritime heritage. There visitors can visit the Historic Dockyard, at Queen Street, which includes a variety of naval museums such as the National Museum Royal Navy Portsmouth. The museum documents the rich history of the Royal Navy from the age of sail, to the world wars and up to more recent conflicts in the Gulf.

The museum underwent substantial expansion in 2014.

A variety of recently added high-tech galleries tell the story of the Royal Navy from the dreadnought to present day maritime operations. The museum’s HMS Hear My Story galleries draw upon accounts, photographs, mementos and film from more than 1,000 Royal Navy naval personnel. The museum curator Matthew Sheldon stated, “Through our state-of-the-art interactive displays and exhibitions, we hope it will bring our collections alive – and into the 21st Century – for everyone to discover.”

So now the museum comprises of four primary exhibitions. At the front end of the museum is a Nelson gallery, which documents the naval career of the Royal Navy’s famous officer. The Sailing Navy exhibition covers the wooden ship history of the Royal Navy. Then there are the Babcock Galleries that amount to about half the museum. They include the HMS Hear My Story and Racing to War exhibition, which looks at the first few months of World War One’s naval engagements. 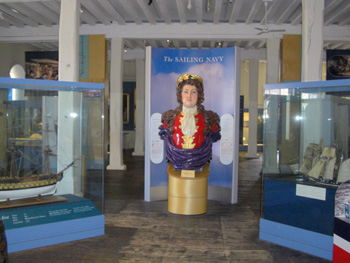 Nelson was a Royal Navy officer who won a number of naval battles during the Napoleonic Wars. In the Nelson gallery visitors will find artifacts from naval battles such as the Battle of Trafalgar, Battle of the Nile, the Battle of Cape St Vincent and the Battle of Copenhagen. There are a variety of artifacts such as pottery mugs, jugs, vases, pocket watches, porcelain cups and medals from those battles displayed in display cabinets at front of the exhibition.

Then visitors enter the Sailing Navy exhibition. There, there is a collection of wooden boat models. Among them are models of the HMS Nile, which was a 92 gun sailing battleship that saw active service in the Baltic during the Crimean War, HMS Endeavour and the HMS Kent. An interesting relic displayed in this exhibition is the HMS Conway’s Wheel. That was one of the relics saved from the ship when it went aground in the Menai Straits. Also displayed in this exhibition are Royal Navy swords and guns from the era, and a computer database shows visitors some of the key medals in the museum’s collection.

A small glass tunnel connects the Sailing Navy exhibition with the Babcock Galleries. In that tunnel there is a 4-inch gun from the destroyer HMS Lance. The Lance was a destroyer that opened fire on the Königin Luise minelayer off the Dutch coast just a day after Britain declared war with Germany in World War One. It sank the minelayer with the 4-inch gun in the museum. 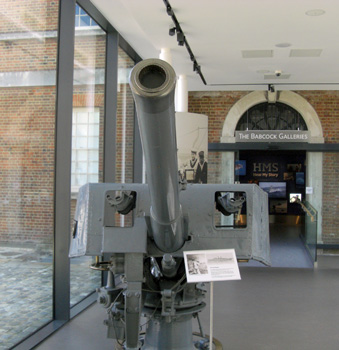 After passing through the tunnel, visitors enter the HMS Hear My Story galleries. The galleries include narratives which you can listen to with headphones. Those stories bring you closer than ever before to the real Royal Navy.

Within the galleries there is a small open cinema that runs the 15-minute film All of One Company. The film combines film, sound effects and testimonies that provide further insight on the Battle of Jutland, Battle of Atlantic and the Falklands War. Just in front of the All of One Company cinema is a smaller TV display that tells visitors about how the Royal Navy has shrunk in size, the locations of British Empire naval bases and when Royal Marine land battles took place.

However, the interactive timeline is perhaps the main highlight of the new galleries. That shows visitors a 20th/21st century timeline of the Royal Navy. The timeline provides details for Royal Navy battles and their other operations, which you can open with your fingertips. The table also includes ships that you can move across the virtual oceans. 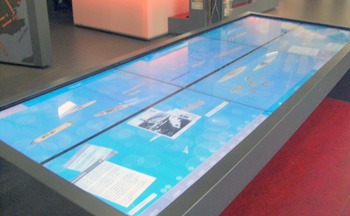 There are a number of display cases within the galleries showing artifacts from numerous battles and wars. Among them are a Battle of Jutland, Battle of Atlantic and Falklands War display cases. The Jutland case displays a silver model of the HMS Iron Duke, a telescope used during the battle and the remains of a German armor-piercing shell fired at the HMS Tiger among other artifacts

The Changing Technology section of HMS Hear My Story galleries has a couple of touch-screen games. In those games players detect submarines with sonar pulses and sink them with depth-charges. That section of the museum also showcases a Bofors Gun Mark 1, which was one of the Royal Navy’s most effective anti-aircraft guns in WW2.

Undoubtedly, the new Babcock Galleries have transformed the National Museum Royal Navy Portsmouth into a much more exciting museum. It is situated at the Historic Dockyard just opposite the HMS Victory, and has a Ł13 admission fee. The museum is open from 10 a.m. to 5 p.m. during the summer, but closes at 4.15 p.m. in the winter. After leaving the National Museum Royal Navy Portsmouth, visitors can also check out some of the other great museums at the dockyard. 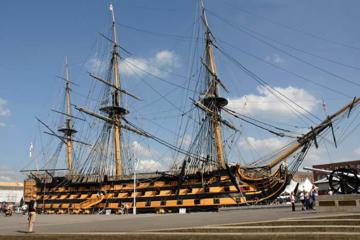 About the author:
Matthew Adams is a freelancer who has produced a variety of articles for various publications and websites such as Swing Golf Magazine,TripAdvisor, Coed Magazine the Washington Post and Vagabundo Travel. Matthew is also the author of Battles of the Pacific War 1941 – 1945. Check out the book’s blog at battlesofthepacificwar.blogspot.co.uk

All photos are by Matthew Adams: