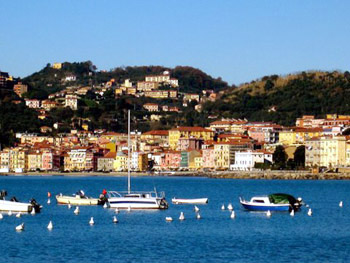 Italia! Oh Italia! Thou who hast the fatal gift of Beauty,”

Nowhere does Byron’s tribute to Italy ring more true than in “The Gulf of Poets” on the Ligurian coast, where Percy Bysshe Shelley was drowned in 1822. It is said that the spirit of the English Romantic poet still lives on between the inlets and promontories of this bewitching cove. It is easy to see why.

Stretching from Lerici to Portovenere, in a succession of beaches, jagged coastlines, crystalline waters and raw nature, the Gulf of La Spezia’s literary nickname derives from the attraction the area has had for writers, painters and artists, including Percy and Mary Shelley, Lord Byron, D. H Lawrence, George Sands, Henry Miller and Virginia Woolf. 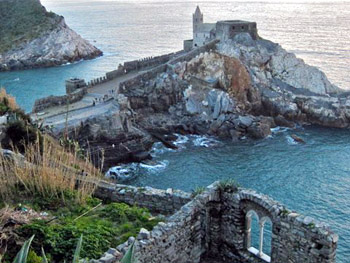 Percy and Mary Shelley arrived in the tiny seaside village of San Terenzo in 1819 and rented a villa known as “Casa Magni”, whose whitewashed walls and arched colonnade can be found on the promenade. “A lonely house close by the soft and sublime scenes of the Bay of Lerici”, is how Shelley described the villa in his letters. These lines are inscribed on the walls of the now uninhabited villa, along with “I still inhabit this Divine Bay, reading dramas and sailing and listening to the most enchanting music.”

The Shelleys were often visited by Lord Byron, who resided nearby in Portovenere, supposedly in a cave. Byron is said to have swum the incredible 7.5 kilometre distance just to visit his dear friends. Standing at the bottom of “Byron’s grotto” which bears a plaque commemorating “the immortal poet who as a daring swimmer defied the waves of the sea from Portovenere to Lerici.” staring out over the rocks which peer up from the sea, it would seem this story is rather far-fetched, although the romantic in me chooses to believe. As night falls, the grotto takes on an eerie atmosphere, rocks transform into monstrous figures and it is easy to see how the poets found their muse in this stirring landscape. Byron is believed to have written his poem “The Corsair” in the grotto itself. 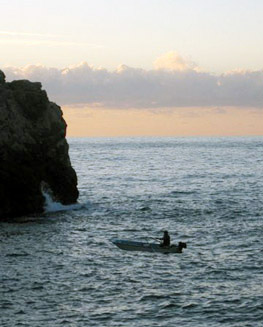 A sprinkling of brightly coloured houses line medieval streets that wind up to Lerici’s castle, which overlooks the entrance to the Gulf of Poets. The castle is thought to be the inspiration for Mary Shelley’s “Frankenstein.” Nowadays the castle contains a museum of palaeontology.

Shelley composed some of his most beautiful lyrics and songs in this area including “Lines written in the Bay of Lerici” and was working on “The Triumph of Life” at the time of his tragic drowning. Sailing from Livorno to San Terenzo, his boat named “Don Juan” by Byron, but referred to as “Ariel” by the Shelleys, was sunk in a severe storm. The bodies of Shelley and his two English companions, Edward Ellerker Williams and Charles Vivien, were washed up on a beach near Viareggio and cremated in the presence of Byron, and friends Leigh Hunt and Edward Trelawny. A copy of Keats’ poems was found in Shelley’s jacket pocket. According to legend, Shelley’s heart refused to burn in the flames and the ever-audacious Byron plucked it from the embers. 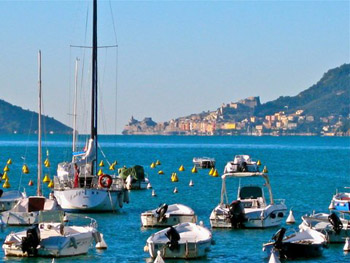 Shelley’s’ ashes were stored in the wine cellar of The British Consul in Rome before being buried in The Protestant Cemetery in Rome, where John Keats was laid to rest just a year before. After Mary Shelley’s death, her husband’s heart was found wrapped in a page of “Adonais”, Shelley’s famous elegy to Keats. Shelley’s heart was eventually buried in St Peter’s Churchyard in Bournemouth, Dorset.

Walking along the coast from Lerici to San Terenzo, the incandescent extent of the waters, reflecting the pastel colours of the attractive buildings, bring to mind Mary Shelley’s words “O blessed shores, where Love, Liberty and Dreams have no chains.” 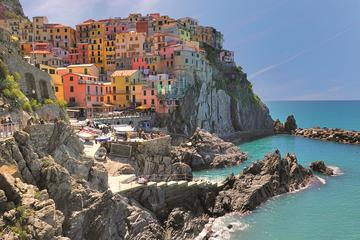 The best of Cinque Terre & Portovenere with Typical Ligurian Lunch

The nearest airports are Pisa and Florence.
♦ Lerici can be reached by ferry from La Spezia, Portovenere and The Cinque Terre. Ferries run from 1st April. There’s a scenic drive from La Spezia and there’s a large car park etween San Terenzo and Lerici. A shuttle bus runs between the two, but it is a short walk to either village.
♦ Portovenere can be reached by ferry from La Spezia or Lerici. There is a bus from the train station in La Spezia.
♦ The Gulf of Poets can get very crowded in high season. Best times to visit are Spring and Autumn.
For details on accommodation, restaurants and other travel information:
♦ www.portovenere.it
♦ www.rivieradellaliguria.com 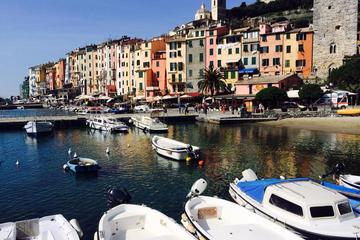 About the author:
Sarah Humphreys has been writing since she could hold a pencil. She is originally from near Liverpool in the UK but she’s lived in The USA, Greece, The Czech Republic and Italy. She’s been living in Pistoia, near Florence for 15 years, where she teaches English. She is passionate about poetry, Literature, music and travel.

All photos are by Sarah Humphreys:
San Terenzo
Looking down over ‘Byron’s Grotto’ and the Castle at Portovenere
Sunset over the Gulf of Poets
Lerici harbour looking towards PortoVenere