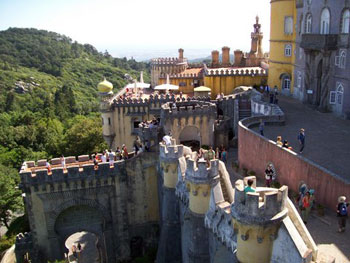 ‘perhaps in every respect the most delightful in Europe… a glorious Eden.’
– Lord Byron.

‘the most blessed spot on the whole inhabitable globe.’
– Robert Southey. 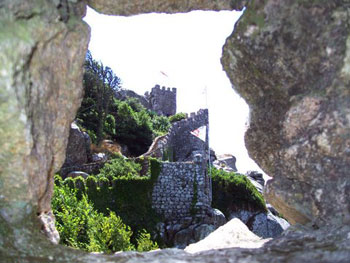 Looking south standing under a mountain-top cross surrounded by lush vegetation in Sintra’s Romantic-period Pena Palace park I wondered if the human construction in the distance was Lisbon. Then I saw a red bridge glinting in the sun, confirming it was Portugal’s capital city twenty-five miles away on the Tagus estuary. It could have been the Golden Gate bridge signalling San Francisco, but I was a long way from California; and the previous day I’d passed the 25 April bridge and a Rio-style Christ statue on the way to Belem, where Portuguese sailors departed on their most famous voyages of discovery.

Turning around, I took a last look at the breathtakingly colourful and elaborate palace from its level. It was also visible from Sintra town, and the Sintra-Lisbon train; and is said to be visible from Belem on a clear day. Perched atop a mountain containing trees from around the world, the palace looks like a Disney castle resting in an environmentalist’s dream.

Although Sintra may have had a more natural beauty when Byron and Southey visited, it must look more impressive now; as the palace and its park were only built to their current gothic fairytale brilliance after the poets had departed. It wasn’t until 1838 that King consort (to Queen Maria II) Ferdinand II bought the land, which at the time housed a modest monastery. The royal couple employed Baron Wilhelm Ludwig von Eschwege to build the castle; to be used as a summer residence to escape the heat of Lisbon. It was completed in 1854, and became a UNESCO World Heritage site in 1995. 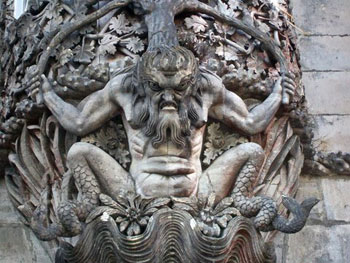 A half-fish, half-man statue; an allegory for the creation of the world; greets visitors to the central courtyard of the Pena Palace. Entering the Manueline Cloister to view the living quarters, the sun was almost directly above a tall green plant rising out of a grey turtle-stoned pot in the centre of the unroofed inner courtyard. Upstairs, we could walk past the open bedrooms, which were surprisingly small; and through the communal rooms, which were as stylish as expected. Other highlights of the palace included the small ancient chapel, the Great Royal Hall and the kitchen; the latter now houses a cafe, with an outside terrace.

It was from there that I saw the cross on the mountain’s southern peak, and decided to walk over to it. There were several paved paths through a park filled with over 2000 species of world trees and plants; from North American sequoia to New Zealand ferns. There are also several small lakes, resting places, caves and viewing points. 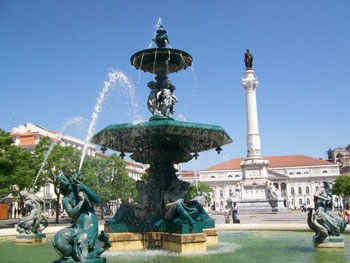 On the way up to the palace I had visited the Moorish Castle. It is now mostly just a long wall with towers above foundations being archaeologically excavated, but it still inspires the imagination, and provides the best views on the mountain of Sintra and the northern plain. The castle was built in the eighth and ninth centuries during the Moors’ occupation of the region, before Portuguese forces regained control in the eleventh century. You can buy tickets for both the castle and Pena Palace at the castle entrance. The castle provides a good break if walking from Sintra to the palace. There are also regular buses. 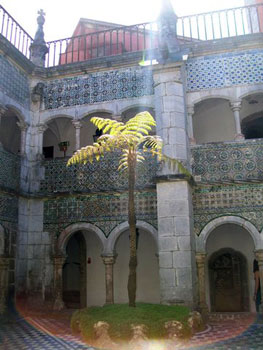 Lisbon’s train station for Sintra is the Rossio, which is conveniently also the city’s most central. Sintra was the only time I used the train service in Lisbon, as I travelled between Lisbon and the south coast by bus; the Eva service was comfortable and punctual, but there were no toilets or rest-stops on the three-hour journey.

Arriving in Lisbon, its urban sprawl rising up steep hills was both impressive and daunting as the bus carried us over the Tagus on the ten-mile long Vasco da Gama; Lisbon’s other main bridge and Europe’s longest. Lisbon’s 500,000-population rises to three-million when including its outer districts. The bus dropped us off at a station on the northern edge of the city, with a large metro station underneath. I took a train to Chiado, where I’d booked two nights in a cheap hostel, after mastering the ticket machine. The machine has an English language option, and you need a day-card as well as a destination ticket.

After exiting the metro I asked a passing woman if she knew where Praca Luis de Camoes was, as that was the square on which the Royal Lisbon hostel was located. She looked at me with puzzlement in her eyes, before smiling and repeating Camoes with a ‘Camush’ pronunciation, and then said it was over the other side of the metro. So, not only did I receive directions, but I also learnt how the ‘ush’ sound I’d noticed all trip was used. It still took a little while to find the hostel, as it was in too good a position: overlooking the square rather than down a side street. Friendly staff, plush furnishings, music in the bathroom and a bumper buffet breakfast just added to the hostel’s charms. 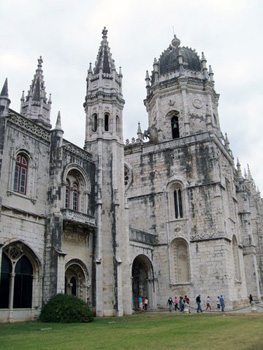 The Chiado is a popular area of Lisbon, between the city centre; Baixa; and the Bairro Alto district. The latter’s narrow cobbled streets and balconied houses ooze age and character. Everything is in easy walking distance, with the Baixa’s plazas interconnected by picturesque streets, squares and statues. The area was rebuilt after a big earthquake in 1755. Restaurants with smartly dressed waiters and waitresses frame the plazas, continue up the eastern hill towards St. George’s Castle, and down to the Tagus a few blocks to the south.

On the day in-between arriving and going to Sintra I took a tram from near the Baixa riverside out to the western parish of Santa Maria de Belem (a translation of Saint Mary of Bethlehem). It is an area famous for its monuments and museums, and the place where Portuguese sailors departed on their greatest voyages of discovery. The Christ the King statue dominates the southern riverside’s hills, above the 25 April bridge’s high red towers. White-sailed boats passed effortlessly under the suspension bridge on an uncharacteristically cool and cloudy summer day; while parks and cycle tracks were busy with Sunday morning sportspeople. 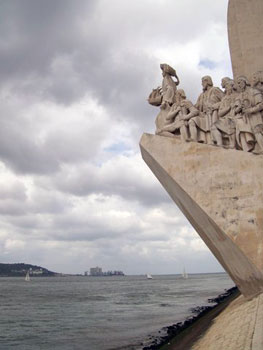 Maybe the sailors sometimes imagine they are Henry the Navigator or Vasco da Gama as they sail out to sea. Henry was a 15th century royal who is credited with being instrumental in developing Portugal’s most rewarding era of exploration and trade. His statue looks out over the Tagus at the head of the impressive Monument to the Discoveries. Behind him are thirty-two notable figures from that era, with sixteen on each side of the caravel-shaped structure; the caravel boat revolutionised Portuguese sailing after being designed with sponsorship from Henry.

Vasco da Gama is probably the most famous of the sailors on the statue. While Christopher Columbus was looking for a western passage to the East Indies for the Spanish king and instead discovering the Americas, Vasco da Gama led the first European naval expedition to reach India in 1498. The route around the south of Africa had been pioneered by another Portuguese sailor featured on the monument; Bartholomew Diaz sailed around the cape in 1488, and wanted to continue to India, but his crew refused.

The other highlight of Belem is the Belem Tower, which was built in the early sixteenth century to guard the Tagus entrance. The small fort juts out into the river, and looks straight out of a pirate film. However, it doesn’t come close to matching the Pena Palace, so if you’ve got time; and especially on a clear day; it’s worth making the short journey out to Sintra.

About the author:
Marc Latham traveled to all the populated continents during his twenties, and studied during his thirties, including a BA in History. He now lives in Leeds, and is trying to become a full-time writer from the www.greenygrey.co.uk website.

All photos are by Marc Latham.
See more at: picasaweb.google.com