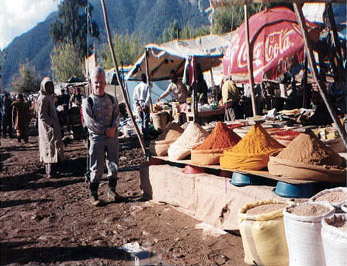 It was November, and the rainy season had begun in Morocco. The day before our trekking group arrived at the Ourika Valley in the foothills of the High Atlas Mountains, a flash flood had swept down the dry wadi gouging away great chunks of the road and gnawing at the foundations of the mud-build Berber houses that perched precariously along the river bank. 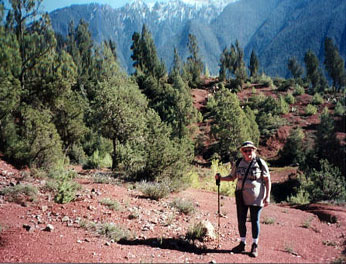 My Moroccan trekking adventure had begun from the beautiful city of Marrakech that nestles like a rose-quartz gemstone near the foothills of the snow-capped High Atlas Mountains. Our first trekking destination was the Ourika Valley. When we arrived at the starting point, we were forced to leave the van walk to the meeting point as the roads were impassable. We had to teeter across foot-wide Berber bridges fashioned out of sticks, suspended over the rushing white water and squeeze behind houses on uneven slippery pathways meant only for goats. In places where the road had washed away the mud-brick houses overhung precariously over the river bed . 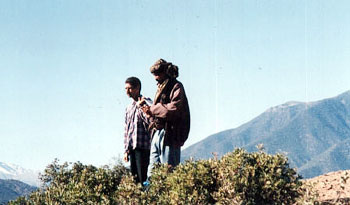 The circle trip up the Ourika Valley took six hours, a total of just over seven kilometers. By the time we arrived back to where we had started, some of the road had been cleared. A van waited for us to take us back to the restaurant where our driver would be waiting. It was a ramshackle vehicle, the cabin gutted, with wooden benches along each side. Our group of fifteen trekkers and the tour leader crammed into the back. The driver, his companion and the Berber guides sat in the front and one other man stood on the back bumper. Amazingly, twenty people scrunched into a space that was meant for ten. In places, there was barely enough road left for the van to manoeuvre by. Miraculously we made it to the end of the road construction where our mini-van was waiting to take us back to Marrakech.

AMIZMIZ SOUQ AND A TREK ON THE FORESTRY ROAD 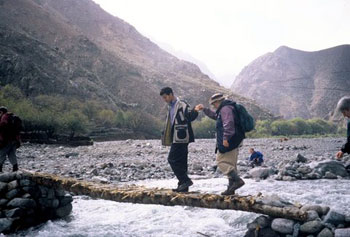 Early the next morning, we set off for a visit to the Berber market at the town of Amizmiz. A Moroccan souq is a total sensory experience. We were greeted by a cacophony of sounds: goat bells, braying donkeys, merchants calling out their wares and shoppers haggling, coppersmiths and blacksmiths hammering. The souq is comprised of very small shops and canopied stalls selling fish, meat, poultry, and locally grown fruit and vegetables, sacks of mint tea, nuts and dates. Spices such as saffron, cumin, ginger and cinnamon are displayed in colourful cone-shaped piles. The smells of mint, spices and baking foods fill the air with a mouth-watering fragrance. In one lane the barber shops were doing a brisk business. Men can get a shave and haircut while their wives bargain in the market. In another lane a man tends the barbecue coals under a dozen cone-shaped clay tajine pots containing chicken or lamb stewed with eggplant, carrots, onions and raisins in savory spices, to be served over steaming plates of couscous. Dinner’s ready when your shopping’s done!

Leaving the Amizmiz souq, we headed up into the mountains on a well-maintained forestry road. Here the villages are different from those in the Ourika Valley. Tiered on the mountainside, their ochre clay walls almost make them invisible in the mountain landscape. There are well-irrigated terraced gardens and lemon and olive groves. The road is lined with eucalyptus trees; the mountain slopes rocky and arid. The scent of lavender and thyme makes the air fragrant and the walk pleasant.

A WALK IN THE ASNI/OURIGANE FOOTHILLS 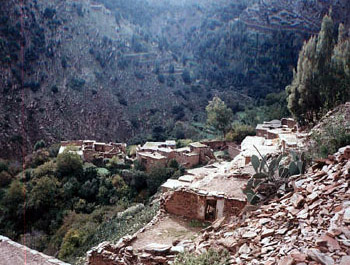 The next morning we set off for another trek to inspect a higher route along the ravine above the River Ourigane. Instead of attempting the more difficult climb up into the mountains with the rest of the group, I opted to cross the valley on the Berber trails instead and was provided with my own personal guide, Mabourak.

The countryside is stunning with its shrub-covered knolls and rich sienna-red earth. Because my guide was well informed about the flora and fauna of the land, our walk became a geology and botany lesson. Minerals abound in the area and I collected agate, flint, hematite and bits of lapis lazuli. Mabourak showed me wild garlic, thyme and other herbs and wild flowers. Low bush juniper and quince grow in abundance. In the reforested juniper groves wild boar are hunted. Other animals such as fox, mountain sheep and goats, and jackals roam here. There are many wild birds too, such as eagles, hawks, cuckoos and pheasants. The trek with Mabourak, was the highlight of my Moroccan adventure. I was glad that I’d had that time alone to absorb the beauty of the countryside and get acquainted with one of the locals. 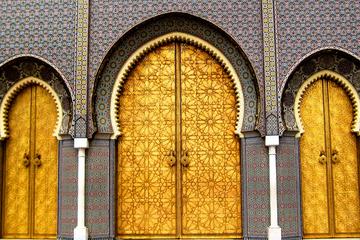 Currency in Morocco is the dirham. $1.00 U.S. = 7.91 dirham.
Passports valid from six months of issue are necessary but no visa is required. You must show a return ticket. It would be wise to check the travel immunization clinic before leaving and take along medication for stomach upset.
Travel warning: Be aware of pick-pockets and backpack slashers in crowded markets. If you enter the souks with a guide or hustler the price of everything you buy will be increased to include a commission for them, often as much as 40 per cent. Be prepared for the attentions of faux-guides.
Guides: Licensed guides can be hired for about $30 Cdn a day for sight seeing in the city or trekking in the country.
Clothing: It is advised for both female and male travellers to dress modestly to avoid hassles.
Taking photos: Vendors and performers in the souks expect to be paid. Many Moroccans don’t like having their photos taken so be discreet when doing so.
Tour groups: There are various tour companies offering group tours and treks. I went with Ramblers Holidays from London Eng. www.ramblersholiday.co.uk.
Where to stay: For hotel information: www.wtgonline.com
Or contact: Federation Nationale de l”Industrie Hotelieri, Angle Ave Nado et Rue 3, Quartier Polo, Casblanca 20550 fnih@iam.net.ma www.fnih.ma
Other Accomodation: There are well-organized campsites, youth hostels, self-catering suites and hotels of all categories available in Morocco. See www.travel.yahoo.com for more information on hotels.

About the author:
This trek in Morocco, made with a group of Ramblers from England, was a highlight of Ruth’s travel adventures although she preferred the more leisurely walk with just the guide than the group trek which tended at times to be like a road race.