by Ron Ellege
What do dancing young people, senior sojourners, and Pope Francis have in common? The Basilica of Santa Maria Maggiore in Rome, Italy.

When in Rome, our go to hotel is the Mecenata Palace which is a worthy refuge of elegance, located atop Esquiline Hill. The hotel is directly across the street from the Basilica, and our requested room provides an unobstructed view of the church. 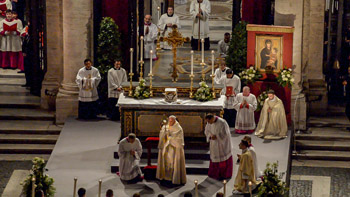 Over the years we have watched groups gather at twilight for the beginning of their pub crawls. Dividing into teams, they guzzle through drinking games in the piazza while preparing for their evening of revelry. We have observed crowds gather for marches, tours, protests and rallies. From blurry eyed, early morning senior groups touring the Basilica, to high-spirited youth groups assembling to sing and dance in the square, this church is a well celebrated gathering point.

Importance and Prestige of this Basilica 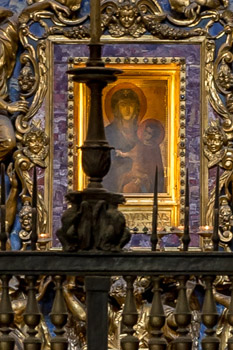 There are over 25 churches in Rome dedicated to Mary, Santa Maria Maggiore is the largest of these Marian churches. This Major Papal Basilica is prominent in the tradition and adulation of the Catholic community worldwide. Many travel blogs rate Santa Maria as one of the ten most beautiful churches in Europe. Walks of Italy tour Major Basilicas of Rome, includes it as one of “the three most important churches in Rome.” Frommer’s rates it #3 in its article; “The Best Churches.” If you are a cathedral buff, Italy is not complete until you have experienced this great lady.

Located on Esquiline Hill, one of the ancient “Seven Hills of Rome,” the present Basilica dates back to the fifth century AD. It was constructed between 432 and 440 to celebrate the major output of the 431 Council of Ephesus. In Catholic tradition, the Basilica is an attestation of the importance of the Virgin Mary as the Mother of God.

This Basilica is Rome’s only remaining example of early Christian architecture whose core structure remains as it was 1600 years ago. Step in the door and wonder surrounds you, grand and modest – simple yet extravagant, art which captures the eye is witnessed in every direction. The mosaics found in Santa Maria Maggiore are among the oldest representations of the Virgin Mary in Christian Antiquity. Revelations of human thought, presented through combinations of differing styles of mosaic expression.

The Nave and Triumphal Arch 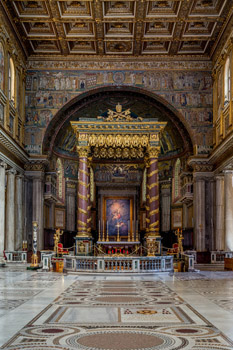 The golden mosaics adorning the triumphal arch date from the 5th century and depict scenes from the early life of Christ and the Virgin Mary. On the left at the top is a panel depicting Christ’s enthronement with a group of angels as his court. Below this is the Epiphany or Adoration of the Magi. The young Christ is seated on a throne with Mary on his right, they are attended by angels.

Panels on the Right side of the triumphal arch include the Presentation in the Temple; the Flight into Egypt; Herod visited by the Magi; the city of Bethlehem. The top center panel displays a circle containing the apocalyptic throne of Christ with the Book of the Seven Seals, flanked by St. Peter and St. Paul. 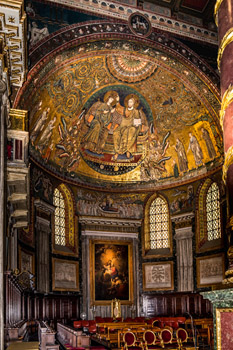 Italian painter and mosaic maker Jacopo Torriti is credited with the adornment of the apse, he crafted it in 1295. The magnificent central work shows the Coronation of the Virgin in which Jesus and Mary are seated on a throne with Jesus placing a jeweled crown on Mary’s head. The sun and moon are under their feet accompanied by a choir of adoring angels. Standing to their left are St. Peter, St. Paul, St. Francis of Assisi and Pope Nicholas IV. Standing on the right is St. John the Baptist, St. John the Evangelist, St. Anthony and Cardinal Colonna. The apse of Santa Maria Maggiore is the most important surviving example of Roman mosaic art from the late middle ages. Descend below the high altar and you enter the burial place of Saint Jerome, this 4th-century saint translated the Bible into the Latin language (the Vulgate). Upstairs, located in the Borghese Chapel, is “Salus Populi Romani,” believed to be the oldest Marian image in Rome. However, on display in this vault is arguably the most important artifact of the Basilica, The Reliquary of the Holy Crib. This crystal shrine, designed by Giuseppe Valadier, is said to contain wood from the Holy Crib of the nativity of Jesus Christ.

The Legend of the Snowfall 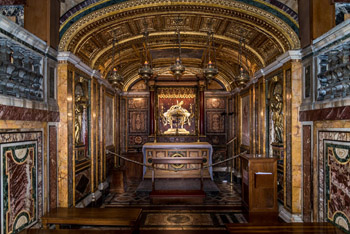 Legend has it that an aristocrat named Giovanni, and his barren wife were without child. Seeking divine intervention they committed to build a church to the Virgin Mary. She appeared to them in a dream on the night of August 4, 352 A.D. and told them that a miracle would show them the location on which they were to build the church. That night, Pope Liberius was troubled by the same dream. On the following morning, he travelled to Esquiline Hill and found it miraculously covered in snow. Liberius then traced an outline for the location of the planned church. Although many feel this legend has little basis in fact, to this day the church on Esquiline Hill is often referred to as Our Lady of the Snow. 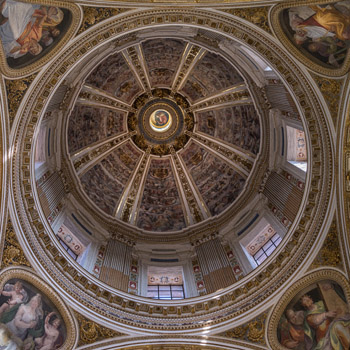 1. The opulence of its décor.
♦ This gem will keep your camera snapping and your eyes twinkling from the grandeur of its marble floors, tapestries, mosaics, statues, tombs and relics.
♦ Its spectacular ceiling is said to be decorated with gold which Columbus transported from the new world.

2. The freedom to move about with little crowding
♦ Check the schedule for special occasions and visit any other time.
♦ Only on rare occasions is this venue crowded.

3. Proximity and ease of access
♦ A four block walk from the main train station and Termini Underground.
♦ The city bus stop is on the corner of the piazza
♦ A scheduled stop for all Hop On Hop Off tours
♦ Only a ten minute walk from the Colosseum.

4. It’s FREE! There is no cost of admission
♦ Stay as long as you want, return as often as you please.

5. Its prominence and status among Rome’s churches
♦ Santa Maria Maggiore is one of the Seven Pilgrim Churches of Rome
♦ It stands among the four patriarchal basilicas

Maria Maggiore is listed as a “Top 10 Attraction” and “Must See Venue” in most major guide books, including Rick Steves’.

Expect to spend several hours in this grand Basilica and by all means, bring a camera. Guided tours can be arranged through many of the local or world-wide guide services such as Frommer’s or Walks of Italy. Self-guided tours, complete with audio guides are available in the vestibule. For information visit their official website.

How to get there: get off at the stop termini of the underground; take via Cavour southwest 4 blocks, the Basilica is on your left. The Basilica is located on the square with the same name – Piazza di Santa Maria Maggiore also referred to as Piazza dell’Esquilino.
Address: Piazza di S. Maria Maggiore, 42, 00100 Roma RM, Italy
Phone: +39 06 6988 6800

Link for GoogleMap is HERE.

About the author:
Ron Elledge is a Freelance Writer/Photographer. You can see some of his work at these sites:

All photos are by Ron Elledge.