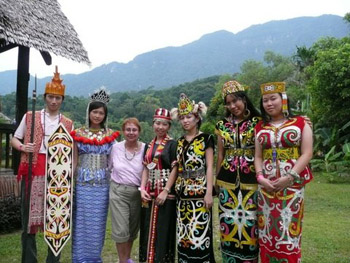 by Lenora A. Hayman

The 10th Anniversary of the annual, three-day Rainforest World Music Festival (RWMF) was held in mid July 2007 in the Sarawak Cultural Village in Santubong, 45 minutes drive outside of Kuching, Sarawak on the northwest coast of the island of Borneo. 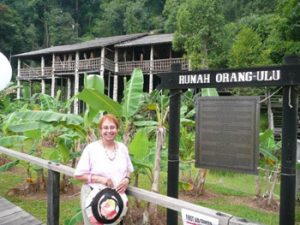 I toured aboriginal homes, including the Orang Ulu iron-wood longhouse of the central Borneo Kayan, Kenyah, Kelabit and Lun Bawang tribes that are built on tall poles, allowing a bird’s-eye view of approaching enemies. There was also a Bidayuh and an Iban Longhouse, Penan Hut, Malay House, Chinese Farmhouse and a Melanau Tall House.

In the Melanau Tall House, Rose Anthony showed me the process of producing sago. The sago palm trunk’s pith is removed and these shavings with water are stomped on, in a large basket, allowing the sago starch to drain through. The gel is dried on mats and rolled into white pellets. Rose cooked me delicious warm sago wafers on top of the stove. 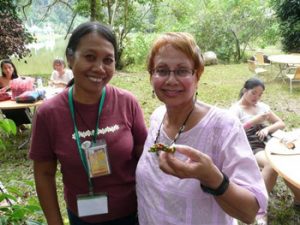 I was also shown a 12 foot pepper tree at the Chinese farmhouse. Orange and yellow cayenne pepper corns are soaked for two weeks to soften and eliminate the outer skin. The white seed is dried in the sun for one week and white pepper is the result. (right)

Ten years ago, two Canadians, Randy Raine-Reusch, a multi-instrumentalist specializing in wind and string instruments from East and Southeast Asia, and Robert Basiuk, former deputy chief executive officer of the Sarawak Tourism Board, initiated the Rainforest World Music Festival. It is based on the Winnipeg and Vancouver International Folk Festivals with afternoon workshops, up close and personal, with the musicians, followed by evening shows. This year over 23,000 music lovers enjoyed 20 groups from 17 countries including Malaysia and Sarawak. 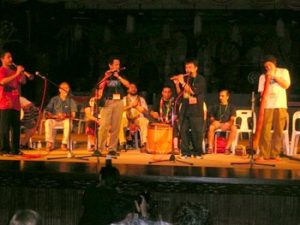 The Doghouse Skiffle Group from Hull, England explained that after the Second World War there was little money for musical instruments so Lonnie Donegan, the Beatles etc. formed bands using washboards, for percussion, tea-chests with a broom-stick and string attached to sound like a double base (called the doghouse bass) and a guitar.

In the evening there were television screens beside two stages, allowing acts to perform alternately without a break. It was magical, sitting on the ground under the stars, with a happy, international crowd and a Malaysian gliding colugo leaping, like a flying squirrel, from tree to tree.

Dressed in red-beaded costumes and skull caps, the Kelapang Kelabit Bamboo Band and the Anak Adi’ Rurum children, a branch of the Orang-Ulu tribe of Sarawak produced wonderful sounds including hymns from bamboo flutes.

The Black Umfolosi group from Zimbabwe with hard hats and gumboots sang wonderful a capella and with great frenzy, loudly slapped their bodies and pounded their boots while dancing and catapulting into the air. Gumboot dancing began in the flooded South African gold mines during the migrant system. Speaking was prohibited so messages were dispatched via smacking gumboots and shaking ankle chains.

The Mah Meri is one of the 18 ethnically defined tribes of the Orang Asli living along the Malaysian Selangor coast including Carey Island. These fishermen and woodcarvers believe in ancestral spirits. Dressed in bark cloth, grass skirts and magnificent masks they performed for the first time in public, the sacred dance honoring their ancestors.

Thanks for a fantastic, fun time!

About the author:
Lenora Airini Hayman was born in New Zealand and has lived in Vancouver B.C. for 43 years. She’s been a volunteer since 1984 with the Disability Access Committee for the Vancouver International Folk Festival and was thrilled at the opportunity to attend the Rainforest Music Festival. She is a freelance travel/food and wine writer. Her assignments have taken her to the jungles of Borneo to investigate orangutans, Taiwan to study 13 indigenous tribes and the French Polynesian Islands of the Marquesas to research the original tattooing of the Polynesians who settled there 500 years before the Maori. Contact: itravellen@shaw.ca

Photo credits:
All photos by Lenora A. Hayman.